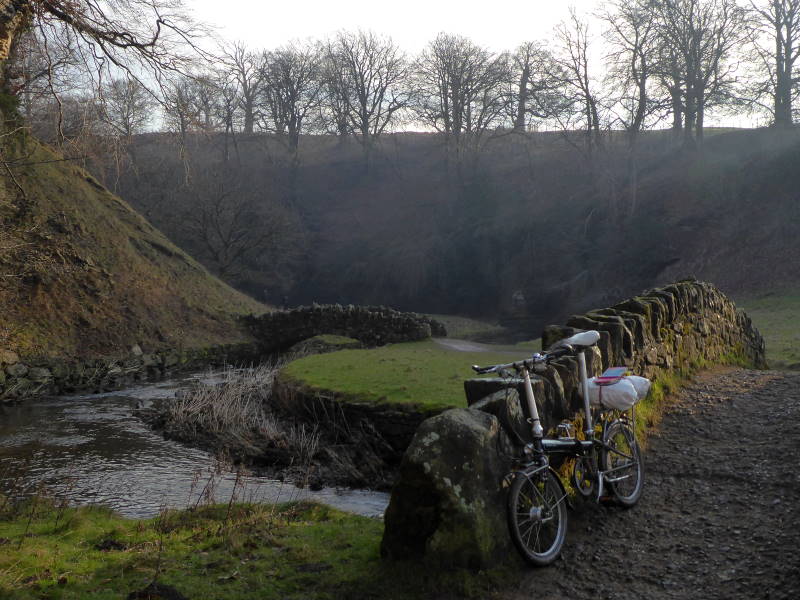 Another two-quid trundle – that is, a £2-flat-fare bus trip with a folding bike – took me to Ripon. It’s famous for its 800-year-old nightly horn signal, which I’ve experienced before with no clothes on. But my bargain trip today was to visit Yorkshire’s oldest continuously used building, and wander round the nearby Studley Royal Park (or, if you like, ‘Fountains Abbey without the admission fee’).

That oldest-continuously-used-building is the crypt of Ripon’s splendid Cathedral. Yes, the town is actually a city, and has been since 1836 – recently joined by 2022 arrivistes such as Doncaster, Dunfermline and Milton Keynes. (As a result of which Yorkshire now has eight cities: Leeds, Bradford, Sheffield, Wakefield, Hull, York, Ripon and Doncaster).

I’ve been to the Cathedral before, such as during the Ure edition of my Yorkshire Rivers rides. But today I had time to explore it properly, most notably its oldest and perhaps most intriguing part: the crypt, a tiny, austere chamber accessed down a narrow stone staircase.

People have been getting goosebumps here ever since it was built in 672 by St Wilfrid. This was centuries before the invention of things such as fireworks, ambulances, university degrees, or England.

Having meditated in the crypt, on matters such as life and death and whether my front brake block needs replacing, I enjoyed examining the decorated misericords upstairs in the Choir. (A misericord is a minimal ledge just about big enough to rest your bum on, but not quite big enough to sit on, for relief while waiting for the service to finish. Bus shelter seating is the same idea.)

The dozen or two misericords feature intricately carved people, animals and monsters, illustrating concepts such as good vs evil, vanity, and bad bagpipe playing. Helpful volunteers can tell you about them, and there are information boards to read. They tell you that one misericord figure – of a rabbit disappearing down a hole to escape a dragon – inspired Lewis Carroll while writing Alice in Wonderland. (He lived in Ripon as a child when his father was canon here.)

However – like pubs where Dickens wrote the Pickwick Papers, or bars drunk dry by Hemingway – there are many places that make similar claims, such as St Mary’s at Beverley.

I also enjoyed seeing the Hand, a slightly unsettling wooden figure sticking out the back of the organ. It’s a mechanical conductor, operated by the organist pressing a pedal, signalling to the choir exactly when to come in late.

But I was keen to get on my bike, and I rode a mile or two west to Studley Park. The Way of the Roses goes delightfully through here on a straight, car-light tarmac road, through a grand gate and past a finely situated hilltop church with obelisk.

Rather than head on towards Morecambe, I freewheeled down another estate road to the lake. There’s the entrance to Fountains Abbey here – beyond my budget today, so I went with my bike back east-ish along the lake to the Seven Bridges Valley, so named because there are five bridges over the picturesque ‘River’ Skell (more like a stream if you ask me).

This lovely hidden trail snakes along a ravine that feels bigger than it is, and involves some cute medieval stone bridges that date all the way back to the 1890s.

I eventually got back on to a bridleway – my Dahon has pretty chunky, robust and comfy tyres for a folder – and returned to Ripon through Studley village.

I was particularly pleased to find a view of the cathedral from the bridleway’s hilltop, the majestic facade standing over the landscape with a clarity you don’t get in the town itself. Because in Ripon’s centre, the Cathedral is usually invisible, obscured by buildings; the west front looks over not a large bustling square but a small cafe, couple of benches, and an osteopath. The square proper – with the obelisk that the evening horn blasts are made from – is a couple of hundred yards away, up a cobbled lane.

I had half an hour to wait for my bus back so wandered the square to find something to fill the time and my tummy with. But for me, no pint of local cask ale from Wetherspoons, or coffee from Costa, or pot of Yorkshire tea from the Wakeman’s Cafe. There are no toilets on the bus back, so I played safe, and made do with a pork pie and flapjack from Thomas the Baker.

I told you it was a bargain trip.