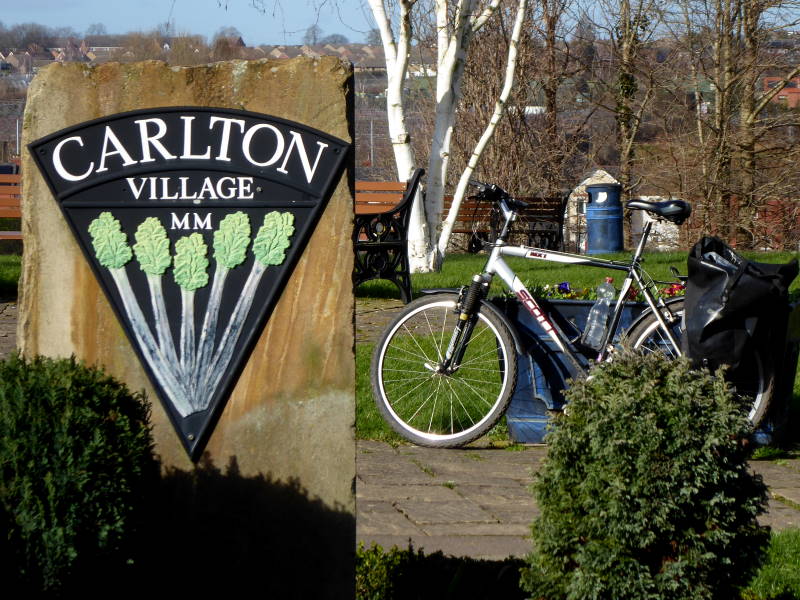 Yorkshire schoolkids know their triangles. Equilateral; isosceles; scalene; rhubarb. This last, of course, being a three-sided geographical shape with Wakefield at an apex. It’s the world’s rhubarb-growing equivalent of Champagne, or Roquefort, or Newcastle. So forget Bermuda: this is the world’s most famous triangle. The Rhubarb Triangle.

The exact corners can vary according to who you ask, but the currently accepted ones are Wakefield, Rothwell and Morley, all south of Leeds. Wet, damp and muddy, the area offers just the right conditions for growing the crimson superfood. Rhubarb originally came from Siberia, after all.

Today was not only sunny, but also the first day of the annual Rhubarb Festival in Wakefield, so I went along to explore it by bike. Only a selection of the dozens of chalets lined up at the foot of the cathedral offered rhubarb-themed items, but they were enticing enough: jams, pickles, gins, cakes, tarts…

…And a pork pie, complete with a rhubarb compote topping. Hmm; each tasted very good in its own way.

From one of the many shops and restaurants participating in the Food Trail, I also had a beef and rhubarb burger with chips, a rhubarb crumble and custard, and a glass of Rhubarb Triangle Wine (not actually rhubarb, just a rebadged French rosé). Hmm again: even the crumble didn’t taste all that rhubarby – though at a tenner for the lot, I wasn’t complaining.

The stalky offerings at the upscale cafe in the Hepworth Museum nearby looked promising (rhubarb and ginger soda, poached rhubarb and muscovado ice cream, rhubarb polenta muffins, rhubarb tart with stem ginger ice cream, Hepworth rhubarb chutney and apple sandwich etc). But they would have been out of my price range, as is the museum itself now, sadly: formerly free, it’s now £12 a pop.

I had more luck with the beers. I was very tempted by the enormous range of rhubarb-based ales in the friendly Bier Haus stall. As you might guess from the name, it had come all the way from Ossett. My local maker alone, Brew York, had two lines: Rhubarbra Streisand (stallholder Anne-Marie’s favourite) and the new Rhubarb and Custard.

However, I fancied a draught pint and a sit down, so I settled in the festival’s Rhu-Bar tent.

I had beaten the lunchtime rush, which meant it was too early for the first of the bands (Blubarb; they were to be followed by Rhubarb Jam).

That suited me fine – I wanted a quiet lunchtime drink, not cover versions of We Don’t Stalk Any More or If You Leaf Me Now.

I cycled round Thornes Park to enjoy the sunshine and feel the optimism of the perkily sprouting crocuses and snowdrops, but my main business was heading north, through regulation northern suburb, grey main roads and tyre fitters and Chinese takeaways.

Carlton, a handful of miles north of Wakefield, is Yorkshire’s most rhubarby village. It’s said the place debated changing its name to ‘Rhubarb’, which might have made it the most-spoken village name in cinema, thanks to the proverbial placeholder dialogue said to be uttered by crowd-scene extras. (Apparently, such dialogue these days is dubbed in afterwards by specialist voiceover companies.)

It boasts the Rhubarb Triangle Farm Shop, which of course I dropped in on. Mostly it’s a conventional farm shop, selling the sorts of things sold in farm shops, but there’s a decent range of rhubarb-based jams, gins, beers, pickles and preserves.

And the farm itself does indeed grow rhubarb, forced in the traditional Yorkshire style. In the 1890s it was discovered that if it sprouts in lightproof sheds in late winter, the stalks are sweeter and tastier. There used to be hundreds of producers in the Rhubarb Triangle, especially in WWII when forced rhubarb was one of the few ways of growing ‘fruit’ in winter (of course rhubarb is a veg, but for culinary purposes it’s treated like a fruit).

Now there’s only a handful, but Yorkshire Forced Rhubarb is a protected regional speciality, like said Champagne or Roquefort or Newcastle Brown, and those forcing sheds are still plain to see in the gently rolling landscapes round Carlton’s farm shop. The 1960s cycling legend Beryl Burton was a full-time rhubarb-farm labourer, working in nearby Morley. For her, only about ten minutes’ ride from here.

Oldroyd’s, another rhubarb producer with a high media profile, is also in Carlton, on the opposite side of the village to the RT farm shop.

So no wonder the village sign celebrates its produce by depicting rhubarb stalks on a triangular background. But beware: while the stalks are delicious, the leaves are poisonous and nobody’s quite sure why. (Oxalic acid partly, but the other parts are a mystery.)

I rode from Carlton to the nearest train station at Outwood on back lanes that wind through several fields of outdoor rhubarb – most of it harvested, but a few crimson stalks remaining, contrasted against the rich black earth.

I didn’t have any raw rhubarb in my panniers, but I did have some rhubarb-flavoured beers. Well, I was forced, wasn’t I?