The seventh of my Rivers Rides was a spectacular two-day, 90-mile trip from remote moortop to vale farmland along the River Swale. Day 1 featured potentially illegal trousers, fjords, castles, upside-down pub signs and a lot of quite wonderful scenery.

Train problems meant it was lunchtime before I got to Kirkby Stephen station. Things got off to a rip-roaring start, but not in a good way: my ancient cargo pants, Vietnam veterans indeed, tore spectacularly as I cocked my leg to get on to my bike (pic).

They didn’t get any less torn as the day progressed, either. I spent the rest of the day increasingly well ventilated.

Luckily I managed to avoid arrest. 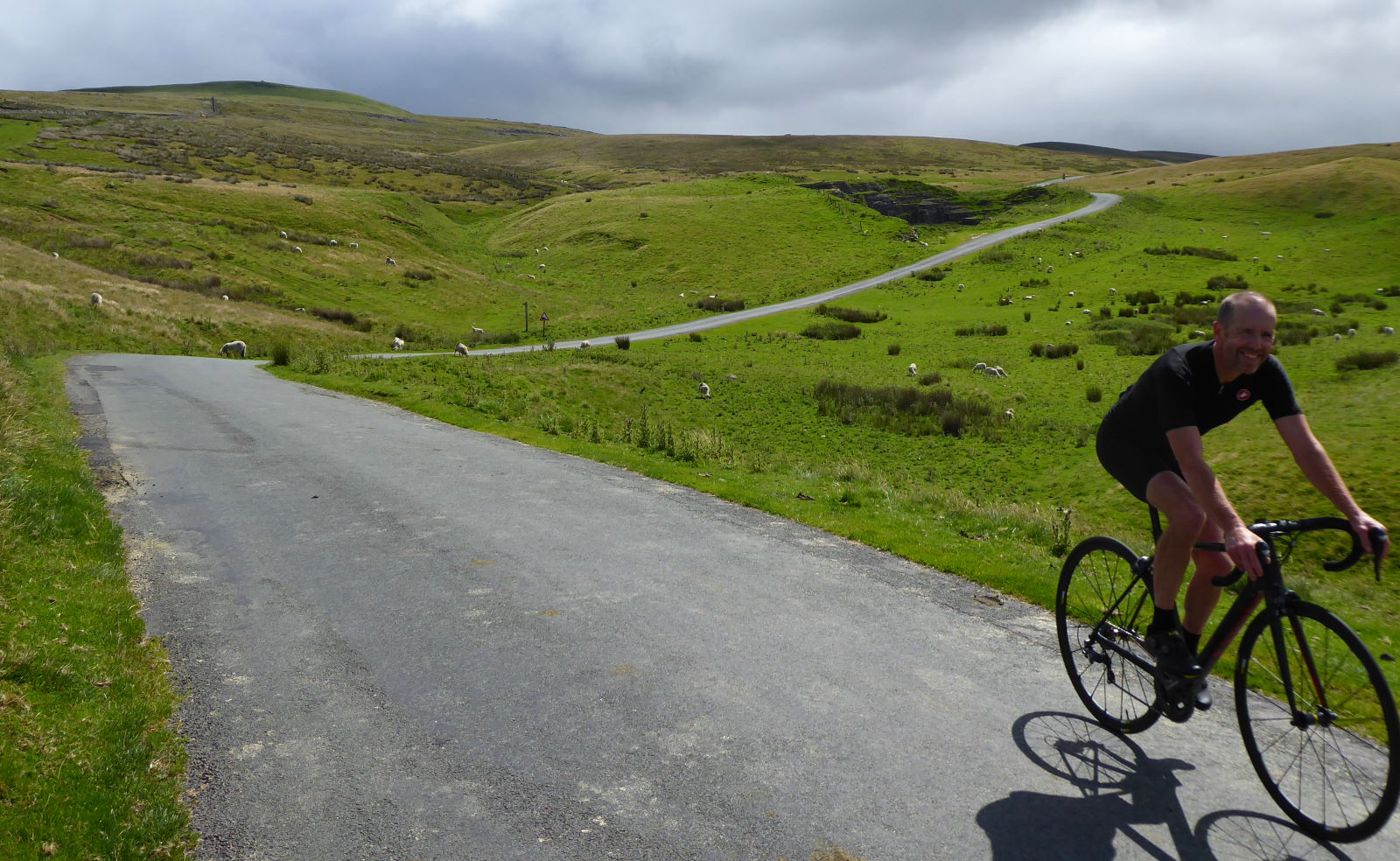 I rode through Nateby and up Lamps Moss, with views back to the Vale of Eden (pic). I wasn’t the only smiling cyclist out today. 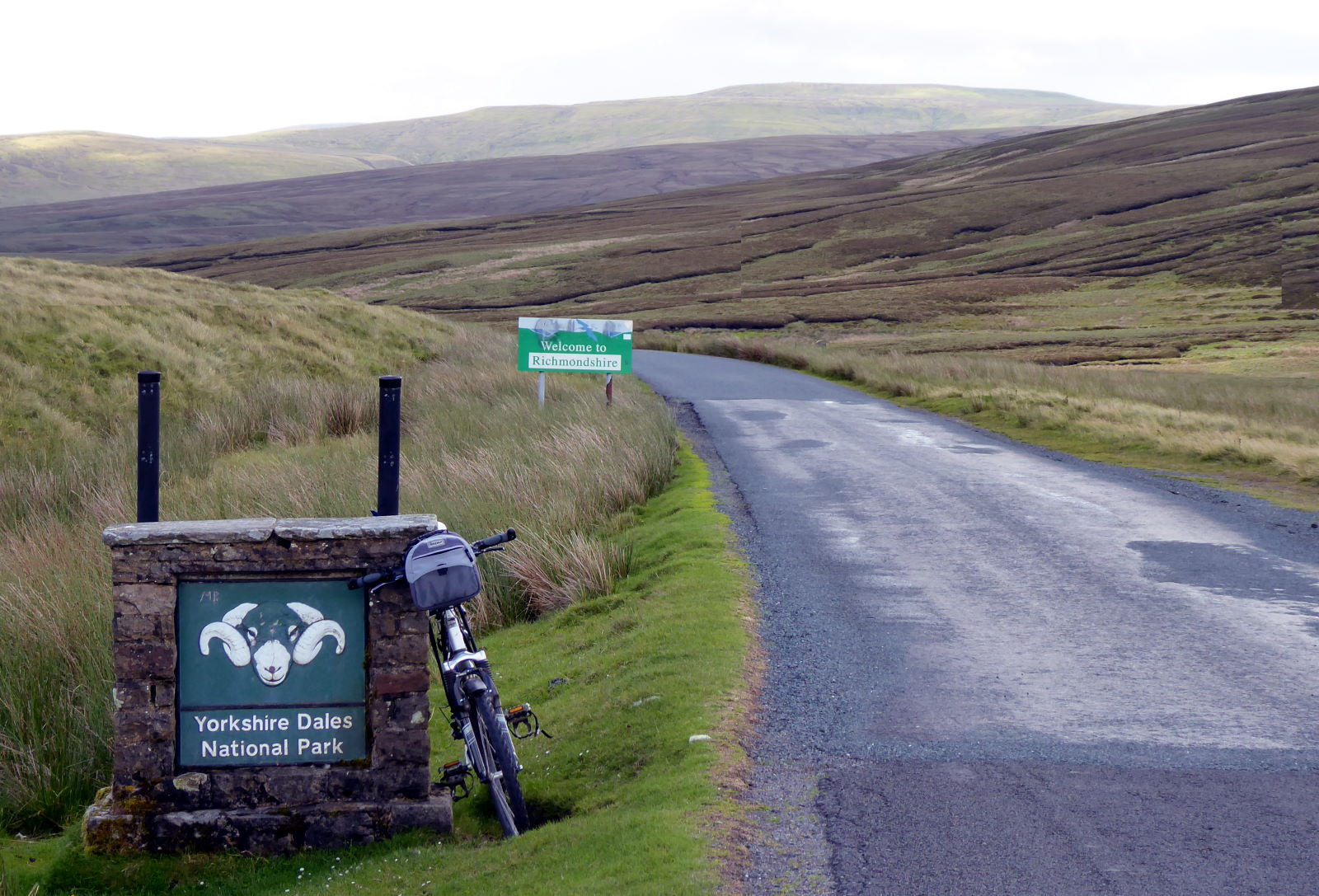 At the watershed, with Nine Standards Rigg to my left and some wet but defiantly happy Coast-to-Coast walkers for company, I crossed from Cumbria into Yorkshire (pic). From here it was downhill all the way to my house.

In theory. But then in theory, it’s easy to switch bank accounts. Except HSBC’s phone banking told me to do it online, their website told me to go to a branch, and the branch told me to use phone banking.

A few determined streams begin their journey east (pic). I had a brisk tailwind behind me and altitude in the bank, though whether HSBC had switched it yet I wasn’t sure. Anyway, I was zooming along, and happy like you simply can’t imagine.

Unless you’re a cycle tourer, in which case you simply can.

This is the source of the Swale, though not where it begins (pic). The light drizzle that had dusted me on the way up gathers here, in Birkdale and neighbouring Sled Dale, and runs off the hillsides heading for the North Sea. In a couple of days’ time, the water here will be gracefully passing York Minster. And soon after, less gracefully, Hull.

This is where the Swale begins, though not its source (pic). Round about where that farmhouse is, Great Sled Dale Beck and Birkdale Beck join, and from here it’s the River Swale. The name comes from an Old English word meaning ’fast-moving and quick to rise’.

In which case, I’m not very swale. 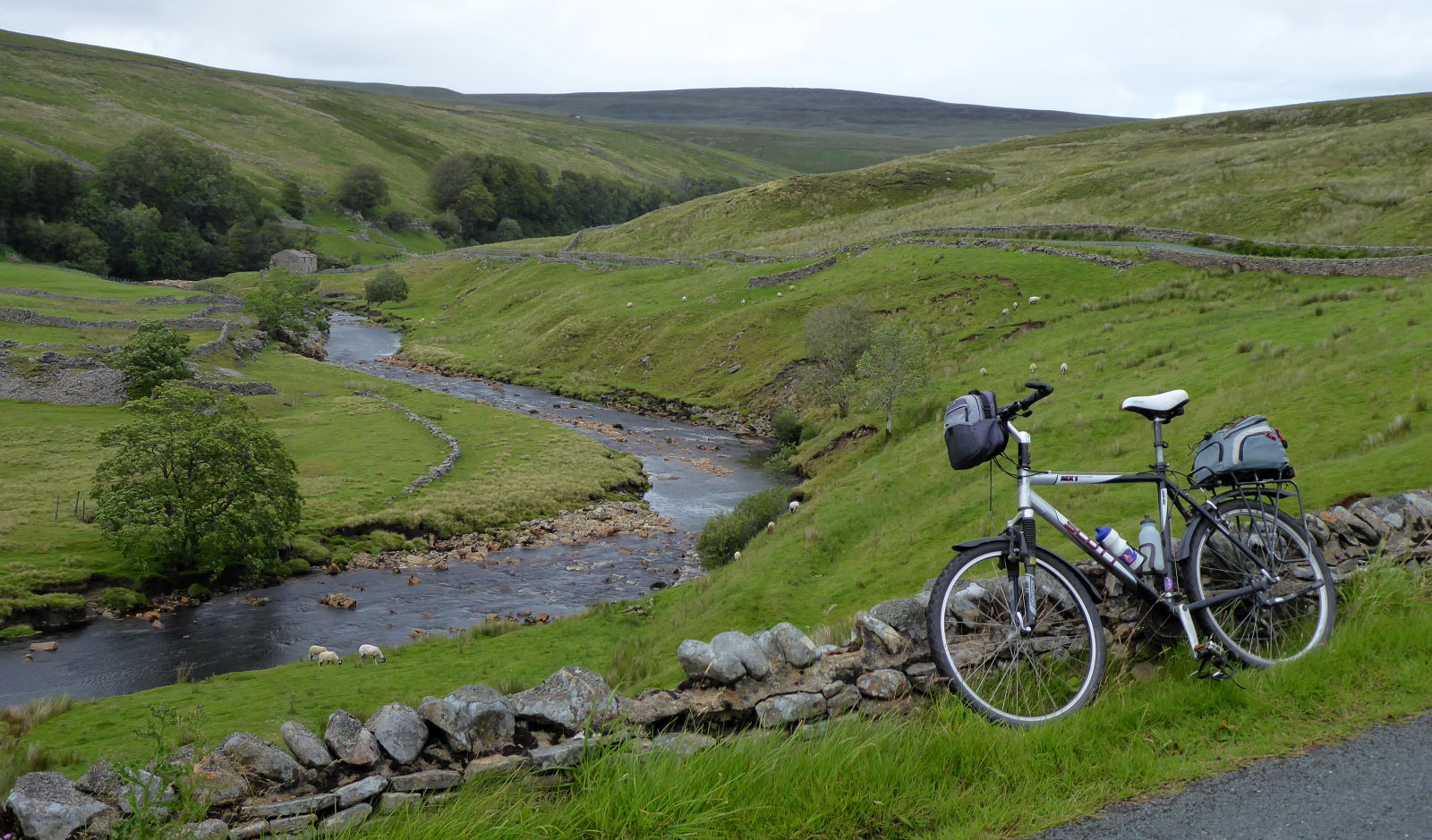 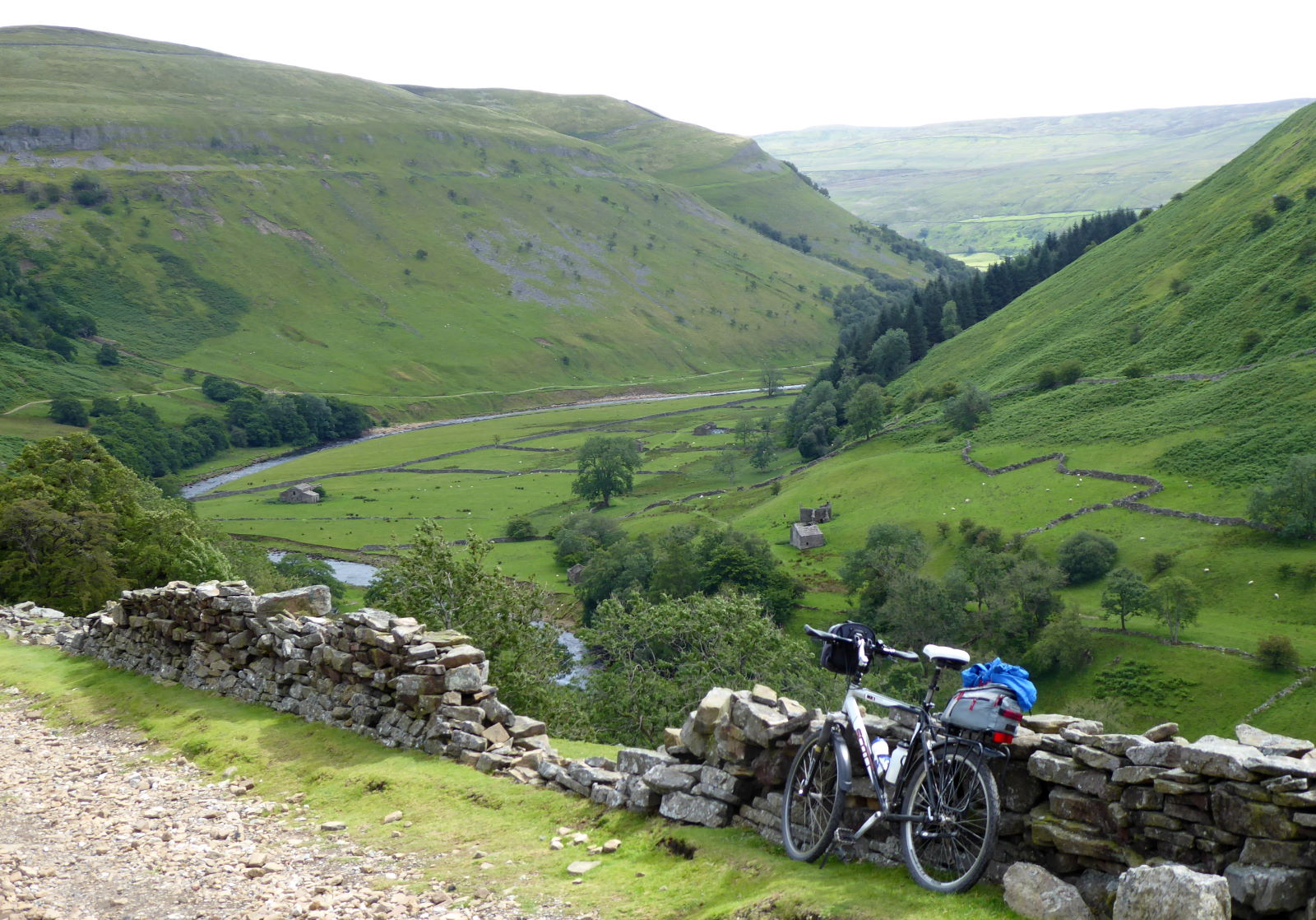 From Keld, the highest village in the dale, begins the Swale Trail. The 20-mile mountain bike route starts off with some quite fabulous scenery, as you climb up out of the village for views of one of Yorkshire’s finest gorges (pic). I lunched at a waterfall, happy like you might be able to imagine even if you’re not a cycle tourer. 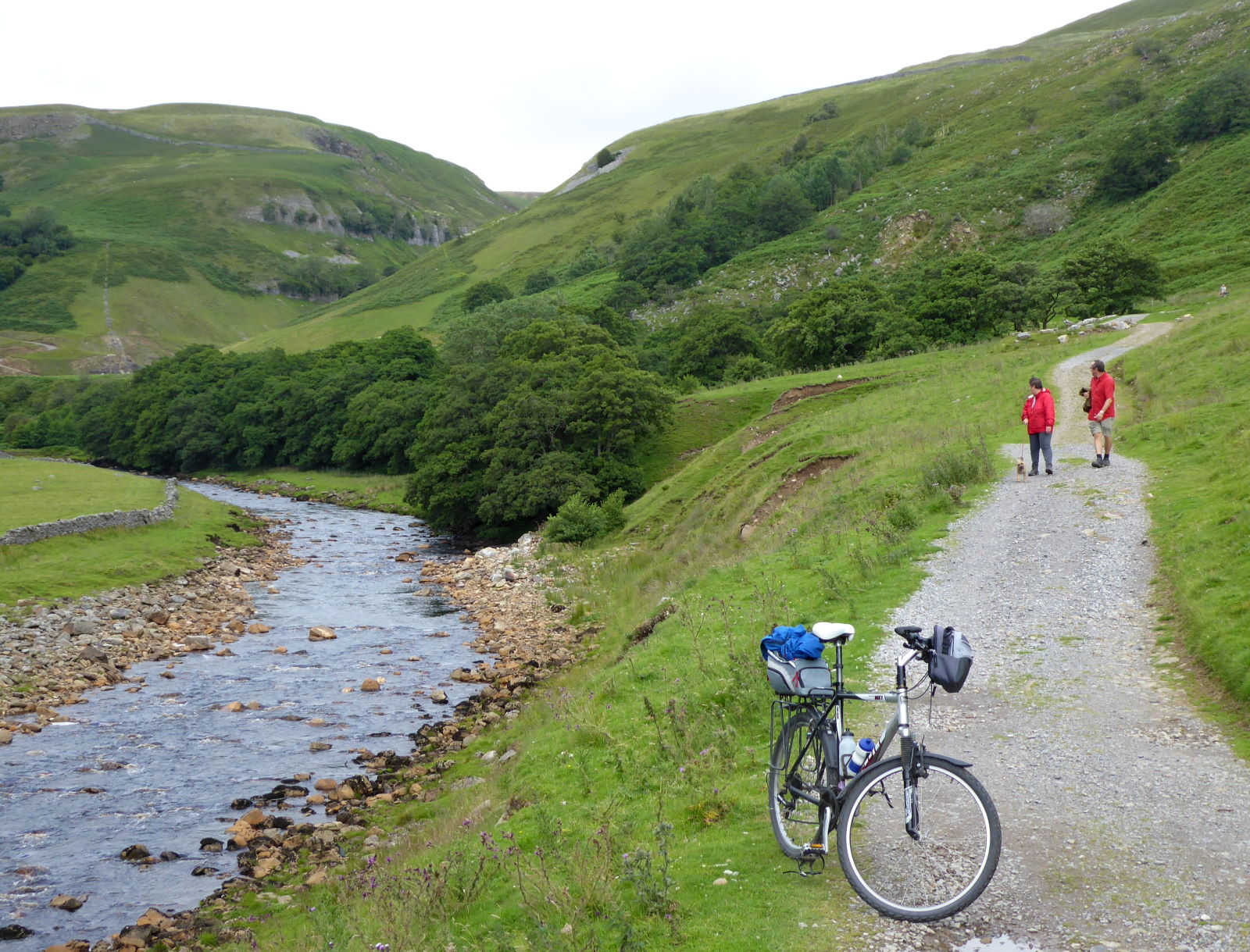 A picture is worth a thousand words, they say (pic). That’s 985 words saved, then. 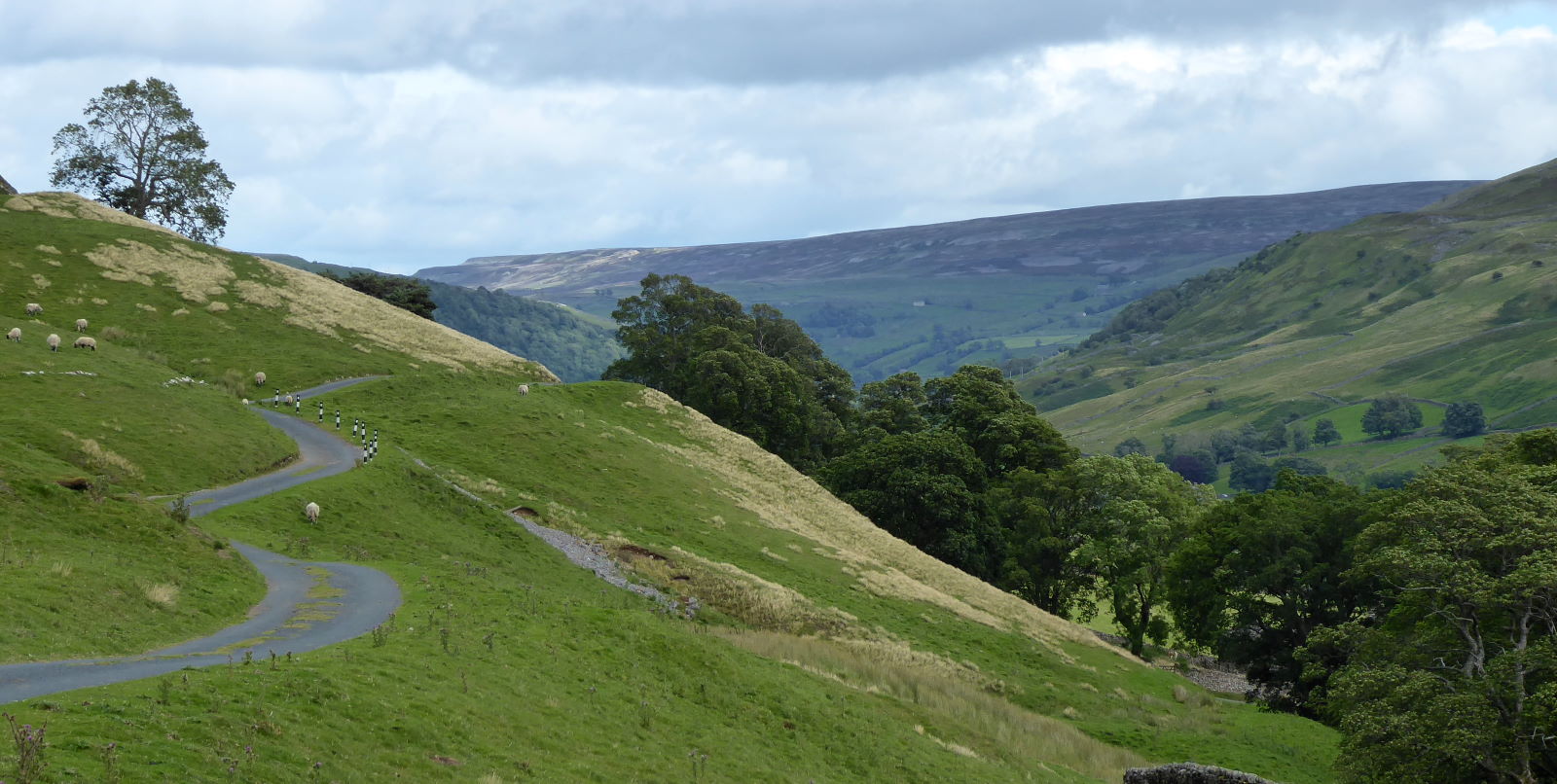 I headed east, between Muker and Gunnerside, along the back lane above the dale (pic). There were lots of families out cycling, which was great to see. And, encouragingly, no childish moaning about tough climbs, stony surfaces, I’m tired, are we nearly there yet, etc. I’m pleased that I’ve managed to stop that. 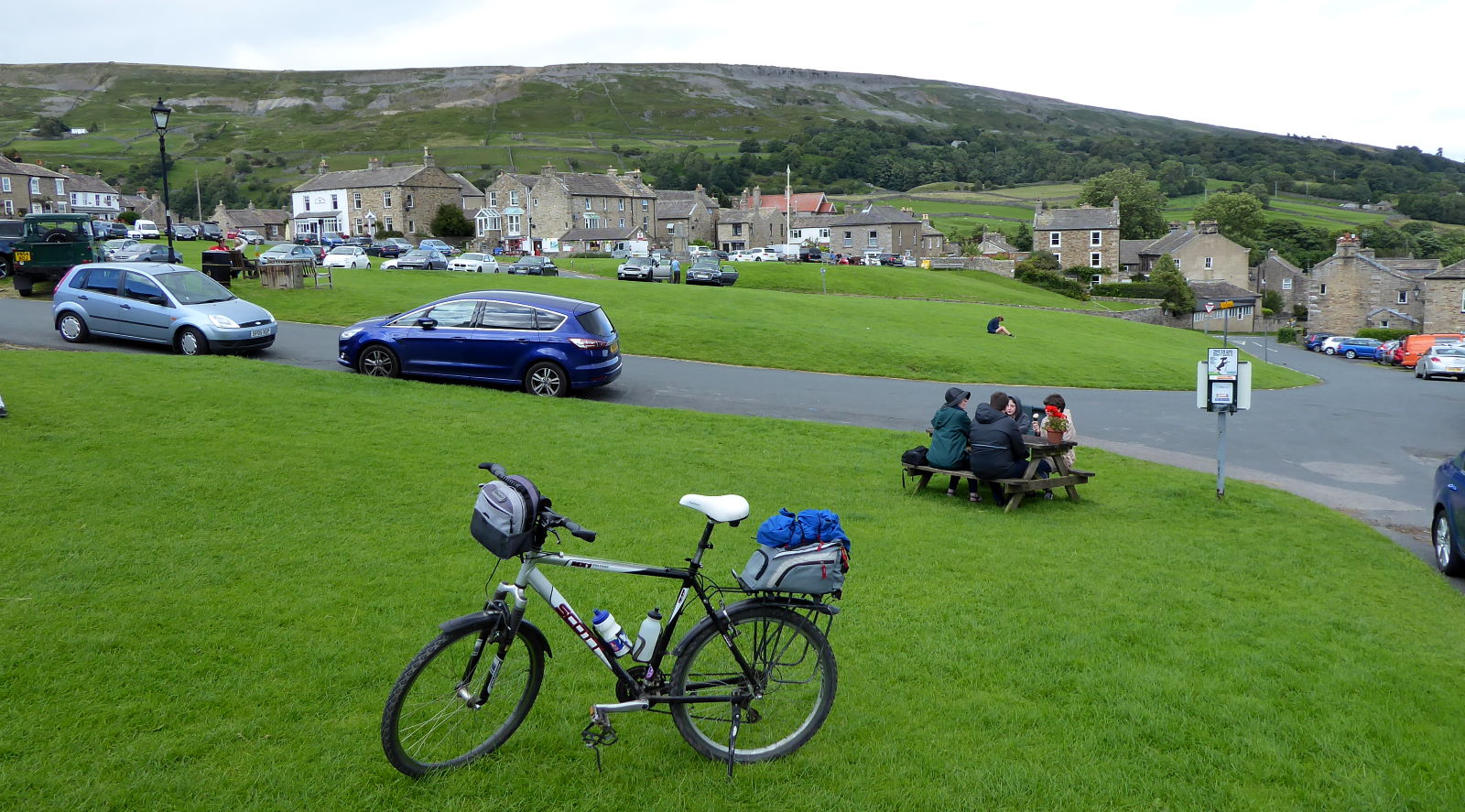 In Reeth, I stopped to admire the green and have a snack among the demob-happy tourists…

…and smiled again at the upside-down pub sign (pic).

However, I’d somehow never ridden along the lane right alongside the Swale, dramatically situated underneath the ruins of the castle (pic).

Or, as an estate agent might call it, ‘fine building of period charm with bags of potential’.

The sign (pic) reminded me of the Swale’s reputation as Britain’s fastest-to-spate river. It can rise metres in minutes. These days, evidently, it does so even more abruptly than a generation or two ago, when it only rose feet in minutes.

You can imagine what’s to blame. The EU, clearly. 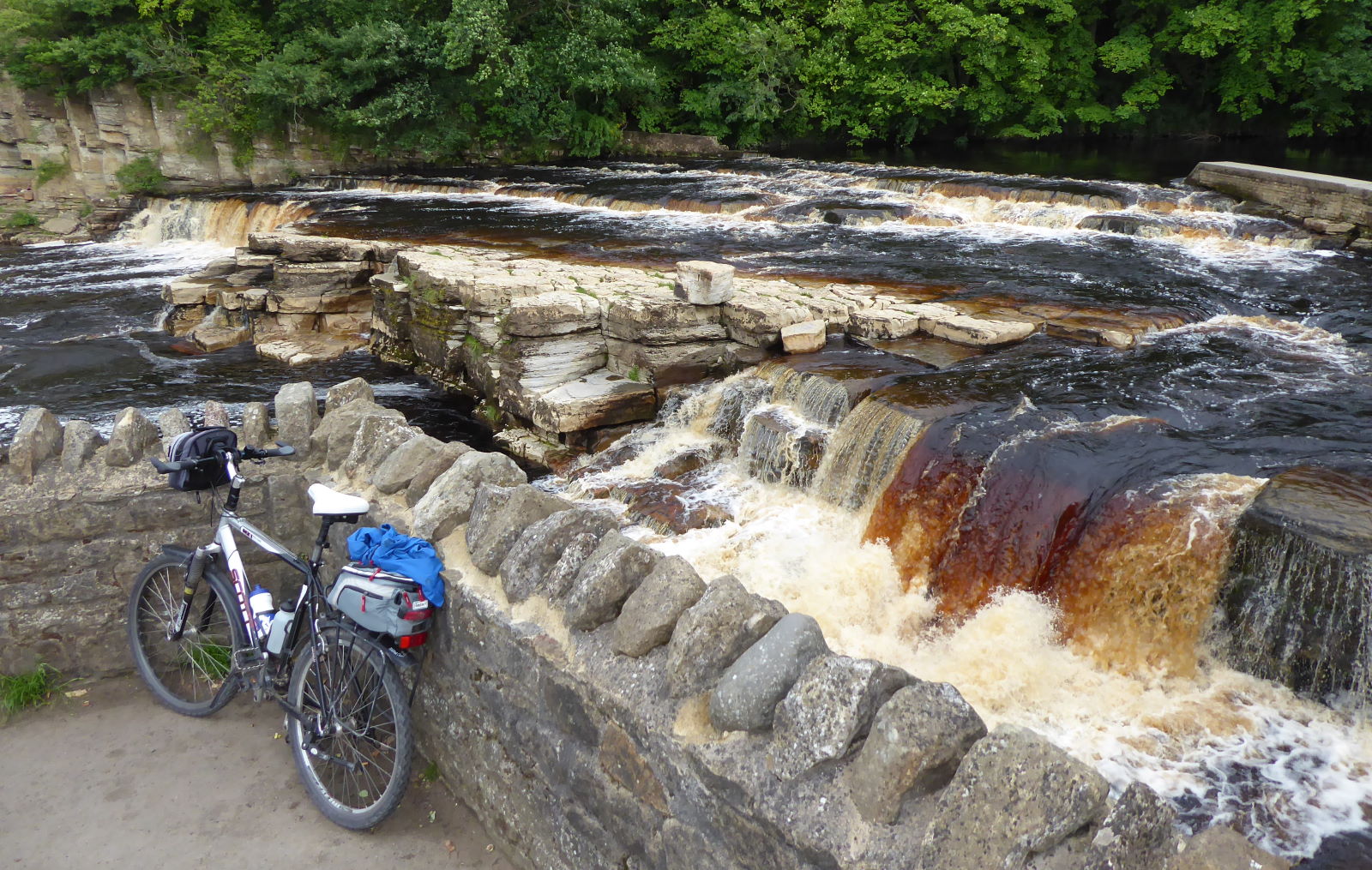 The scenery quietens down after Richmond, and the Swale placidly wanders along Vale of York farmland. It was nearly seven, thanks to my delayed start this morning, and I scuttled along quiet back lanes through little villages with occasional views of the waters (pic).

With accommodation snapped up by staycationers and campsites rendered pointless by their not providing toilets or showers, I got the train home from Northallerton, intending to return the next morning to continue.

Unfortunately I was booked on a late train and the station waiting room was shut, so I had to kick my heels in the pub next door with nothing to entertain me except the TV highlights of England’s test victory today.