Day 2 of the River Swale ride featured a lot of quiet back lanes, waterside bridleways, and a bridge to nowhere by the final confluence with the Ouse.

I was at home last night, and got the morning train back to Northallerton to resume. It was market day, and the centre was mildly lively with stalls selling everyday consumables such as fruit and veg, cakes, facemasks etc. 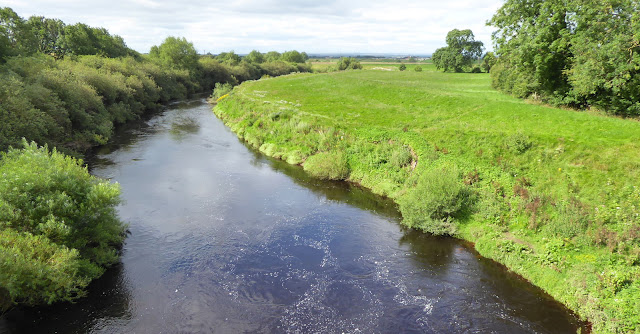 Back on the road, I headed west to realign myself with the Swale (pic), now meandering quietly through flat farmland. And yes, I had changed over to a legal pair of trousers for today. 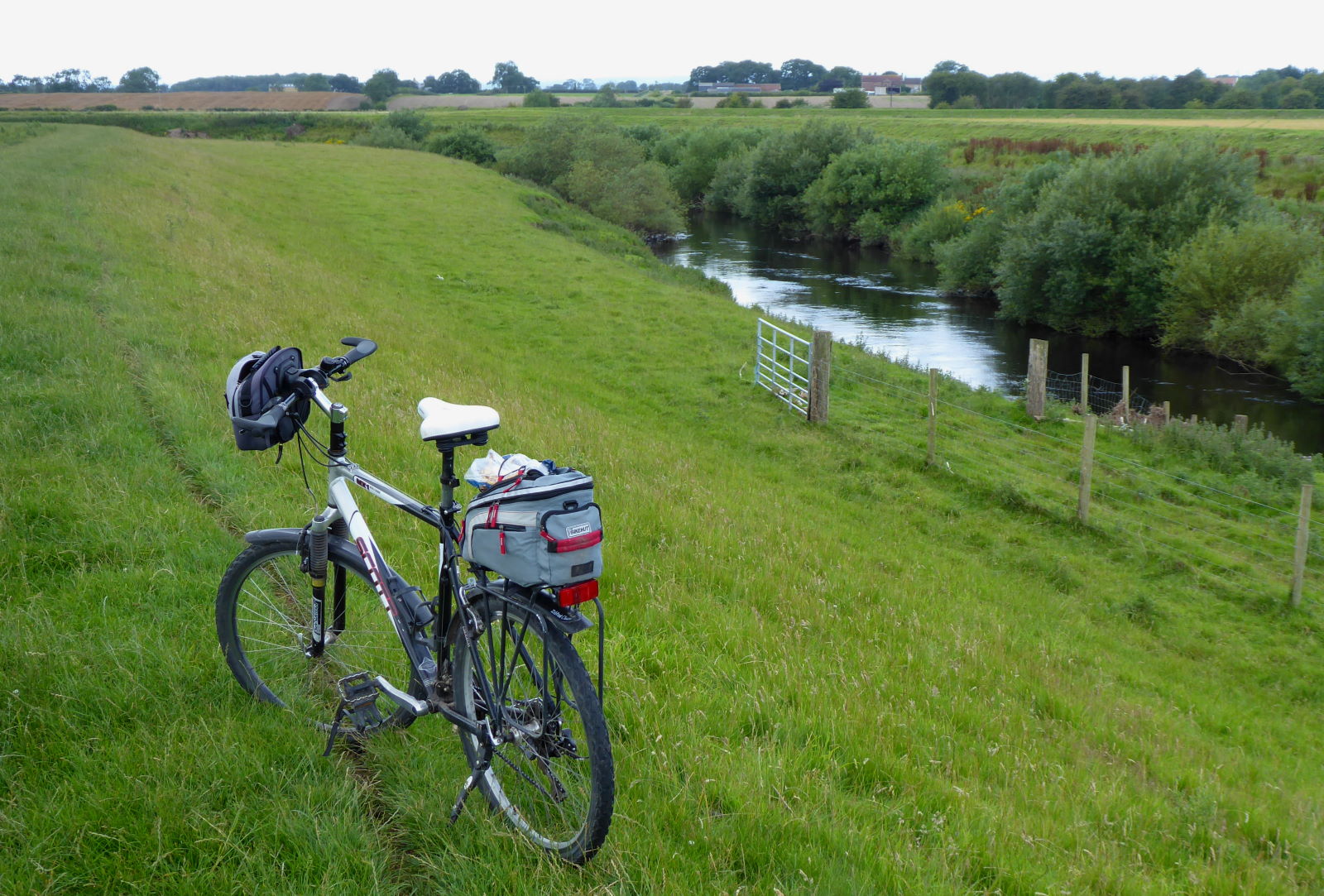 I’d chosen the right bike for the trip (pic) – my trekker, an old hardtail MTB fitted with rack, mudguards and raised handlebars. Out of all eight rivers in this project, the Swale is the one you can cycle most closely, with bridleways along most of its non-roadside length, for which my trekker was ideal. 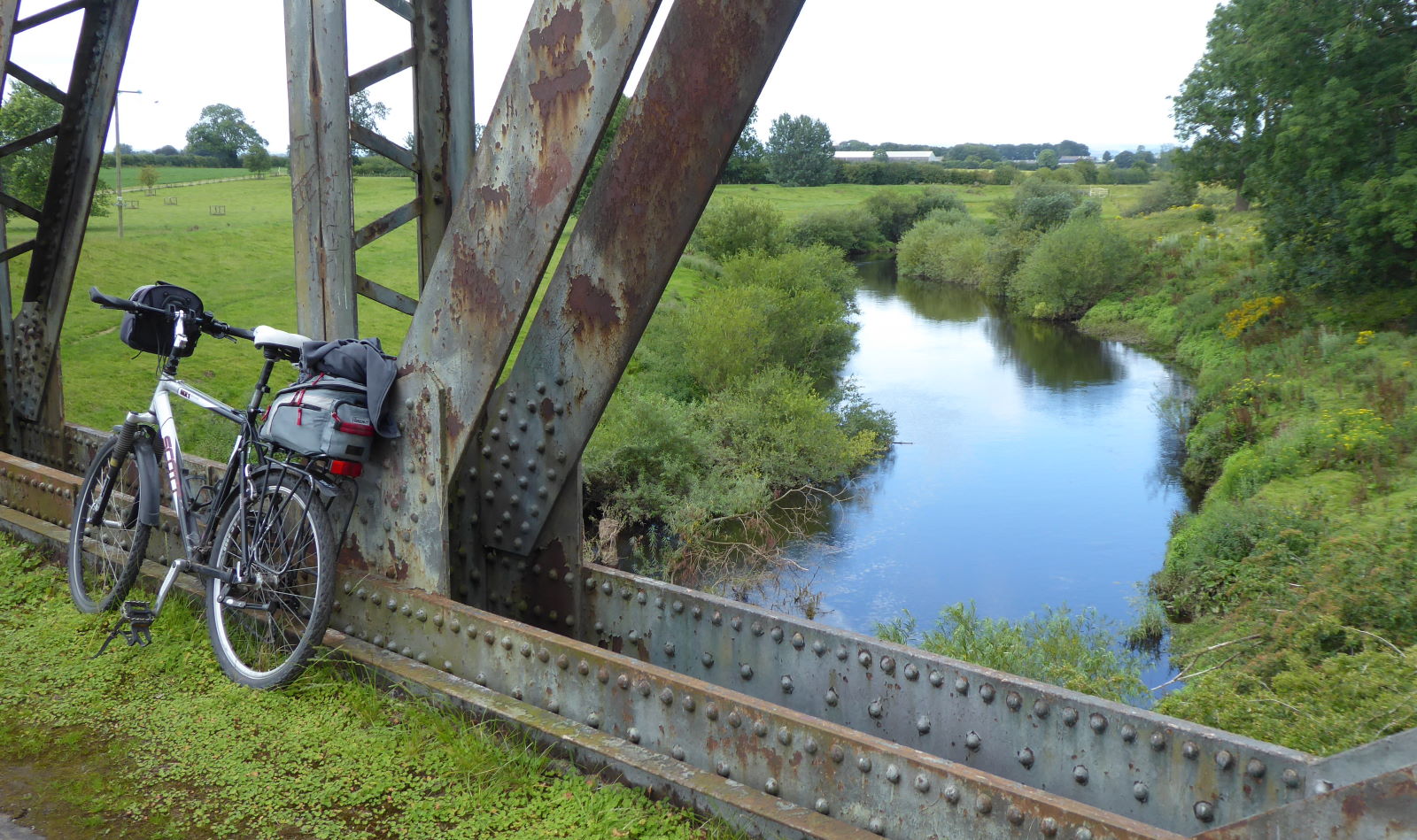 At Maunby I crossed over the Swale on the old railway bridge (pic), on a path of debatable legality but clear everyday common use. Locals seemed quite happy to direct me along it. Perhaps they had heard of my trouser debacle yesterday, and were just happy to be rid of me. 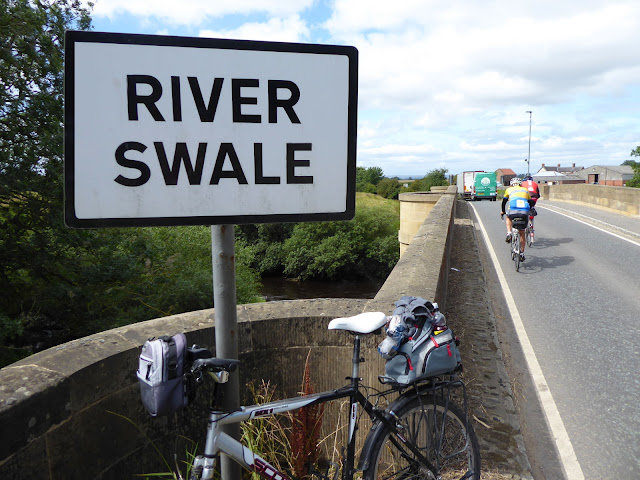 A feature of the river is how many village names reference it: Brompton on Swale, Bolton on Swale, Myton on Swale etc. Satnav fails are bad enough, but if you turned up at the wrong Bolton, for example, in mailcoach days, you were days rather than hours from where you should have been. 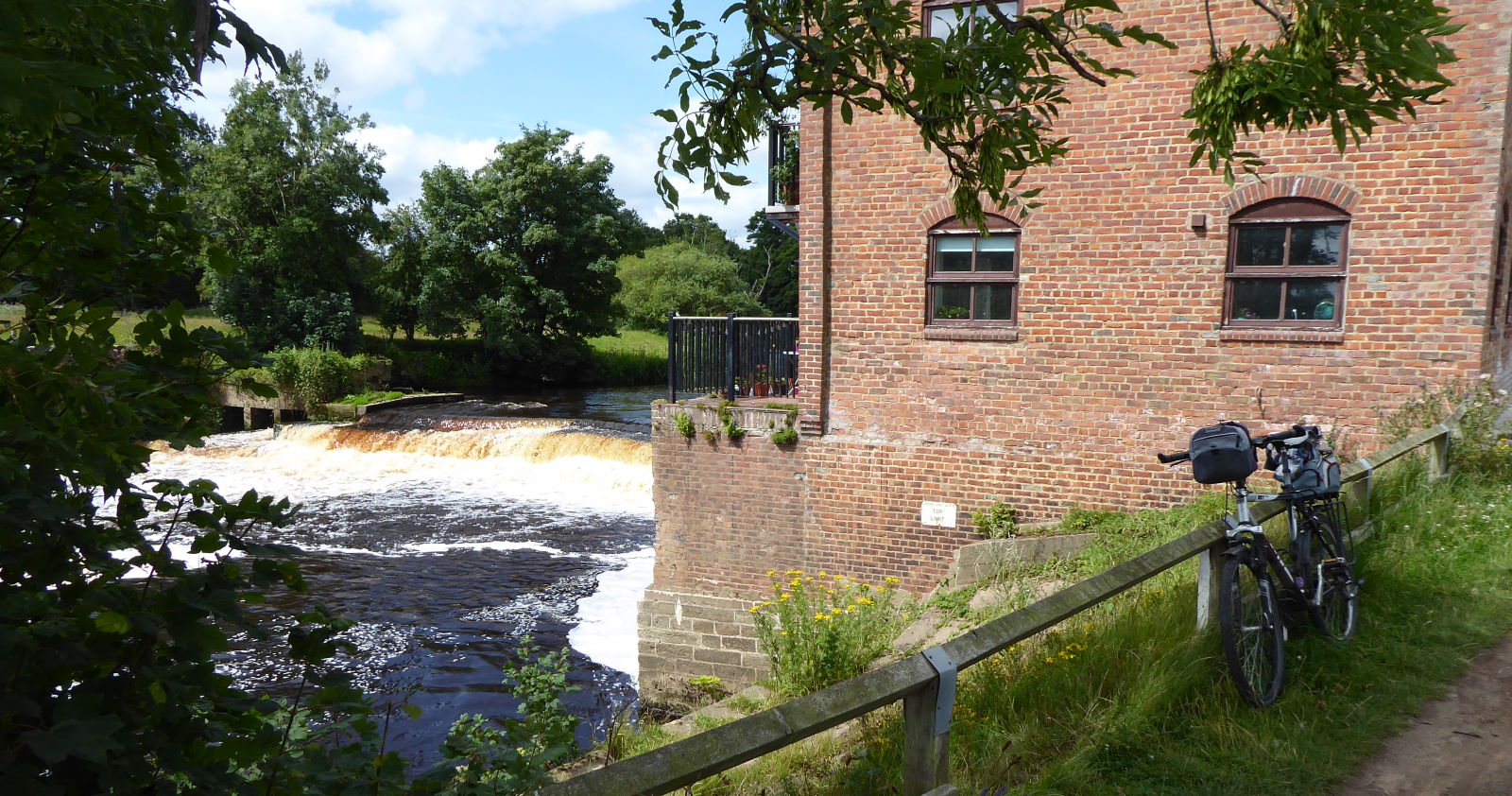 Being the tightest bloke in such a financially cautious county is clearly something. John M– (they had some strange names in those days) was so worried about people nicking his flour when he was away that on departure he would press his face into it, thus leaving an impression that would reveal any tampering when he returned.

Well, here’s the village mill, whose flour may have adorned his face. 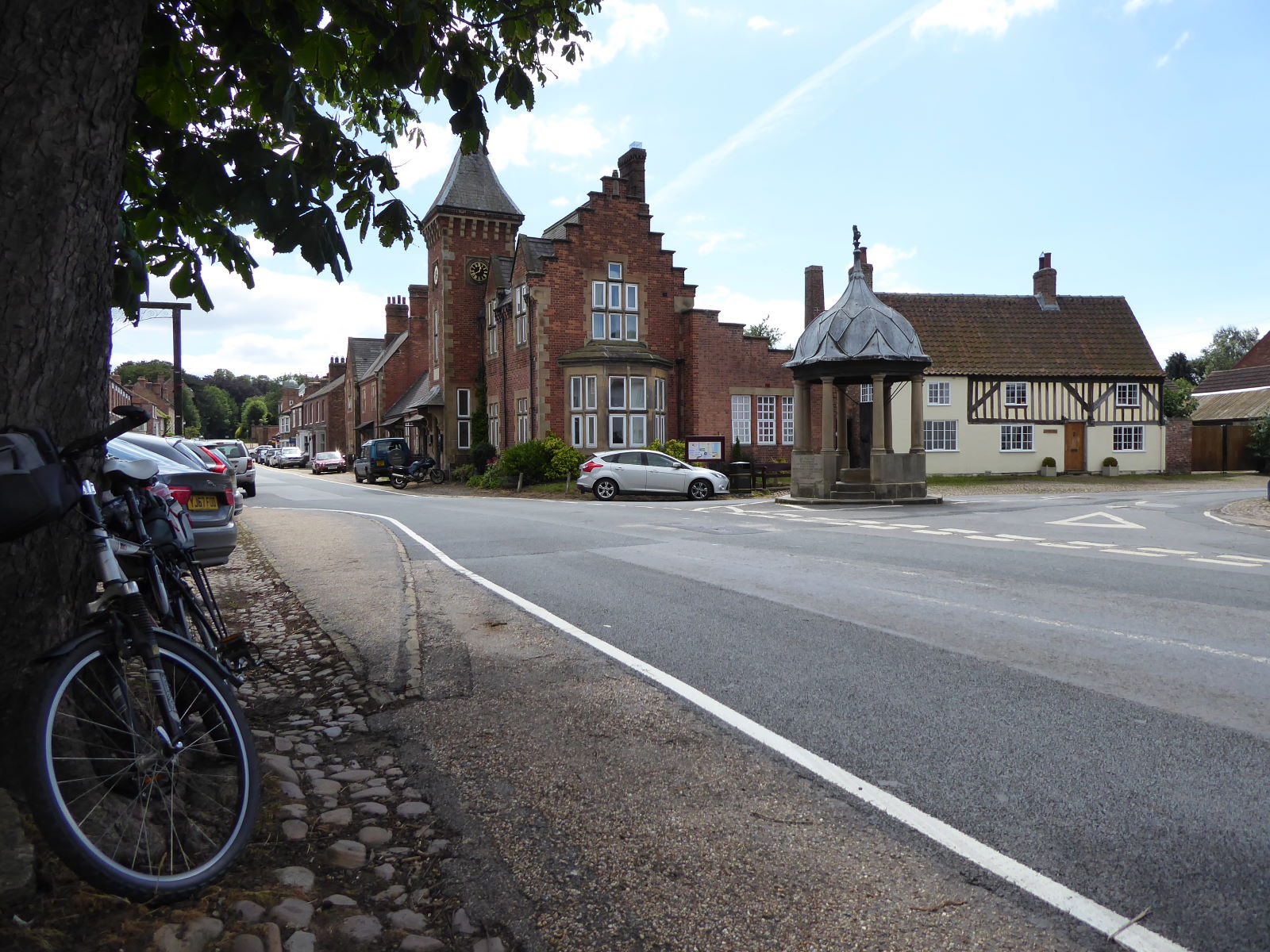 The village of Brafferton had some fine brick houses (pic) and a distinctive brick church. A fine place to stop for a snack. It’s amazing how many places are. 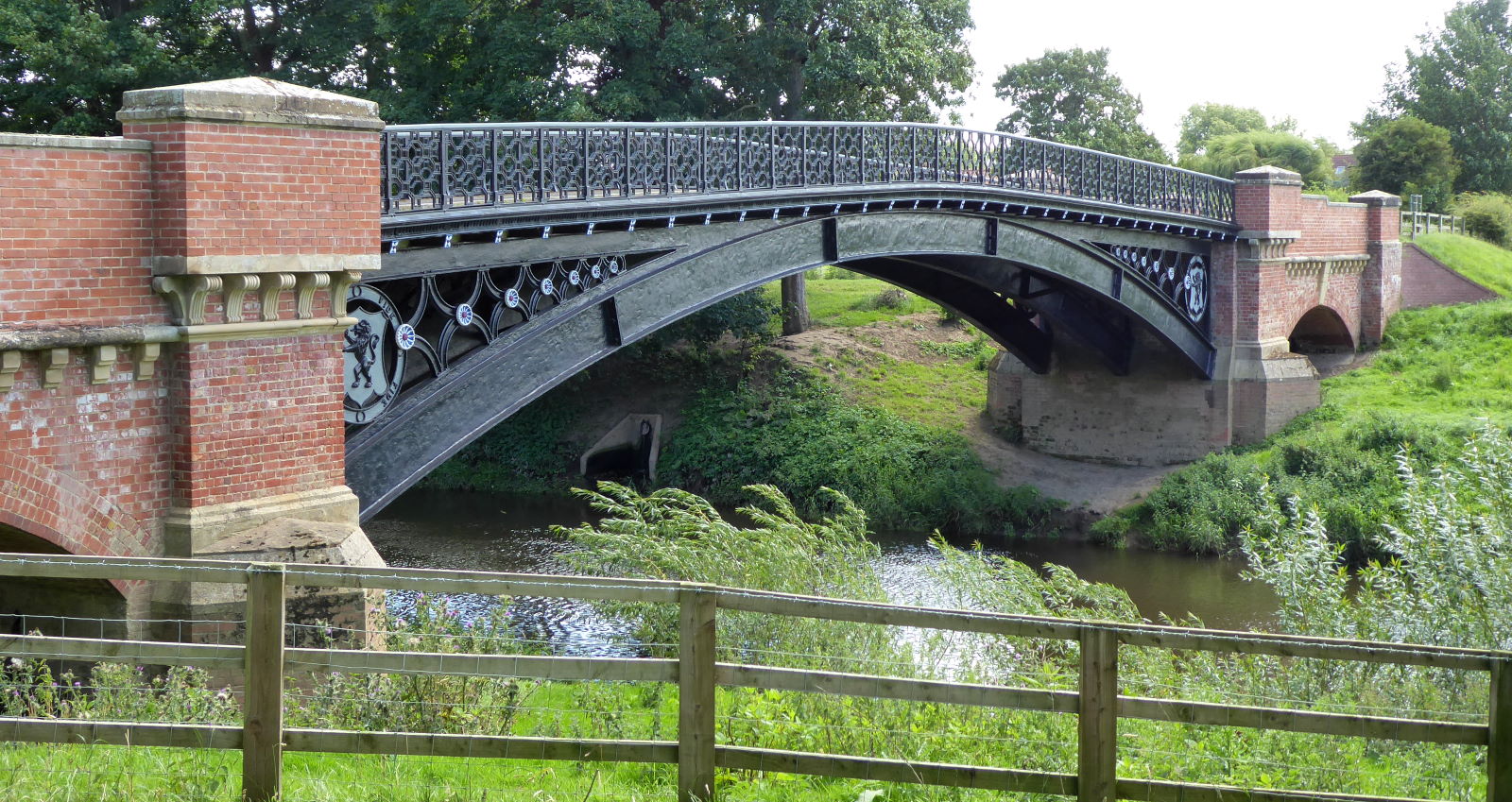 The Swale finishes at Myton (…on Swale) just downstream from this historic bridge (pic). There were two puzzles here. First, someone had left a pair of decent-looking walking boots on the bridge, along with an empty can of beer.

Someone who’d just completed the Swale Trail walk, perhaps, who had simply had enough of walking and didn’t want to see those damn boots again?

Second mystery is the other side of the bridge, which turns into a narrow and rapidly indistinct bridleway. Myton is a cul-de-sac, and the crossing nowadays is a bridge to nowhere. This was the site of a major battle with the Scots in 1319. Fortunately nowadays the English and the Scots have no disagreements about anything. Like EU membership for instance. 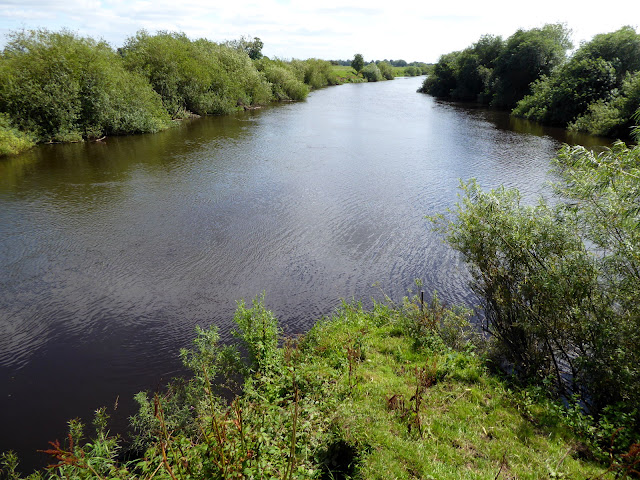 And this was journey’s end. A short walk along from the bridge is the confluence with the Ure (pic).

The two rivers (Swale on the left of the pic, Ure on the right) feel pretty equal in status, though maybe that’s my 21st-century collaborative sensibilities at work, rather than old imperialist attitudes about one river being dominant over the other.

It’s been a gloriously varied and scenic ride. Upper Swaledale is Yorkshire’s, and possibly England’s, most dramatic river landscape, and the lower dale was a pleasure to trundle along thanks to the bridleways and back lanes.