The eighth and last of my Rivers Rides was a splendid three-day, 130-mile trip from lofty moors to vast estuary along the River Ure. Day 1 featured Yorkshire’s Niagara, someone who couldn’t organise a drink in a brewery, a disappearing hornblower, and lots of grand dales scenery. 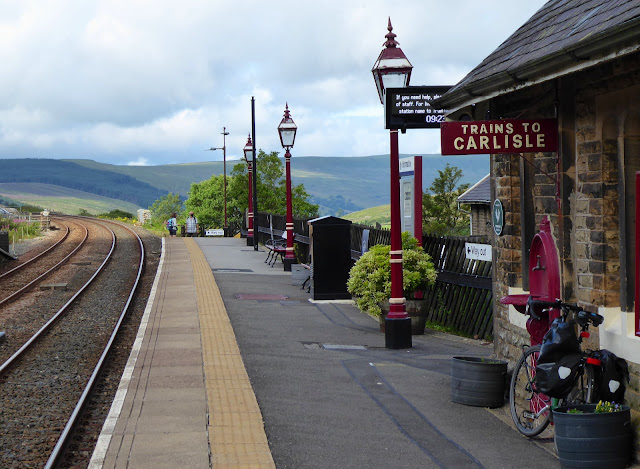 The culmination of my rivers rides started with a train up to Garsdale (pic), on the Settle to Carlisle line, round about the highest point on England’s main lines.

It’s always cloudy and drizzly when I come up here. I’ve cycled under Ribblehead Viaduct five times and still don’t know what it looks like.

I must come on a clear day. If I can find out when it falls next year. 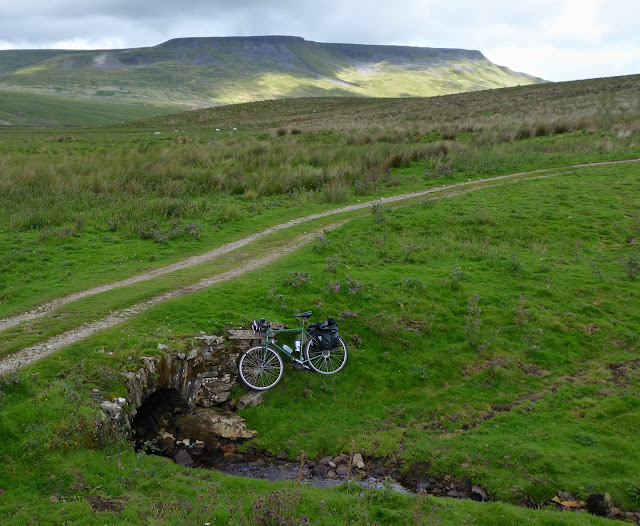 I cycled up the B road past the Moorcock Inn to where Yorkshire’s longest river gathers, on the side of Lunds Fell. The furthest upstream you can get on a bike is on the Pennine Way, and I had the baby watercourse to myself at a little packhorse bridge (pic). From here it’s nearly 130 miles downhill to the Humber, absorbing the waters of just about every other significant river in the county en route.

The Ure is a river with ambitions. It gets mature very quickly: after just a mile or two it’s already in a broad, expansive dale (pic), as if keen to do business. 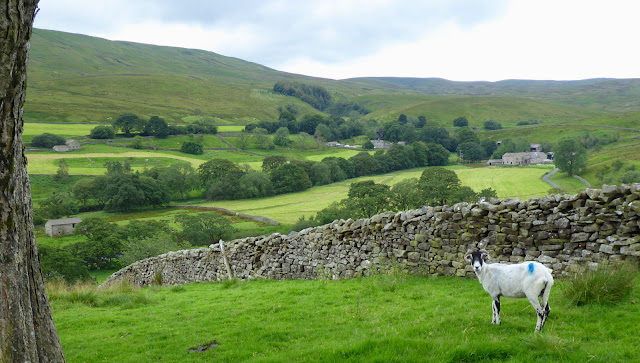 If it was an MP, it’d be a Tory Boy, only 15 but already promising to ease that planning application through for you, nothing to do with your recent donation to the party of course. I muttered about politicians but still managed to enjoy the scenery (pic). 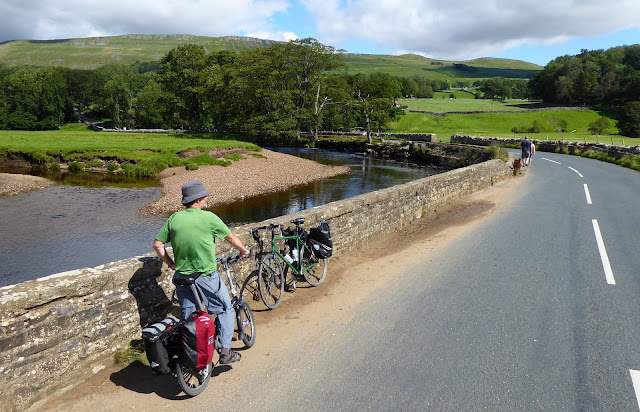 Wensleydale’s first town is Hawes, a likeable market town lively with walkers, locals and day-trippers plying the cafes and pubs.

I met up with my friend Tim, who had been riding round Yorkshire and who was to join me from here to York. We planned to emulate the Ure by absorbing some liquid of our own en route in due course.

Over at Tim’s blog Unravel Travel, you can find his version of what happened; see pictures of the back of my head; and read things I don’t normally cover in my blog here, namely, facts and useful information.

After breakfast – well, cake, actually – we struck out alongside the river in the sun (pic). 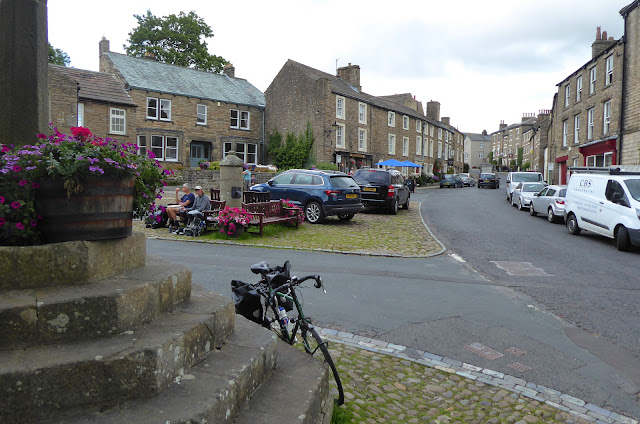 Askrigg (pic) was the location for BBC TV’s All Creatures Great and Small, a cosy Sunday-evening feelgood drama about a 1930s Yorkshire vet.

I was taken aback to think that the first series is as far in the past from us now as the period was from the first series. And that the BBC series is now so old, Channel 5 are remaking it all, starting from September 2020.
When the first series came out, I had a green Raleigh Clubman bike with a Brooks saddle. Wish I still had it. The saddle might be worn in by now. 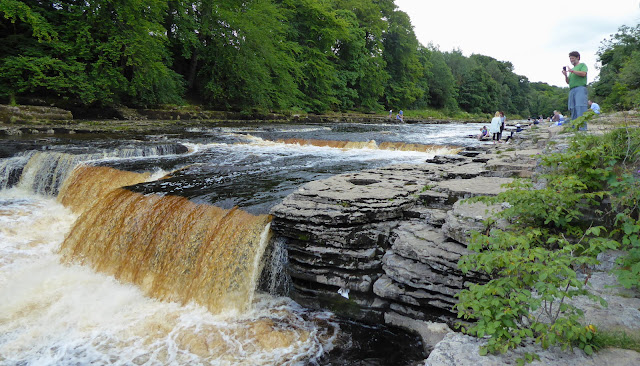 A few miles on was Yorkshire’s answer to Niagara, though I probably didn’t hear the question. Aysgarth Falls (pic) is genuinely spectacular. Not a word you often hear people say in connection with British scenery, probably because they couldn’t hear it either, over the sound of the water.

This afternoon it was a gentle hubbub of picnickers, paddling families and middle-aged cycle tourists with cheese sandwiches, all sat on the conveniently flat rocks at the side (pic) and enjoying the warm sun.

Tim reckoned he could tell a pair of young women were Romanian by the way they took their selfies. 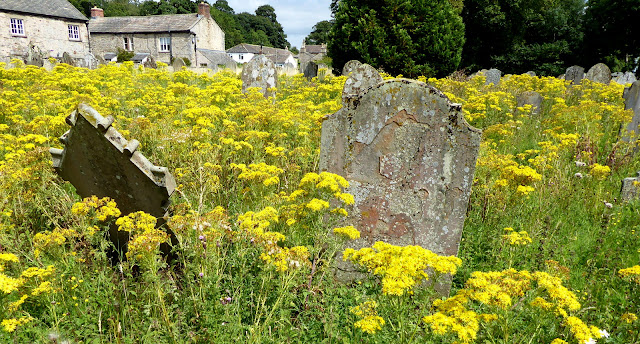 Wensley, the village which self-importantly gives its name to the whole dale, was picturesque as far as it went, which was about a hundred yards. We poked round the 13th-century church, which had an attractively rewilded graveyard (pic). That’s the sort of thing I’d like to have when I’m dead. But not yet, obviously. 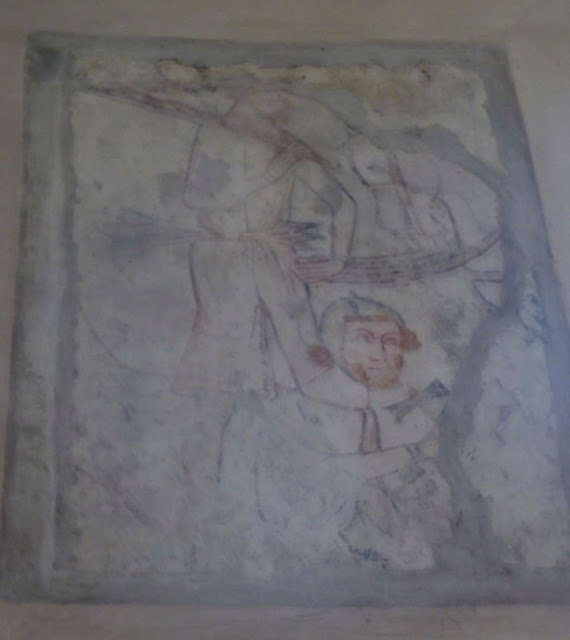 The church walls had the faded remains of frescos (pic). I was quite moved to think that they were nearly 800 years old.

I looked hard but couldn’t see any pictures of a vet with his arm up a sheep’s backside. 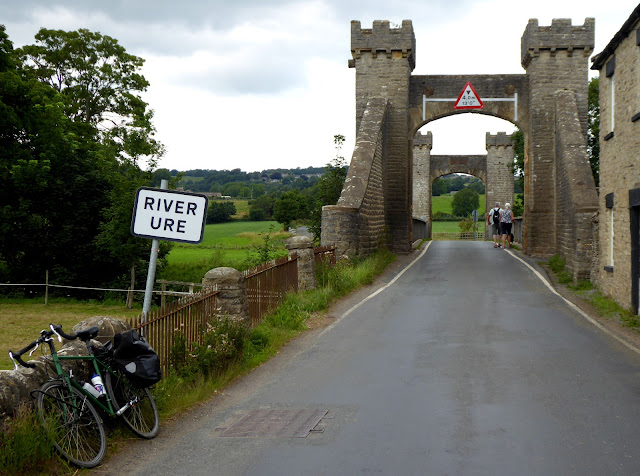 We were impressed by this bridge (pic). Like Telford, we thought.

The engineer, not the new town. 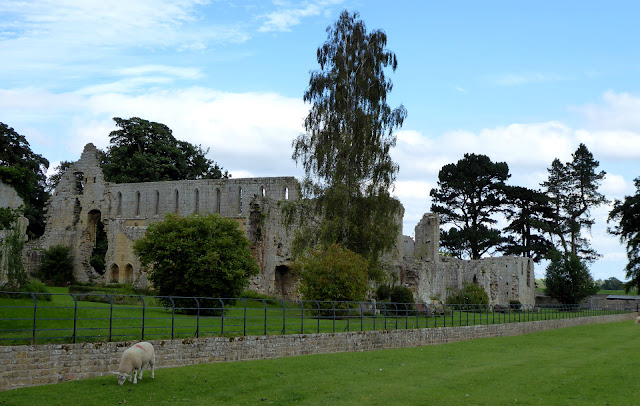 After a quick peek at Middleham, the Yorkshire version of Newmarket (and therefore better), a sneaky shortcut through the grounds of Jervaulx Abbey (pic) took us to Masham, home of Black Sheep Brewery.

We tried to have a pint of said beer at the Brewery’s bar. However, to do so we had to:
(a) download an app to a phone
(b) download a QR reader
(c) run the app, read the QR code
(d) register
(e) think up a password of 36 characters, including upper- and lower-case, numerals, non-alphanumerics, at least one Japanese kanji and a Sinhalese syllabic
(f) go outside to order our drinks
(g) pay online
…all so that the barman standing two metres from us could hand us two bottles that were next to him.

Instead we went to a pub in the square, where ordering a beer involved walking into the bar and:
(a) saying ‘Two pints of Black Sheep, please’.

Refreshed, we dawdled along pleasant (and now, pleasantly, quiet) back lanes to Ripon, Yorkshire’s seventh (and one of England’s smallest) cities, and our home for the night. 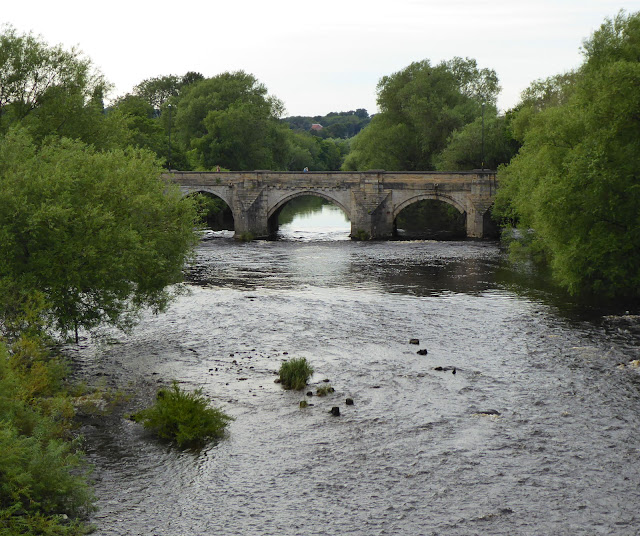 Ripon is sort of on the Ure (pic), but alas, when Wilfrid founded the place in 658 he neglected to establish any upscale marinas, chic waterside bar areas, or riverside restaurants with pavement tables.

So, no evening strolls along the banks for us. We checked into our Wetherspoon’s hotel, enjoyed a post-shower pizza and pint or two, and awaited Ripon’s great claim to fame, the hornblower. Every night at 9pm for 800 years, a watchman has sounded his horn at the four corners of the market cross, one of Britain’s longest-running traditions.

Er, until now. Thanks to Covid-19, they’ve been doing it since lockdown at the watchman’s house instead of the main square. There are several watchmen so it happens at various houses depending on the night. So it’s a bit less of a tourist attraction at the moment. It can’t be very near because we couldn’t hear anything.

Ah well: I have seen and heard the Ripon horn player before, on a previous trip.

We consoled ourselves with a final pint, and by half nine were sound asleep.

Then, by half ten, were woken up again by the noisy beer garden outside.

URE CONFUSED? SO AM I

With the Ure there’s an elephant in the ointment. A fly in the works. A spanner in the room. Because, with this river, names are as slippery as the salmon that ply its waters.

The Ure starts at Ure Head, up in the far northwest of historic Yorkshire. But after about 70 miles, shortly after joining forces with the Swale, and just beyond the clanky wooden bridge at Aldwark north of York, it suddenly changes name. It’s now the Ouse – named, we’re told, after a little stream of that name which sneaks in at Cuddy Shaw Reach.

The Ouse/Ure then continues through York, swallows the Nidd, Wharfe, Aire, Don and Derwent, and finally scrums down with the Trent to form the Humber Estuary not far from Hull.

It’s clearly one and the same river; the Ure/Ouse thing is a distraction. Calling it two separate rivers is like trying to swop your sixty-year-old partner for two thirty-year-olds.
Hence my counting it as one river, one ride: 129 miles, from Ure Head to Trent Falls.

But things go even deeper than the treacherous channels on the Humber. The casual, ignorant observer – me, say – might look at York and think ah: the Vikings called it Jorvik, ‘Yore-town’. The old name for Ure is Yore! Clearly they called it after the river!

Written evidence says the opposite. The name ‘Ouse’ came first. Then ‘Jorvik’ (supposedly a contraction of the Old English ‘Eoforwic’, which sounds unconvincing to me). The name ‘Ure/Yore’ doesn’t appear at all until hundreds of years later.

More complicated still, the dale the Ure runs through – though sometimes called ‘Yoredale’ – is generally called after a (now obscure) village on its banks. Swaledale, Nidderdale, Wharfedale, Airedale, Calderdale – but Wensleydale.

So, to sum up: The Ure runs through Wensleydale. It used to be called the Yore and its waters run through a city whose name means ‘Yore-town’. But that’s coincidence, because by now it’s the Ouse. Then it meets the Trent and becomes the Humber.