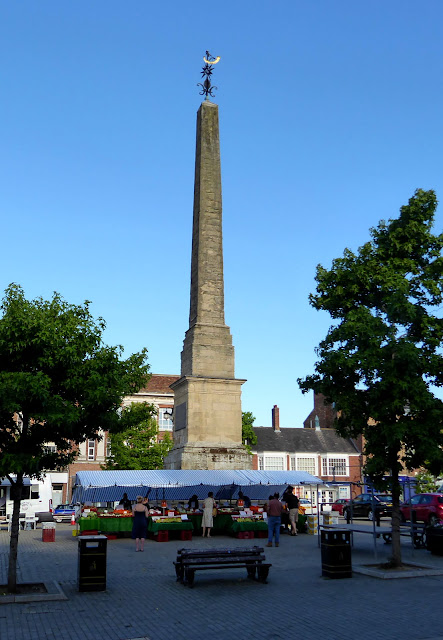 Day 2 of the River Ure ride featured a pig playing bagpipes, a mysterious automatic hand, devilish darts, Roman mosaics, ice-cream at a lock, and a celebration riverside pint in York.

An easy day today, following the river down the flat Vale of York from Ripon’s market square (pic) to York itself. 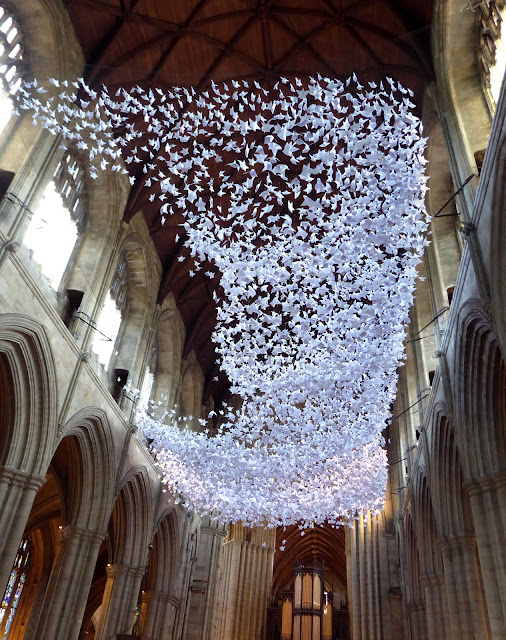 We were in Ripon’s magnificent cathedral as soon as it opened (but well after Gregg’s had opened: I had their bacon roll deal).

It’s an awesome building of course, full of light and spirit, and the installation of a zillion paper cranes (pic) added something ethereal.

I assume they’ve had a fire risk assessment: living in York, we’re a bit touchy about naked flames and cathedrals. 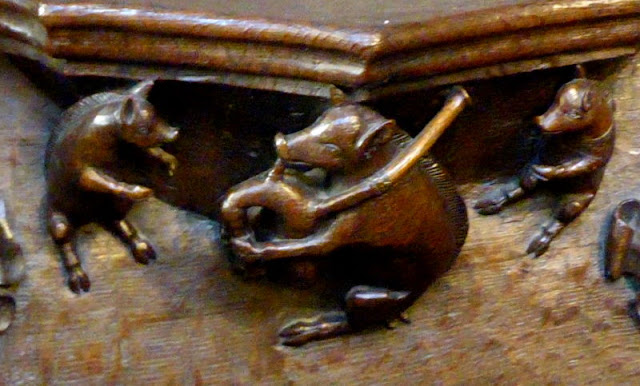 Both of us were taken with this choir-stall carving of a pig playing bagpipes (pic), particularly its attentive audience. What comment is being made here is anyone’s guess. 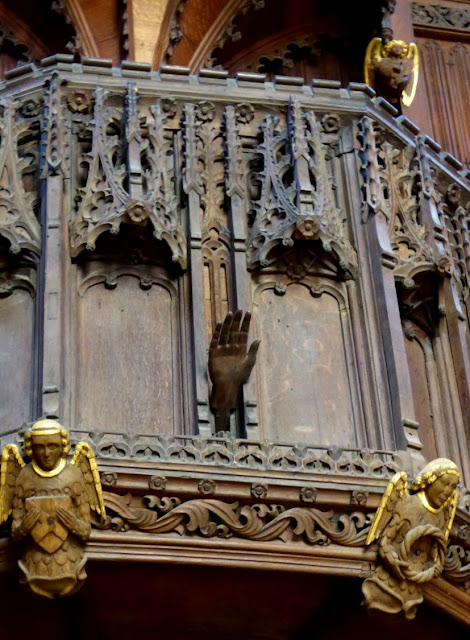 Another item open to debate is this hand (pic) above the choir.

Apparently it’s some sort of mechanical conductor, perhaps pedal-operated by the organist to count the singers in?

Speaking as a former choral singer, I’ve had a few wooden conductors myself in my time. 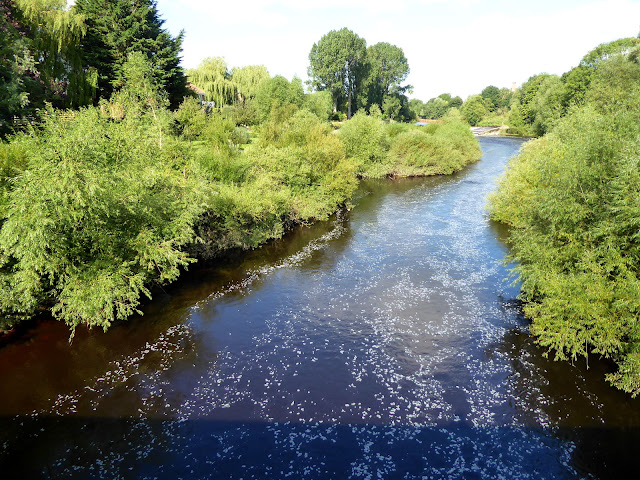 …and we soon got to Boroughbridge’s bridge over the Ure with its surprisingly sylvan view (pic).

The town is clearly bike-friendly (pic) after serving as a significant venue in the 2014 Tour de France.

It’s also darts-friendly, thanks to the remarkable sight of three prehistoric monoliths, known as the ‘Devil’s Arrows’ (pic).

Needing just 27 to win, apparently Satan lost it, got banished to a pit for a thousand years and was thrown into a lake of fire. 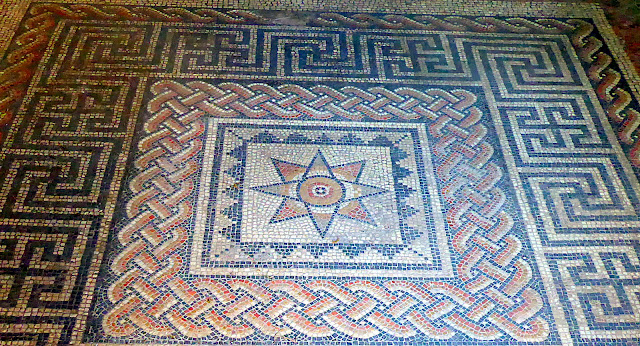 Next to Boroughbridge is Aldborough, once a Roman town of some note and wealth, as two decent-ish mosaics (pic) demonstrate. If anyone looks at my floor in 1800 years’ time they may find less to admire. Perhaps the stain of that dropped bottle of Malbec will have disappeared by then. 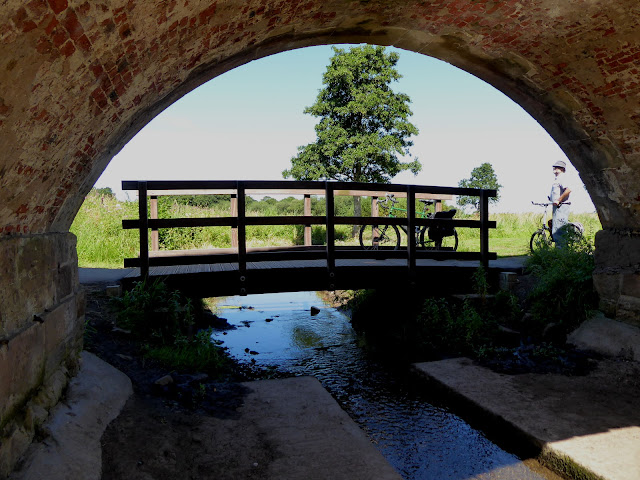 Quiet, lovely lanes took us through the Ouseburns, and to Ouse Gill Beck (pic).

Now, if you believe everything you’re told – and, having worked with Tory politicians and BBC journalists, that’s something I’d warn against – you’d say that the River Ure changes name to the Ouse here because this stream joins it.

That’s right: the Ure, a proper river, so wide it’s only road-bridged once between Boroughbridge and York, is supposedly renamed after a dribble of water that a three-year-old could jump across. 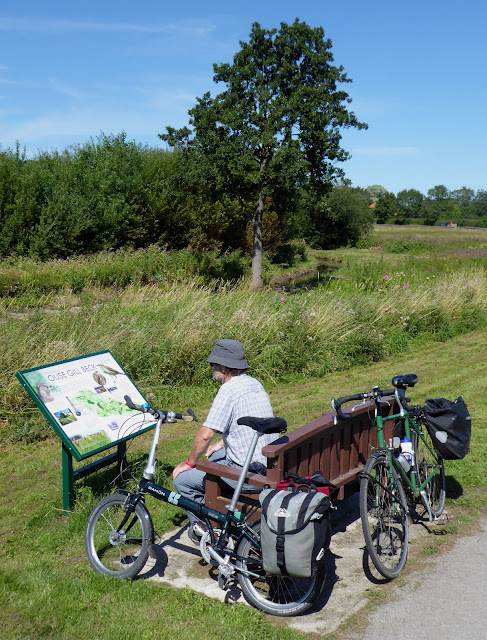 I can believe that the Ure historically was called the Ouse after its confluence with the Swale. That’s at Swale Nab, a few miles upstream from Ouse Gill Beck’s invisible contribution; the place where Ure and Swale decide amicably to collaborate.
My previous ride ended there, and it’s hard to say which is the bigger river. It seems almost unfair to favour one of the names after they join forces; so why not a new name?

As a modern-day egalitarian, not some stuffy old imperialist believing the superior dominate the weak, the notion that the Swale and Ure work together to create something new, the Ouse, appeals to me.

So, in my book, or at least my blog, the Ouse is the continuation of the Ure (and its equally important partner the Swale). 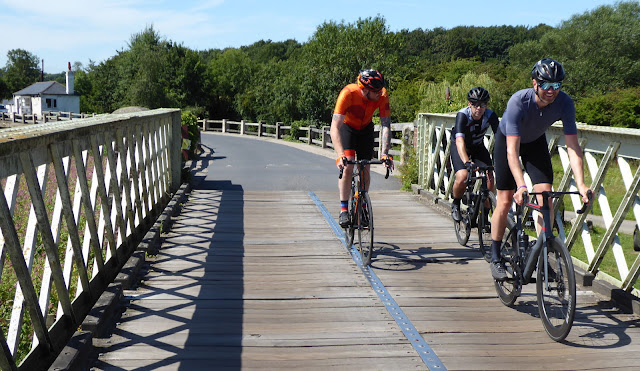 I stopped halfway to take some snaps, and thought it would be nice to have some cyclists in the frame. I waited for these three to appear (pic), and saw to my surprise that, quite by coincidence, I knew one of them: Scott (right) was doing the 170-mile Way of the Roses, from Morecambe to Bridlington, for charity, in ten hours.

When I last did it, I took three and a half days. I was carrying a tent, though. 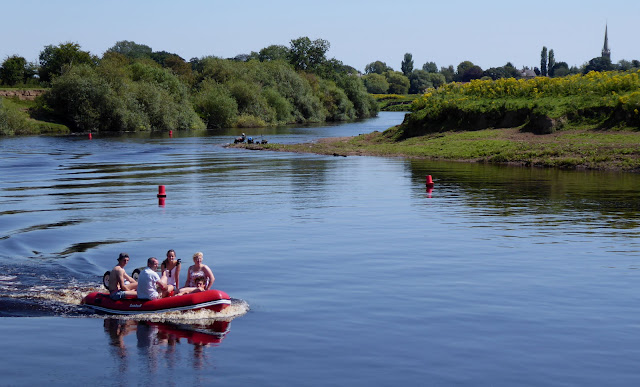 At Linton Locks the river, now swollen with the raging torrent of Ouse Gill Beck, has a broad weir and picturesque bend (pic)… 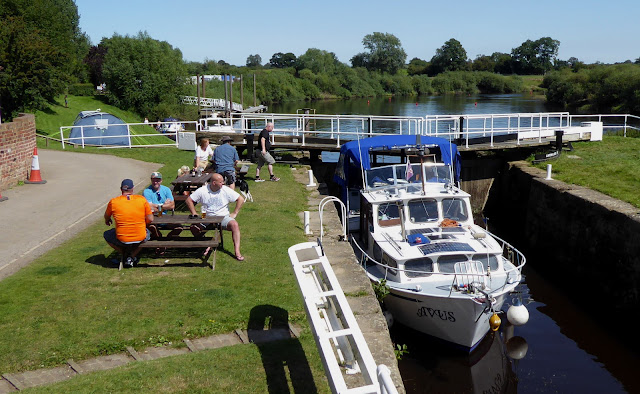 …and lock (pic) and, more interestingly for us, a cafe which served us and dozens of sunseekers with ice-cream. Actually most of the sunseekers were also swigging lager, but we preferred to wait until our finish at York for our pint reward.

The final stretch to York is one of the loveliest on the whole river: a cycle route runs right by the water for the last few miles (pic). 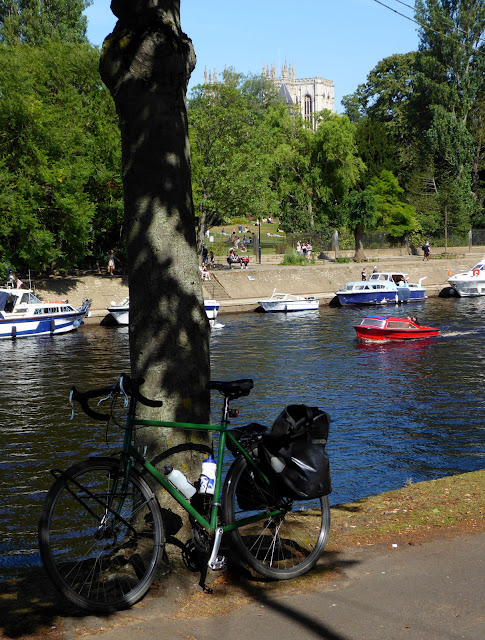 All familiar territory to me, of course. I live here and have done these bits dozens of times.

The Minster above the river is still a delightful sight on such a sunny day though (pic). 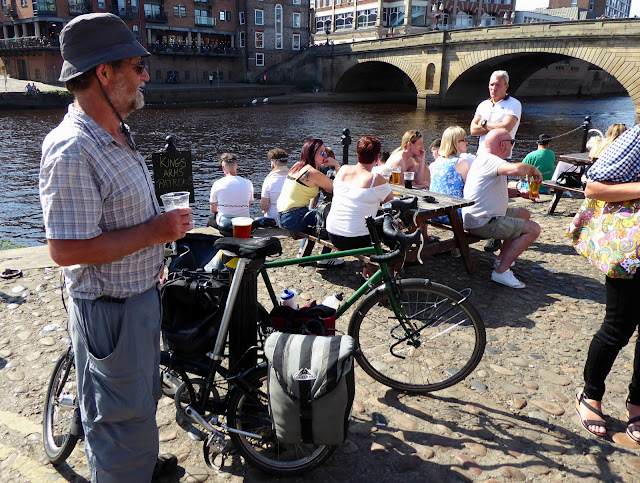 So I had the luxury of my own bed tonight, but Tim was heading back to Cambridge. So we celebrated our ride with a pint of Sam Smith’s at the only Ouseside pub opportunity in York, the King’s Arms (pic).