Day 3 of the River Ure ride was the climax of the whole project, finishing at the point where all the rivers become the Humber Estuary. It featured a dog weeing on a bike, a 1980s Iron Curtain border, fish and chips, the Ouse Riviera – and it was a scorcher. 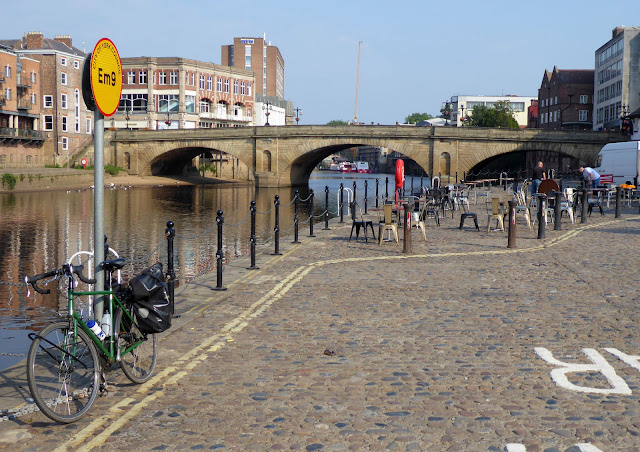 After a couple of days of admin at home, I carried on from where I left off with Tim on Saturday, though the morning riverside terrace of the King’s Arms (pic) was now devoid of boisterous, tattooed lager drinkers. 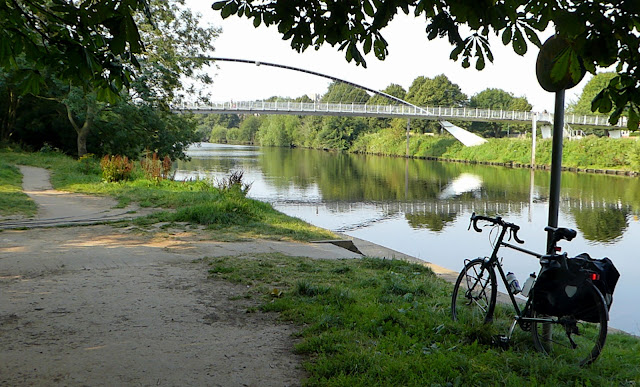 The Ouse (as the Ure is called here) is a delight to ride along, thanks to official and unofficial cycle paths by its side. It was too early in the day here for the ice-cream boat, which is usually on the river by the sign here. Just as well: on a sunny day like today, I might have got myself a Lemon Curd 99, and then not much further. 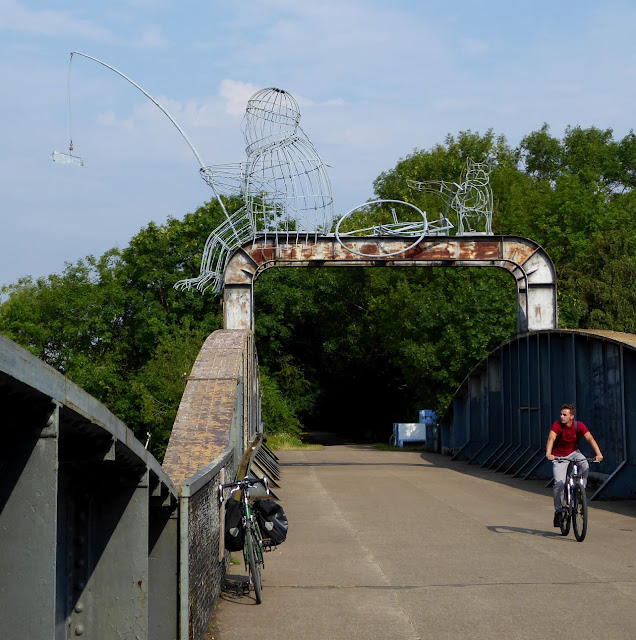 I carried on down the riverside paths to Fulford and then past the sewage works – yes, you could tell it was a hot day – to the old railway bridge which crosses the Ouse at Naburn.

It’s the old East Coast Main Line: not a Beeching casualty, but closed in the 1980s because of mining subsidence.

The wire sculpture, called Fisher of Dreams, shows a man catching a train (geddit?) while a dog shows its opinion of the cycle parking facilities. 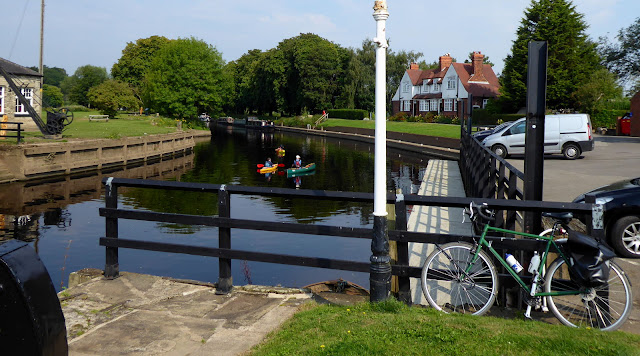 A bit further down is Naburn Locks (pic), which today had some kayakers and daytrippers enjoying the cafe, and below which the Ouse gets all tidal. Below this point you may sometimes see a bore. [Insert your own joke here].

The 19th-century swing bridge across the Ouse at Cawood puts me in mind of a pre-1989 Eastern European border crossing. Luckily my papers were in order.

I had fish and chips for lunch in Selby. Add that to the heat and the stiff headwind, and it’s no wonder I got through five litres of water. 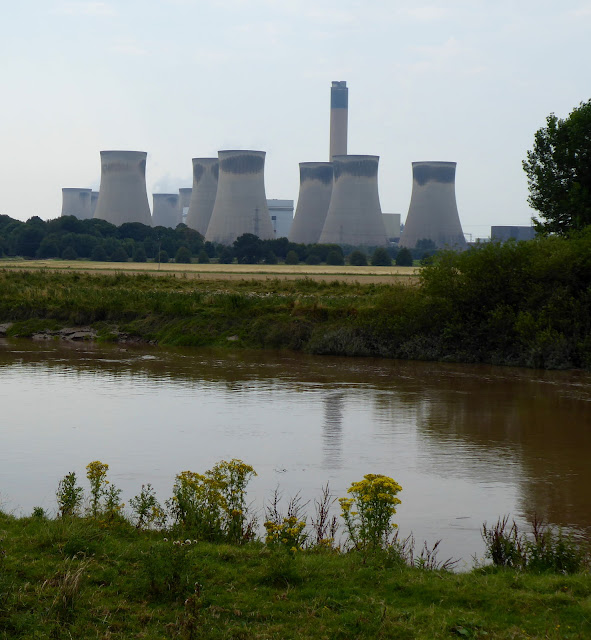 From Selby, the Trans Pennine Trail runs mostly along the banks of the Ouse. The river is pretty scruffy here, and the backdrop of Drax Power Station makes it unlikely to feature in a ‘Yorkshire Seasons’ calendar.

The path surface is pretty ropey, too: it was just bumpy today, but usually it’s muddy too. Thanks to the heatwave, the cow poo covering the track had dried into dung cakes that could power a household for a year, relieving the pressure on Drax. It did seem an appropriate comment on the National Cycle Network though: some routes are just full of… yes, exactly: good ideas badly implemented. 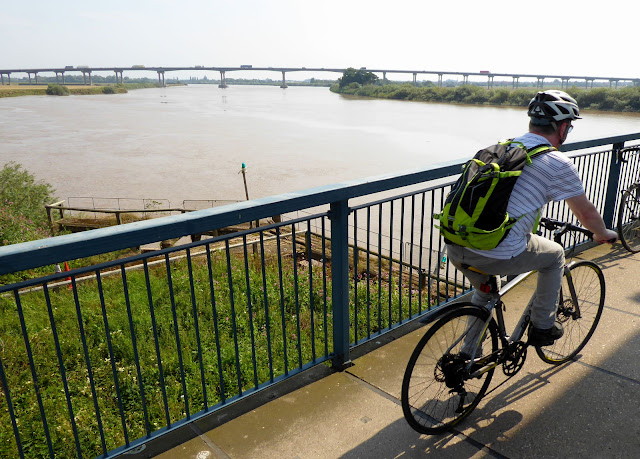 Boothferry Bridge was the furthest downriver road crossing of the Ouse until the M62 arrived to vault over it (pic). For cyclists it still is your last chance to choose sides before Goole. Choose carefully: once west, your next opportunity is sixty miles round at the Humber Bridge. 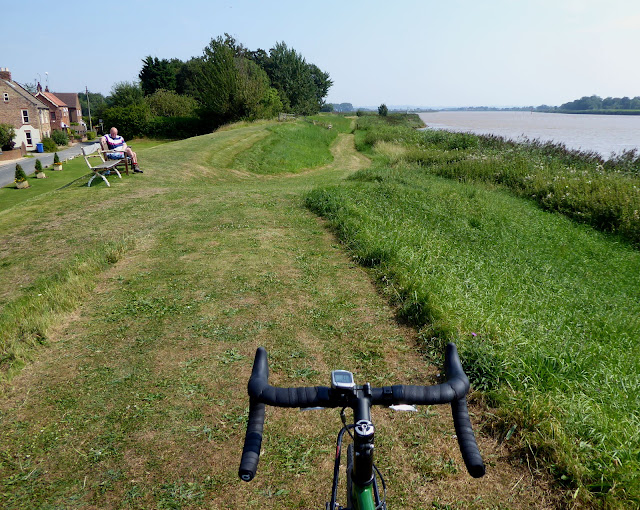 And so to the final stretch of the Ouse, all mudflats and nature reserves and Larkin’s ‘level drifting breadth’. Saltmarshe offered a short but pleasant levee ride (pic). And yes, it’s salty round here. And marshy. 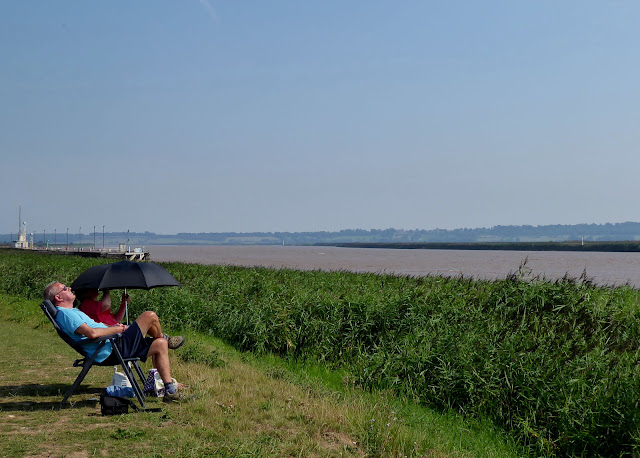 The Ouse Riviera was a place for sunseekers today (pic). Somewhere in the distance, looking east, the Trent looms from the south/right to scuffle with the Ouse and form the murky, silty, gloomy Humber.

This, the waterfront of the Hope and Anchor at Blacktoft, is about as far as the Ouse goes, though the exact triple point of Ouse/ Trent/ Humber is hard to specify: it’s somewhere by Faxfleet, the next village along. The pub was closed today, so for my celebration pint I had to carry on to my mum’s in Ferriby.

Here is where all the rivers I’ve ridden along in the last year and three-quarters end up. Swale, Ure, Nidd, Wharfe, Aire, Calder, Don, Derwent: they cover almost all of the historic county, and seeing them each from source to mouth has been a fabulous set of cycle rides.

I’ve seen Dales, Pennines and Moors; pretty villages and ugly post-industrial towns. I’ve ridden trekkers, folders, tourers and town bikes. I’ve met so many people, but fortunately managed to get away before they could engage me in conversation.

It’s been a great way to explore my home county.

What next? I’m curious to see what I come up with.