I rendezvoused with Tim here in Taipei last night, and we picked up our hire bikes today from a branch of Giant Cycles at lunchtime. Or, as my body clock thought it was, 4am. 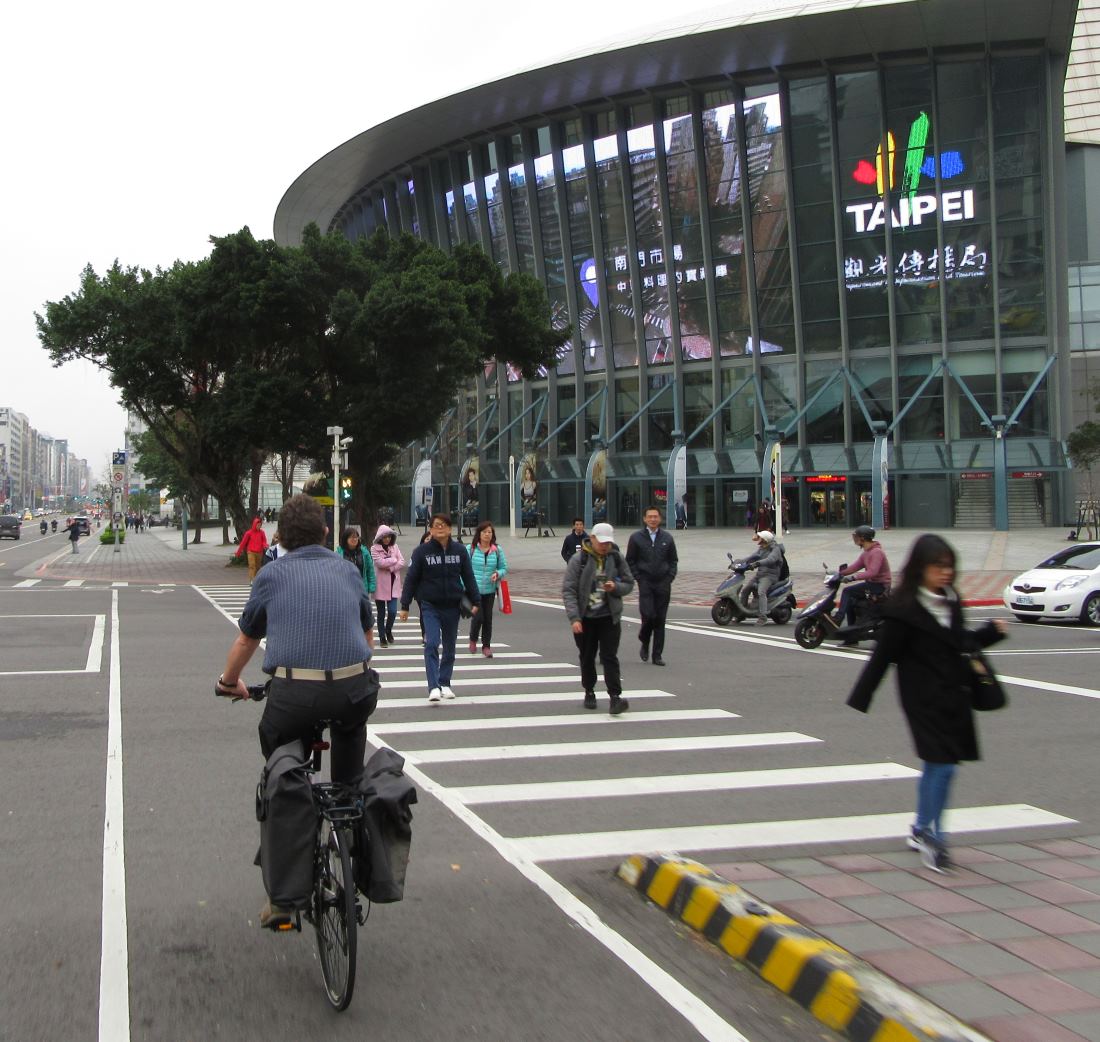 Taipei is a very bike-friendly city. You can cycle on the pavement, and many people do. This seems to cause no friction with pedestrians: it’s a courteous culture. There are also widespread cycle lanes (pic), often having priority at junctions, and being largely continuous, wide, consistent, and well-marked. You never have to share the road. Given that the taxi drivers here are as impatient and selfish as anywhere else in the world, that’s just as well.
At £100 for a carbon-fibre tourer, complete with panniers, for 15 days, Giant bike hire is excellent value. The only surprise was the lack of mudguards. Clearly it never rains here. In lush, tropical Taiwan… 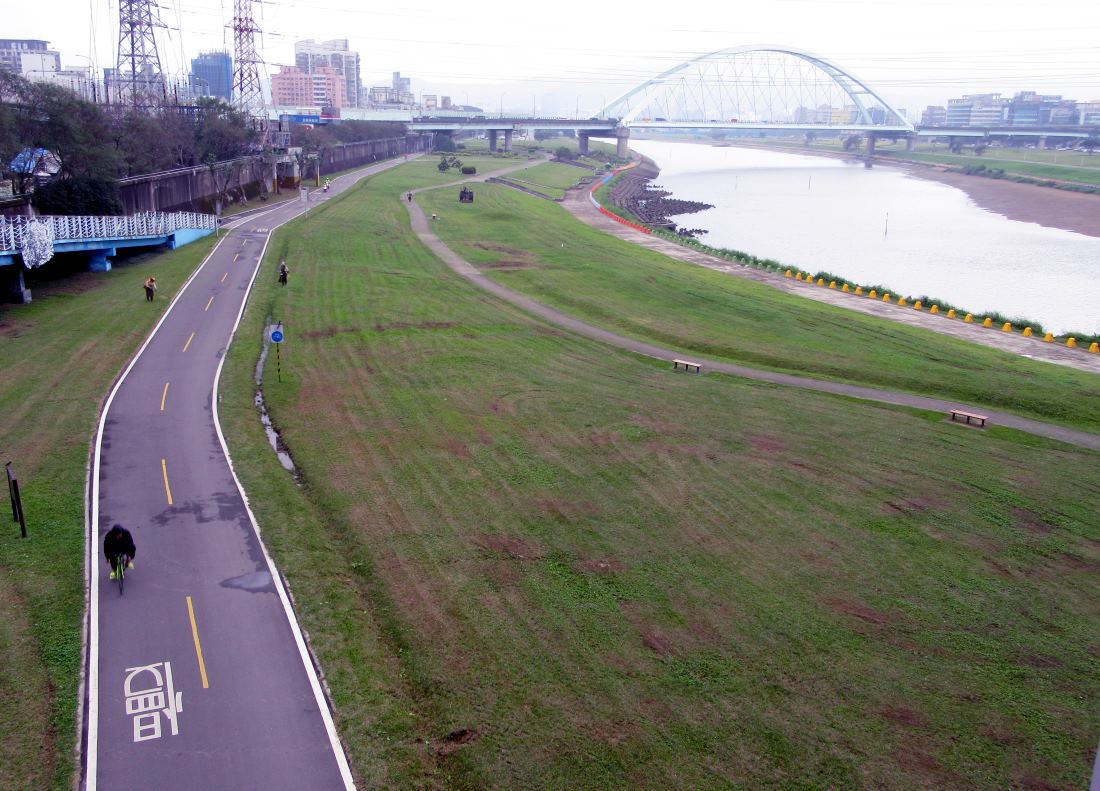 …where the rivers have wide flood plains and high flood defences (pic). Taiwan has some excellent long-distance cycle routes – which is why we’re going to cycle from the north end to the south – so the rivers here have superb well-surfaced cycle tracks. 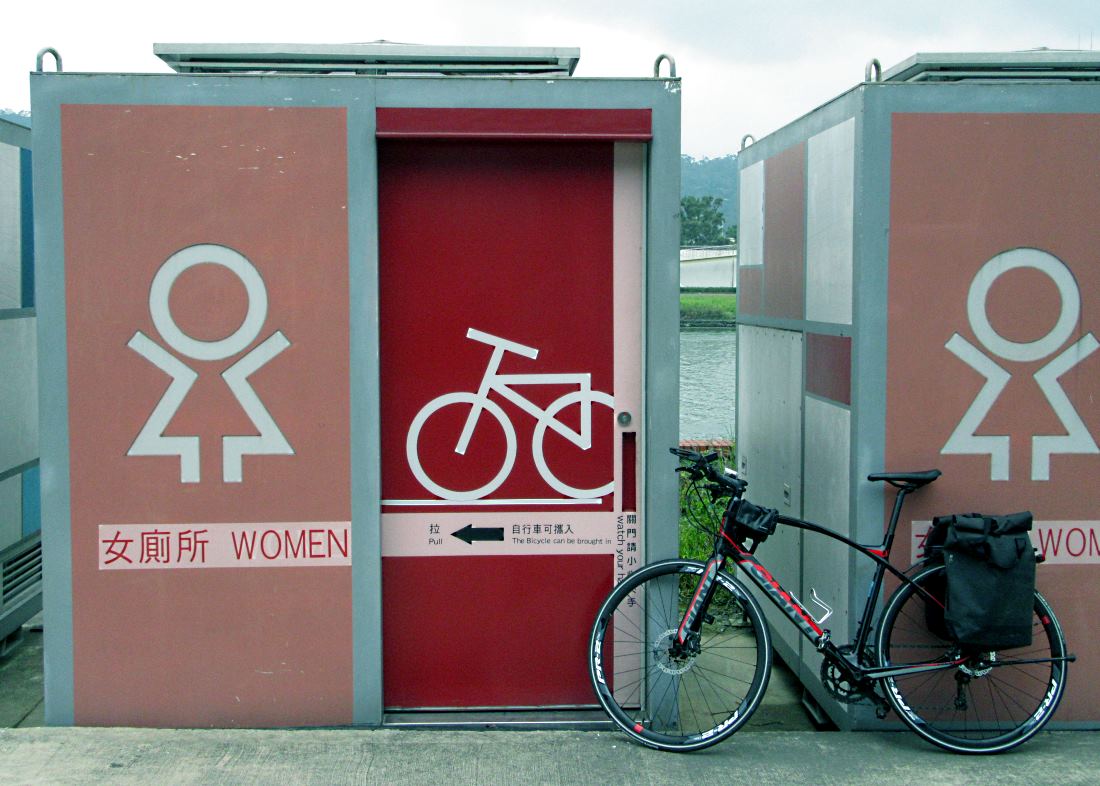 And lots of toilets, into which you are expressly invited to take your bike (pic). 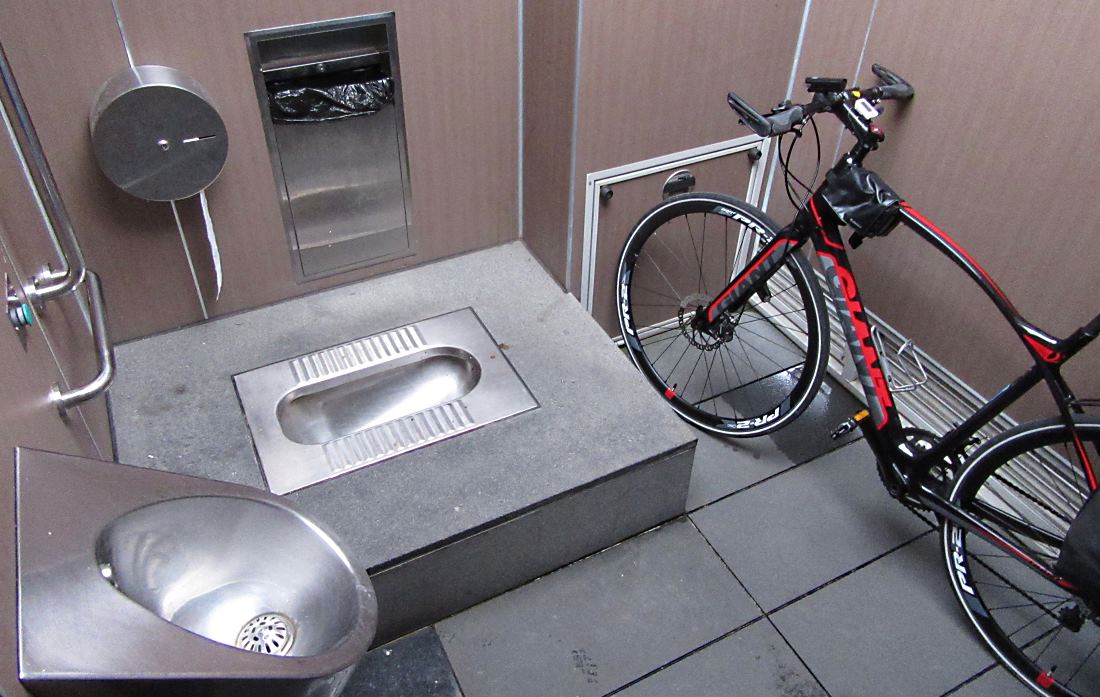 We should introduce this sort of toilet (pic) into Britain. Well, apart from the squat-pattern khazi.

Actually, thinking about the hostility to cyclists from certain parts of society, the squatting bogs might be more acceptable. 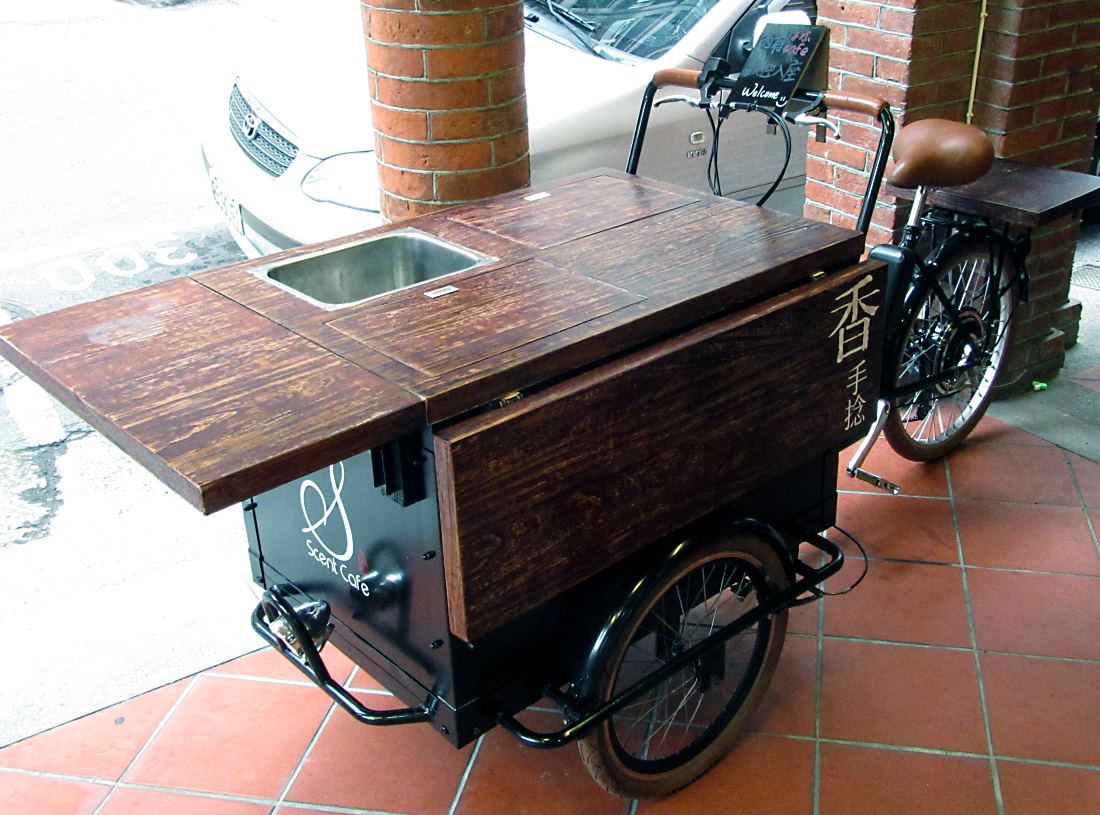 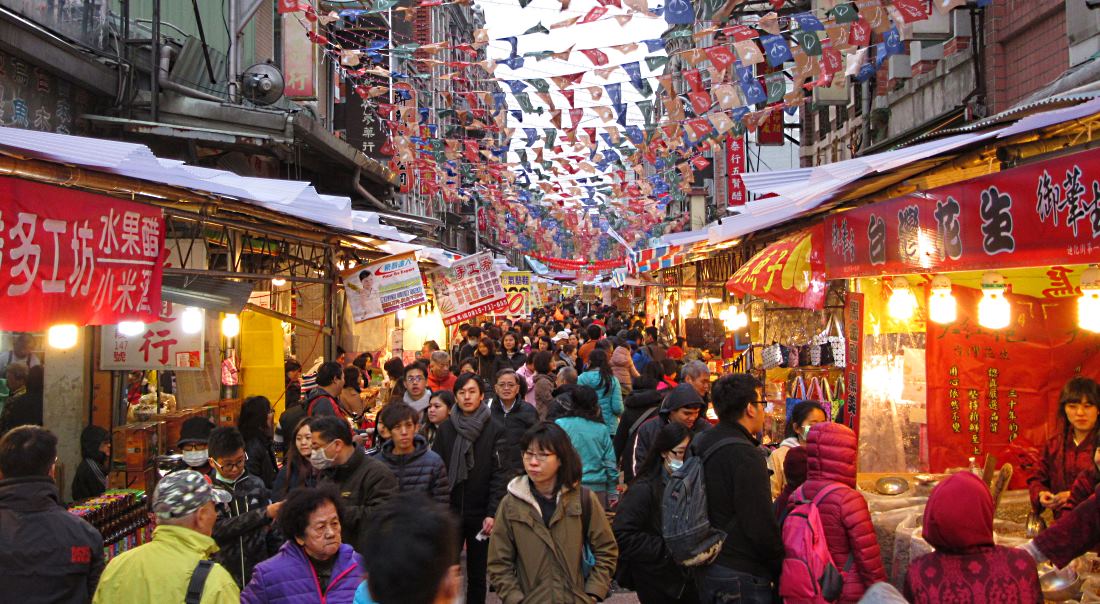 Dihua St is Taiwan’s historic shopping thoroughfare, and is at its busiest right now, in the run-up to Chinese New Year. We spent the evening there, among the good-natured crowds (pic). 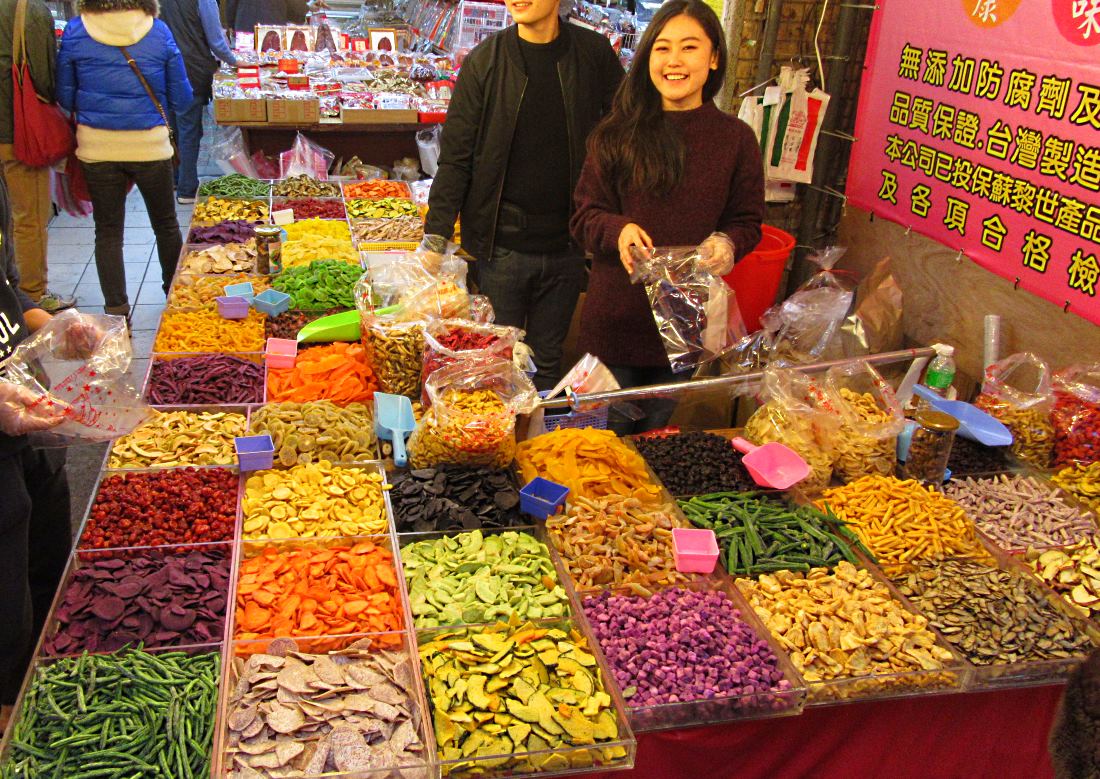 There’s an unimaginable range of food and drink, much of it more colourful than we’re used to in the west (pic). I enjoyed some taro milk and sushi, then Tim and I adjourned to a nearby night market for some very tasty Stinky Tofu. That’s not a mistranslation. As anyone who inadvertently enters our hostel room tonight will find out. Of course we’ll blame Tim’s laundry.