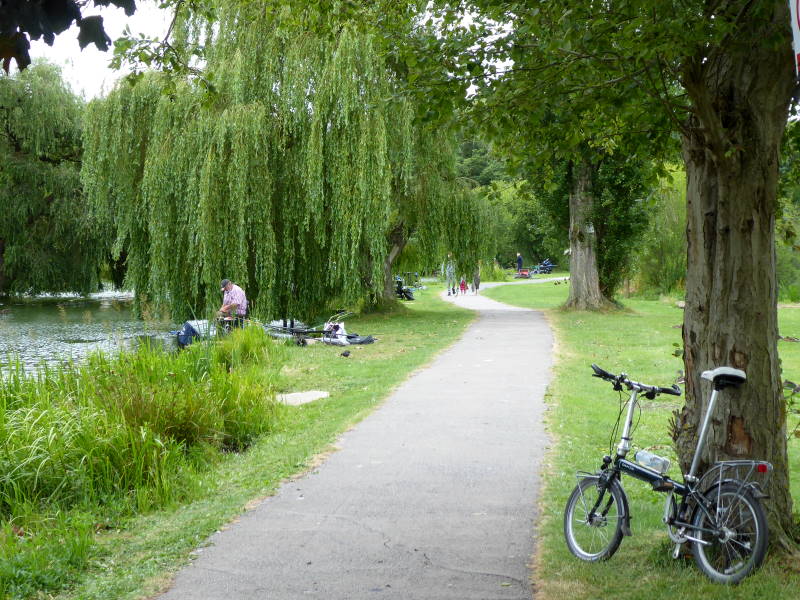 Little Switzerland; Little Germany; Little Canada; Little Denmark; Little Holland. Yorkshire contains many miniature foreign countries, and I’ve cycled the lot. Which is most convincing? Answers revealed below. But first, today’s trip, in which I completed my globetrotting-at-home set with Thorne. The small town outside Doncaster is nicknamed ‘Little Holland’ for its supposed resemblance to the Netherlands, having flat landscapes, a canal and a windmill.

First impressions, arriving on the train that plies the Doncaster to Hull route, were favourable. Lots of, yes, flat terrain. Just outside the station are some fishing ponds, fringed with willowy greenery and paths. Quite Dutch in feel, though the cafe didn’t have any ten-euro pancakes. A good start.

The canal was the obvious next stop, a short ride up the road. This one’s the Stainforth and Keadby, built in the late 1700s to link rivers Don and Trent. Hmm. A nice, if brief, towpath between a lock and a ped swing bridge, and some jaunty narrowboats and barges, but you wouldn’t mistake any of the housing or architecture for Amsterdam or Utrecht.

Further east on the canalside lane you’re in the flatlands that Dutch engineer Cornelius Vermuyden helped drain in the 1600s, the beginnings of the fens that go down to Cambridgeshire. And indeed, this largely horizontal world would have been familiar to him, albeit with wind turbines instead of windmills.

Ah, yes, windmills. Thorne has one, on North Eastern Road – alas, long disused and now derelict. The entrance was full of building rubbish.

Thorne boasts a motte from a classic motte’n’bailey castle, but of course that’s Norman, from 1070 or so, and not very low-countries. Though the top of the mound could well be the highest point for several miles around.

Of course, there’s one sure-fire way to tell if you’re in the Netherlands, rather than some reclaimed-land-wannabe: the cycle infrastructure. Thorne, like most of Britain, has none worth mentioning. There are some amusing cycle-shaped parking racks, which are excellent so long as you don’t actually want to lock a bike to them.

I passed through Yorkshire’s Helvetica last year, during my ‘Bridge to Bridge’ traverse of the county. It’s an old quarry, now a woodland park, just by the north tower of the Humber Bridge.

The rocky glades, sultry greenery and picnickable meadows might just fool some people into momentarily thinking they were in Switzerland, perhaps, particularly if they were just regaining consciousness.

But no archers shooting at their apple-bedecked sons, no alphorns, no cuckoo clocks, no secret bank accounts, and no horribly overpriced fondue cheese restaurants. Win-win, then.

In the late 1800s, Bradford was a big deal. Now, the biggest deal is probably the meal-plus-pint in Wetherspoon in the square, but then it was a thriving textile town. An influx of German immigrants looking for a better life – yes, it really did go that way back then – established a community here. (One of Bradford’s main streets is Hammstrasse.) The big-money central area of grand factories and Victorian buildings just east of the train stations was, and still is, known as ‘Little Germany’.

Sadly, despite the signposts, the most Germanic thing about a visit there now might be almost getting run over by an Audi. You’ll look in vain for a Stehcafe or Bierstube. Walking round in a Lederhosen or a Dirndl may not be the best idea.

Northwest of Doncaster, a few unremarkable miles along the Roman Ridge cyclepath, is South Yorkshire’s bit of the Americas. The hamlet of Little Canada grew up in the early 1900s, getting its name from the supposedly New-World look of the wooden houses and prairie-like wheatfields. Google Maps still shows it named as such.

The fields are still there, but the shacks are long gone, replaced by modern houses that could be anywhere. Scruffy nearby woodland is the closest you get to the Great Canadian Wilderness, and at 4,000 miles away, that’s not close.

The only notable sight on my visit today (it’s not far from Little Holland, so I combined the two) was an installation-like string of bras, fronting a domestic garden, repurposed as planters. All it needs is a pretentious artsy commentary and it could win the Turner Prize.

The white bluffs and cliffs round Flamborough Head, just north of Bridlington, have been called ‘Little Denmark’ in the past, apparently. Though online references are few, the area round the dramatic chalk headland and its fishing past really do look quite Danish.

Flamborough boasts lighthouses old and new, and there’s a popular cafe out on the cliff-edge where you can enjoy the wide sea views – perhaps before or after a walk up to Bempton Cliffs to see some of Britain’s hugest seabird colonies, puffins and all. Not un-Danish in its straightforward natural feel, and you might just score something vaguely appropriate in the cafe for breakfast, such as a pastry, or a pint of Carlsberg. Probably.

And the winner is… LITTLE DENMARK!