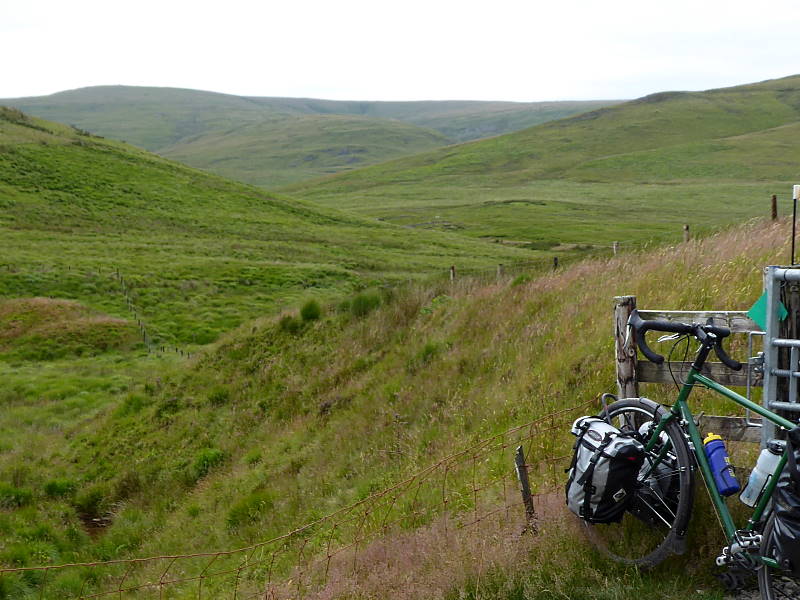 This is a leisurely cycle-camp down the 130-mile River Wye. (Route map below.) Day 1 featured a bit of Japan on a house, a pub Dylan Thomas never drank in, remote reservoirs, a puncture, and the source up in the mid-Welsh hills just a stone’s throw from that of the Severn. Please don’t throw stones by the way.

Why the Wye? Because the Severn and Thames may be longer, but like most Twitter accounts, trying to follow them will only cause you hassle and anger. Whereas the Wye has quiet roads along it, or at least near it, for most of its length, and – unusually, because most big rivers get flat, marshy and boring in their later stages – its valley scenery gets even better as you go along it.

In fact, the final twenty-odd miles from Ross-on-Wye to Chepstow was the birthplace of British tourism, and gave us the word ‘picturesque’.

Less enticingly, the Wye is also full of chicken poo thanks to too many poultry farms, but that’s no problem for cyclists unless you’re planning a skinny dip or two.

Anyway, today I was heading for the source, up in the hills northwest of Llangurig, in remote, hard-to-reach mid-Wales. But then most of Wales is. After a lengthy train journey from York that had me not so much looking at my watch as looking at my calendar, I finally reached Borth, a seaside resort on the west coast just north of Aberystwyth.

Borth’s beach didn’t look particularly inviting this damp morning, but the main street proved surprisingly interesting thanks to several jaunty residential murals with a maritime theme. I was particularly taken with the rendition of Hokusai’s tentacular waves in front of Mount Fuji, taken of course from his famous set of woodblock prints, Thirty-Six Views of Obscure Welsh Beach Resorts.

From Borth I started the long haul up into the hills of mid-Wales. I stopped for refreshment at a pub in Tal-y-Bont. As the blue plaque on it explained, it is notable for the fact that thirsty poet Dylan Thomas never drank there.

I took the thrilling, steadily ascending, narrow back road – virtually every road in mid-Wales is a narrow back road, as anyone who’s tried to drive across it will know – up to Nant-y-Moch reservoir. It wasn’t quite as spectacular as some (such as the nearby Elan Valley reservoirs for instance) but I was pleased to be in wide-open landscapes after seven hours of train carriage.

A humdrum stretch of A44 took me to the former mining area east of Plynlimon’s mountain top. The old works – now home to an adventure centre – is covered in chalk tracks, some of which go to the source of the Wye itself.

Curiously, that’s only a couple of kilometres from the source of the Severn, and the two rivers take vaguely parallel but very different feeling routes from there to Chepstow, where they meet again. A chalk-track bridleway links to the two sources, so it’s possible to do a grand cycle loop: starting in say Chepstow, going up the Wye, cycling from its source across to that of the Severn, then following the Severn back down to Chepstow. A fantastic trip, apart from the bit alongside the Severn.

To reach the actual source – an unprepossessing squelch of bog up in sombre high hills – would have involved a long walk, and I was happy to get close enough by bike to see it from a distance of a mile or so. My feet were dry and warm and I wanted them to stay that way.

So, with official starting photographs duly snapped, I set off down the length of the river. Downhill all the way from here to Chepstow…

After losing half of its drop height from source in the first couple of kilometres, the Wye quickly sets the lush, flat, green-valley tone for the rest of its course. A few miles of said chalky bridleway got me back to the A44, and the short hop to my farm campsite west of Llangurig: it was early evening already.

Oh: a puncture, no doubt caused by a thorn picked up or at least hammered in on that bumpy bridleway. Fortunately the campsite was only about three re-pump-ups away. Once there I could mend it at leisure amid hills, sheep and birdsong, rather than building lorries taking skips to Aberystwyth.