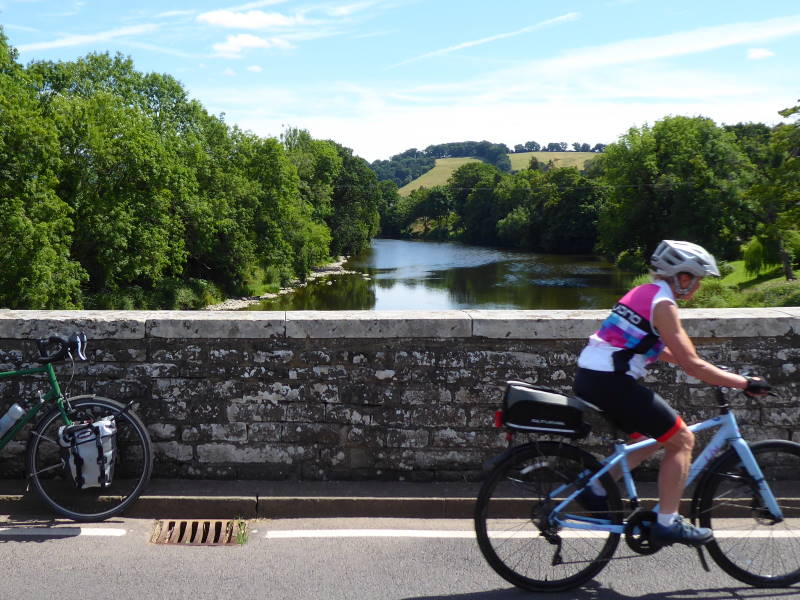 Day 2 featured a fence made of gravestones, a coach road that would make you sack your coach, biking barbers, a chance encounter, and a wasp sting not by a wasp.

An early start. My puncture repair work was evidently successful: the back tyre was still firm this morning. I headed to Llangurig through the valley, already wide and impressive even though the Wye is only a handful of kilometres old.

I’ve cycled the super-scenic Wyeside lane between Llangurig and Rhayader a few times before, notably on my Welsh End to End in 2020, but never this way.

As before, it was empty of people, which suited me fine. People make me nervous and want to make excuses and leave, but then people probably say the same about me. Any road, I was pleased to see along the way the bits of fence made from stone slabs that had the macabre effect of a line of tombstones.

The verdant valley scenery continued south of Rhayader past Llanwrthwl, pronounced as it’s spelt, but I wasn’t impressed with National Cycle Route 8 as it took the old coach road south from there. A warning sign – coming rather too late; you’ve committed to the route when you reach it – advises you that it’s scenic but rough and muddy, and it’s about two-thirds correct. There are a couple of Instagram moments overlooking the expansive valley, but mostly what you see is scrubby trees either side and often-unrideable rubble underfoot. Goodness knows how the coaches managed. A life on the stage? No thanks.

Still, I pushed through it, often literally, and decided to take the quick option south of Newbridge on the by-passed old main road, which proved delightfully free of traffic, and scenic enough. I had a riverside picnic lunch by the bridge at Builth Wells, shaded from the now blistering sun, cooling my feet with a quick paddle. Chicken poo notwithstanding, they still came out less smelly than when they went in.

I dawdled so long I was in danger of needing a haircut. If that had happened, I could have had a snip at the Biking Barbers. Except the shop was closed for lunch, so I couldn’t find out if they had cycling-themed haircuts on offer. Short back and side pulls? Shampoo and chainset? Wheel trim?

A long, pleasant B road shadowed the river’s east side, nice and quiet thanks to the main road taking away the traffic on the west bank. I admired the old train station and loco at Llanstephan rest area and sat down to consult the map over a swig of water and…

OW! Ow! Something ow the size of a wasp ow but not a wasp because it was ow ow black was OW on my left thumb and OW OW stinging me OWWWW.

On the Schmidt scale of pain – devised by a field entomologist whose work has seen him stung hundreds of times by all sorts of species – I’d say this was a 3 (of 4), perhaps equivalent to a Tory cabinet minister stabbing you with a red-hot needle while siphoning off your tax to their personal offshore account.

A little groggy and steering essentially with one hand, I ploughed gamely on to my campsite outside Hay-on-Wye. A cyclist drew up beside me, intrigued by my heavily-laden tourer, and enquired about my trip. I started to explain with my customary needless detail when…

Rob?, said Jack. Jack?, said Rob. It was my fellow cycling writer Jack Thurston, author of the brilliant Lost Lanes series. He lives around these parts, and our paths have often crossed since we both lived in London in the early part of this century. He was out on a casual day ride, so we carried on a couple of miles to the Honey Cafe at Bronllys.

Jack sensibly rehydrated copiously and had lunch. I however decided to embrace the Wye/ Welsh theme of my trip, so wolfed some bara brith with a bottle of ice-cold Wye Brewery lager. One-handed: that sting was hurting and my thumb was inflating like a hot-air balloon.

I carried on to my simple campsite outside Hay. It lacked some of the facilities of the farm site last night, such as a personal wooden table and bench, but benefited from others, such as a pub opposite.