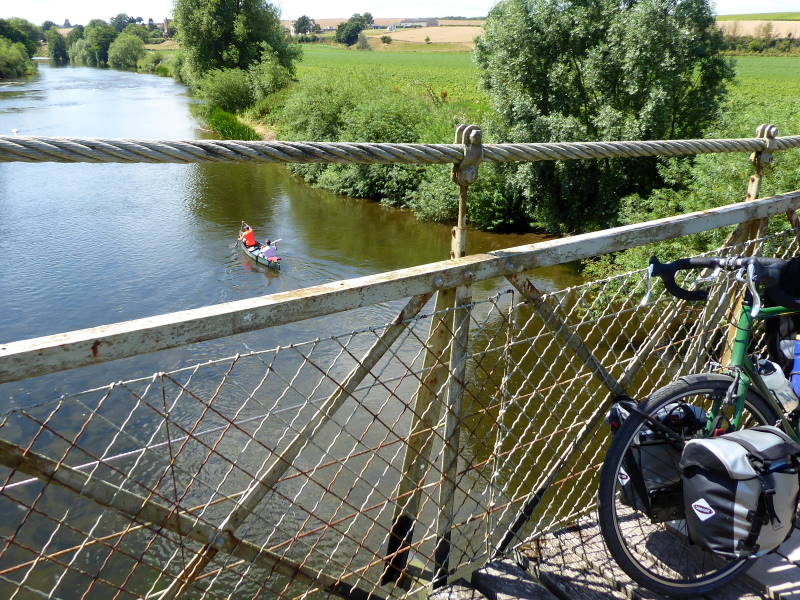 Day 3 featured ‘book town’ Hay, a cyclist called Elgar who like me also composed a bit, Hereford glimpsed, pedestrian bridges that could double as fairground cakewalks, and an idyllic pub-camping spot.

I was away early. The market in Hay-on-Wye was just setting up and most shops – which in Hay, means bookshops – were not yet open.

The town’s bibliophile status dates back to 1961, when Oxford grad Richard Booth opened up a bookshop in the old fire station, perhaps inspired by the book-burning dystopia of the 1953 film Fahrenheit 451. There are now over a dozen. I was more interested in sourcing a pork pie for later picnic use than a Jane Austen first edition though.

I struck east then south-east towards Hereford. After the ridgetop views north over the Wye valley, and over the Moor Tower folly, though, there wasn’t much to see from the flat country lanes and roads. I didn’t really see the Wye itself until I got to Hereford – a town I didn’t need to explore today, having done it reasonably thoroughly a few weeks ago for an article.

So, no dropping in to Hereford Cathedral to see the Mappa Mundi (the map of the world from 1300 which shows the Wye).

I followed the riverside path through the centre and out southeast over the new ped-bike bridge.

I couldn’t resist a snap of the Edward Elgar silhouette south of the bridge: the famous cycle-tourist lived here in the early 1900s, exploring the countryside comprehensively by bike. He occasionally composed the odd piece of music too, which gained him some local fame.

The rest of the day was an amble round quiet lanes, crossing the Wye by bouncy old suspension bridges that would have been familiar (and then brand spanking new) to Edward.

Yesterday’s non-wasp-sting – which I now decided, after online research, was down to a Spider Wasp, which isn’t a wasp but a hornet – was taking full throbbing effect, and the thumbside half of my swollen left hand now resembled a boxing-glove.

Still, it was nothing a quick bit of medication couldn’t alleviate, so I headed down a very scenic ridgetop road into Ross-on-Wye to source some, at the Wetherspoon. Well, I needed the shade: it was a full-on afternoon blaze.

Duly medicated, I trundled to the White Lion, just over the bridge. What a find! The riverside pub has a small flat grass area the size of a tennis-court, between pub patio and river on the bank of the Wye, which they let for non-motorised camping. I cooked myself up a hearty dinner on my ancient Trangia stove in the evening sunshine, with a pint, right next to the river, enjoying a quick paddle too.

Riverside cycle-camping comes no better than this in my book. All I have to do now is write the book.