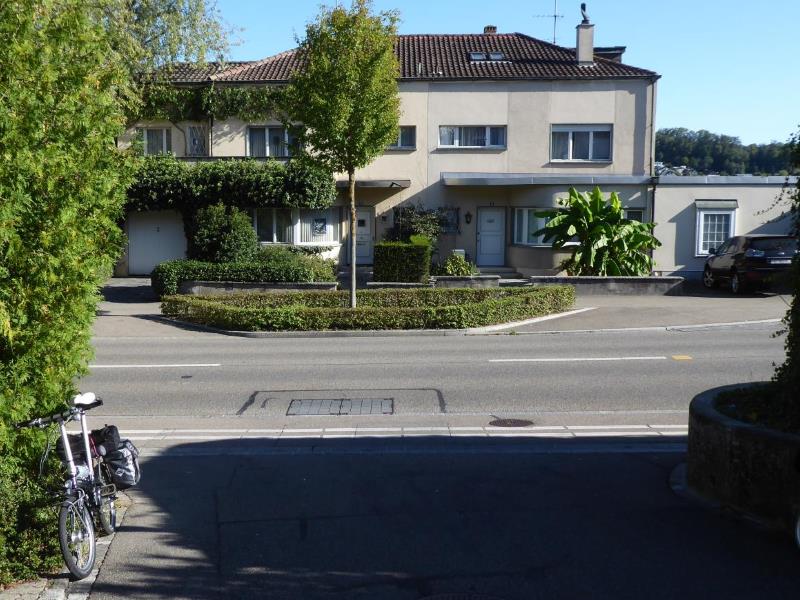 This morning we followed in the footsteps of the world’s first ever bike trip. Literally. Because, on 19 Apr 1943, research chemist Albert Hofmann rode 8km from his lab in central Basel to his house on the outskirts while high on a certain substance he’d just synthesised: LSD.

It’s a very dull, yet also utterly fascinating, ride. What must it have been like for Al, his field of vision a swirling, hallucinated fireworks display? Buildings turning into flowers, trees coming alive to dance, buses talking and sounds turning into colours? Did he remember to avoid getting caught in the trams tracks, and to give way to the right at crossroads?

We stopped halfway up to have a drink and snack at a supermarket opposite a school, so I got some sort of kick from my rather delicious custard’n’jam pastry. It was home time, and the car-free access path was chocker with parents on box bikes picking up their kids, as well as commuters zipping past. Like many Swiss towns, Basel has a lot of cyclists, and the infra’s not too bad.

Anyway, Al made it home in one piece, thanks perhaps to the watchfulness of his assistant, and went straight to bed to sleep off his unintentional overdose. He tried LSD several times later, but at the max on only a tenth of the whopping 250 micrograms he’d taken before his bike ride. His pioneering mind-expansion commute is celebrated by many pharmacological enthusiasts every year who cycle the same route, hopefully without quite so much chemistry involved.

Hofmann’s house is a salubrious semi in a well-to-do residential district. It’s on a main road on a mild hill south of the centre, though nothing that would require any amphetamines for a 1960s Tour de France rider.

We enjoyed the downhill freewheel back to the city centre and crossed over the Rhine to get back to the station via the old town. Our brief jaunt in Basel was over; we had a train to catch for Freiburg back in Germany. It had been a good little trip, though.

Not quite such a good trip for Albert. But as he went on to live to be 102, it evidently didn’t do him too much harm.

e2e.bike > Other > Interrail > Interrail 9b: Basel, faulty – the world’s first ever bike trip