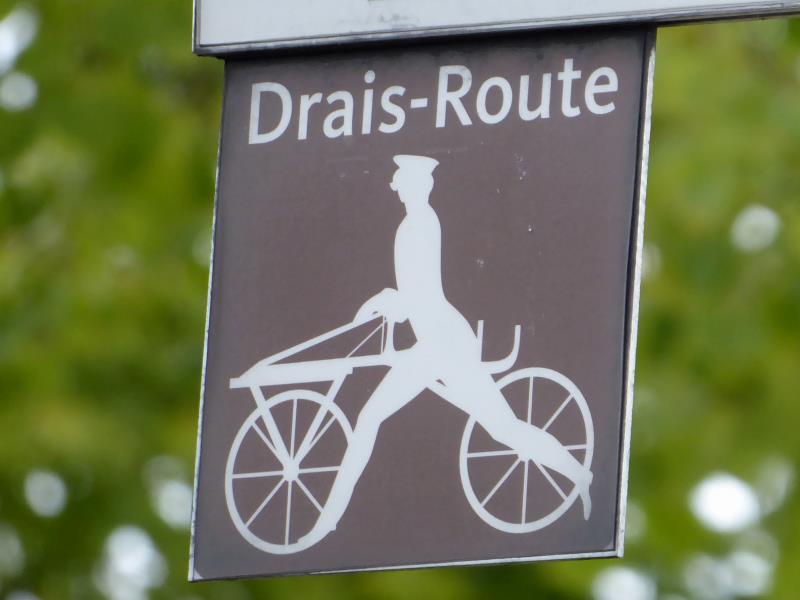 This morning we followed in the footsteps of the world’s first ever bike ride. Literally. Because, on 12 Jun 1817, Carl von Drais rode-and-scooted 8km from central Mannheim to a coaching inn and back on what was soon called a draisienne, and what we’d now call a balance bike.

It’s a very dull, yet also utterly fascinating, ride. What must it have been like for Carl, gliding like a skater to the astonishment of passers-by? He went this way because the coaching road out of Mannheim was highly unusual in being smoothly surfaced. Like most roads in Britain now.

Today it bores functionally past industrial estates, car concessions and bathroom retailers, but I was pleased to see a postie delivering mail on the yellow cargo bikes still used for such things. This was, after all, one of the many uses Drais envisaged for his invention.

Britain discontinued posties’ bikes in the 2010s in the name of modernisation. Because there’s nothing more modern than inactivity, resource squandering, carbon emissions, noise and pollution.

Whatever the case, eating and drinking was out of the question for us. The inn that Drais knew, built in 1767, burnt down in 2015. It was arson, an insurance job: the former owner of the property was nicked for fraud, and sadly the future of the Relaishaus’s charred shell is uncertain.

We learned this from a local campaigner, Sven, who came up to chat. He was clearly the right sort of person, keen to restore and preserve this wonderful piece of history for future generations, to make it once more a community hub for eating and drinking and socialising. Otherwise it may be bulldozed and turned into anonymous flats for someone’s quick buck. Good luck, Sven: we need more like you.

The Drais-Route back to the train station took us through not unpleasant flat fields past the edge-of-town stadium, impressively provided with cycle paths and tram access and acres of bike racks, none of them used today of course. Back in the centre we lunched and hopped on the train to our next retracing experience of the day, half an hour south, just over the Swiss border, in Basel…

Mannheim is industrious, a place of innovation. It was a hotbed of orchestral experimentation in the late `1700s, with stylistic developments such as the Mannheim Rocket (not a vehicle engineered by Carl Benz, but an upwardly explosive scale). And in addition to the bicycle, it gave us the motor car (yes, Benz is the culprit), the oil-fired tractor, and most importantly for some, ice cream that looks like spaghetti.

But it’s obviously Drais’s proto-bicycle and first-bike-ride that I’m most interested in. So, finally, here’s what I wrote about Drais’s pioneering journey in 2017 for a Cycling Plus article. After writing so confidently about it, I very much enjoyed the chance today to actually, er, do it…

The bicycle is about to turn 200 years old. On 12 June 1817, German inventor Karl Drais made the world’s first recorded bike ride. He went from his house in Mannheim to a local coach station – where he probably became the first person to be told they didn’t take bikes – and back. Eight miles in an hour: my sort of touring pace.

Okay, so it was ‘only’ a hobbyhorse (as the English dubbed it) – two inline wheels with seat and handlebar, scooted along by the rider’s legs using the kick-and-glide technique of ice skaters. Still, the feat caused a sensation. Soon after, he rode through the Black Forest to Baden-Baden, thus becoming the world’s first mountain biker, and presumably first to sport a muddy stripe up his back.

A hobbyhorse craze ensued. Some rich boys just used them indoors to get around their mansions; others made journeys of over 300 miles. A Briton crossed the Pyrenees on one, no doubt pestering his friends to donate to a worthy cause such as Apprenticeships for Chimney Boys, or Curing the Left Handed.

The machines, costing about two or three months’ wages for a teacher, weren’t cheap. But that’s what some people pay for a top-end road bike today, and they don’t come with pedals or mudguards either.

Drais (a social progressive too, incidentally) was way ahead of his time. He pioneered what we’d now call the 27in wheel size, brakes, panniers, tandems, tri-bars and bike brand names; he was a utility cyclist, tourer, downhiller and road rider. He was also familiar with the sound of grinding gears, except not on a drivetrain – his other inventions include the household meat mincer.

Unfortunately, anti-cyclists were also quick off the mark. Bad road surfaces forced riders onto footpaths, and some outraged pedestrians responded by creating their own, metaphorical, hobbyhorse. They complained to local

Drais’ genius was to recognise that stability is dynamic, not static. The secret is to keep going forward

newspapers so much about pavement cycling that the ‘bikes’ were banned in Europe and the US.

The genius of Drais was to recognise that stability is dynamic, not static. As a physicist and mathematician, he knew that, counter-intuitively, you’re more stable with two wheels in a line than three in a triangle, provided you continue moving and can steer the front one. Like life, the secret is to keep going forward. If you stop, you fall over.

In the last few years, Drais’s creation has reinvented itself. It’s now a training aid for toddlers: the balance bike, essentially a tiny cycle without pedals. And so, with historical authenticity, it’s still used mainly on pavements.

Balance bikes beat stabilisers, because those only help a child learn to pedal, not balance. Take off the supplementary wheels and the kids can be left floundering. On balance bikes, children naturally learn the paradox of steering into the direction they’re leaning, and develop that stable momentum. Adding pedal power later on is simple. It fast tracks them on to proper bikes – as I know from my nephews, who each became confident and accomplished cyclists by the age of six.

The standard portrait we have of Karl Drais shows a smiling, approachablelooking chap, the sort you could swap cycling tales with over a schnapps. It’s appropriate. Because my nephews spent all their balance-bike-riding hours with expressions of childlike delight, and they brought nothing but smiles from all the grown-ups around them on the footpath.

That pleasure in being on a bike – independent but interactive, in control but spontaneous – is still there for them, and for me too. There will be lots of balance bikes under Christmas trees this year, and a lot of happy faces. A toddler on two wheels charms everyone. So let’s salute Karl Drais, he didn’t just invent a machine two centuries ago; he invented the joy of riding.

e2e.bike > Other > Interrail > Interrail 9a: Mannheim rocket – the world’s first ever bike ride