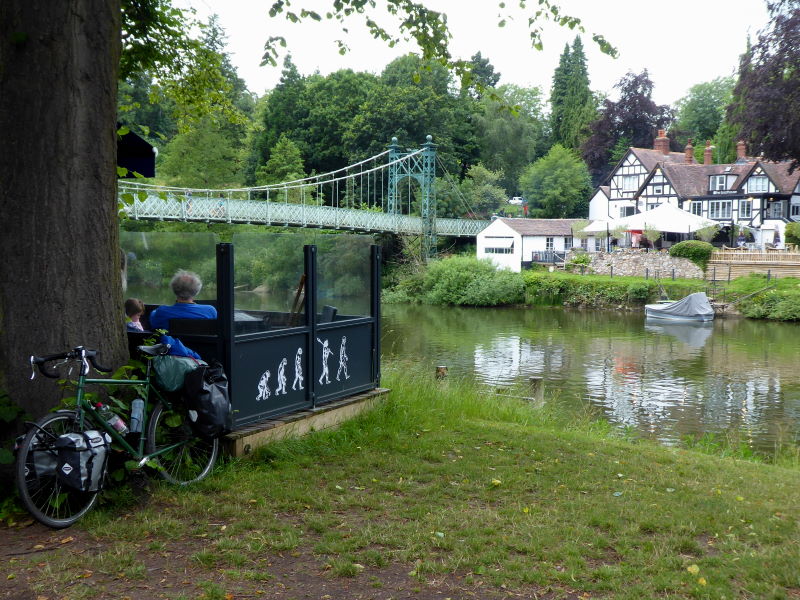 The morning was silent, save the gentle throb of hangovers from the neighbouring tents. A short day in prospect today, with the Welsh hills behind me. And the Shropshire hills in front of me.

I explored Welshpool, which didn’t quite have the picturesque centre I imagined, though I got a glimpse of the canal towpath I missed yesterday.

I tried the main roads for a bit, thinking they might be Sunday-quiet, but aha, I’m thinking of Sundays 1971, not Sundays 2021. They were busy and stressful with lots of close passes, so I took off along some minuscule side lanes. In contrast to the main road they were hilly, but also in contrast they were quiet and delightful, and I got some fine views of the border hills.

The long straight (and rather busy) B road through Yockleton got me to Shrewsbury. I dawdled round the lovely riverside path, mildly buzzing with strolling and cycling families, and ambled through the centre.

I was amused to see a sign chiselled into the stonework of Welsh Bridge urging us to COMMIT NO NUISANCE: apparently that means ‘don’t wee’ in Victorian.

I’m afraid that, when cycling through countryside, I can’t rule out committing the odd nuisance myself here and there.

Most of the rest was a slog along a B road through several heavy showers to Newport. However, just outside Shrewsbury were the vast and impressive ruins of Haughmond Abbey, with a pleasing view of the hills to the west. I’d never even heard of it before.

I wandered round imagining monastic life seven centuries ago, the gentle buzz of the brothers in the refectory discussing theological principles, swopping notes on mead recipes, and complaining about being close-passed by that wagon just outside Shrewsbury.

So to Newport, and a bit of luxury: a Premier Inn room, only £35 despite being booked yesterday, thanks to Sundays being so quiet. To my delight I picked up two huge marked-down boxes of sushi from Waitrose, profiting further from the Sunday effect: it was half three, they closed at four, and I got £15 of the stuff for £4. Ah, we cycle tourists know how to get the best value.

I can promise you, there are few things more satisfying that eating sushi and sipping white wine in the bath in a Premier Inn room, shared only with your bike. I had a rather pleasant evening.

e2e.bike > Other > Route research > Geneva to Florence 4: Welshpool to Newport