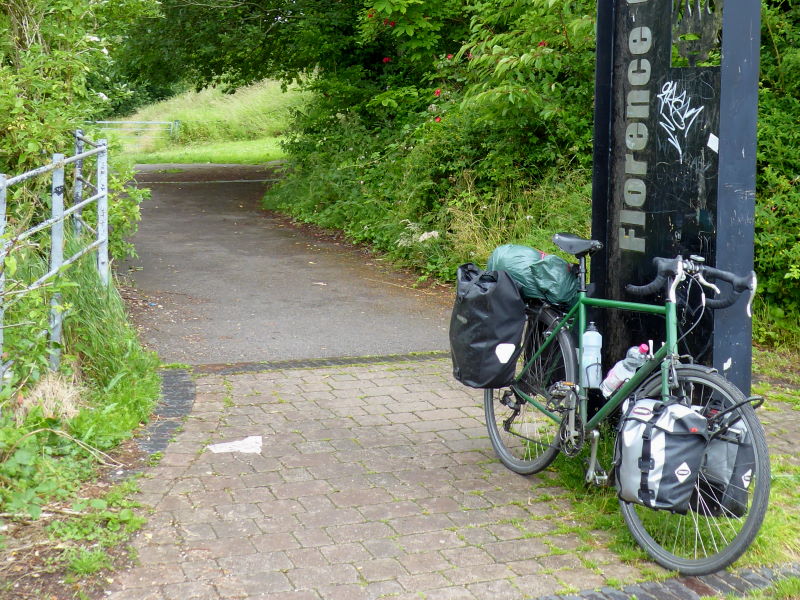 Little back lanes through little back villages got me to Eccleshall, a handsome small town that has more than you’d expect from something of this size: craft-beer bars, artisan bakeries, Young Offender Institutions. After some thought I decided the most appropriate of those for me just now was the artisan bakery, and snaffled a gourmet hog roast sausage roll.

I took B roads to Stone (which I visited last year while researching routes in Stafford) and crunched along the decent canal towpath to Barlaston, just south of Stoke, and just west of my destination, Florence.

The name seems to come from Florence Colliery, opened in 1874 and closed 120 years later, rather than any resemblance to the great Italian cultural capital.

It’s a rather mundane suburb, with standard-issue British housing stock, and certainly no equivalent of the Uffizi: the nearest art gallery is Stoke Museum, which was closed for refurb anyway.

There’s the New Florence pub, a Florence Sports and Social Club, and a roundabout called Florence, but I couldn’t find an Italian restaurant.

There is also Florence Greenway, which sounds like a 1960s US civil rights campaigner, but is in fact a pleasant but brief cycle path.

Anyway, I took the old main road a couple of miles into Stoke for my train home, and that was it: Geneva to Florence, British-style.

No alps, but I’ve enjoyed some of Wales’s most awesome scenery, the gentler slopes of Shropshire, some delightful cycle-camping, and friendly locals almost everywhere. Four and a half days among the mountains very well spent, and all without flight-shame.

e2e.bike > Other > Route research > Geneva to Florence 5: Newport to Florence