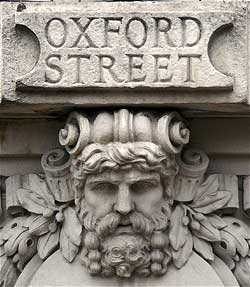 Oxford St – an aching east-west mile-and-a-bit of footslogging from Marble Arch to Tottenham Court Road past bully-brand chains and character-free shops – is said to be Europe’s busiest shopping street.

It’s an old Roman Road, which explains its straightness – and atmosphere of battle. We don’t like cycling along Oxford St at all. Though most of it is free from private cars, the rest is a narrow conduit for impatient buses and taxis which jostle with each other for the entire space between one set of traffic lights and the next. 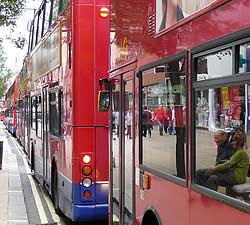 You end up getting off and walking, only to find that the pavements are even more congested with pedestrians. There are bits of cycle parking here and there – not enough though.

The street is home to lots of famous retail names: Moss Bros, Selfridges, John Lewis, Debenhams, House of Fraser, HMV, Disney, Topshop, Primark, Gap Nike, Adidas, and possibly Britain’s most recognisable city-centre brand, Closing Down Sale. Selfridges used to have a branch of Cycle Surgery inside it, but they moved out a few months ago. 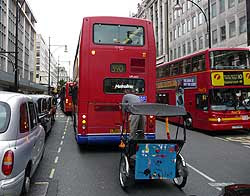 There’s quite a rivalry between Oxford St and Regent St’s associations, apparently, reflecting the usual British preoccupations with lower (Oxford) and upper (Regent) classes. It’s detailed in Tim Moore’s very amusing book Do Not Pass Go, a trip round all the London Monopoly locations. And, unlike Regent St, Oxford St’s site acknowledges bikes, with a page listing cycle parking opportunities (they claim 179 stands ‘close to Oxford St’ and list streets nearby with 358 more spaces). So you can imagine where my sympathies lie in the green-set battle.

Oxford St’s Christmas illuminations are fun, and the best time to cycle is Christmas Day, as part of Southwark Cyclists’ very sociable and popular 25-12 ride (they don’t like to mention the C-word; bit of a touchy subject to some of us). Because, on this day and Boxing Day, there are no buses and very few taxis, making it the only time of the year when the street is actually fun to explore by bike. 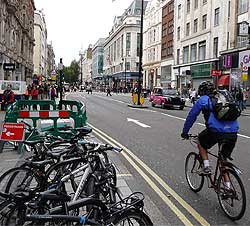 Monopoly’s Oxford St costs £300. What could this buy you there? With three hundred quid in your pocket – just a minute, I’m sure it was in this pocket – what the?… – you don’t think it’s anything to do with that dodgy-looking group of youths that jostled us as we were coming out of the tube station checking the map do you?… what d’you mean, you can’t find your purse..? …