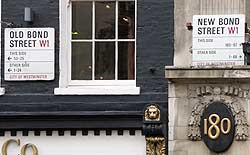 London’s swankiest shopping street – and some may feel there’s one S too many in that description – is not actually called Bond St. It in fact consists of Old Bond St and New Bond St, running on from each other: half a mile of posh boutiques heading south (it’s one-way all the way) from Oxford St down to Piccadilly.

According to the Bond St Association website – which, unsurprisingly, does not mention anything about cycle parking – it is a “playground for society’s most stylish and influential people”. Which at least explains the childish behaviour of some of the drivers trying to find a parking space there. 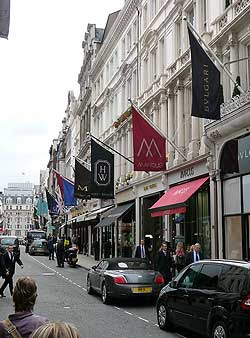 Clothes and jewellery are the main things on sale here, neither of which subjects I can offer expertise on.

If you do want to visit Bond St by bike to buy a two-grand dress or twenty-grand ring, though, be prepared for an argument with one of the sour-faced security guards in a cheap suit and corkscrew earpiece guarding the shop. They’ll tell you to move your bike and not lean it on the window and imply that you should sod off because you might scare the stylish and influential people away.

At least, that’s what you assume they’re telling you, because they only speak one language, which isn’t English. It’s the international language of paid bullies: Nonsense. 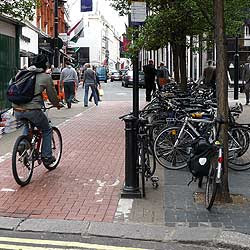 Motor traffic here mainly consists of taxis transporting haughty-looking women; and sports cars capable of doing 175mph, which seems a touch irrelevant in central London. However, they can’t go down the entire length of the two Bond Streets, no matter how much they paid for their vanity number plate, because of a barrier two-thirds of the way down. There’s a neat cut-through for bikes here, though.

Monopoly’s Bond St costs £320. What could this buy you there? Not much. A cheap pair of earrings, maybe. Anyway, if you’re specifying budgets in mere hundreds of pounds, you’re probably in the wrong place.