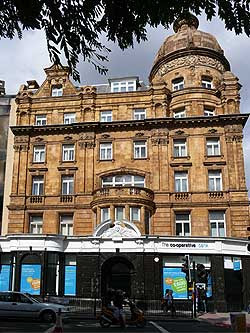 The Angel, Islington isn’t a street or locality. Originally it was a pub, then a tea house. In the late 1930s, Yorkshire-based Waddington’s Games sent down their MD Victor Watson and his secretary Marjory Philips to scout for London locations to put on the US game they’d just bought the rights for. Vic and Marge, it’s said, had a tea and cake at the Angel, which was then a Lyons tea house, and celebrated the fact by putting it on the board.

The building that was the Angel is now a Co-operative Bank (right). It stands at the top of Pentonville Rd, on the corner of the crossroads from which Islington High Street – aka the A1 – runs northwards. Just follow the road to Edinburgh. 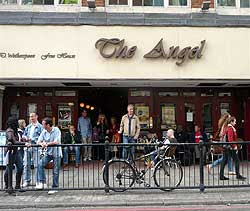 There’s a tube station here, also called Angel, named after that original pub. But even more excitingly, the building next door to the original Angel is now a Wetherspoon’s pub, also called the Angel (right). The railings outside form a handy bike park.

So while it’s not exactly authentic, it’s an ideal place for a quick bit of refreshment after that long climb up Pentonville Road or St John Street. (What a shame there isn’t a train terminus on that last one, because it would be St John St St.) So the English Monopoly is the only version in the world that has a pub as one of its squares.

Monopoly’s Angel costs £100. What could this buy you there? As usual in Wetherspoon’s, a pint of Ruddles is just £1.99, while a perfectly decent burger’n’chips lunch is just £4.69 including a free pint. So with a hundred quid you can afford to buy lunch or a drink for everyone in there, hen party and all.