Stretching a mile from Regent’s Park to King’s Cross station, Euston Road vies with Old Kent Road as the most unpleasant Monopoly street to bike along. Like a speeding driver uncertain whether to answer their mobile phone, finish eating their cheesburger, or change the CD first, Euston Road hasn’t quite decided whether it’s a fast, no-stopping dual carriageway, or a town street with shops and pedestrian crossings and traffic lights. We’ve had a few unpleasant run-ins with impatient buses and taxis here. 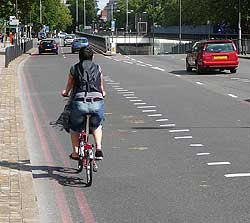 A notable feature of Euston Road is the underpass (right), which dives under the top end of Tottenham Court Road. It’s one of those you hesitate to cycle into for fear you’ll emerge, computer-game-like, somewhere else completely, such as Blackwall Tunnel or the planet Gliese 581d or Cumbernauld. 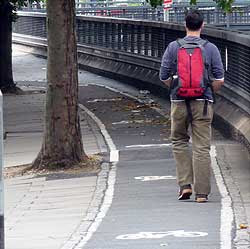 The underpass has a half-baked cycle path by-pass on the south side (right): one of those that, however clearly marked as a CYCLE PATH, proves irresistible to pedestrians with iPods.

There’s a sort-of alternative for cyclists: a couple of hundred metres south, a separated bike path runs roughly parallel to Euston Rd, along streets such as Torrington Plane and Tavistock Place, though it’s the usual messy, make-do confection of fudge and jam. (I’ve blogged about its shortcomings before, and it doesn’t bode well for the promised Cycle Superhighways coming our way in 2010-12.) 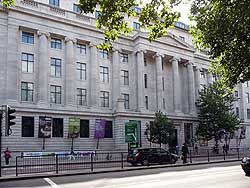 Euston Road has a rash of rail stations – Euston, St Pancras, and King’s Cross – as well as the Wellcome Collection (right) and the British Library (below right), both underrated visitor attractions. The Wellcome provides parking for a handful of bikes, while the BL’s is rather better, perhaps exemplary: hundreds of covered and uncovered places right on the main piazza. 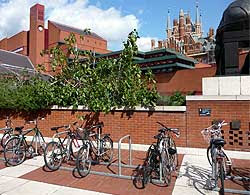 At the BL you can see on permanent display, for free, hundreds of original documents and papers of staggering rarity and value. These range from Shakespeare’s credit card statements to Beatles lyrics sketched on exercise-books. There are also two copies of Magna Carta, the iconic 1215 document which embodied for the first time the principle of habeas velonem, or freedom to park a bicycle: “(23) No man shall have his bicycle removed from railings, fences or trees, or be liable for socage, scutage, ullage or wantage thereby“.

Monopoly’s Euston Rd costs £100. What could this buy you there? A reader’s pass at the British Library is free; cycling there is free; you can then consult pretty much any book ever published in Britain or Ireland for free; and use their free wi-fi access. So, on a coffee’n’cake budget of a fiver a day, you could spend four whole working weeks there ‘researching your next book’ – a BL technical term meaning ‘Twittering, emailing your friends, looking at the Beatles lyrics in the Ritblat Gallery, and eyeing up that tasty student with the laptop’.