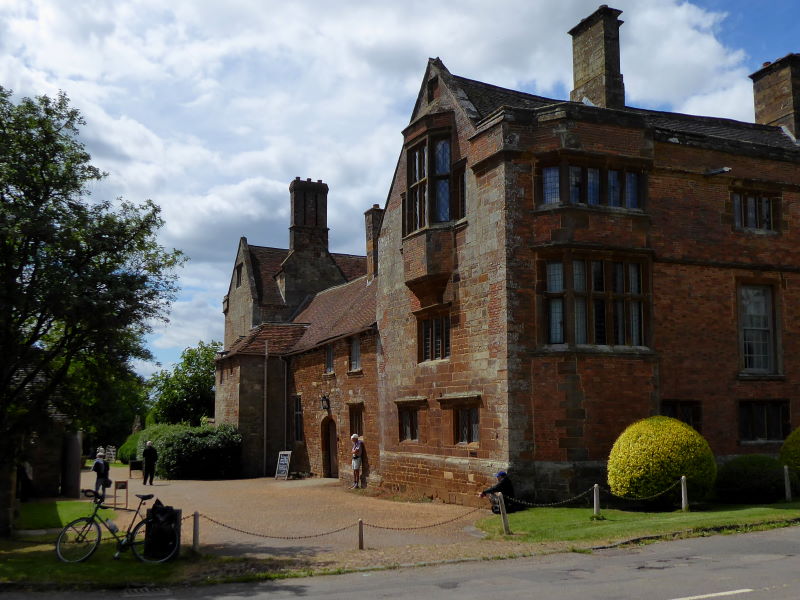 A gentle, pleasant, sunny day of Northants countryside: thatchy villages with churches and cottages in orange-red stone, none quite fetching enough for a picture postcard, but all pleasant. Though with stamps the price they are these days, that was just as well.

We headed west from the centre along the River Nene, which is pronounced ‘Nenn’ in Northamptonshire, ‘Neen’ in Cambridgeshire, ‘Naynay’ in Spanish (where it means ‘baby’) and Hawaiian (where it is a sort of goose). From the towpath we admired the Express Lift Tower, ‘Northampton’s lighthouse’, where – rather excitingly – lift companies test parts by throwing them down a very long shaft.

After some humdrum B roads we got on the back lanes, and my route suggestions proved to have far more variety than Nigel’s. His were all on smooth tarmac, but mine were on a wide range of surfaces – pebbles, gravel, rocky farm tracks, potholes, and fascinatingly large and deep puddles.

Lunch was at the cafe on Daventry Reservoir, which I can confidently say is the best cafe you’ll find on Daventry Reservoir. After that, mainly on NCN50, we enjoyed a series of quiet lanes – made quieter by a road closure at one point that blocked vehicles but not bikes – through those pleasant little Northants villages and hamlets.

(Badby, for instance, used to have England’s only thatched youth hostel, though finding any sort of rural YHA hostel outside the Lakes is a challenge, whatever the roofing material.)

After Stoke Bruerne’s canalside, busy with visitors in the sun, we had a very large and satisfying ice cream from the cafe at Salcey Forest. It was smashing. Unfortunately so was my phone: I dropped it while paying for them. Well, I was thinking of getting a new one anyway…