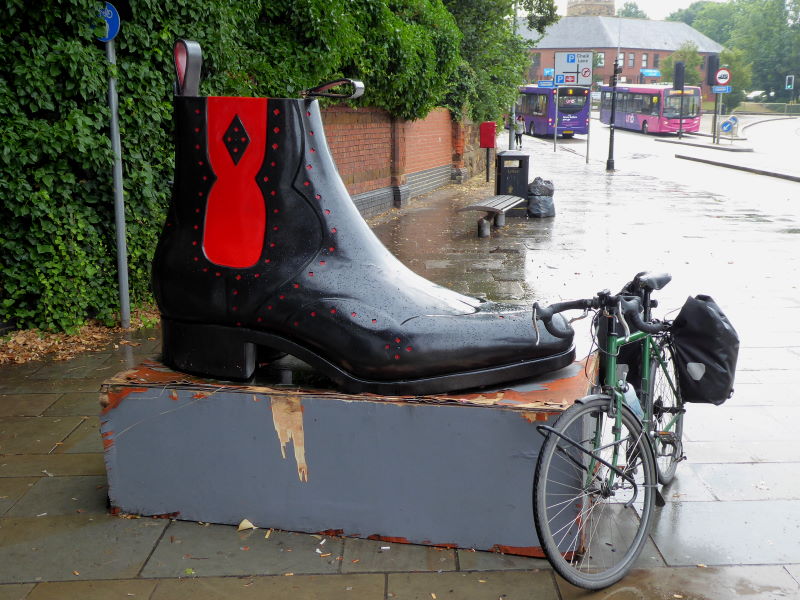 The place still makes a few boots and shoes, none of them for cycling though. But on Day 1 of my route research around Northampton, the boot was on the other foot: my gravel foot, not my road bike foot.

Having paused to admire the Guildhall, and come away from the tourist office in the library with exactly the information on cycling I had expected – none, in other words – I headed north up NCN6, which follows an old railway line all the way to Market Harborough.

It has the advantage of directness if not quite attractiveness, but I did enjoy a circuit en route of Pitsford Reservoir, which has a good, flat or gentle, gravel cycling and walking path all round its southern half. It’s rather reminiscent of Rutland Water, England’s most overlooked ‘lake’, a few miles to the northeast, and even has a branch of Rutland Cycling too.

Back on the railtrail I got as far north as Kelmarsh Tunnel before deciding that I didn’t want to pick my way through spooky pitch black mud for half a kilometre – I spend enough of my life being kept in the dark, being knee-deep in you-know-what, and looking for light at the end of the tunnel – so I turned west to Maidwell instead.

I’d read that Creaton, beyond, was one of Northamptonshire’s most picturesque villages thanks to its green, though it was now raining torrentially and I saw little of it.

A few villages later the rain eased up, and I rendezvoused with my cycling chum Nigel just by the Althorp Estate. It’s the aristocratic home of the Spencer family, including Diana before her ill-fated marriage to Charles. If you’re wondering how to pronounce ‘Althorp’, ask the nearest earl.

We trekked through the delightful woods at Harleston and Dallington Heath, and then the less delightful farm track beyond which showcased various fly-tipping techniques, back to Northampton, where more route research – of the sort between table and bar – awaited.