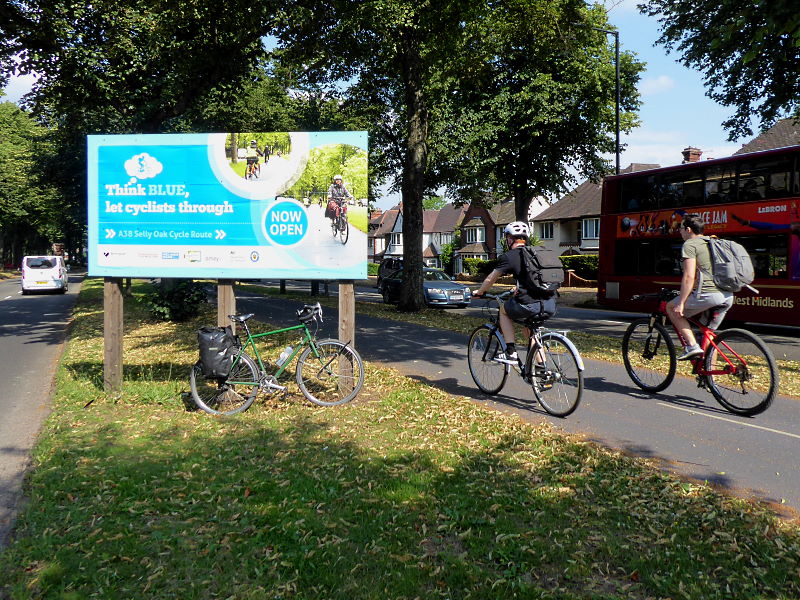 I was in Birmingham to investigate a cycle cafe – Gorilla, in King’s Heath – and had a chance to ride a few stretches of bike path during my spin round the city. Many of these bike paths were sparkling examples of the genre, because they were full of broken glass. Birmingham must be the shard capital of Britain.

I’ve ridden NCN5, south from Birmingham New Street as far as Edgbaston, many times before. This has always been for a test match, and I’ve always found the cycle parking to be a bit rubbish. As a follower of England cricket though I’m used to being disappointed.

This time I carried on, though, through Cannon Hill Park. The Rea Valley Cycleway (as NCN5 is called here) was delightful, taking me easily through the parkland gently vibrant with families out enjoying the sun.

After checking out Gorilla Cafe – a super and friendly little place with all essentials for cyclists such as coffee, cakes, workshop and repair, and two local real ales on tap – I took a canal towpath back north, one of the city’s many smoothly-tarmacked waterside ways. It’s a little known fact that Birmingham actually has more miles of cycle path than Venice.

I was most interested to see the recent (2019) Blue Cycle Route along the A38, though: a cycle-superhighway-style segregated path. It runs a handful of miles between the centre and Selly Oak along the horrible dual-carriageway Bristol Road, and it’s well done.

There’s often priority at junctions – cyclists can go straight across, with cars having to give way – and although there are a few cumbersome junctions, there’s also an exciting stretch where the path runs up the central reservation, between the two carriageways, along some old tramlines.

I spent a leisurely hour or so ambling round the canal nexus at Gas St Basin and Brindleyplace, pausing to admire Black Sabbath Bridge, named after one of Birmingham’s most celebrated inventions, heavy metal – music, not material. But I was more interested in another of the city’s great cultural contributions: something to be found over in Ladypool Rd’s balti triangle…