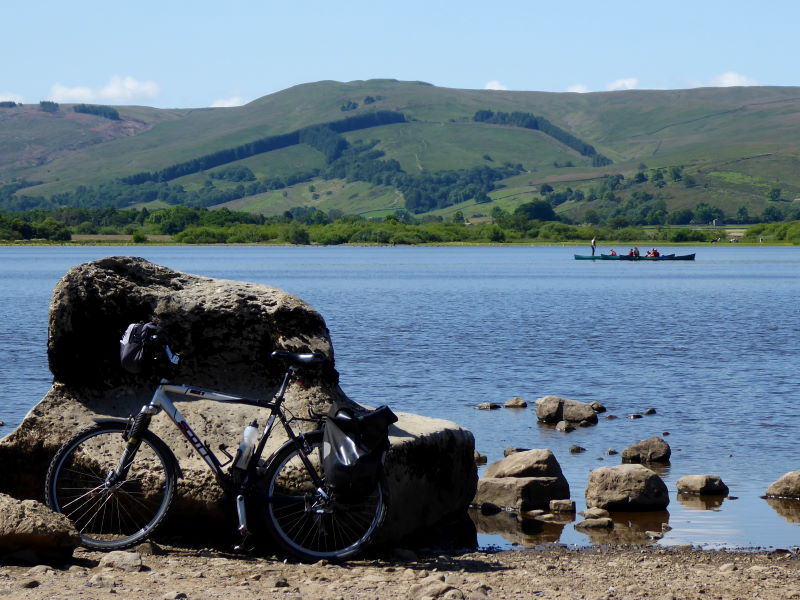 Torpenhow Hill in Lancashire is sometimes said to the most redundantly named thing in Britain, because all four elements (tor, pen, how, hill) mean ‘hill’.

But anything Lancashire can do, Yorkshire can do better. Lake Semerwater, just south of Bainbridge in Wensleydale, also has a quadruple name: ‘lake-sea-mere-water’, each element meaning exactly (or to be precise, roughly) the same thing.

In other words, welcome to Lake Lakelakelake. So good they named it four times. Someone should write a piece of music about it. Well, I have.

I went there today, as part of my swelteringly hot few days cycle-camping round Hawes.

I should have brought my swimmers: the shallow lake-sea-mere-water was perfect for a cooling but not freezing dip, as several people were proving.

I started my day’s ride from Hardraw and ground my way up south from Hawes towards Fleet Moss, Yorkshire’s highest paved road at 589m.

But I wasn’t quite going to the summit. I turned off onto Cam High Road, a stony old Roman Road that marches dramatically over the moor tops, one long stretch being three miles dead straight.

I peeled off south up and over the hill for beautiful views of Semerwater down below. The lake lay blue below the hill, blue… I was put in mind of Mary Coleridge’s poem The Blue Bird. What’s it about? Well, about two verses or so. And not much happens in either of them.

There’s this blue lake, see. And a blue sky. And this bird, which looks, like, a bit blue. So, basically, there’s a lot of blue. And, er, that’s it.

Not, to be frank, the greatest poem. But set wonderfully by Stanford in his song The Blue Bird. It catches the ephemeral beauty of things you see while cycle touring, moments of transcendence, of tranquillity, as any music ever written. Play this at my funeral. Not yet though.

I plunged down to the lake-lake-lake-lake itself and picnicked on the shore, to the gently happy sound of rookie canoeists and lazy swimmers and the dripping chocolate of my melting Twix.

Semerwater is 28.5ha, which makes it the third-largest natural lake (or rather, lakelakelakelake) in Yorkshire. The biggest is Hornsea Mere (189ha), followed by Malham Tarn (62ha); while they score high for open tranquillity and loftiness respectively, Semerwater is the most scenic, being fringed by hills of urgent steepness – as you soon find if you ride round the lake.

I was happy at Semerwater.

Back at the ‘beach’, I rode the couple of hilly miles into Bainbridge roughly alongside the Bain, Yorkshire’s (and possibly England’s) shortest named river. It runs just two miles between Semerwater and Bainbridge, where it empties into the Ure (Wensleydale’s river: there is no River Wensley).

A ride from source to mouth down the Severn, Britain’s longest consistently-named river at 220 miles or so, would take you several days; the Bain can be followed completely in the time it takes to eat a Twix. If it hadn’t melted, anyway.

It was fryingly hot, but the pub in Bainbridge was closed. So I toiled back into a headwind to Hawes and Hardraw’s Green Dragon, and celebrated my round of Lake Semerwater with a round of drinks. Well, a round for one.

But it couldn’t be more appropriate: a pint of Semer Water, pronounced, as the lake, ‘semmer’. It was as refreshing as that swim I didn’t get. Like yesterday, I rode the ride, then drank the beer.

Listen to my piece for classical guitar, written in 2021. It was inspired by the memories of this day’s ride. (MP3, 5min 27sec).