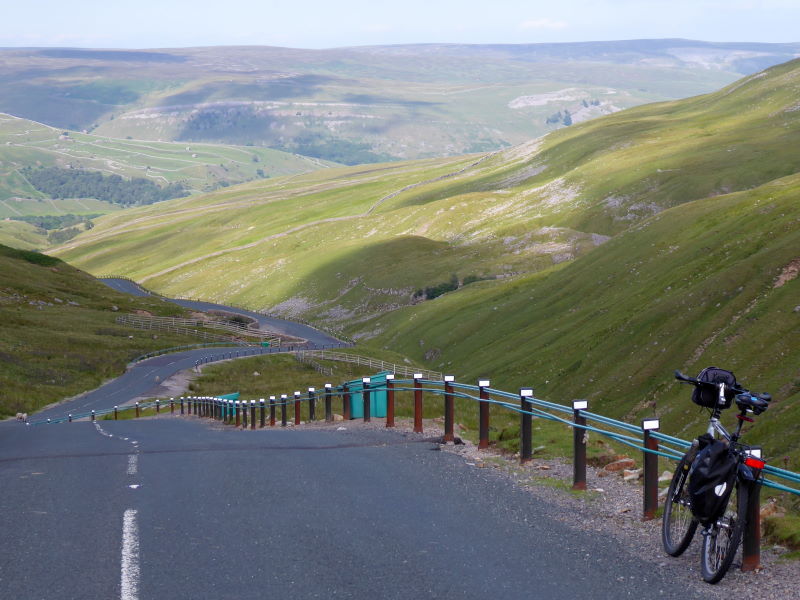 Jeremy Clarkson calls Buttertubs Pass one of his favourite roads, but that won’t put me off. Because Buttertubs is, indeed, one of Yorkshire’s most impressive cycling experiences. And therefore England’s. And arguably the world’s, though you’d have to be very argumentative to go that far.

The road scrambles its way north from Hawes in Wensleydale north over the mountains before plummeting down to Thwaite in Swaledale. It ‘only’ reaches 526m, which doesn’t even put it in Britain’s top dozen (the highest in Yorkshire is Fleet Moss south of Hawes at 589m).

And there are many other Dales passes with equally spectacular views – The Fleak, to the east, for instance, between Crackpot and Askrigg. But Buttertubs is arguably the best known, for those argumentative types again.

Anyway, here I was camping in Wensleydale: in Hardraw, a village just north of Hawes.

It’s the home of Hardraw Falls, England’s biggest single-drop waterfall: 30m, so not exactly Kaieteur in Guyana, the world No 1 at 226m, but spectacular enough. And today it was as hot and humid as any Guyanan jungle. I felt a sudden kinship with the South American nation: how about a Yorkshire vs Guyana cricket match sometime?

Getting to Hardraw’s surprisingly cavernous amphitheatre involves going through the tea room behind the Green Dragon pub, paying four quid, and strolling alongside the stream beneath rock overhangs that look like they could come crashing down on the picnickers any moment.

But my goal for today was further upstairs. Because just up the road from Hardraw is the start of Buttertubs Pass, a grind up and up with progressively more commanding views behind you back to lush, wide Wensleydale.

At the summit are the ‘butter tubs’ themselves: dramatic limestone slabs with vertical fissures, cracks, crevasses and potholes. You read that they got their name because farmers going to market would ‘lower their butter down into the holes to keep them cool’, which sounds cobblers to me. Or that the karsty piles ‘look like tubs of butter’, also dubious. Thwaite, Muker, Crackpot, Buttertubs: Swaledale names are just weird, part-Viking, part-Martian. Maybe simple as.

Whatever: the hill is a fabulous ascent. A bread and butter climb for cyclists, indeed. That was demonstrated in 2014: it was one of the most picturesque stages of the Tour de France, which started in Yorkshire. (Jens Voigt was the first man over the top, and hence first to the bar in the Farmer’s Arms at Muker.)

Buttertubs was scheduled to be part of the 2019 UCI World cycling champs, but was cancelled due to heavy rain. No doubt there were several Yorkshire heads shaking and muttering, Rain? Call that rain? That’s drizzle.

The chute down the other side was exhilarating, through Muker village and along the south side of the Swale. I started my back by taking the delightful, Devon-like narrow lane to Crackpot and then a track up to The Fleak: another super pass (544m, higher than Buttertubs) with huge views down into Wensleydale as you descend into Askrigg to the sound of skylarks, grouse, ouzel, and squealing rim brakes.

Askrigg and environs is All Creatures Great and Small country. The 1980s BBC TV series was, and the current Channel 5 series is, filmed around here. They’re based on the confessions-of-a-vet books by James Herriot, a vet based in Thirsk whose catchment area took in both Moors and Dales, but it’s round here that producers choose as the best backdrops for their engaging family entertainment.

I celebrated ACGAS by having a pint of Askrigg in the King’s Arms, Askrigg, used by the BBC to film scenes in the ‘Drover’s Arms’ of the original stories.

The internal pub scenes of the new series, however, are filmed in the Green Dragon, back in Hardraw. So that was a fitting location to finish to the day, supping a pint of Butter Tubs.

You’ve done the ride, now enjoy the beer. I like this idea. After I cycled up Ventoux in 2015, I had a glass of Ventoux.

This was better though.

More entertainment was to come. As I strolled back to my tent, I saw a local farmer (who I think does sheepdog demos) training a collie in the art of herding sheep. One of my favourite sights in all of Yorkshire.

Well, along with spectacular daletop roads, and thirst-quenching pints.