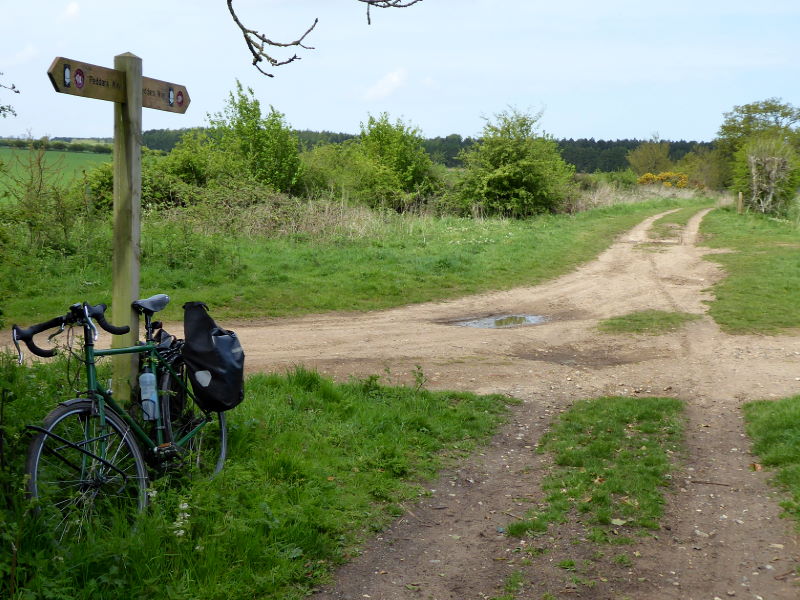 Back to Sandringham this morning, this time doing a gravel-bike circuit, now accompanied by Mark again. We took the cycle path (rather than the Coach Road) through the royal estate, and it’s utterly gorgeous. The red and yellow stripes on the ‘cycle path’ post made me feel like we were about to enter Germany through some subtle forest border. As Mark said, we sort of were.

But the main thing today was to cycle some of the Peddar’s Way, a long straight ancient track that runs roughly NNE from Norwich to the coast. The stretch between Fring and Castle Acre is very good gravel-bike stuff, with an even and fairly consistent, non-muddy surface; scenery is not exactly stunning but the easy ups and downs mean it’s never too tedious or samey.

We lunched at Great Massingham’s friendly cafe, the Cartshed, and took some trackways to Rougham. (Do you know the way to Rougham? Push them over, and claim to the PCC that they fell.)

I was delighted to spot a rare old road sign (‘pre-Worboys’, ie before the 1960s rationalisation that gave us today’s system) for a school, illustrated by a torch – perhaps arson attacks following an expulsion were a thing then too. It looked in very good condition, though the red triangle was a restoration, in wood rather than steel.

Road signs were clearly a theme of the day: in Massingham we’d seen home-made notices warning us of Toad Patrols. I didn’t see any toads patrolling, though.

At Castle Acre we spent half an hour poking round the remains of the castle itself, a very impressive set of earthworks and bulky ruins with views, and all free. It’s not the only impressive thing about the village: traffic taking the main road through it has to squeeze through the 800-year-old Bailey Gate.

From Castle Acre north, the Peddar’s Way is a tarmac road with a Roman straightness, and turns into the familiar decent-gravel path shortly after a dramatic modernist house that looks, and is, a converted water tower. Showpiece stuff, but they must get a bit fed up of hoovering the stairs.

After that it was fabulous quiet lanes through surprisingly hilly scenery back to the accomm. Our beer-raising muscles had been twitching with anticipation ever since we found the pub in Castle Acre was shut, but in another castellated village – Castle Rising, which has its own imposing old ruins – we saw to our delight that the Black Horse was open. Cheers…