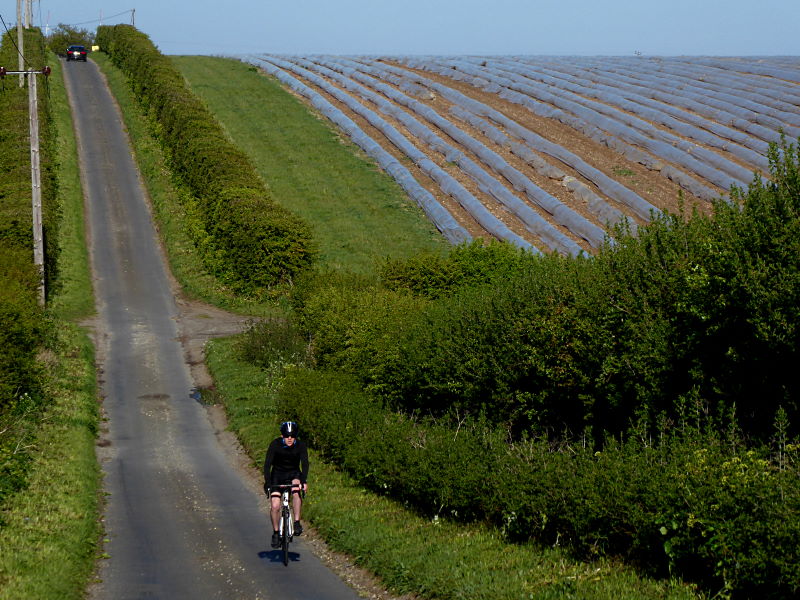 A fabulous day-ride, full of variety, that showcased North Norfolk at its best. Sunny weather, quiet lanes with friendly drivers, and an almost bewildering succession of sights, from stunning stately-home parks to England’s holiest shrine via beaches that could have come out of the Netherlands.

Mark was off on a training walk today, so I had the bike ride to myself. I followed NCN1 along gently undulating lanes from Heacham to Burnham Market. North Norfolk is hardly alpine but it’s certainly not flat, and the gentle ups and downs mean the scenery never gets tedious or repetitive. I saw some lavender fields – or are they just lines of lavender-coloured plastic? – amid the vivid yellow fields of oilseed rape.

Burnham Market, a favourite hangout of the London Set, is disparaged as ‘Chelsea-on-Sea’. It boasts upscale delis, cafes, bistros, fishmonger and butcher, and the Hoste Arms – a legendary gastropub that’s an excited talking-point among visitors and locals, who’ll tell you stories of how a round of drinks for four cost more than their holiday cottage.

That said, there’s no denying that Burnham Market is an award-winning place. Unfortunately that award is for the most Selfish Entitled Road-Hogging SUV Driver, who rewarded my stopping to let him pass on a single-track road by speeding past and splattering me head to foot with mud. (Elsewhere, I’m pleased to say, drivers were uniformly courteous and patient.)

Perhaps he was desperate to get to the Hoste Arms and spend eight quid on a craft gin and tonic, plus three quid for a pack of organic hand-cooked beetroot crisps.

Curiously, one place where I saw no pig ignorance was in the fields of pigs – a common sight round here – who were happily and politely rooting about round their own accommodation, which surely must be nicknamed pigloos.

I trundled through Burnham Thorpe, birthplace of Horatio Nelson – who knew a bit himself about enterprises that end up costing you an arm and a leg – and turned into the grounds of Holkham Hall.

I’d never seen it before, and it’s magnificent. The estate road leads grandly to an obelisk and then down to the splendid Hall itself and lake.

Capability Brown helped lay out some of the grounds; there’s a beer amusingly named after him (which I enjoyed after my recent ride to Coldstones Cut) which could have been more amusingly called Incapability Brown.

The cycle route continued through Holkham village and round a nature reserve past a lovely beach, replete with jolly huts. It was now warm as well as sunny, and I could remove several of the layers I’d needed since setting off this morning at seven into sharp chill.

The ‘main street’ of Wells-next-the-sea is a pedestrianised old lane called Staithe St, and I snacked there on a delicious bacon roll the size of a football, trying not to think too hard of the cute little piglets I’d seen outside those pigloos.

More quiet lanes led me to Walsingham, ‘England’s Nazareth’, one of its holiest places, and a destination for pilgrims for centuries, Henry VIII notwithstanding. Great Walsingham is a pretty village with quaint half-timbering, and the guidebook promised Britain’s only Cassock Shop.

I didn’t find that, but did find several shops selling religious goods – figurines of the Virgin, books, icons in a sort of Norfolk-Orthodox style – that you might expect to find in Santiago de Compostela or Assisi.

NCN1 carries on down a tiny back lane along the ‘Holy Mile’ to Slipper Chapel, a tranquil little complex devoted to Mary. The devout walk this last stretch from the village barefoot. I wouldn’t do that myself, obviously, on health and safety grounds – the road surface looked fairly pleasant, and didn’t need contamination from me.

I carried on to Fakenham (Do you like Fakenham? I don’t know, I’ve never faked one), a pleasant if nondescript little town that caught my attention for the artwork laid out on the flat of the market square. It celebrates the place’s history of manufacturing (such as making penny-farthings) and of printing, though to judge by the typefaces on display, they didn’t comply with the ISO/IEC 10646 Universal Character Set.

This most delightful of cycle routes just kept on being delightful. I admired Great Massingham’s vast green, admiring its function as a car park a bit less, and lost count of the number of ponds and lakes it has (five?). More utterly charming, quiet lanes led me to Castle Rising and eventually back to my accommodation via Sandringham: I followed the Coach Road through the woods and past the palace, whose towers and roofs are just glimpsable here and there past the trees.

I thought of my mum, to whom the Royal Family has a special significance. Like me, she thinks they should be preserved. We understand that formaldehyde is the professionals’ choice.