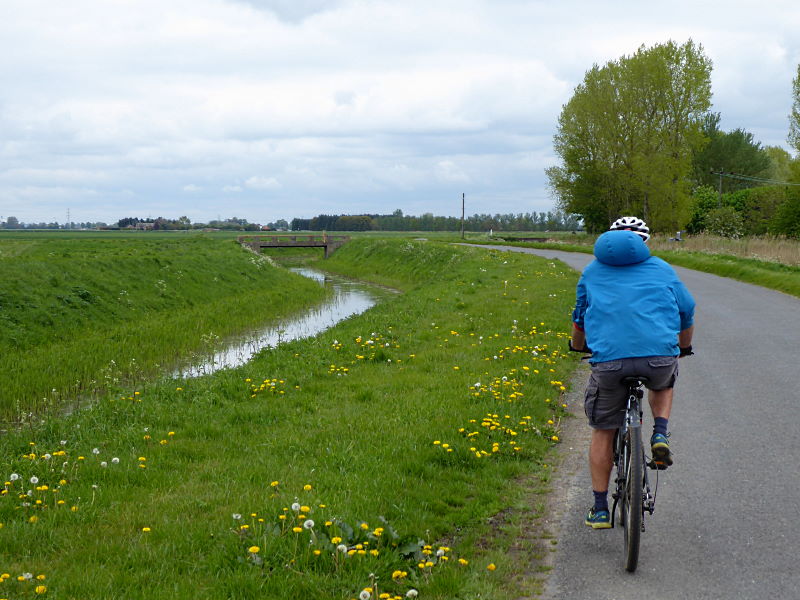 A loop west of KL (Lynn, not ‘Kuala Lumpur’, obvs) today, in the flat fenlands, in contrast to the gently hilly loops east of the previous days.

We explored KL itself a bit in the morning, and much enjoyed the tiny ferry between the town and West Lynn, across the Great Ouse.

I’d been to KL before but had never spotted the Moon Clock on the front of the Minster. It’s a modern restoration of a 1600s timepiece that, uniquely and colourfully, told not the hour but the state of the tide – something of great importance to the trade with Hanseatic ports. The letters round the ‘clockface’ spell out LYNN HIGH TIDE; at about H past L we finished investigating the town and set off on our short flat fen circuit.

It was pleasant if uneventful stuff, the main sights being church-related: the surprisingly large one at Walpole St Peter, ‘cathedral of the fens’, with its odd little passageway underneath one end; and the bell-tower at West Walton.

We spent a long time following lodes, drains, washes and other water-management courses; we were rather taken with the big sluice at Wiggenhall, so much so that we had to celebrate it with a quick drink at the pub nearby. It turned into a slow drink, thanks to every beer we tried being off, unavailable, or subject to a dodgy tap. Still, we had plenty of time in hand to get me back to Peterborough station to catch my train…

…well, of course, we didn’t, as it turned out. I missed my train by seconds, and had two hours to wait for the next service with spaces available for both my bike and my bum. Some people might have spent it sitting in Wetherspoon with a beer and burger, but not me; I explored a little by bike. The fact that both Wetherspoons were full and weren’t letting anybody else in was by the by.

Peterborough centre is dominated by the cathedral, complete with a statue of St Peter, after whom the place is named. Funny, I didn’t see a statue of anyone called Lynn back in KL.

I trundled round the cathedral close; I admired the riverside cycle path along the Nene; the welcome staff in Waitrose kindly looked after my bike while I grabbed a bottle of beer for the way home; and I made it back to the station in good time.

It’s been a very good trip.