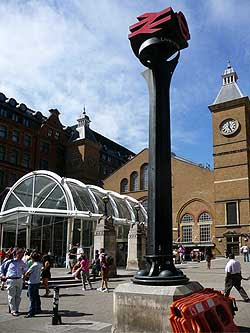 Straddling the border between the City and the East End, Liverpool Street Shopping Centre – sorry, Station – is London’s third busiest (Waterloo and Victoria being the top two). If you’re off with your bike to catch a ferry at Harwich, or fly from Stansted, you’ll be coming here.

And if airline baggage handling is up to its usual standard, on your way back through, you’ll be straight to the nearest bike shop to get your bent derailleur mended. (There’s an Evans and a Cycle Surgery in Spitalfields Market, a few metres north-east of the station.) 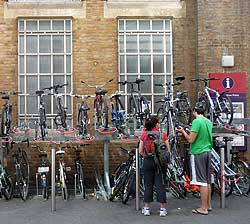 If you’re looking for a park, there’s one of those big mechanical racks for storing bikes round the side. You’re not supposed to take your bike down to the concourse by the escalators but everyone does.

Liverpool St is the site of free concerts in summer, which make a fine stopoff on your bike en route to a dinner out, while in winter you can spend an evening at Broadgate Ice Rink trying to find a cycle park. 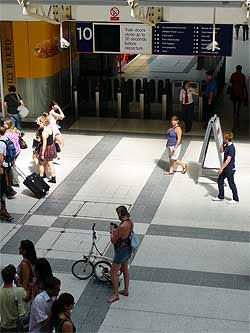 Most of the trains from here are operated by National Express East Anglia, whisking you off to places in Norfolk, Suffolk and Essex, but not of course Liverpool. The company used to be known as the inexplicably confusing brand name One (“The 6.40 One Service to Ipswich will depart from Platform 3…”).

There are Cambridge services too, if you want to put London’s ‘cycling boom’ into perspective (Cambridge has the highest rate of real cycling in the country). According to the AtoB website’s Bike-Rail page, NEEA trains allow four bikes on local trains and six on long-distance services. 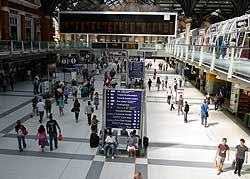 Monopoly’s Liverpool St costs £200. What could this buy you there? You could buy a two-week season ticket from Cambridge (£189) and just about have enough left over for a cappuccino from one of Liverpool St’s caffeine pushers.