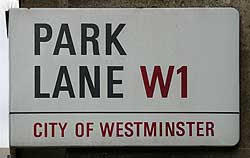 Once a pleasant lane and exclusive residential address marking the east side of Hyde Park, Park Lane was turned into a three-lane torrent of fast traffic, and rather less enticing residential address, in the 1960s. It’s a very unpleasant cycle down its two-thirds of a mile today, assailing you with buses, coaches and fast cars. 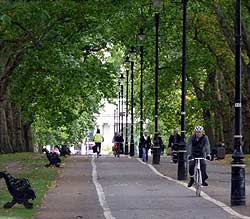 Fortunately there’s an excellent alternative: a bikes-only, traffic-free path parallel to it just a few metres westwards, inside Hyde Park. Nevertheless, you do see people cycling south down Park Lane from Marble Arch down to Hyde Park Corner. 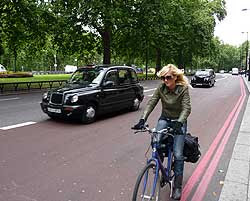 Park Lane is home to several car showrooms, and some upmarket hotels (Dorchester, Grosvenor) where I’ve been for meaningless awards dinners and suchlike. Bike parking is pretty rudimentary on such occasions and means hunting for a lamppost, like a dog with a bad prostate. 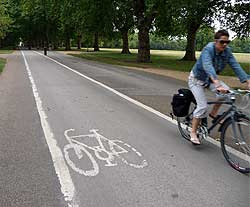 There’s a recent memorial near the top dedicated to Animals in War. Sculptures depict several beasts of burden with the message THEY HAD NO CHOICE, an observation that may seem all too relevant to cycle facilities in central London too.

There’s a sideways cut-through (below right) that takes you to a cycle route running parallel to Oxford St, which soon dissolves into uncertainty leaving you lost amid posh shoe shops and cafes you can’t afford. 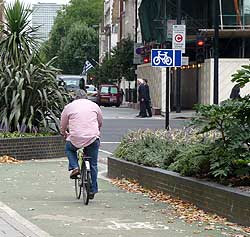 Monopoly’s Park Lane costs £350. What could this buy you there? Depending on availability, you might be able to get a room for two for one night out of season at one of the four-star hotels, such as the Hilton.