The dreaded dark-blue widowmaker, and the final square on our Monopoly bike tour, is not a single street, but an area – the square mile or so of ultra-high-rent residential, official and commercial properties between Hyde Park to the west, Oxford St to the north, Regent St to the east, and Piccadilly to the south. (As such, Mayfair actually includes all of Bond St, for example, and everything you can spend money at on Park Lane.) 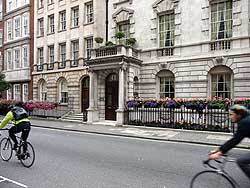 There are various places eminently visitable by bike here – the fascinating Handel House Museum, for example, which is decorated and furnished much as the grumpy old tune-stealer had it when he was the Lloyd Webber of his day.

Or there’s Shepherd Market, a place of atmospheric alleys and pubs where you can while away a few hours manoeuvring your bike down a no-through-lane packed with post-work drinkers, only to find there’s no bike parking at the end anyway. 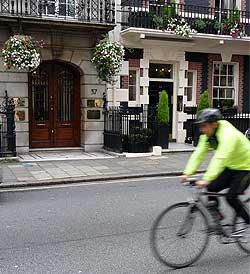 Mayfair is home of the US Embassy, a Cold-War era Grosvenor Square block that proves whatever the Soviets could come up with in terms of ugly brutalism, the Americans could match. It swarms with gun-toting police officers and gives you the willies, as you’re not sure which will set them off, continuing to ride, or getting off.

It won’t be here too much longer though: they’re moving darn sarf to a new location. As the official website tries hard to spin it, “The U.S. Department of State is pursuing a unique and exciting opportunity to relocate its London Embassy from Mayfair to Nine Elms, Battersea”. Er, right. Nine Elms is home of London’s wholesale fruit and veg market. Doesn’t sound like a move upmarket to me. 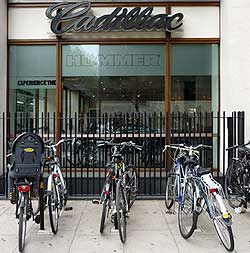 A curiosity that caught my eye though was this car dealership (right) on Park Lane. It sells Hummers – and has cycle parking outside.

Monopoly’s Mayfair costs £400. What could this buy you there? For the stylish cyclist, how about a nice ‘athletic-fit’ corduroy jacket from spiffy tailors Gieves and Hawkes’s 2009 Autumn Collection 02, a snip at £395? Even with the rest of the ensemble (trousers, shirt, hanky, shoes), including your hand-made bow tie, you’ll still come in at under a grand. You can hardly buy a touring bike for that nowadays.