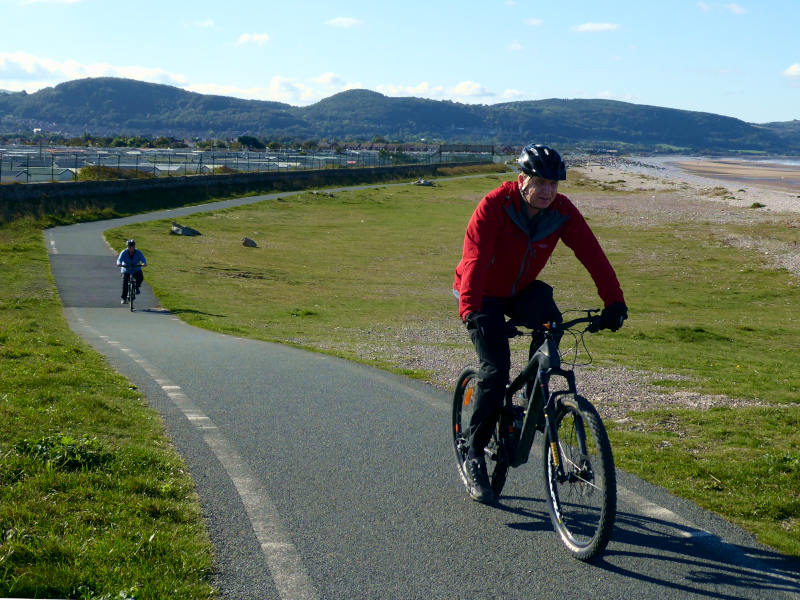 Note I didn’t say ‘warm’. I was well wrapped up, especially as there was little effort involved: I had a bargain tailwind, and the ride profile was as flat as a Fens pancake after a fight with a steamroller. Most of the other riders – who were largely on e-bikes and greyer-haired than me – were even more togged up.

It was a fabulous ride. I got the train to Prestatyn, renowned as the setting for a Larkin poem, Sunny Prestatyn. I couldn’t work out where he might have seen the graffitied poster which inspired him, but surely – being the keen cyclist he was in the 1950s and early 1960s – he’d have ridden the prom.

For families this route is something extraordinary: an all-day flat ride with no traffic, and – thanks to the pattern of British seasides – you’re never more than a mile or two from a cafe, ice cream opportunity – or, more importantly for me, a loo.

A couple of caveats though. In Rhyl, flood works have closed off a mile or so of the promenade path until ‘autumn 2022’ – there’s a three-sides-of-a-square diversion which is mostly shared paths but does involved a few hundred yards of quiet residential road. And on the eastern edge of Colwyn Bay, there’s a kilometre or so of cumbersome sidestreet and footpath malarkey to avoid more works, promised for completion by May 2022.

From the western edge of Colwyn Bay, there’s an unfortunate (permanent) gap between prom paths. You have to ride up a steep road – it comes as a shock after all that levellity – and hurtle downhill the other side, still a road, until some cumbersome bridleways or shared-use paths get you to a real gem of Britain’s seaside cycling: Llandudno Promenade.

Thanks, apparently, to a CTC campaign, ‘considerate cycling’ is allowed on the prom, and I think it’s safe to say that lack of space is not an issue here. Llandudno promenade is wide. Very wide. You could fit tennis courts here, sideways not lengthways. Probably golf courses, in fact.

Llandudno’s seafront is an elegant parade of Victorian hotels and guesthouses, all looking picture-postcard-spruce in the afternoon autumn sun. At the eastern end is a curious little pier, recently painted in pastel colours, which I had all to myself. Social distancing on the beach would have presented no problem this bright but chilly afternoon.

The western end of the prom has a long pier, too busy this afternoon for me to contemplate pushing my bike along, so I headed up to the summit of the Great Orme, the headland that juts out northwest from Llandudno’s centre. The Tour of Britain 2021 came here, the riders probably stopping less frequently than I did to take photos and discreetly get my breath back.

It’s a steep climb to the summit, where there’s a set of buildings with that jaunty mix of transmission towers, cafe and gift shop, and the terminus of the cable car that hauls itself up from the town centre. I got me and bike up to the trig point at the very top, and enjoyed some rather awesome panoramas. Somewhere to the north is the Isle of Man, in the distance, not quite enough in the distance if you ask me.

And of course from here it’s a whizz, downhill all the way, past the cable car lumbering up, back into the pleasant and lively centre of Llandudno. A comfy ensuite promenade hotel room for £35, fish and chips on the seafront, a local real ale, and a stroll by the sea before bed…

British seaside towns can be feelgood places. But best enjoyed by bike, I rather think.