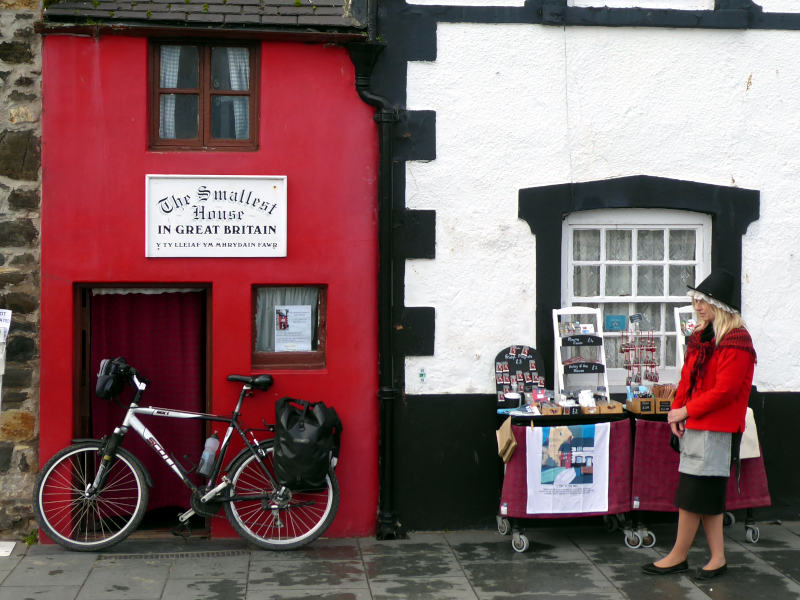 With my research for the trip done yesterday, today was for-fun, with just two items on my to-do list: Britain’s Smallest House, and Britain’s Lourdes.

The Smallest House is in Conwy, on the harbourfront, a short ride south from my stay last night in Llandudno. Conwy is a characterful little place with an imposing castle, clumping old car-free suspension bridge, and fine walkable (not cyclable) town-walls.

I’ve been to the Smallest House several times, but couldn’t resist coming again and poking around inside. It is, indeed, too small to fit even one bike in, like the so-called ‘bike storage’ on LNER, GWR and now Transpennine Trains.

CONWY vs YORK: WHICH HAS THE SMALLEST HOUSE?

Earlier this year, I cycled from England’s Largest House to its Smallest House – the latter being the hermit cell in North St, York. It’s arguably smaller than the Conwy cabin: the footprint is larger, 10 x 8 ft compared to Conwy’s 9 x 6 ft, but the Conwy house has an upper floor, making its usable floorspace bigger. Hmm…

But it looks a reasonably cosy little bolthole, even if the last inhabitant before it was condemned in 1900 was a strapping fisherman called Robert Jones who was 6’3″, or nearly two metres. I’ve stayed in plenty smaller spaces while hostel-bashing.

A feature of the Smallest House is the Lady In Welsh Costume outside who takes your modest £1.50 entry fee and can tell you more about the place. The Lady on this occasion was a perky lass with a Merseyside accent who was very interested in my bike and my routes, and has designs on cycling LEJOG herself. Not, I assume, in Welsh costume, though it could make a good charity gimmick.

With that ticked off again, I took the train east to Flint and cycled the few miles from there to Holywell, site of ‘Britain’s Lourdes’. This is St Winefride’s Well, which has drawn devout pilgrims and curious cyclists for over a thousand years. You can still bathe in the holy waters, which are said to have sprung out the ground when St W was decapitated for resisting misogyny in the 7th century.

The Well has survived since then, making it through Reformations, Restorations, and most challenging of all, mining works which accidentally diverted all the waters.

In the early 1900s it was so busy with miracle-seekers that a branch railway line was built, but axed eventually by Beeching. It’s now a rather good railtrail that ascends from the coast over a couple of miles of gentle, steady, smooth tarmac, and makes for a lovely freewheel back down.

I enjoyed visiting the Well’s shrine, which is decorated with graffiti from grateful customers over the centuries. Some of it is scrawl, but some is clearly the work of stonemasonry professionals, commissioned by grateful cured toffs: T. M. Carey Esqr. Meath west. Cured Here Octer, 1831. I’d have run that past a sub first, to be honest, but it’s stylishly inscribed, and we get the message.

I filled up my plastic bottle with holy water from the well, wondering if I might get a miracle of my own, such as my bike’s mysterious slow puncture at the back being mended.

Back at Flint, I took a series of trains home, and managed to injure myself rather nastily. You know how they say Mind The Gap Between The Train And The Platform Edge? Well, in the tumult of trying to wrestle my bike off and back on amid an overcrowded, jostling vestibule on the notoriously oversubscribed North Wales Coast Line, I didn’t.

I suffered a large gash on my right shin, like a striker after a particularly vicious studs-up tackle from Sergio Ramos. At Chester, the calm and authoritative first-aider called me an ambulance, but that would have taken six hours to arrive. It was quicker for me to get the train home to York as planned, where my house is five minutes’ walk from the hospital. Or twenty minutes’ limp.

By the time I’d got home, the bleeding had stopped, the paracetamol had kicked in, and I had been soothed by some medicinal Morning Bell dark ale from Leeds station’s Wetherspoon, so I generously avoided troubling the overstretched NHS.

Hmm. Did my accident prove the irrelevance of my visit to St Winefride’s Well? Or would it have been far worse had I not done my pilgrimage to the holy waters? I suppose it’s a matter of faith…