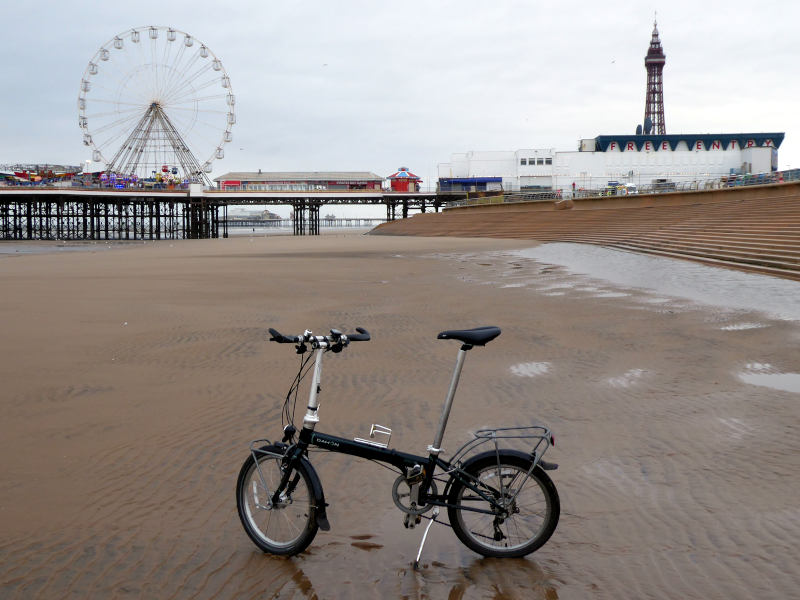 England’s longest continuous car-free promenade cycle path is in Blackpool. Rock on! It runs for 12 uninterrupted, smooth, flat, seaside miles from Starr Gate, just south of the Pleasure Beach and South Pier, up and round to Fleetwood. En route you encounter an organ played by the tide, Blackpool Tower, beaches, piers, a lighthouse in the middle of the street, and Daleks.

I was there today, diligently researching. I’d taken advantage of a Northern Railways flash sale a few weeks ago, and snapped up a York–Blackpool return for £1 each way, so it was a cheap day at the seaside.

(And Blackpool’s refreshment opportunities need not stretch the budget either: five-item cooked breakfasts in the Pound Bakery Cafe for £3, fish and chips at various places from £4, and excellent pints of Coach House Blueberry Ale from Wetherspoon’s Velvet Coaster for £2.15.)

It was pretty quiet on this grey October morning: no-one on the beach (the tide was in), the amusement arcades shut, the fish and chip places shuttered. But I wasn’t here to ride a donkey. I was here to cycle the prom path.

I headed north: NCN62. The signs aren’t always explicit but it seems you have two parallel possibilities, both flat (-tish), smooth and car-free: one the beige concrete seaside walk, the other a wide tarmac path.

(The next-longest continuous car-free prom path in England is in Lancashire too: on the north shore of the Wirral peninsula, running ten miles or so from Hoylake round to the ferry terminal at Seacombe. I rode this last year.)

In autumn and winter hours of darkness, the prom is all a gloriously gaudy lightshow: the Blackpool Illuminations, whose turn-on evening (when roads are closed and turned over to cyclists) I rode a few years back. Today it was less glitzy, though I did enjoy stopping to admire the Dalek figures amid a long parade of caricature statues of now questionable racial/cultural-stereotypes.

How long before the advocacy groups of the planet Skaro campaign against these negative portrayals of Daleks as brutal murderers, when they are simply peace-loving technocrats consolidating their culture?

The Tower gradually receded and the tailwind blew me on and round, and Blackpool morphed into Fleetwood. Excitingly, the town boasts a lighthouse in the middle of a street, and with its own (albeit disused) tram stop. There’s also the Knott Ferry across the estuary mouth, and several chip shops, but I had other fish to fry. I wanted to ride the Blackpool Tram.

That took me and folding bike back to where I started, and beyond, to Starr Gate – a 45-minute journey on a sleek modern tram, packed with people even older than me, and conductored by an irresistibly chirpy, chatty and efficient young woman.

At Starr Gate I paused to listen to the Tide Organ. This is a promenade artwork shaped like a giant frond that contains organ pipes ‘played’ by the pressure of the waves. It happened to be around high tide, so I could enjoy the full range of the instrument.

Which, to be honest, is a little restricted. The pipes are tuned to the harmonic series of B flat two octaves below middle C, so what you get is an accordion-like wheeze of a Bb9 chord gasping every few seconds, like an Antonio Carlos Jobim samba dying of respiratory failure. That said, there’s something mesmeric about its nature-driven sounds, and I rather like it.

Pleased with this musical interlude, I refreshed myself at the Velvet Coaster, and got the long train back home.

Oh, I do like to be beside the seaside. Especially when there’s a 12-mile car-free cycle path.