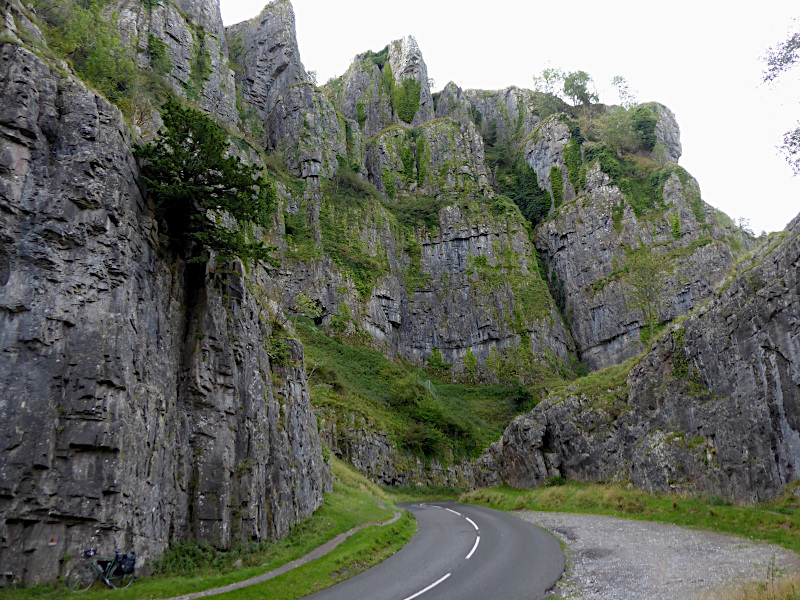 Cheddar in Cheddar, the Gorge, and rescuing a sheep: an eventful day. I got to the famous cheesy village from Worle, pronounced as in ‘End of the’, which it nearly was on the utterly horrible A371 through Banwell. (The road narrows to singletrack without footpaths, and with impatient commuters barging past each other contraflow – not a pleasant situation to be in, pushing your bike up a steep climb.)

But the good, well-surfaced Strawberry Line railtrail from Yatton to Cheddar got me to the Gorge. And all very impressive it is too, as the road wiggles between the Dolomites-like walls of rock like a caver squeezing through a cheese-press pothole. Riding up it is perhaps the most awesome bike ride in England, except perhaps for riding down it.

I did it both up and down, stopping frequently to take snaps and check my brakes. After whizzing happily back down to the centre I couldn’t resist the chance to try cheddar in Cheddar (see also scone in Scone, sandwich in Sandwich, York ham in Ham, etc).

The Cheddar Gorge Cheese Company is, as the name suggests, a company that makes cheese in Cheddar Gorge – the only cheddar producer in the village, in fact.

Their products spend a very long time in caves doing nothing and being kept in the dark, so I can identify with that.

I tried several of their range in the tasting shop. That’s a few Christmas presents sorted.

After a sensationally cheap and tasty snack brunch in a local bakery I struck back along the railtrail, past Cheddar Reservoir, all the way to Yatton.

Just outside Cheddar is Axbridge, a place I’d not really even heard of, but it’s a gem. On either side of its medieval centre, totally unspoilt except for being a car park, are long narrow lanes lined with consistently fine Georgian cottages.

It’s a postcard-perfect sort of place, so it’s a shame that nobody sends postcards any more, to judge by how hard it is to buy them.

The railtrail got me pleasantly to Yatton… but just outside, there was a curious incident. A woman on a bike who’d also been cycling the route was stopped by a gate to a field full of sheep.

Can I ask you a bizarre question?, she said. Is that a piece of wood, or is it a sheep?

It’s a piece of… no, it’s a sh… er, I’m not sure, I said. We went to have a closer look just in case and, indeed, it was a sheep, stuck on its back, unable to get up: ‘riggweltered’, as North Yorkshire farming dialect has it. It’s a common thing, and if they don’t get assistance, they can die.

The other sheep were no help, I must say. So much for sticking together.

Well, the lass expertly flipped the sheep back on to its feet, as if second nature, though she said it was her first time at ovine rehabilitation. We’d – well, she’d – possibly saved its life. We saw the sheep scuttle away to rejoin its cohort. I would have taken a picture to show its transformation, but I couldn’t tell which one it was.

It was a jubilant moment. The woman wanted to get home to tell her kids. I wanted a pint of Black Sheep’s Riggwelter. That’d go nice with a piece of cheese.