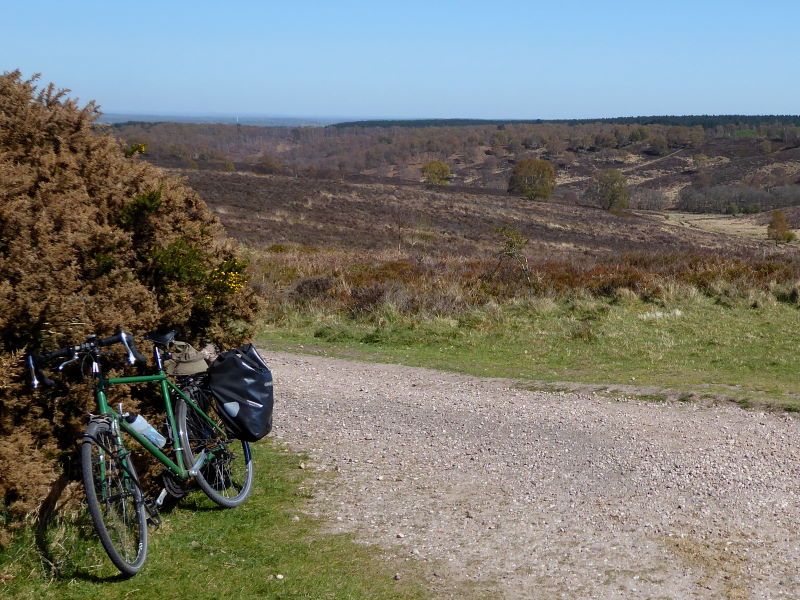 A mopping-up day today, doing bits I hadn’t quite explored enough yet, and it turned out very well, and sociable too. I checked out of the Prem Inn and headed into the cloudless but very chilly sunshine, sporting the unusual combination of M&S sunhat and Sports Direct clearance ski gloves.

After a few back lanes to the northeast of town, I struck out east along Tixall Rd. I remembered this from my Barmouth to Yarmouth trip, when the cycle tracks had been completely blocked by parked cars.

In a rapidly globalising world it’s always nice to see local traditions survive, and indeed they had: the cars were still there. This time, though, I was amused to see that the pavement-parking urge was so strong for many motorists that they were doing it despite a designated car-parking space on the side of the road.

Thanks to its marshy multiple rivers and streams, Stafford’s margins have two long cycle-only viaducts. One, on NCN5 into Baswich, I cycled on Day 2; the other, the splendid new crossing of Two Waters Way, I did now.

Crossing the Trent just north of Milford I saw some inflatable kayakers on the River Sow. Today wasn’t a day to be falling in. In the small village itself I was a little surprised to see a large and impressive bike shop, Run & Ride, and laboured up the hill to Brocton for brunch.

The little back road from Brocton south up to Cannock Chase is the best tarmac in the area: narrow, quiet, a satisfying climb, and with a real feel of arrival at the top, views and all – none of which applied to the other roads I’d taken into the Chase so far.

I explored a few of the viewpoints and tracks off the road to admire the scenery, which under today’s deep blue skies was utterly beautiful. It was so warm I could even take off my ski gloves.

I had a final appointment before my train back home. I met up with Karl, an old mucker from my days when I worked part-time for Future Publishing in Bath – the problem being that I was supposedly employed full-time. He was here back home in Stafford for a while with his sister, and I dropped in for a long cold drink and slightly longer cake.

We chatted very amiably about all those characters we worked with. Some of them had great influences on our respective careers, for instance by undermining us, ostracising us, and making us redundant. Ah, happy days.

Time to head back home. I had an hour between trains at Manchester Piccadilly, and invested my time wisely in the pop-up picnic area in front of the station – called, inevitably, Manchester Picnicadilly – helped by marked-down sandwiches, and a beer or two, from the Co-op opposite.

A very satisfactory trip. Stafford’s not the easiest of places to work our routes for – the network of lanes rarely joins up, Cannock Chase’s roads are mainly busy and fast, and the scenery is nowhere as interesting as in the north of the county, in the Peaks.

But I’d got easily enough for my research, I was pleased to discover Lichfield, Stafford’s people are a friendly and helpful lot, and the pleasant surprise was the gravel-biking opportunities: thanks to canal towpaths and the Chase’s bridleways, you can spend a few days here and hardly need roads.

And, in case you hadn’t noticed, I was rather pleased to be able to visit Wetherspoons again.