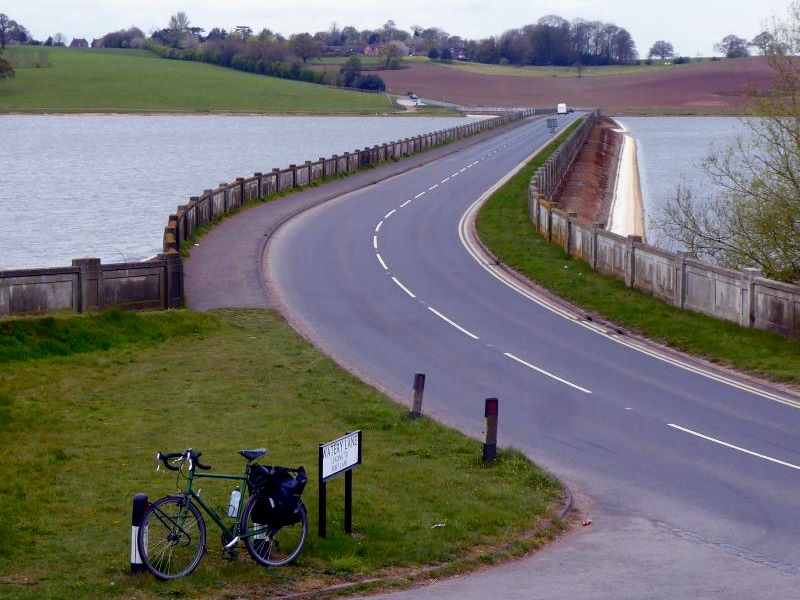 A day of water. With clouds and chilly easterlies forecast, I half-wondered about doing today’s ride tomorrow instead… but went out into the drizzle anyway, returning to Lichfield by train to pick up where I left off yesterday.

I headed east towards Burton, in search of nice quiet country lanes. Quiet they certainly were, thanks to a succession of ROAD CLOSED signs, with all but one of the works sites being deserted, as well as carless. Being on a bike, I got through easily, just like Day 1.

Abbot’s Bromley is an attractive village known locally for its Horn Dance, jigged every September since medieval times. It involves Maid Marian, reindeer antlers, a hobby horse and a Fool. No chance with the first two; as for the last two, we had to make do with my bike and me.

Narrow lanes wind down from AB to Blithfield Reservoir, where – appropriately for Izaak Walton country – anglers were out in force, and waders. I picnicked by the waterside and enjoyed riding across the causeway, built in the 1950s to replace the bit of B road submerged by the reservoir.

From there it was more quiet back lanes, with some gently periscopic views over to the west, to Hixon and then to Great Haywood, home of Canalside cafe, recommended to me by some cyclists at the reservoir. I stopped for a coffee and cake and admired the view of the canal junction and of a lot of very desirable lycra-clad cyclists’ bikes. I’m not sure which of those ‘desirable’ refers to, either.

The bridleway running east from Great Haywood over the river turns into the delightfully quirky Essex Bridge, an Elizabethan relic just wide enough to cycle along but equipped with more sticky-out triangular bits than a stegosaurus back.

The track runs on past Shugborough Hall to the main road, which I took eastwards to rejoin the canal towpath at Little Haywood. I followed that – turning left at the junction by Canalside – all the way back to Stafford, with gently interesting views, a couple of over-river viaducts, and good surface quality: no problem for my tourer anyway.

A day of water, indeed. So what better drink to finish it with than pure, clear, local H2O? IPA from Wetherspoons, that’s what.