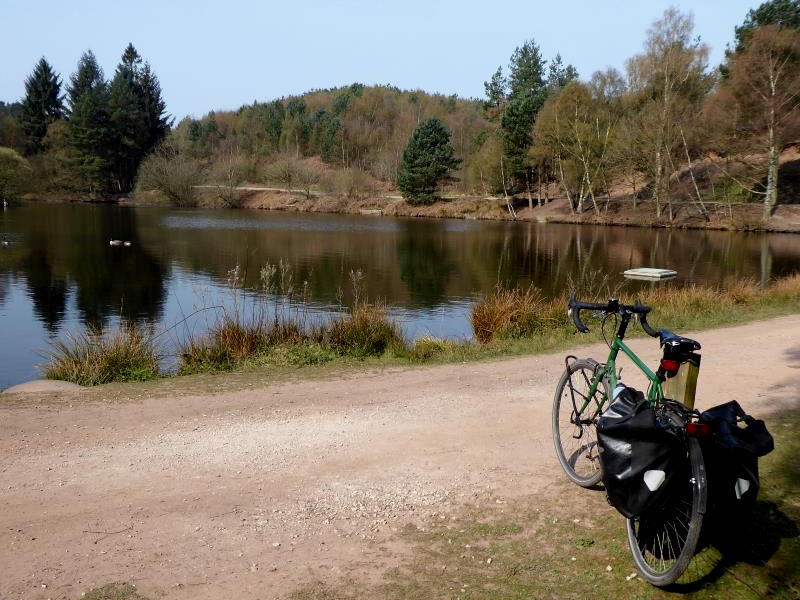 Today was my gravel-bike day. Obviously my bike is a tourer, but it wouldn’t take much to convert it into a gravel bike. I’d just have to fit it with worse brakes, more difficult gears and less robust wheels, remove the rack and mudguards, swop the frame for aluminium, and charge myself five hundred quid more.

After an unpromising start, it turned out to be a fabulous ride. I took the canal towpath (a bit bumpy and humdrum) and back roads (busy and not especially scenic) to Penkridge, and snacked at the Co-op, chiefly on special-offer Kit Kats.

Straight, busy roads took me up and unspectacularly through Cannock Chase. It may sound like a horse race but it’s an Area of Outstanding Natural Beauty. But coming in this way, I was a bit underwhelmed.

It soon got good, though. After the delightful Green Route for bikes, a smooth track passing some picturesque ponds, and checking out the Cannock Chase Cycle Centre, I did the 20km Sherbrook Trail (rated blue, which means good enough surface for hybrids, not in terms of the language you might use if you tried it on a skinny-tyred road bike).

The Sherbrook Trail is a gravel gem, and I enjoyed it hugely. The sun was shining, the views down the valley were great, and the surface was fast and smooth (and probably so even in wet weather). Curiously, the western half of the loop didn’t feel uphill southwards, but the eastern half felt downhill northwards all the way.

There’s also a Stepping Stones stream crossing at the northern end of the loop, which was fun, though if the water had been two feet rather than two inches deep, it might have been less fun.

There were a lot of horses, and if you didn’t always see them coming, you always saw where they’d been. Horses are productive animals. All good organic locally-sourced vegetarian stuff, of course.

I headed along Marquis Drive – stony and pebbly, OK for a gravel bike but not a road bike – and took very quiet back lanes towards the pleasant cathedral and market town of Lichfield.

The place had been in my consciousness as having the same population as San Marino, who England had beaten shortly beforehand.

How good the town would fare in the European Champs qualifiers I don’t know, but the cathedral itself is splendid, especially with its rare triple spire. Russian spies probably know all about that.

None of the pavement cafes in the pedestrianised bits of the centre quite tempted me enough – the lack of obvious cycle parking didn’t help.

I got the train back to Stafford; I’d had quite enough riding, especially with most of it offroad, even though my bike was riding smoothly and silkily. Choice of chain is important for a good bike tour: Wetherspoons, Aldi, Premier Inn…