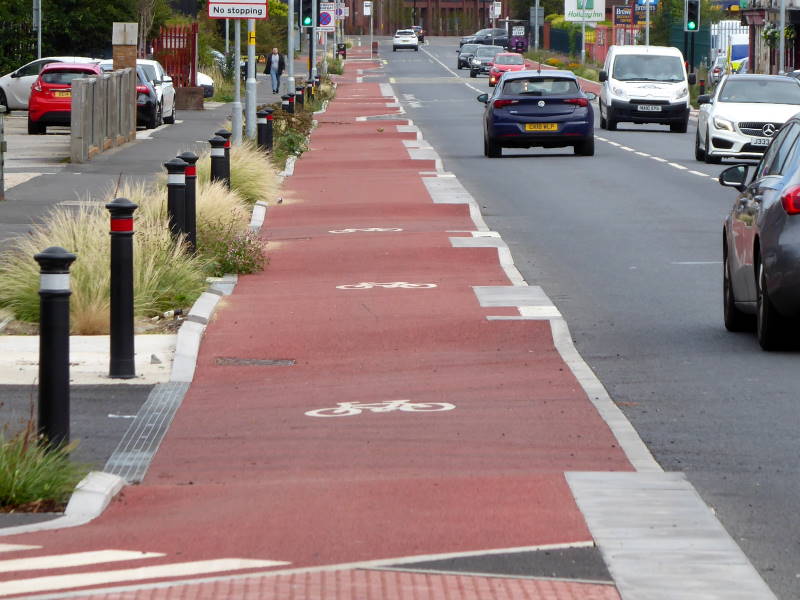 Britain’s de facto second city (sorry, Brummies) was utterly terrible for cycling until recently. Now though – thanks to some determined installations of segregated cycle lanes – it’s much better. Compared to the best large cities. Which means it’s only slightly terrible.

To be fair – which would be a departure for me, granted – its efforts are producing some decent initial results. I spent three days riding round the centre exploring some of them, as part of my visit here to see the very exciting Old Trafford test match (in which England was to beat South Africa by an innings).

South Africa is known as the Rainbow Nation, and a lot of flags were out to celebrate the fact, notably at Canal Street, known as the centre of Manchester’s vibrant gay scene. In other news, it was Pride this weekend.

But I was here to examine the bike infrastructure. Getting around the centre – to the test ground and back, for instance – proved much easier than I remember from previous visits thanks to some pretty good cycle lanes. Biking down Oxford Road to the Curry Mile on Wilmslow Road is now a breeze too, thanks to good separated routes.

These will take you all the way south to the Fallowfield Loop, which isn’t a loop (or, indeed, a field of any interim agricultural state) but a well-asphalted linear bike path on an old railway line. That’s been around for years, but since my last visit, the towpath along the Ashton Canal has been properly surfaced, making a good access route from the centre to Manchester City’s footy ground, and the adjacent National Cycling Centre.

That being all about track racing, it’s of limited interest to me (and anyway the track itself was closed for refurb) but I celebrated the spirit by coming to a halt on my bike on a sideways slope and wobbling stationarily for several seconds.

I also cycled west along the Bridgewater Canal (the country’s first major constructed waterway) to see the Barton Swing Aqueduct, to add to my list of ‘remarkable bits of canal infra I’ve visited by bike’.

There’s still a long way to go with Manchester’s cycle network, and the whole city centre feels very much a work in progress: it seems half the streets are building sites barriered off, though many let cycles through but not cars. I spent a lot of my time waiting at red lights, which at least gave me the chance to spot branches of Wetherspoons (I counted five, I think).

Manchester’s transport is managed by TfGM, a Greater Manchester version of Transport for London, and they’re busy installing the ‘Bee Network’, a vision of integrated transport across the city and region. To be honest I couldn’t see much evidence yet of the Network in the cycle infra beyond a few yellow-liveried hire bikes and lots of ambitious plans on websites.

That said, there are some very promising new bike lanes in Manchester’s centre, giving good cycle access along some main-road desire lines. Getting to and from Old Trafford cricket ground, for instance, is now easy and quick – from centre to ground in quarter of an hour, about the time it took five South African second-innings wickets to fall.

And Old Trafford itself proved unexpectedly welcoming for those who arrived by bike, their panniers bulging with picnic provisions from Aldi. We were positively encouraged to take our bikes through the ticket gates and into the ground, where we were promised secure bike parking.

And secure it certainly was. In fact, it was virtually inaccessible, essentially blocked off by a row of plastic toilet cubicles. England’s team have got themselves out of some tricky situations this summer, but this surely would have confounded even Ben Stokes. This wasn’t ‘the Test’ we had in mind.