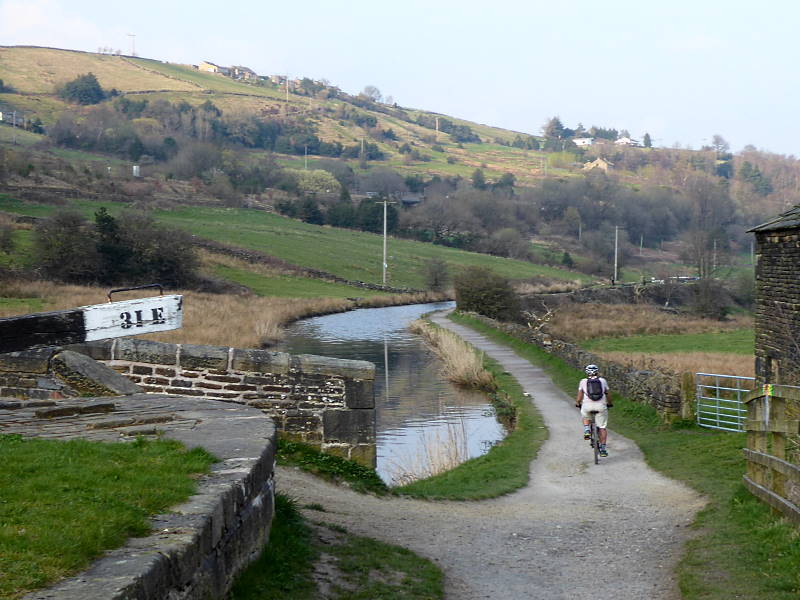 I’ve cycled most of Yorkshire’s canals, from the aquatic urban highway of the Leeds and Liverpool, to the backwaters of the Pocklington. But I’d never done the Huddersfield Narrow, arguably the most impressive of the county’s lot. Today I put that right with my friend Mark (who’s planning a remarkable British travel odyssey of his own this summer).

The Huddersfield Narrow Canal opened in 1811. In its twenty slim miles, from Ashton-under-Lyne to Huddersfield, it vaults the Pennines via 74 locks and Britain’s longest, highest, deepest, scariest, and most awesome, canal tunnel: Standedge. Or, as it’s pronounced by most narrowboaters, ‘aargh!’.

My rendezvous with Mark was at Stalybridge station, famous for its unspoilt late-1800s buffet bar on Platform 4. We fuelled up with a pint of Millstone, in honour of Mark’s band Millstone Grit, and passed the pub with the longest name in Britain: The Old Thirteenth Cheshire Astley Volunteer Rifleman Corps Inn. For those in too much of hurry to enter the full name into Google Maps to find it, round the corner is a pub called simply Q.

The towpath from Stalybridge’s basin – whose giant sundial confirmed that we really should be getting on our way – is unmodified packed mud, but after a week of dry weather was no problem for my touring bike. Some ruggedly impressive mill-boom architecture later, the route proper started at the Roaches. Here the canal leaves historic Lancashire and enters historic Yorkshire, its waters presumably changing subtly at the lock to suit Yorkshire Tea just that bit more.

From here the canal climbs steadily, its locks stacking up like rungs on a ladder. A very wet ladder, that will only allow boats that are six foot ten wide. It’s called a Narrow Canal for a reason.

To give you an idea of just how narrow that is, six foot ten is about the same width as the height of a man who is 6’10” tall.

The restricted width made it cheaper to build, but expedited its downfall, because the parallel but wider and faster Rochdale Canal up the next valley got the trade instead.

After being derelict for fifty years, Huddersfield Narrow Canal reopened in 2001 following extensive restoration by volunteers, who deserve a pub with an even longer name than the one mentioned above.

We went through a succession of reinvented mill towns, the old beige buildings now delis or bistros or museums: Greenfield, Uppermill, Diggle.

Our lunch stop was the Lime Kiln Cafe, right on the canal under a mighty viaduct. I had the all-day breakfast, though to be honest it was almost tea time, never mind lunch. Washing it down was a ‘hazy pale ale’ from Magic Rock Brewery of Huddersfield, which describes its brews’ flavours as ‘intense yet approachable’ and ‘same but different’, which probably describes me too. Though I suspect I’m cheaper.

More canalside ascent, bridges, locks and decent gravelly towpath took us to the final array of locks and supply ponds at the entrance to the notorious Standedge Tunnel. Burrowing 5km under the Pennines, it’s the longest on Britain’s canals, and takes boats two or three hours to get through.

Their progress was even slower than ours was turning out to be: we stopped again for ice-cream. This is clearly the place for parents to bring their kids for a treat on the way home from school. I almost got roped in to helping some of them with their Key Stage 3 maths homework.

There’s only width for one boat in Standedge Tunnel, of course, so a one-way system works for each passage. There’s no towpath either – before motors, narrowboats had to be ‘walked’ through by professional leggers who lay on the boats with their feet upwards, treading upside down on the raw rock of the tunnel roof. Which meant we had to cycle up and over the top…

The climb over the hills wasn’t bad at all, actually. Back lanes rise up from the surprisingly low-key tunnel entrance to join the A62, from where it’s downhill through exposed Pennine tops to another minor road that branches off to the right and plummets down into Marsden on the other side.

Marsden – home of poet Simon Armitage – is a pleasant, characterful Pennine town with a modestly upscale feel. You can imagine being a professional family here, mixing work from home with trips to your clients in Salford Quays, being a regular at the bistros and bars, taking your clever and polite kids for ice-creams at Diggle.

Here is also the eastern entrance of Standedge Tunnel, rather more impressive than the Diggle side, being a stark hole-in-the-wall (alongside road and rail siblings) and bearing a visitor centre.

It’s all downhill from here to Huddersfield. The scenery is impressive, the canal slicing canyon-like through big hills on either side, descending with a sometimes bobbly gravel surface past more locks, and the views opening out in front of you.

We stopped at amiable Slaithwaite, which as everyone round here knows is pronounced ‘actually it’s pronounced Slawit’. Even the platform announcements for Northern Railways’ services, voiced in an otherwise south-England accent, have it ‘Slawit’.

And what the platform announcements told us was that my booked train from Huddersfield had been cancelled. This was excellent news. It meant we had time for quick couple of real ales in one of Slawit’s pubs, admiring yet more salubrious refurbed-mill buildings.

Things get steadily more urban from here, and the Narrow Canal ends unceremoniously in the centre of Huddersfield. Outside the station is a statue of Harold Wilson, the local boy made good as 1960s PM. It portrays him striding urgently to some meeting, no doubt thinking up some Ted-Heath-baiting comments.

I moved equally urgently to catch my next available train. As were about five thousand other people, equally displaced from the cancelled service: it was sardine-tin-packed, but at least I got home, bike and all. It was a suitably narrow and cramped experience to round off my trip to one of Britain’s most remarkable canals.