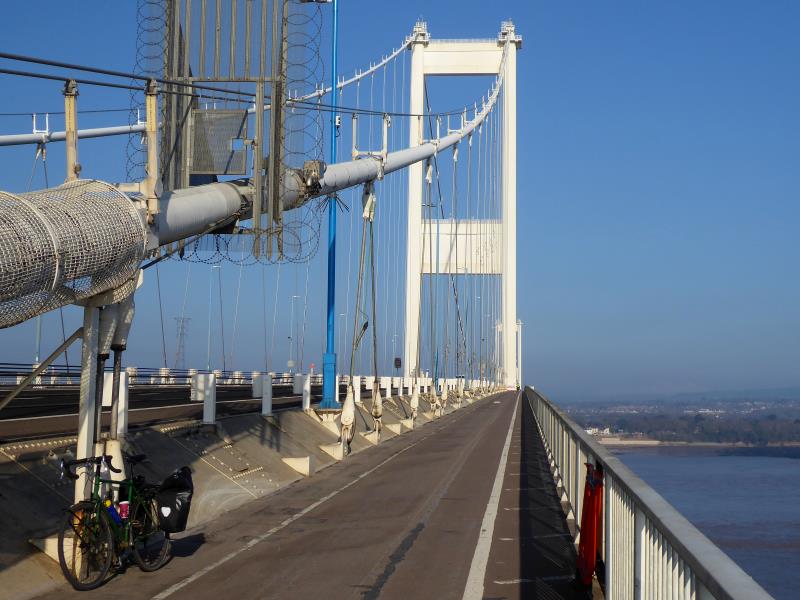 A bit of informal route research today round the Wye Valley. I’d come here intending to ride through the recently opened (2021) Tidenham Tunnel, the vital link in the lovely five-mile Wye Valley Greenway.

I started with a sortie across the (old) Severn Bridge and back, over its dramatic 1.6km cyclable crossing (including the Aust Viaduct, main Severn span, Beachley Viaduct and then Wye Bridge).

It’s rather odd, cycling alongside a motorway. From a motorway services which has customer bike parking. Over a massive estuary and a major river.

Back in Chepstow I carried northwest past the racecourse and up into the hills so I could whizz down the lane of the Anghidi Valley, a very pleasant (and untrafficked) freewheel most of the way.

I was more interested in looking at the magnificent Abbey ruins – not paying to go inside and see them any closer, obviously – and perusing the menu of the cafe, which was full of cyclists who were cycling further and faster than me.

However, I did cross that bridge – a former railway – to do the Wye Valley Greenway back to Chepstow. I knew from my diligent research (Googling the night before) that I’d have a problem. The Tunnel is closed from 31 Oct to 1 Apr because of bats, and I was a few days too early.

That meant leaving the Greenway for a three-mile detour up a very steep forest track, though it was hardly rougher than the unsurfaced railtrail of the Greenway hitherto.

I joined the main road to Chepstow but came off a side lane to scramble my way down to the southern bit of the railtrail – nicely tarmacked – that start from the (closed) south entrance of the Tunnel.

And I got back to Chepstow via the splendid old bridge over the Wye. I started my Welsh End to End here in 2020. Curiously, on the east side it says WELCOME TO ENGLAND, but on the west side, just MONMOUTH.

All in all, a very nice loop. But rather more fun when the Tunnel’s open.