The fourth of my Rivers Rides was a splendid two-day, 100-mile trip from Yorkshire’s one-lake Lake District to its three-power-station powerhouse along the River Aire. Day 1 featured England’s highest lake, a disappearing river, stunning canal scenery, floods, a fairy story, a World Heritage Site and a Wetherspoon.

This is the source of the Aire (pic): the glacial beauty of Malham Tarn, 377m up on the roof of some of the country’s most dramatic limestone scenery. Welcome to Yorkshire’s Lake District, even if there is only one lake. Yorkshire’s Titicaca, even if it’s a bit lower down. It’s fed by springs running off the surrounding slopes (pic). It was remarkable to think, as I pedalled up the steep hill from Malham, that the drizzle which wasn’t working its way into my sandwiches would find its way into the tarn, and thence downward a hundred miles to the North Sea. How does it know where to go?

The Aire starts here – if not quite in name yet – at Tarn Foot, at the southern end of the lake (pic). But a few hundred metres later, a very strange thing happens…

…because it ducks under a wall (pic)… 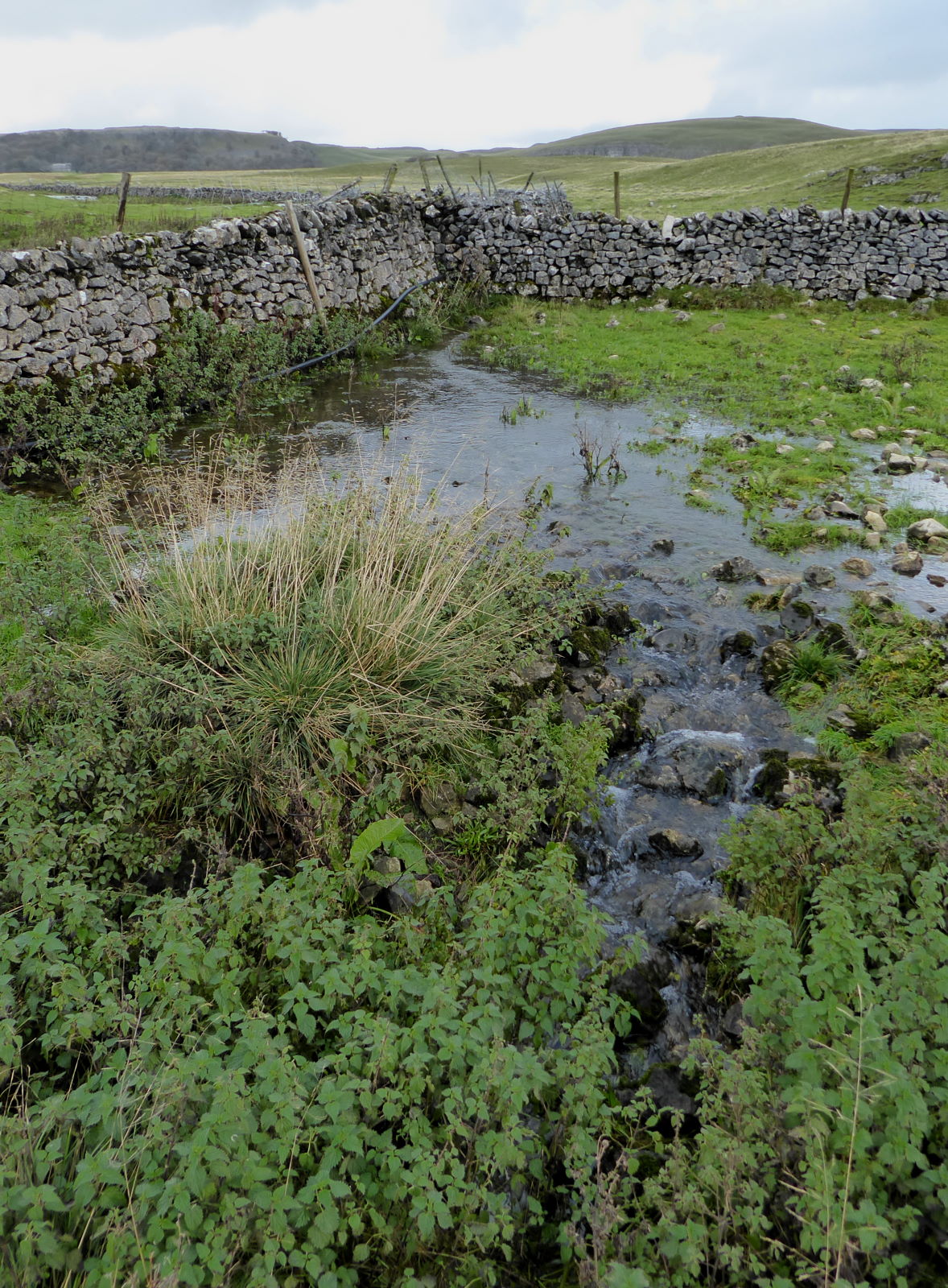 …and dives down into a bed of nettles (pic).

And then, like a dodgy diplomat’s wife evading responsibility for a fatal driving accident, it just disappears.

So, from here I zoomed down the steep back lanes to the wondrous village of Malham, which I talk about in a previous post on this blog.

A couple of hundred metres south of Malham, along a boggy footpath, at a place entertainingly called Aire Head, another very strange thing happens… 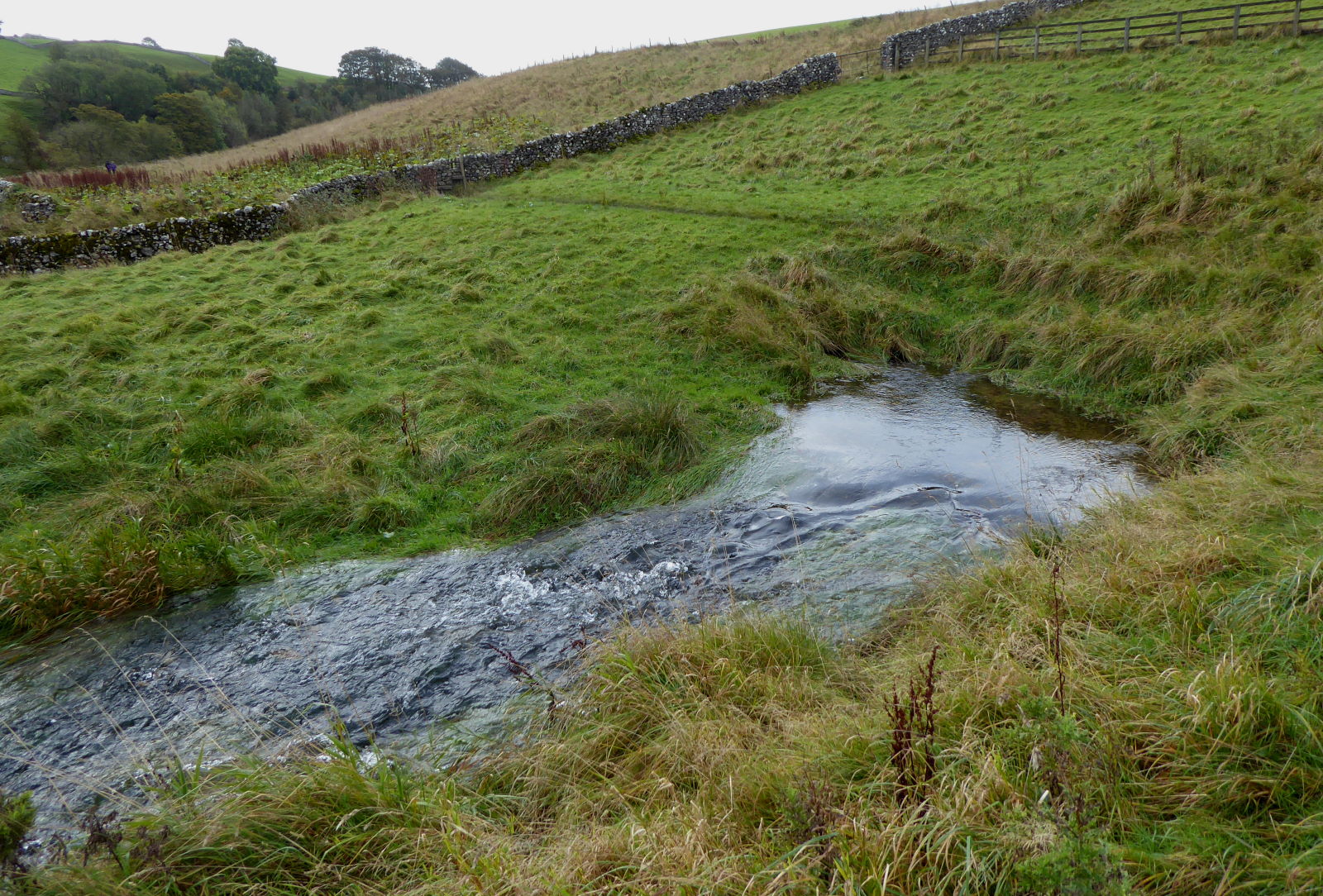 …because, like a dodgy insurance fraudster canoeist turning up in Panama without a paddle, the Aire springs out of the ground (pic), all innocent like, 1500m south and 180m lower from where we last saw it. Where’s it been? What’s it been doing? Nobody knows.

At least we know that it is that same Aire which started out like butter wouldn’t melt back at the lake. That’s because, in the 19th century, they dammed Tarn Foot to see what would happen. Sure enough, Aire Head went very quiet, then – half an hour after the dam was removed – it gushed again. 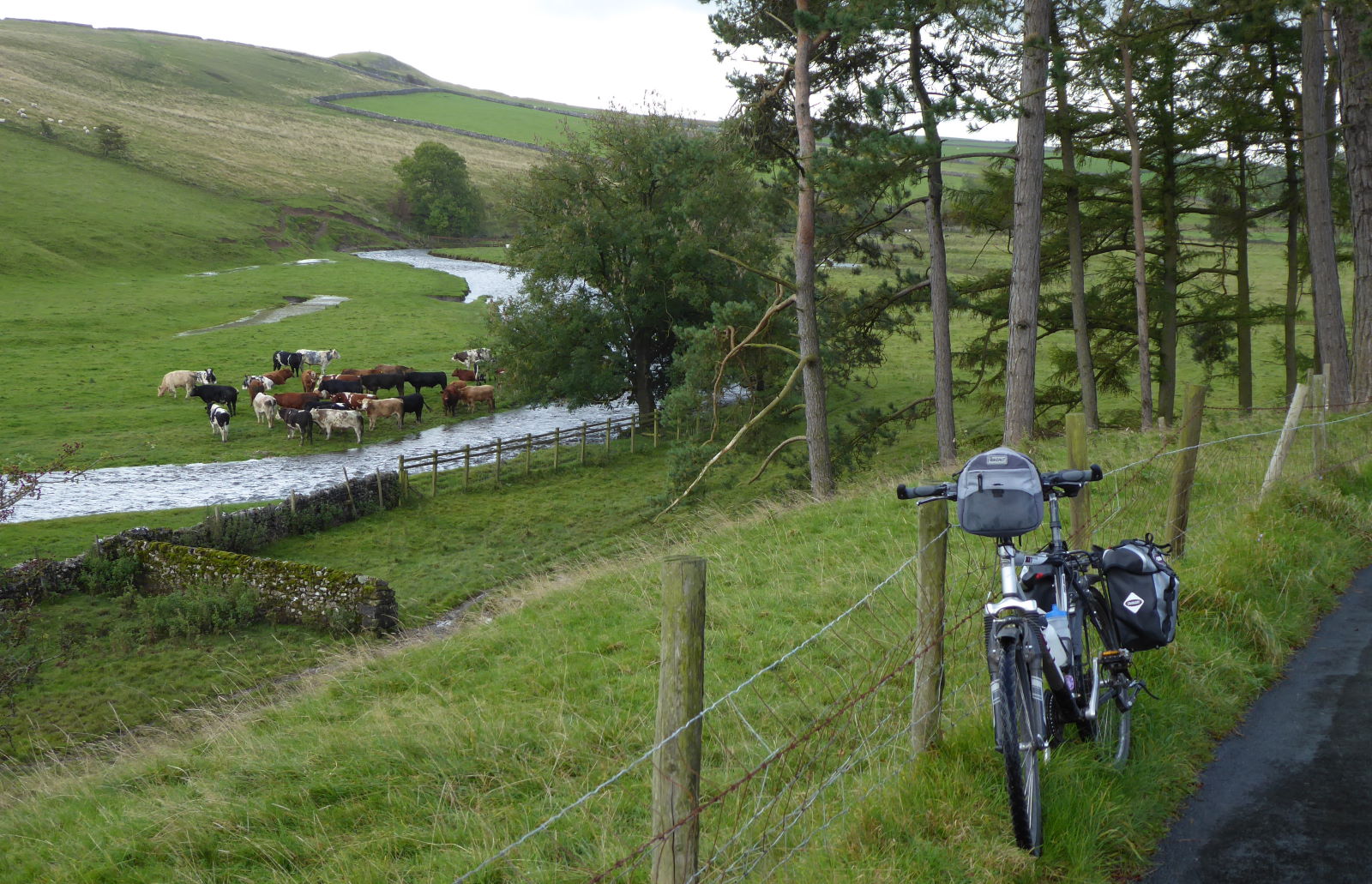 Now the river gets going, winding its way down some fine dales scenery (pic). The cows are clearly rubbish meteorologists: all standing, yet it was a day of constant drizzly showers. With sunny intervals in between. One of those days when you simply can’t decide whether to be in or out of your rainjacket. Taking back control is an illusion. Yet another metaphor for Brexit. 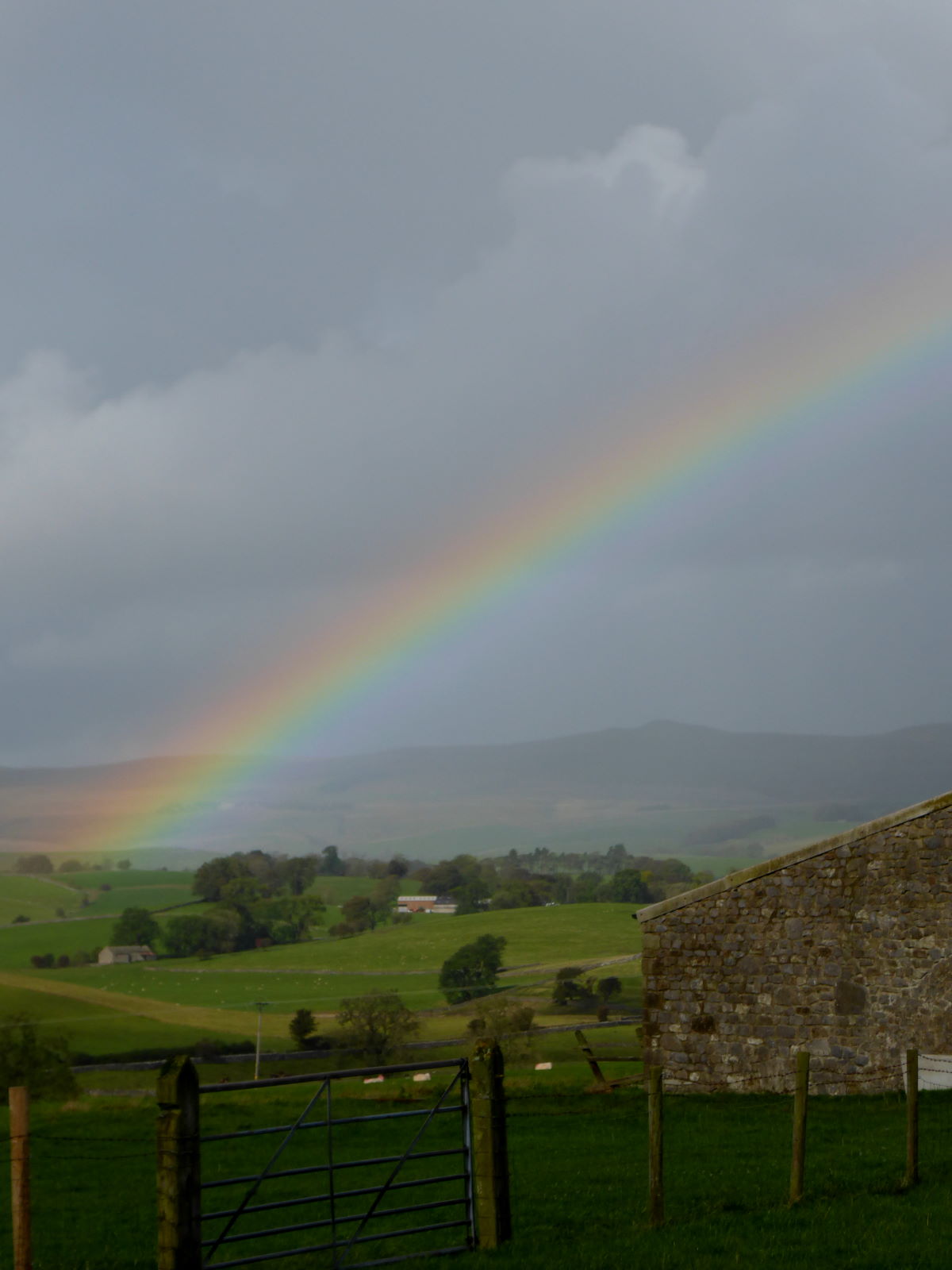 Hauling myself from Bell Busk to Gargrave over Mark House Lane – described as a ‘bridleway’ on the OS map but perhaps more accurately called a ‘stream’ – I enjoyed seeing this rainbow (pic).

No crock of gold, but a crock of something else, thanks to the cow-friendly farmyard I’d mistakenly ridden through while getting my bearings.

At least the stream’s abundant waters washed my wheels and lower frame as I clattered down the track.

In Gargrave, I joined the towpath of the Leeds–Liverpool (pic), England’s longest single canal, which follows the Aire valley all the way to Yorkshire’s capital. They’re resurfacing it, though the stretch east between here and Skipton (and east from Skipton to Silsden) is still unmodified, bumpy mud.

Anyway, the towpath was closed for the refurb works for cyclists’ safety, but luckily there is an alternative, viz the busy, HGV-infested, semi-lethal A65. 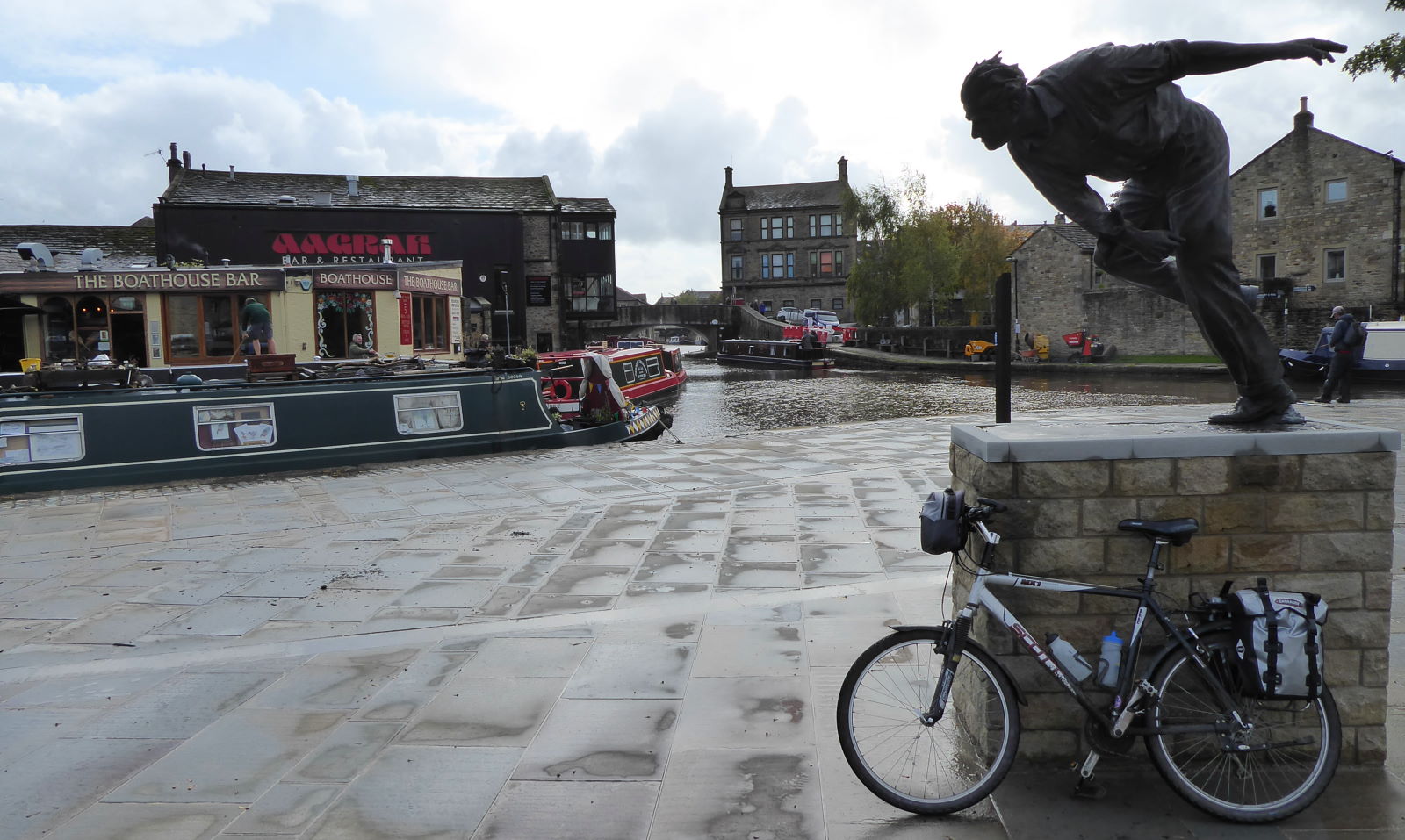 Skipton (pic) is a handsome, likeable market town with a picturesque canal basin, lots of fish and chip shops, friendly locals who direct you when you get lost, and a superb statue of Fred Trueman, the greatest fast bowler who ever lived, in the opinion of experts such as Fred Trueman. Post-cricket, he made a successful career as a professional Yorkshireman.

I love the statue – it brilliantly evokes the man’s delivery-stride swagger, momentum and poise. The work – by Yorkshire sculptor Graham Ibbeson – is one of the best examples of that modern thing of a statue celebrating the idol in action (see also Morecambe, Eric); not standing statically, like those mutton-chopped Victorian blokes, or menacing colonial generals.

The only thing it lacks is a speech bubble of Fred roaring, ‘Tha’s aat, Gunga Din. Get thissen back to t’ pavilion. Join me next week in Indoor League. Ah’ll sithee’.

From here to Silsden I avoided the quaggy towpath and followed minor roads along Airedale, which afforded splendid views of the scenery, and the flooded valley (pic). I went through roadwork signs outside Cononley saying ROAD CLOSED because, of course, you can always get through on a bike, and, of course, I could.

I heard the drivers arguing in vain with the roadworks crew who all spoke with friendly but impenetrable Polish accents. Then I realised they were actually Scousers. 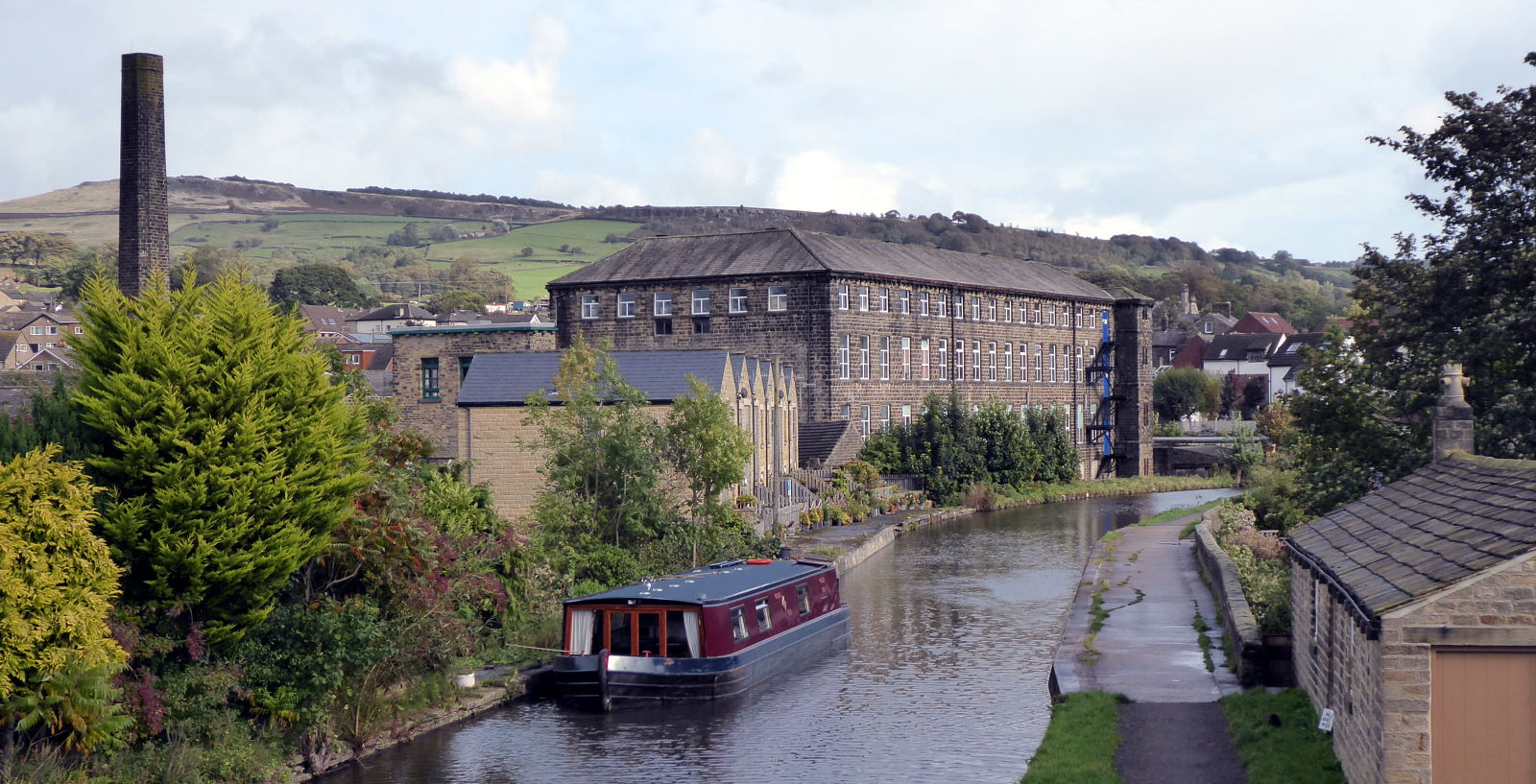 In Silsden I got back on the L–L towpath (pic), now surfaced, continuing its scenic paralleling of the Aire itself. Then it rained again and the towpath got muddy again. But I was on my trekking bike and I was happy. 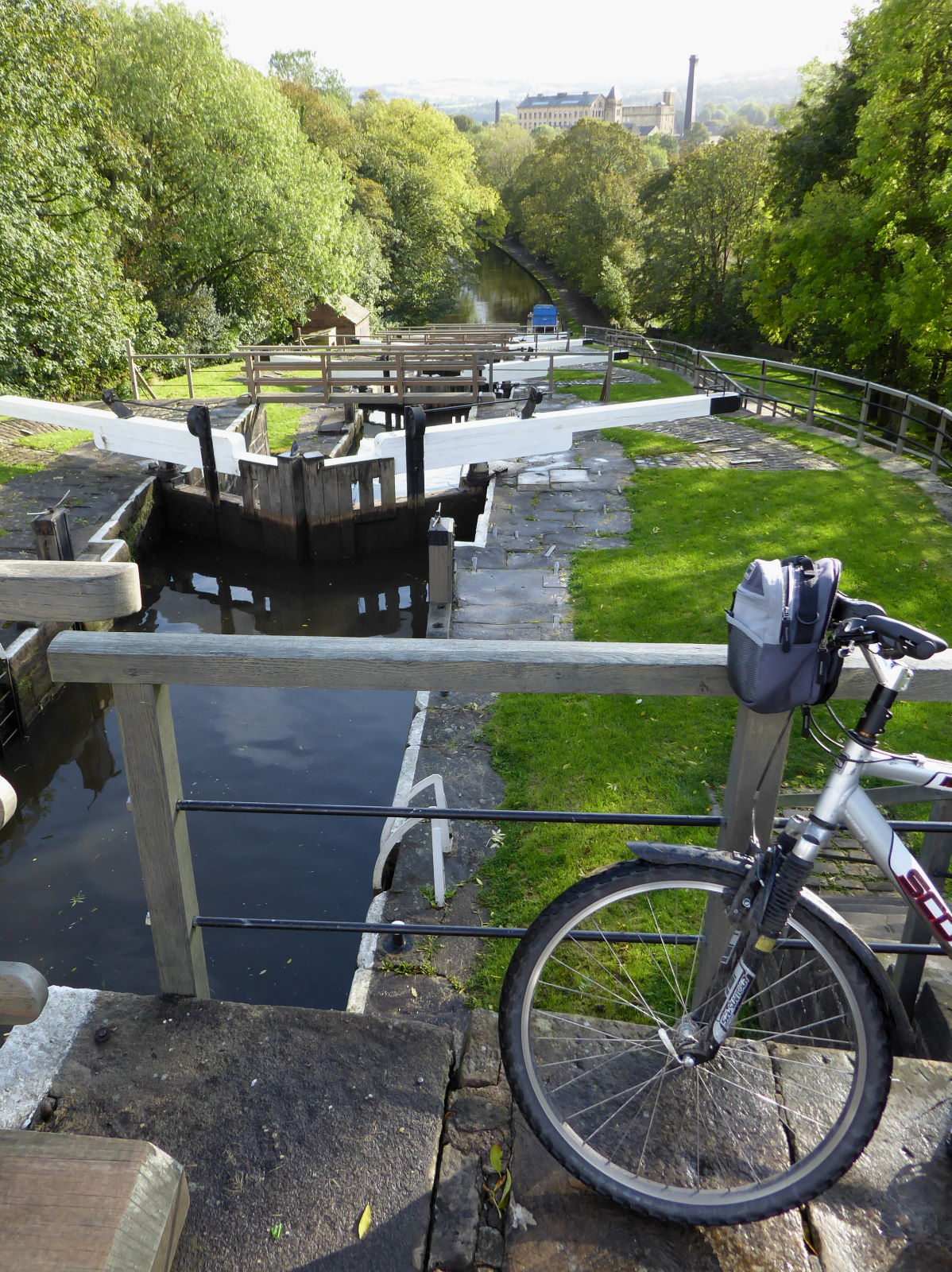 Outside Bingley I enjoyed the sheer drop down Five Rise Locks (pic).

This is Britain’s most vertiginous stretch of towpath at 20%, and done rather quicker by bike than by boat.

Even uphill. Even me.

Alas, I didn’t have time to stop, because I then diverted through Cottingley, intent on researching the village’s famously elusive real genuine authentically faked fairies, which I’ve blogged about separately. 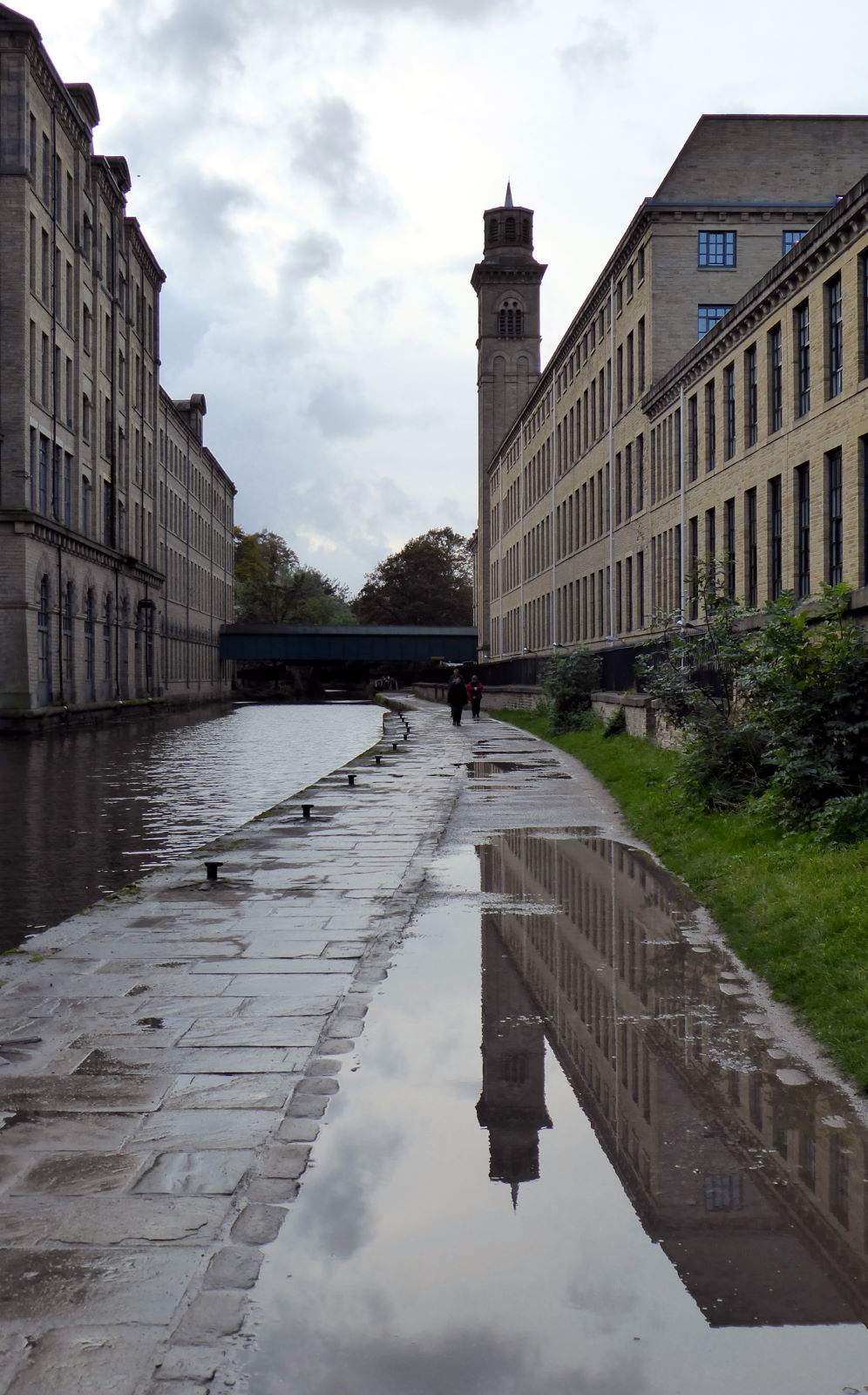 A little further on is Saltaire, Titus Salt’s Victorian model village for the workers at his grand Aire-powered mills (pic), now a World Heritage Site.

The puddles are great for reflecting the austere grandeur of the mill buildings. They’re less great to keep cycling through.

The back streets of Salt’s model terraces commemorate family members and mill workers. 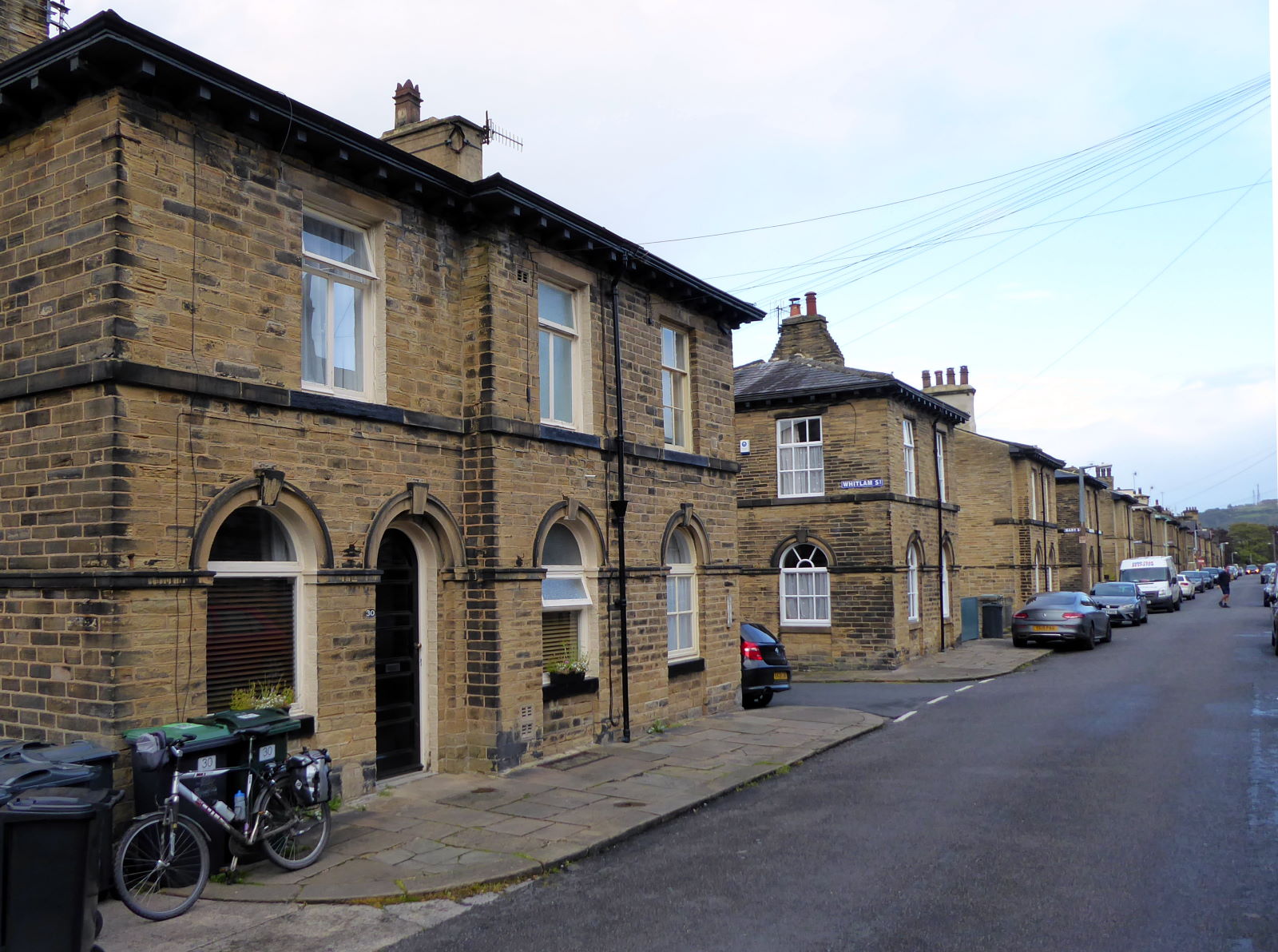 Saltaire’s characterful houses (pic), top of the range for their time, were complemented by facilities such as bathhouses and a hospital. Titus wasn’t having any pubs, though. So what he’d have made of the Wetherspoon in neighbouring Shipley where I enjoyed a £2 post-ride pint or two is anyone’s guess.

It had been a very good day, with a wide range of scenery, sights and refreshment opportunities. As I sat on my comfy bed, post-shower, in my bargain single room in a modest Shipley hotel, I congratulated myself at how fresh and energetic I felt after forty-odd miles of mostly offroad, fairly strenuous cycling. Only half past seven, I thought: I could go out and have a night exploring Shipley’s pubs.

Instead I went to bed, one of many good decisions I made today, and fell asleep immediately.