Day 2 of the River Aire ride featured a river under a railway station, a tale of three power plants, more reminders of the county’s cycling pre-eminence – and a lot of mud, both under my wheels and at the mouth of the river. 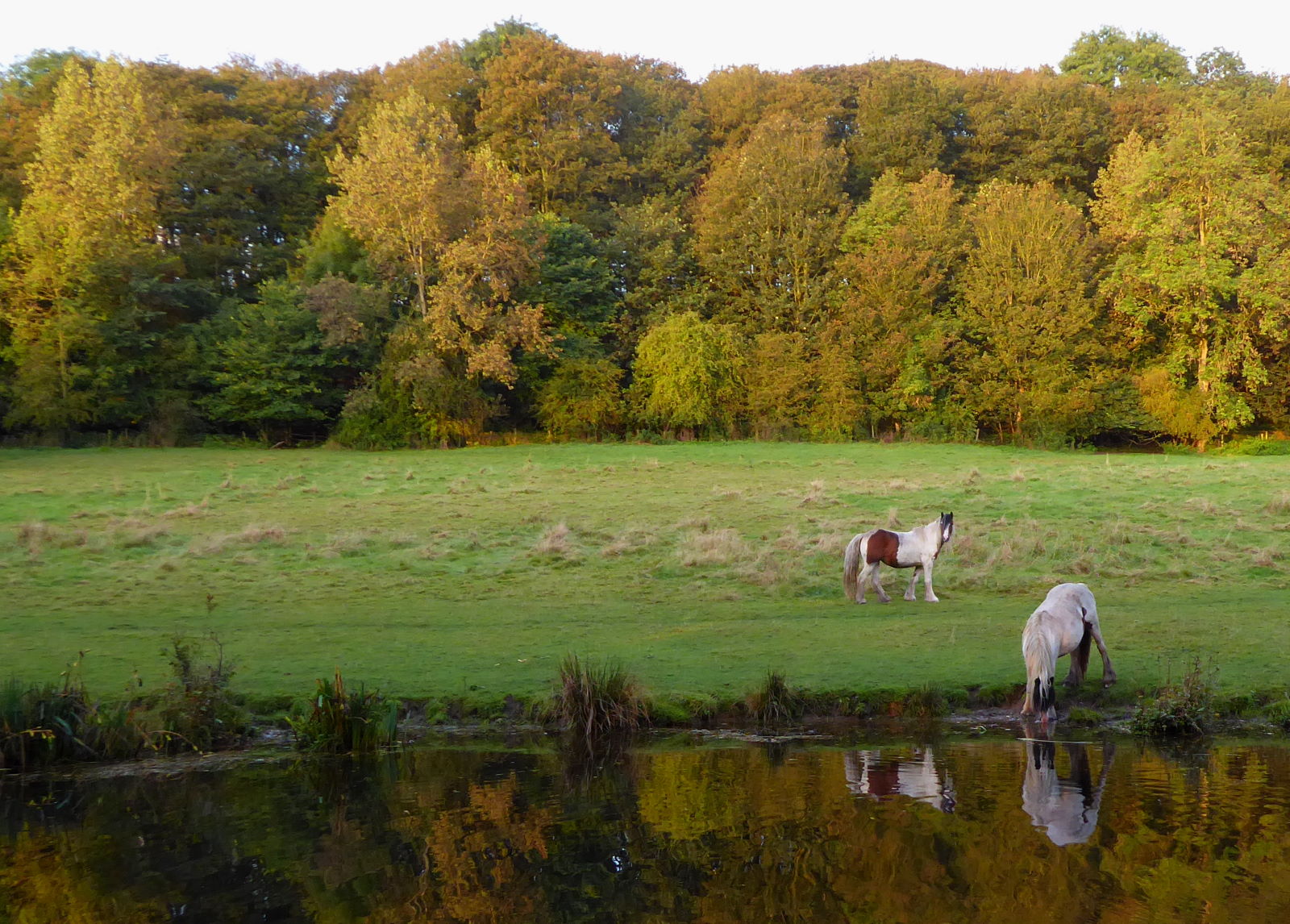 I was out bright and early along the canal, heading to Leeds, Yorkshire’s national capital. Wild horses clearly are not the sole preserve of Dartmoor or the New Forest (pic). 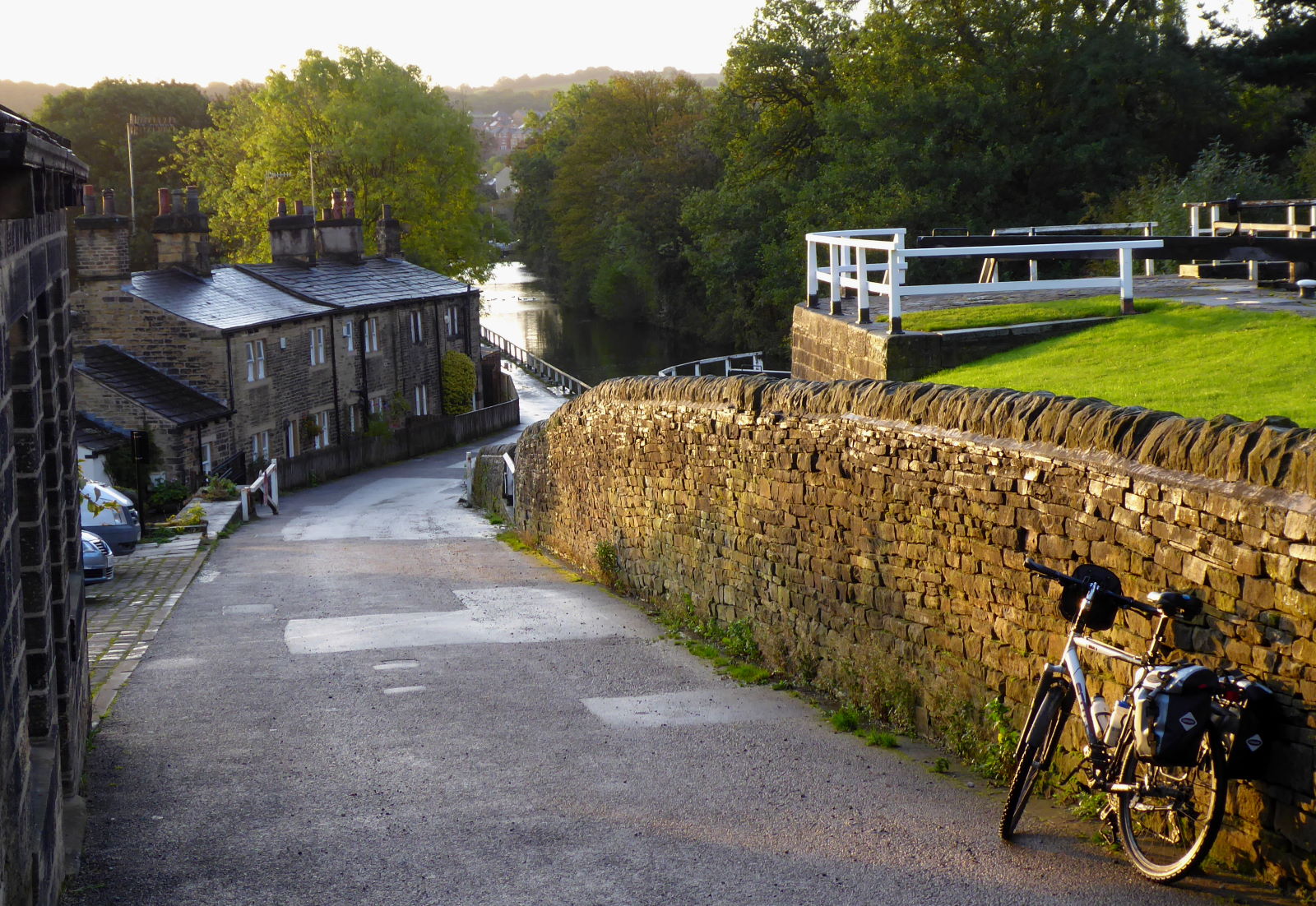 The sunshine was low and golden, and it was downhill all the way to Leeds (pic). The towpath is excellent, apart from a fraction of the time where it’s muddy, uneven and puddled. A fraction of about four-fifths. 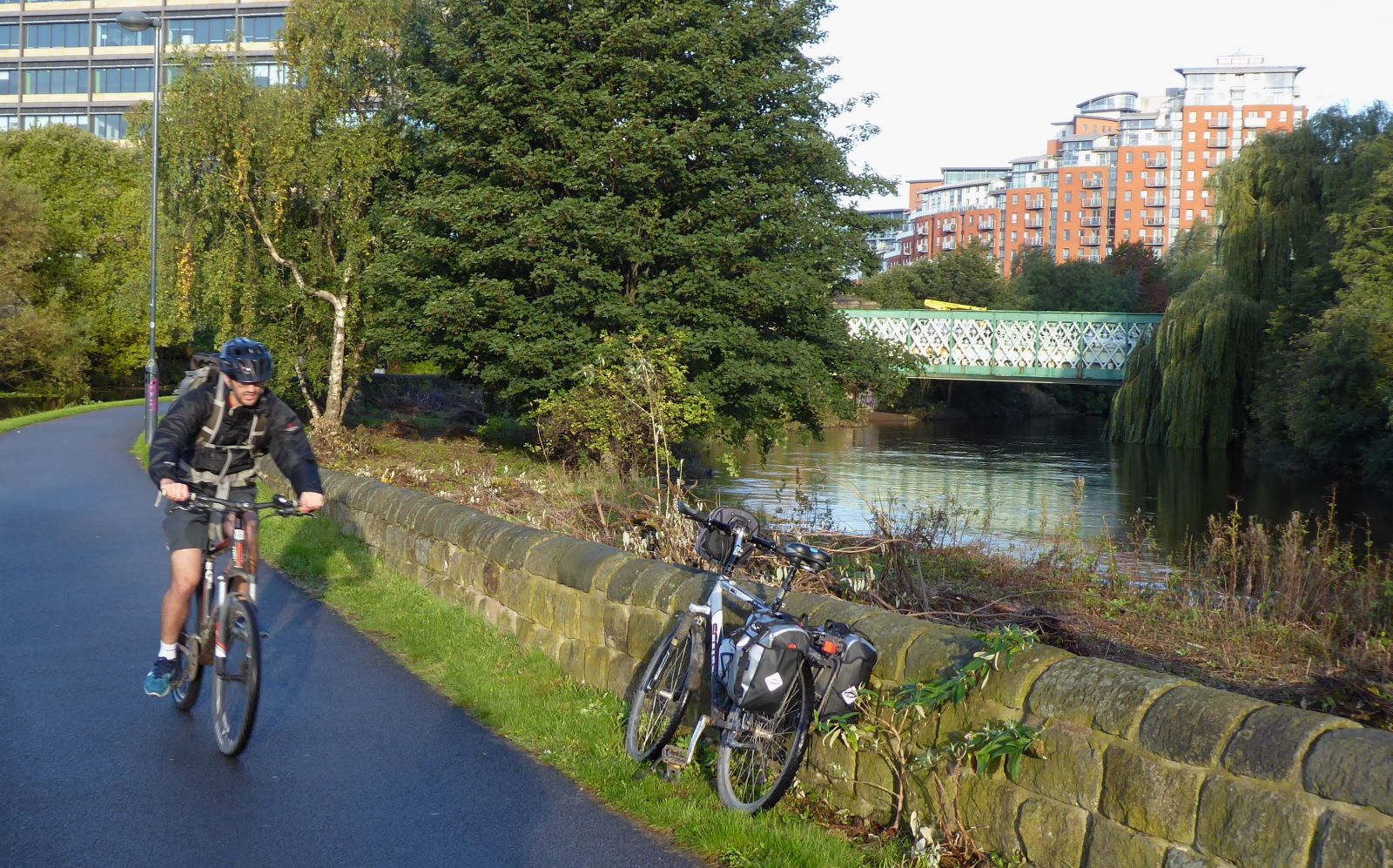 Approaching the city, I was not alone. It was rush hour, and cyclists and walkers thronged the towpath (pic). Like the joggers, the canal and river run alongside each other. 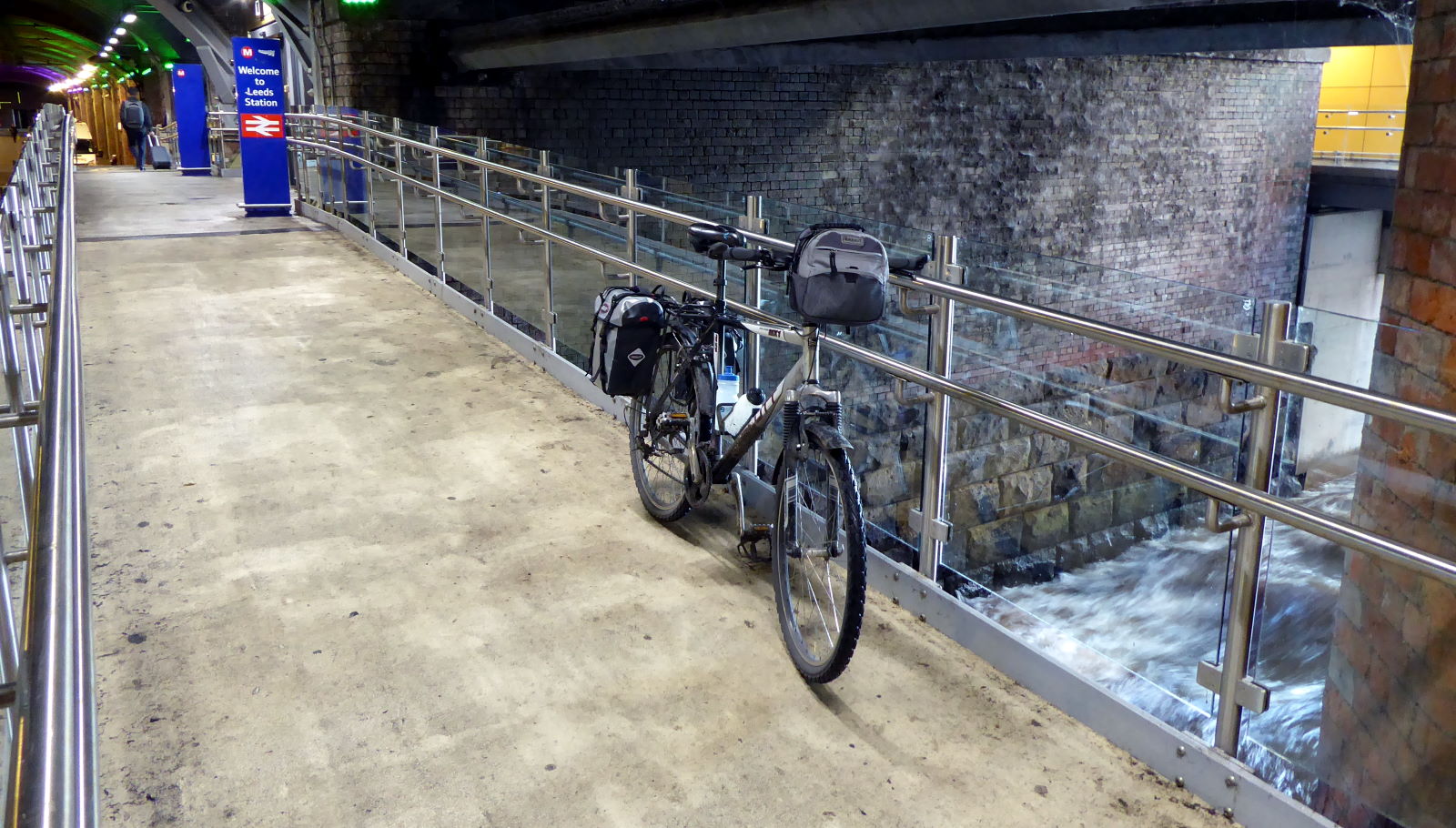 The Aire thunders dramatically through the catacombs underneath Leeds railway station (pic). Venturing here used to be the preserve of urban explorers; now it’s busy with commuters toting takeaway coffees and explaining on mobiles why they’ll be late in.

The station interior has been remodelled too, and more than ever it’s Yorkshire’s closest glimpse of London, with a shiny concourse and lots of smart young people walking purposefully to the rhythm of money. 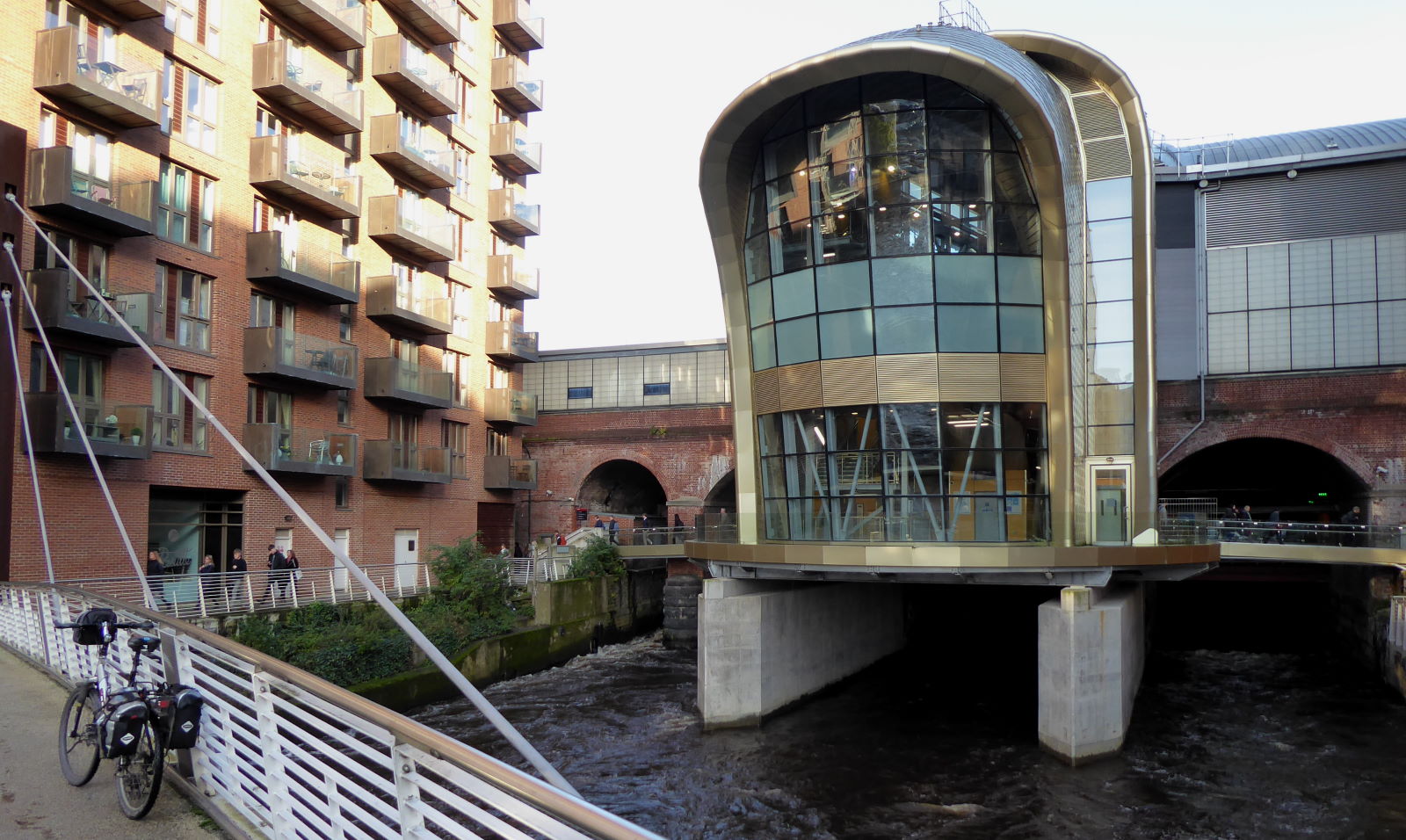 There’s now this entrance up from Granary Wharf basin (pic), over the Aire and directly up and into the southern platforms, making it easier than ever to arrive in good time to find Northern have cancelled your train. 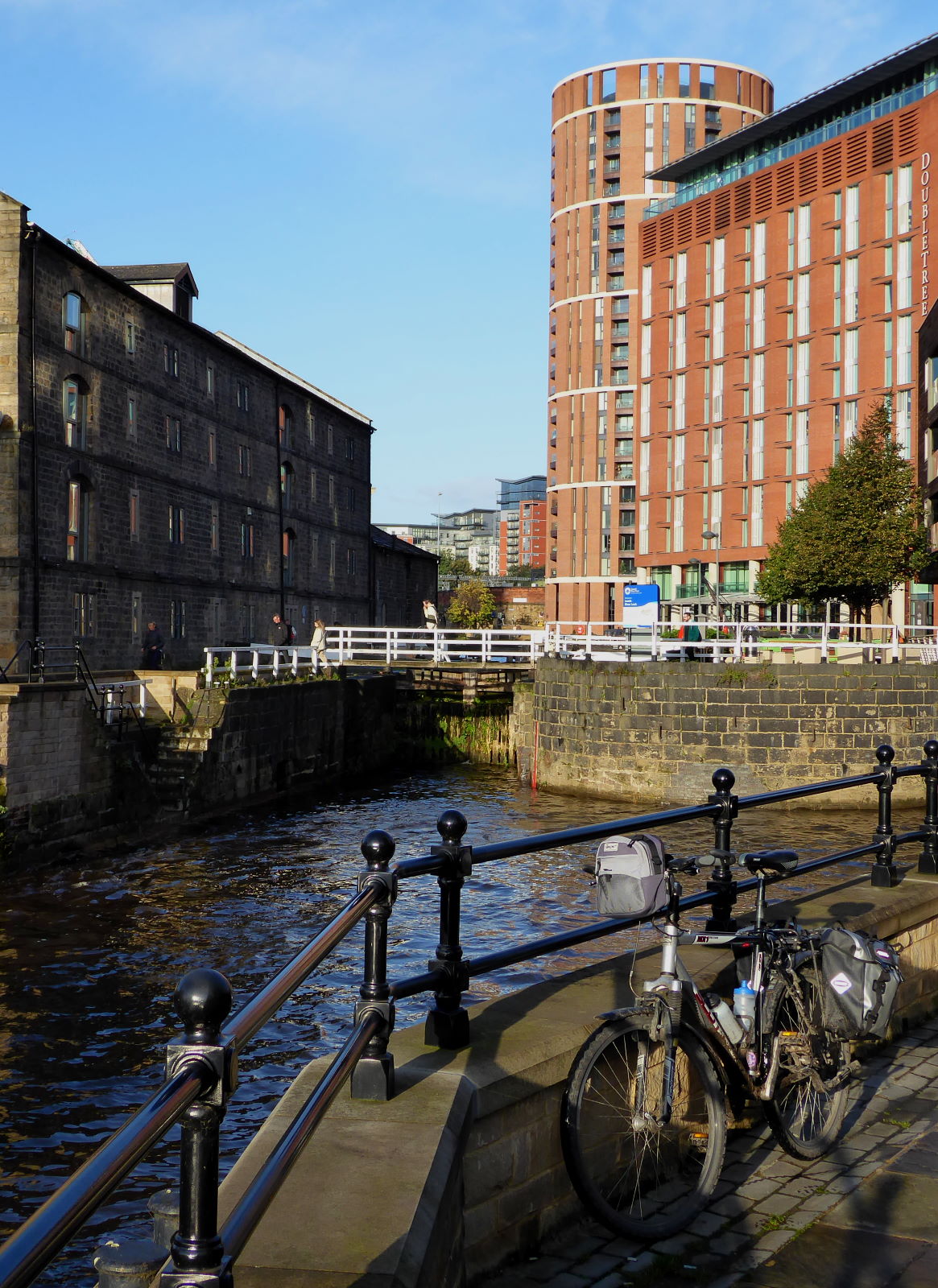 There’s a water taxi from here to the Armouries: at a quid for the ten-minute journey it’s a great way of sightseeing Aireside Leeds, but getting a bike on would be impossible down the steps.

And anyway I had to go through the centre of town to find a Greggs bacon roll.

The view over the river from Leeds Dock is impressive (pic), and as you leave the city limits the towpath is in good nick. Then it’s back to mud and puddles. There’s also one slightly challenging bridge crossing with steep steps, but a little expertise in scrambling, abseiling, and perhaps dismantling your bike, will make it easier.

The Aire now runs parallel with the Aire and Calder Navigation, whose towpath forms part of the Trans Pennine Trail. It runs past the grand nature park of St Aidan’s, a former opencast mine. If mills were a feature of the upper Aire, heavy industry defined the flavour of the lower Aire from the 1800s to the 1970s. A flavour of sewage, industrial runoff, arsenic, cadmium, etc.

The water quality has improved massively since then, with fish returning to the river. We’ve spent hours in St Aidan’s once or twice in the past, most of it trying to find our way out. Those TPT signs can be pretty contradictory. Goodness knows how the fish find their way.

By dint of ignoring TPT signs and a long muddy snicket, I found my way to Castleford, which has a splendid curvy ped and cycle bridge over the Aire (pic) by the historic Queen’s Mill, once the biggest stonegrinding flour mill in the world. After nearly two days of cycling through mucky water, my bike’s drivetrain was doing a pretty good impression of grinding querns. And felt about as light. 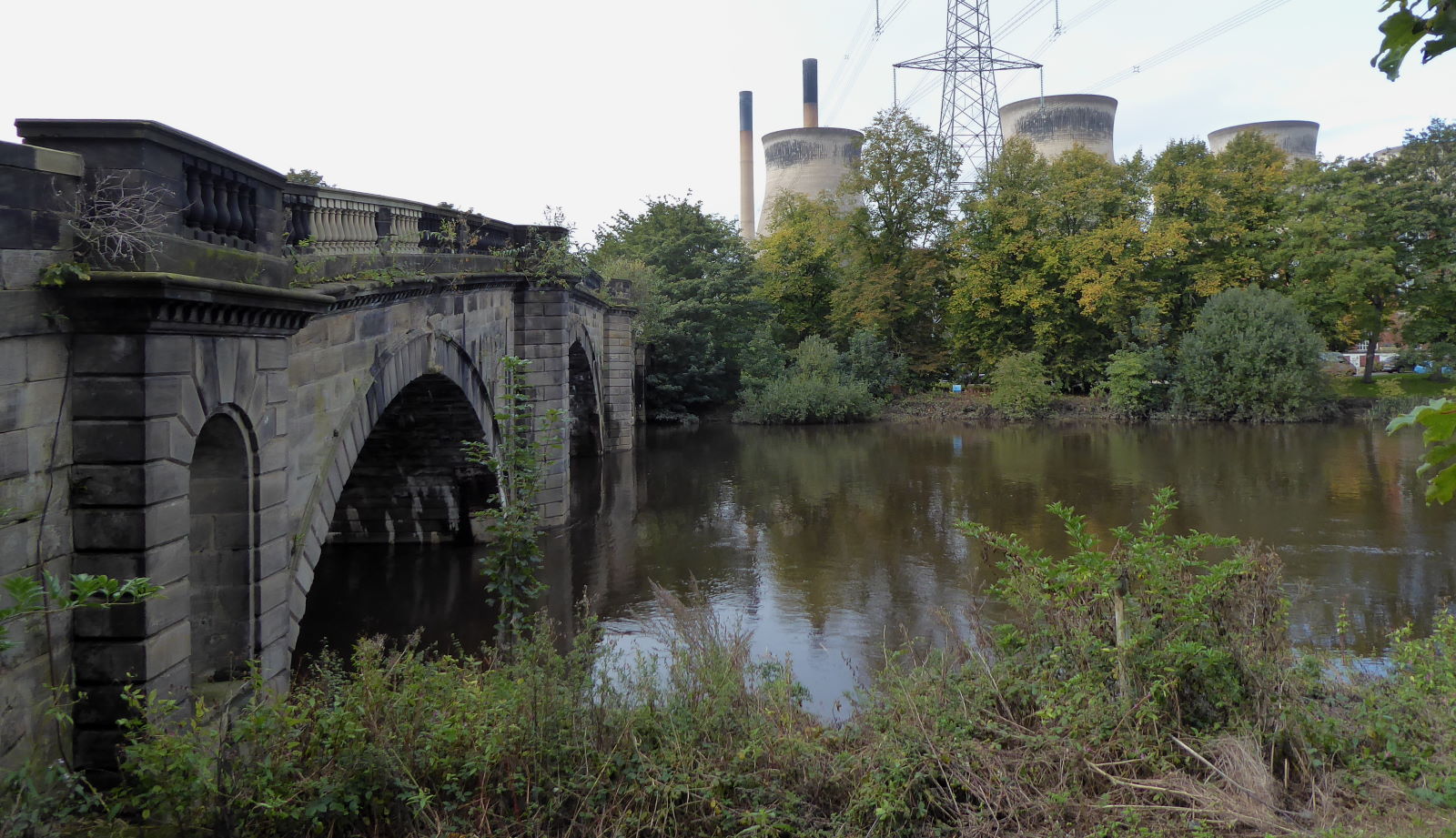 From here the Aire ‘valley’ spreads out into flatlands, the river starts meandering chaotically, and roads give only fleeting views of the waters. And for fans of hyperboloids, good news: the dominant sight now becomes cooling towers, forests of them, in the three huge power stations that sit on the lower Aire: Ferrybridge (pic), Eggborough, and Drax. 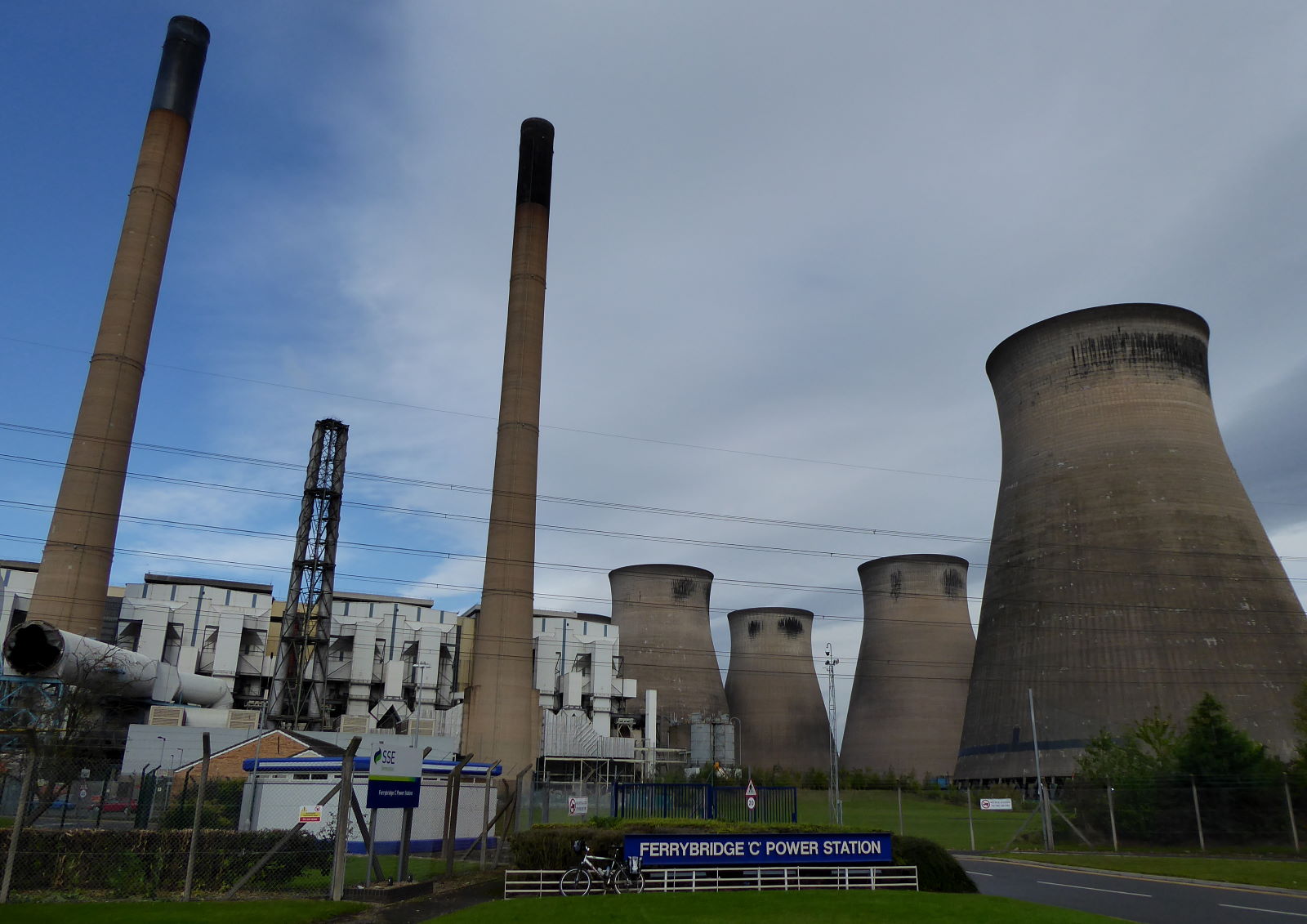 But not for long. Ferrybridge C (pic) set fire to its last chunk of coal in 2016. I passed just in time to see these cooling towers intact: four of them were demolished four days later. (Here’s the BBC website report and video of it.) 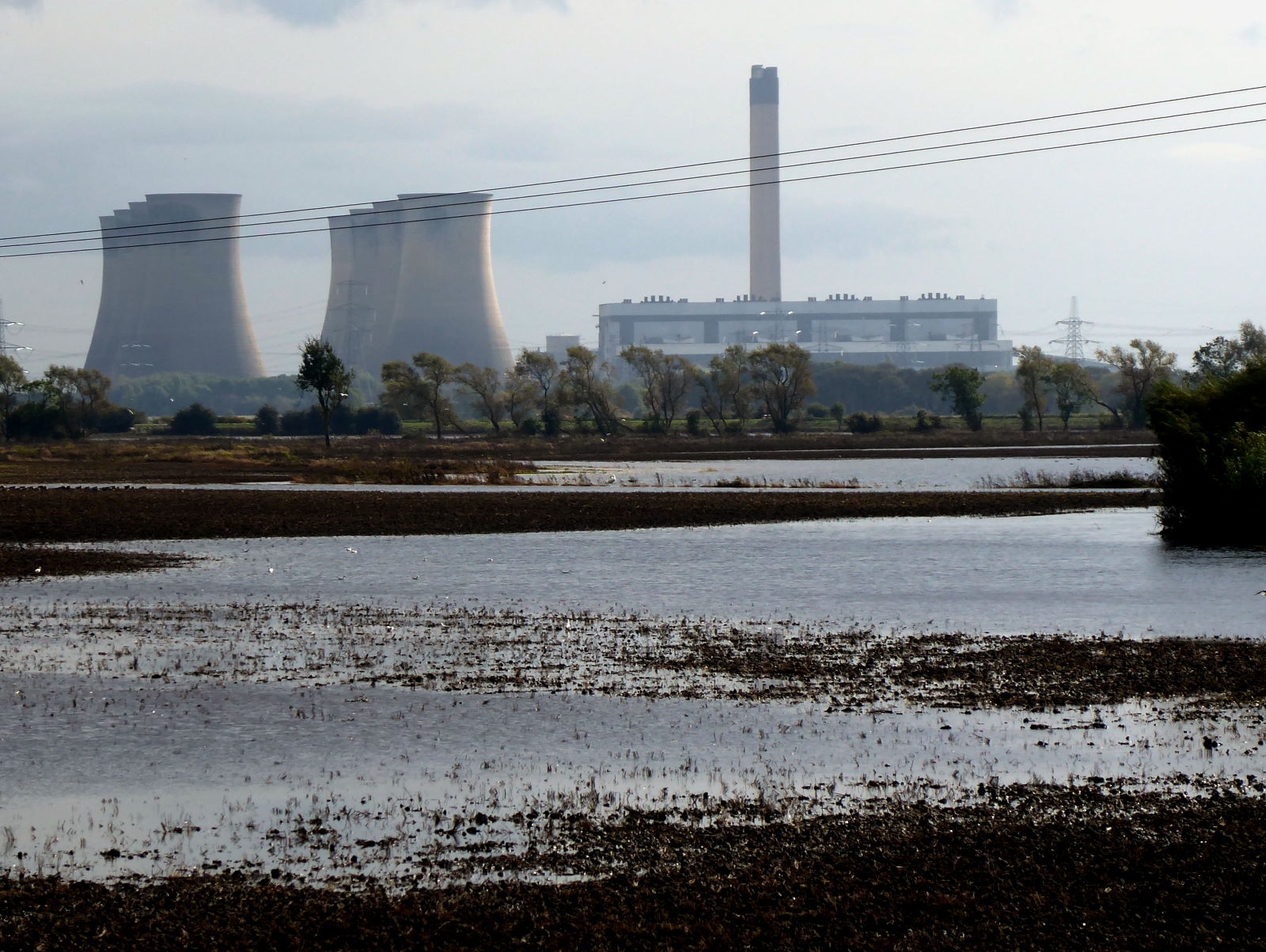 Eggborough (pic) shuffled off into retirement in 2018, but Drax is still going, carrying on the traditional Yorkshire crafts of coal-fired power generation, pollution and unsustainable carbon emissions. Hmm; so much for the Northern Powerhouse.

I enjoyed trundling through the pleasant small towns of Snaith (with a fine church and a lavish number of pubs) and Rawcliffe (with a lovely, picnickable green and some nice frontage on to the Aire). I also had a big tailwind, which helped. So it wasn’t long before I rolled into Airmyn, on the river’s mouth – indeed, the suffix ‘-myn’ evidently is an old word for ‘-mouth’.

Airmyn is inspiringly enthusiastic about cycling: the entire riverside, in the Aire’s final stretch, is dotted with yellow and blue bikes (pic). It felt an appropriate end to my ride. Passing the handsome clock tower I passed a sign saying Please respect the welfare of the pigs by shutting the gate. Their well-being duly respected, I walked along a footpath to the end of the Aire and the very end of the trip.

This is the mouth, where the Aire joins the Ouse just north of Goole (pic). A suitably muddy but large-scale finish to Yorkshire’s most industrial river, and perhaps the one with most variety of sights. It’s a lake! It’s a river! It’s a canal! It disappears and comes back!

So, I cycled on to Howden, another fine town with a glorious minster and attached ruins, and enjoyed a pint brewed in Snaith for £3.10 before my train home.

Another very enjoyable rivers ride, and given the amount of bumpy offroad and towpath riding, I chose the perfect bike for it (my trekker, an adapted Scott MX1 MTB with front suspension and 42mm tyres). Once I’ve cleaned it I might remember what colour it’s supposed to be.