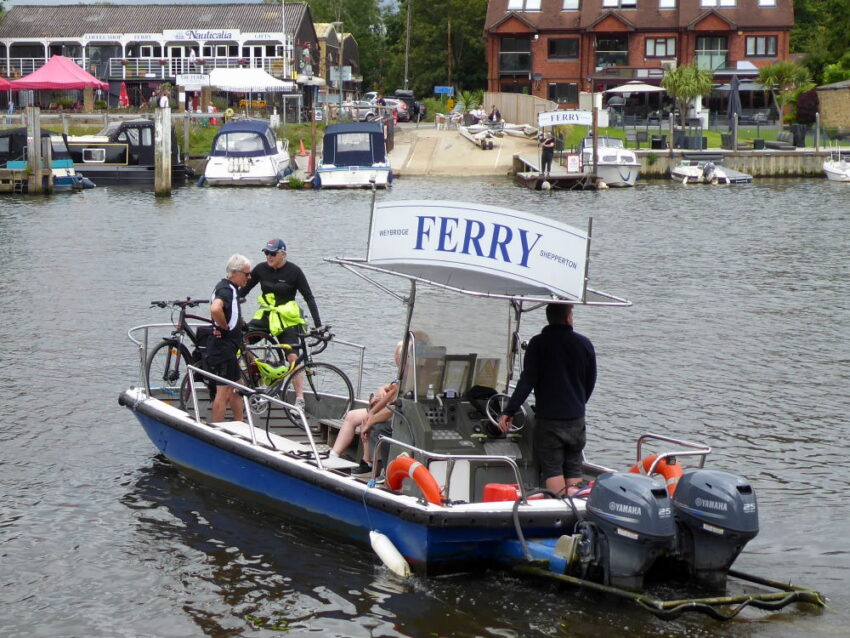 Today involved a lost dog and lost wife (both found), a scientific trial on the efficacy of toothpaste as an anti-histamine, a great park, and a great Italian restaurant.

There was an incident in the morning. We were just enjoying our slap-up breakfast – well, actually, a paper bag with a yogurt and sandwich, because the dining area was still a building site – when a distraught woman tearfully asked us to keep an eye open for her beloved lost dog, Max. He’d run off, something he’d never done before, and she was terrified he might be run over.

A couple of the lads went off to explore the surrounding woods to see if they could find him and the others stayed to console the poor lady. An hour later, with the lads returned empty-handed but sporting plenty of nettle stings and thistle rash, the staff wrily informed us that the dog had been found, asleep in the lady’s room.

We spent the morning looking round Brooklands Museum in Weybridge, a few miles down the road. While others were looking at planes, buses, racetracks, vintage racing cars and memorabilia, I was happy looking round the cycle museum, which I’ve blogged about separately.

While wandering the museum grounds, I was approached by a dapper chap who had lost his wife, and who didn’t have his mobile with him. I called her with no reply, so left a text informing her of his whereabouts. I wondered if I’d get a reply along the lines of ‘I am now on my one-way flight to Australia to meet my secret lover. Tell my husband goodbye and his dinner’s in the oven.’

Or maybe she was simply asleep back in the hotel room, like the dog. But, no, fortunately, as a text eventually informed me, husband and wife and mobile phone were happily reunited.

Back in Shepperton, we took the tiny peds- and bikes-only Nauticalia Ferry across the Thames. The two-minute journey is great fun. It’s particularly popular with people from the Isle of Wight, because it’s the only ferry whose rate per hour makes the Southampton to Cowes crossing seem cheap.

Sometimes on, sometimes away from, the river, more flat paths got us past some very desirable houses and equally desirable, if more affordable, ice cream.

One of the highlights of the trip for the lads was stopping off to admire Maranello, the Ferrari showroom in Egham. Further on was the steep climb up Cooper’s Hill to Runnymede Memorial. Stately, tranquil and moving, it commemorates the 20,000 air force men and women who died in World War II.

From here the ‘Thames Route’ runs across the open green spaces of Windsor Great Park, and into the town of Windsor itself.

The hotel here turned out to be entirely finished, and a bar which didn’t require the wearing of a hard hat and steel boots. After a quick freshen up and drink, we ambled into Windsor to enjoy a fine evening’s food and entertainment at an Italian restaurant.

We had a great time trying out our Italian with the exuberant waiter, with phrases such as Un tavolo per sei, per favore (‘A table for six, please’) Un’altra bottiglia di Soave per favore (‘Another bottle of Soave, please’) and Non c’è bisogno di chiamare la polizia. Andremo tranquilli. (‘There’s no need to call the police. We’ll go quietly.’)