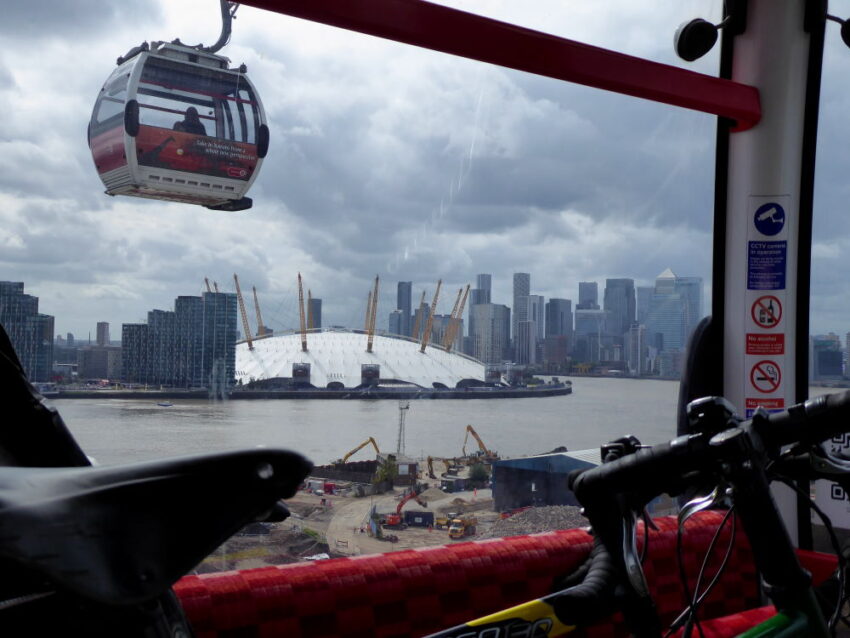 The final day of the Guided Tour involved a cycle cafe, more London canals, a cable car ride, and (for some) a wait mean time – well, it was Greenwich.

Adrian had a mystery puncture in the morning – one of those that presents as a totally deflated unredeemable flat, but when you’ve gone to the bother of replacing it with a new inner tube, the old one then pumps up fine and hole-free. Meanwhile I went off to Cinnamon Cafe, a cycle-friendly cafe in the old station in town, to investigate it for work purposes. The lads joined me and we had a coffee and muffin – our first since breakfast since nearly an hour ago – before a quick trip to admire Eton College.

The splendid college buildings took our breath away, particularly when we found out the scale of the fees (£15k per term, and £640 per hour extra for music lessons, which is even more than the Shepperton Ferry).

Back in Windsor, over the pedestrian and cycle bridge, we took a train back to Waterloo. From here it was more cycling on segregated cycleways to Tower Bridge, through St Katharine’s Dock, and along the Ornamental Canal to Limehouse Basin. Then it was the Regent’s Canal through Mile End Park and on up to Victoria Park, where we had a snack lunch.

With an eye on the time and the need for some of the group to be at Kings Cross for a 5 o’clock train, I finessed the route to take us on the Greenway past the old Olympic park and then down some humdrum roads to the northern end of the Emirates Air Line – the only urban cable car in Britain, running from Victoria Dock over the Thames to the O2 at Greenwich.

The pace of life was a little different here to the rest of the city. Because the queue wasn’t moving at all. The problem, as we gradually realised, was that nobody could get on because nobody was getting off. Almost all those pesky passengers boarding at the O2 end were simply staying on as their car lumbered round at the northern end for a return trip, and possibly more, eking out as many rides for their £4 contactless fare as they dared. It took nearly an hour before we could get in and get over, but, it has to be said, it’s a remarkable experience, soaring over the Thames with a drone’s-eye view of the O2 and Greenwich peninsula.

With time even shorter thanks to our wait, we had to ride smartly to Greenwich station to put the the first party of three on a train that would take them back to central London and within short cycling distance of King’s Cross.

John, Gary and I stayed on to explore Greenwich a little, climbing up to the Observatory to enjoy the view over the Thames, and see both Eastern and Western Hemisphere straddling the zero-meridian line. We then slowly returned to the centre along the riverside path on the south bank.

I had a quick celebratory fizz with John and Gary in Granary Square’s Canopy Market before they left on their train, and I sat out the hiatus to my own train with another dash of fizz and some marked-down sushi from Waitrose.

Phew. A great trip with great people, lively and fun and full of good views, good times and humour. But now, I think, I need a couple of days to recover. Cheers!