I woke up to a minor disaster.

At some point in the night – presumably during my dream about a house collapsing – my laptop had slid off the bedside table on to the casa’s hard stone floor. The screen was now as cracked as a tour-minibus windscreen, and worked as a touch screen about as responsively.

I stayed calm, in a panicky sort of way. I had a mouse, but to reset the laptop to work with it, I had to log on. To log on, I had to swipe down. And to swipe down, I had to scrabble frantically with my forefinger like a squirrel climbing a greasy pole to a bird feeder. I managed it, just. My laptop was damaged but usable. But I was furious with myself for letting it happen.

Breakfast cheered me up though (tortilla, sweet guayaba juice, bucketfuls of coffee) and I cycled out through the Parque de la Ciudad (pic). A former wasteground had been converted into a varied public space with a lake, bike paths, and Sustrans-style sculptures of animals made out of bits of useless old machinery, a fate my laptop had narrowly escaped. 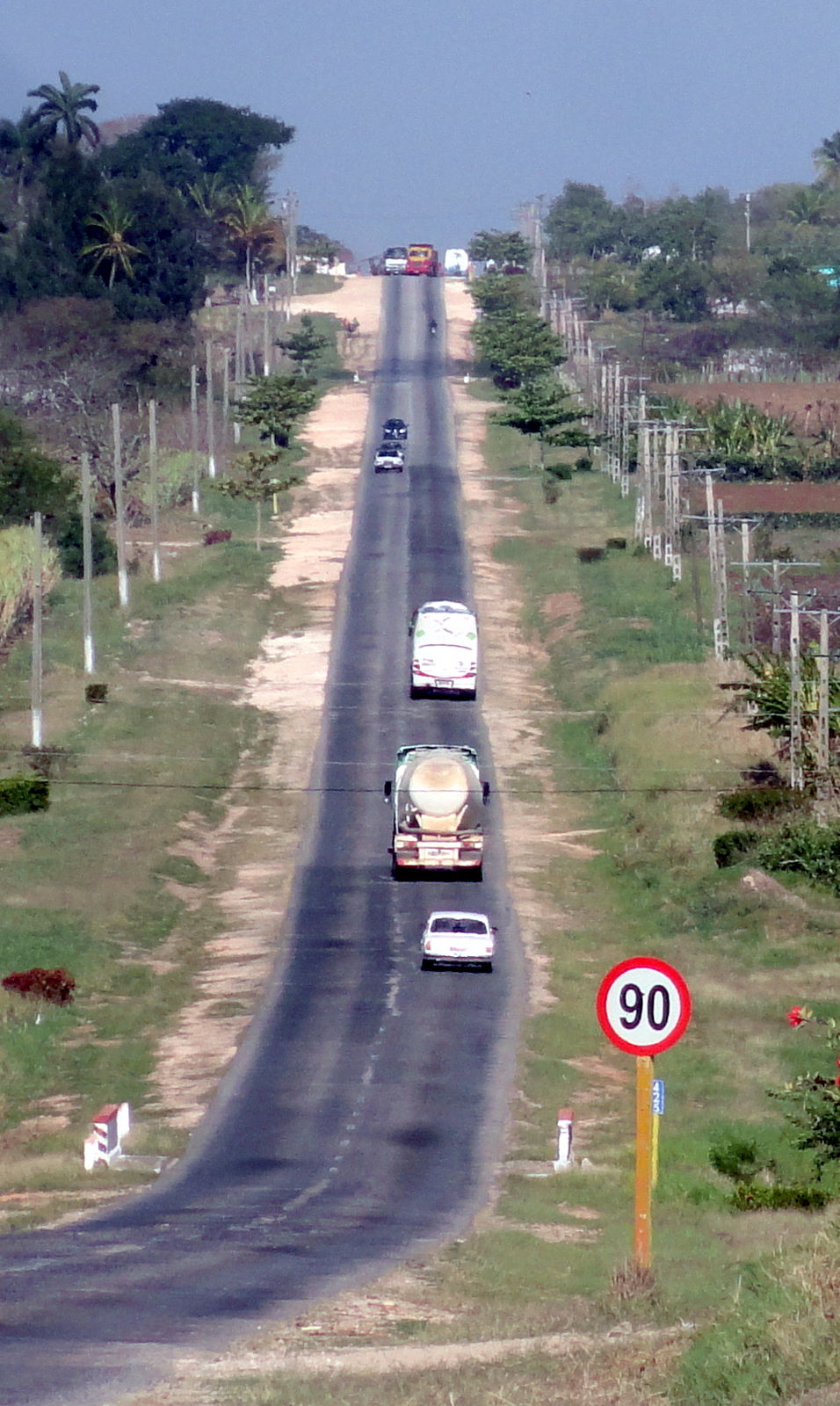 The cycling was just another day at the office (pic) on the Carretera Central.

It was pleasant enough, despite the occasional close encounter with Havana-bound lorries and the wearyingly straight roads.

After all, there was a tailwind, it was sunny and hot but not oppressive, and there were just enough roadside stalls with guarapo and roll-based snacks.

I pitched up in San(c)ti Spíritu(s) by half eleven: an agreeable place, with a splendid main square and some sort of book fest going on (pic). 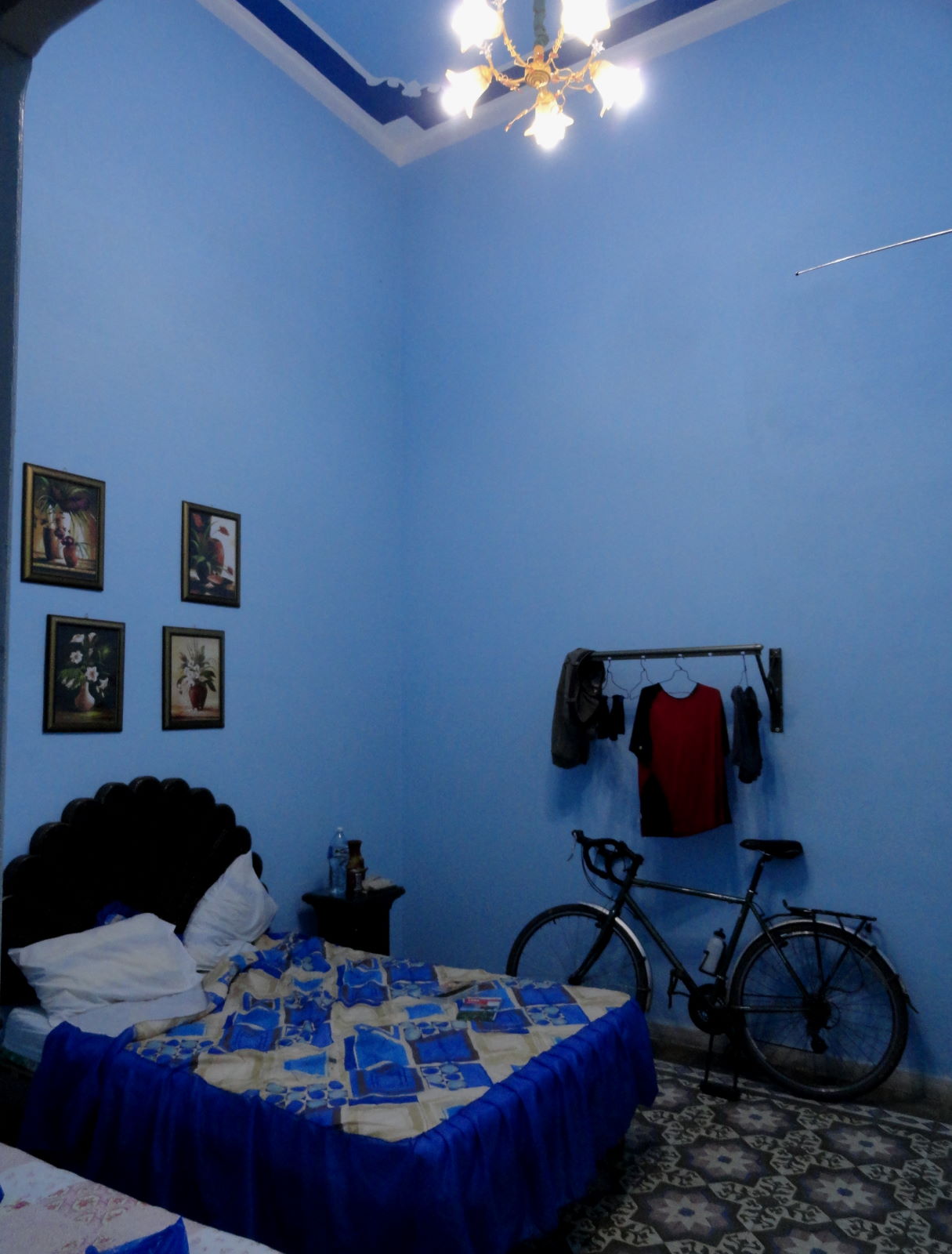 Last night’s casa hostess had fixed me up with a friend’s place in the centre: a very grand old colonial courtyard building, with rooms taller than they were long (pic) and twelve-foot-high doors. No problem storing the bike.

I needed to extend my visa, and bureaucracy demanded that I pay with special stamps available from banks.

However, the banks I tried in town just waved their hands, shrugged, frowned, and said they knew nothing, or didn’t have such obscure items, as if I’d asked to change South African rand into Vietnamese dong, small denomination notes only please. In any case, the inmigracion office was inexplicably shut. 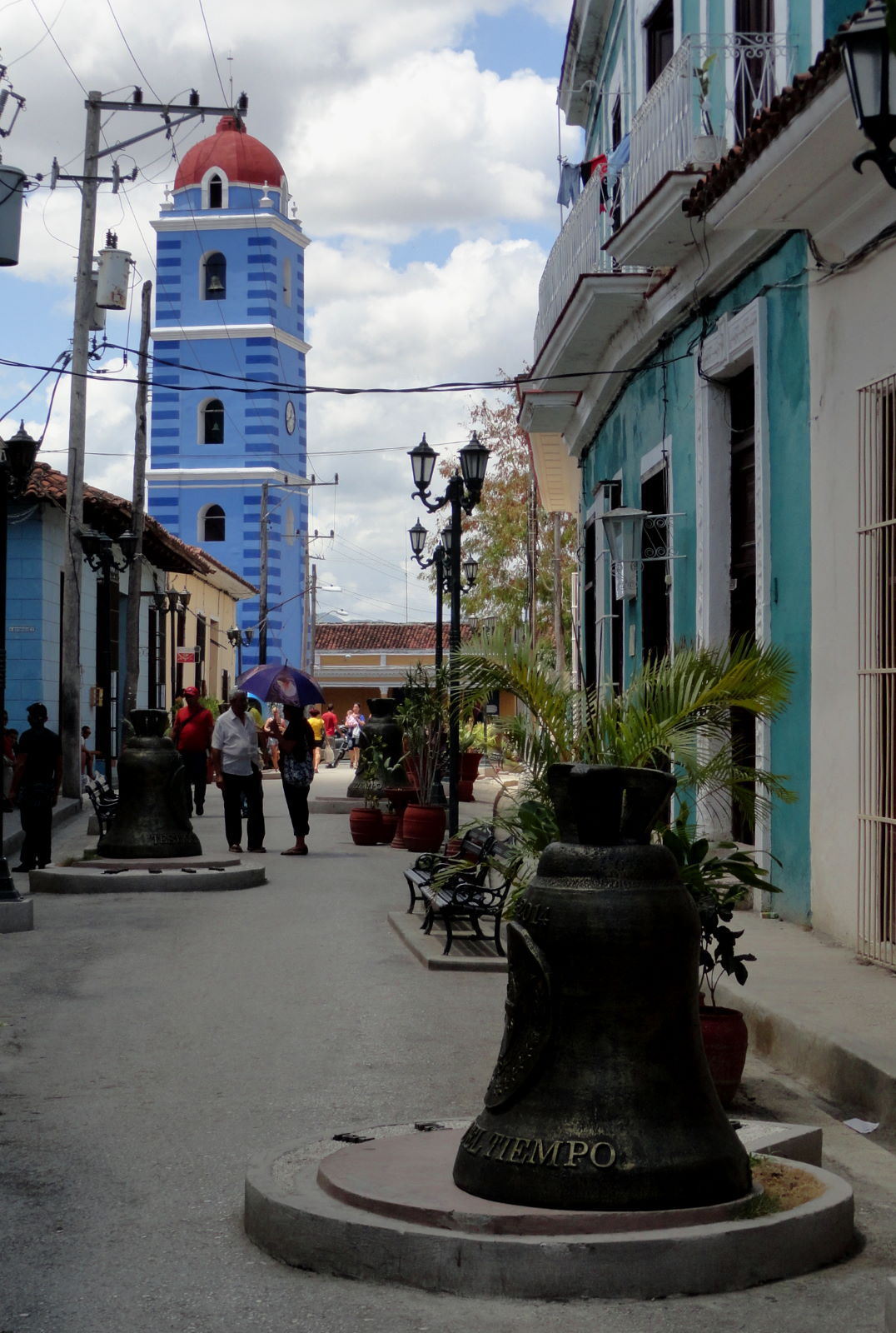 With the local internet kiosk out of action too, my mood plummeted a bit, despite a beer and burger in a no-nonsense bar in the historic centre (pic), and a Bucanero at the cheap’n’noisy El Rápido fast-food place overlooking the square.

Things got darker back at the casa, literally, with a power cut that plunged my windowless room into pitch black (not illustrated).

Yes, Rob, welcome to real life in Cuba. But in this country people tend to spring back. The power came back on after ten minutes, presumably thanks to the casa host, now bearing a satisfied look and a screwdriver. 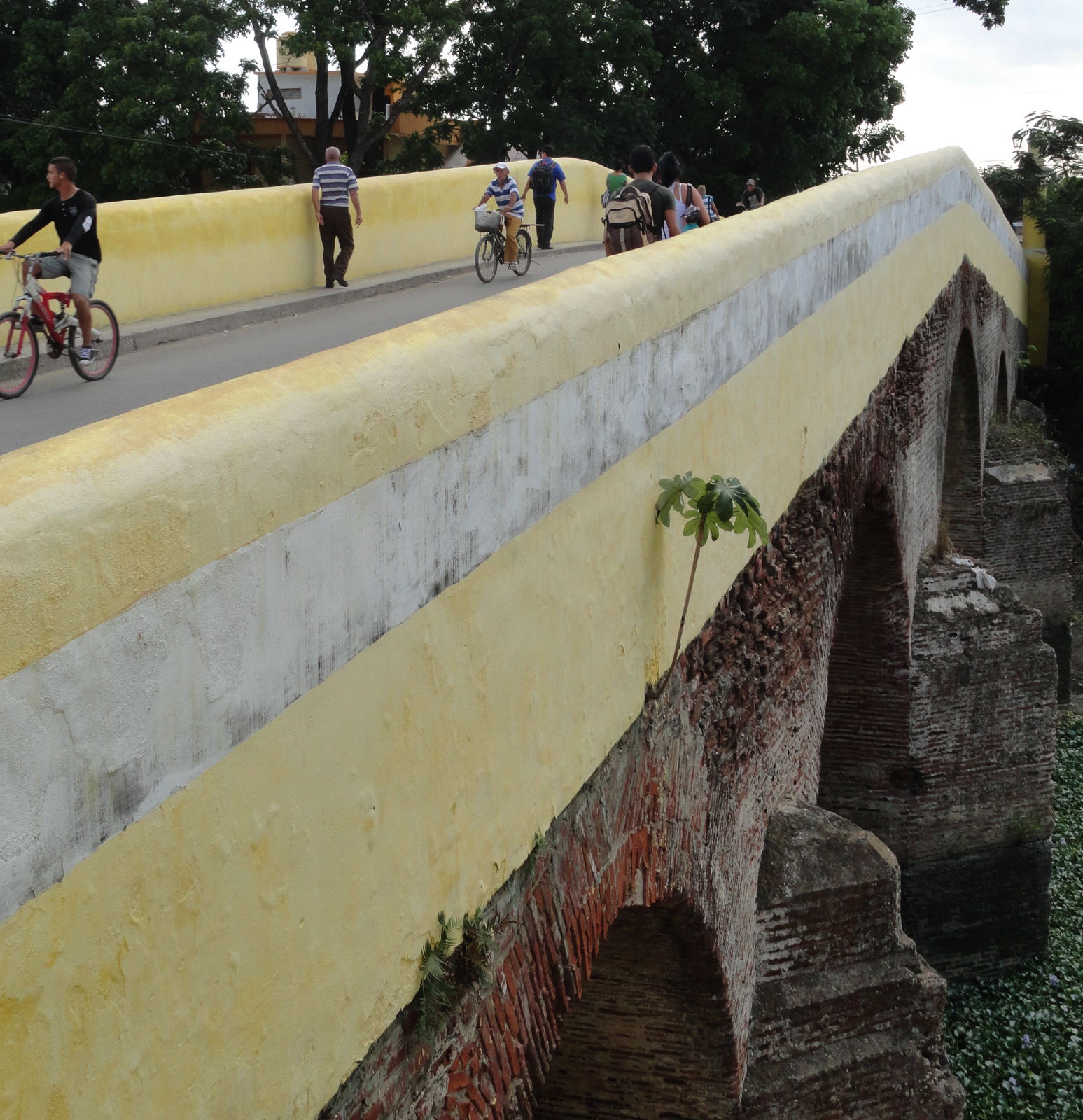 It all got good again. I walked out in balmy early evening and found internet at a computer games place, and reconnected with the world of email. I had a beer and pork steak with rice at a chirpy little restaurant decorated with pro-revolutionary flags and slogans.

And I strolled down to a bridge which the guidebook said ‘wouldn’t look out of place in Yorkshire, England’ (pic). 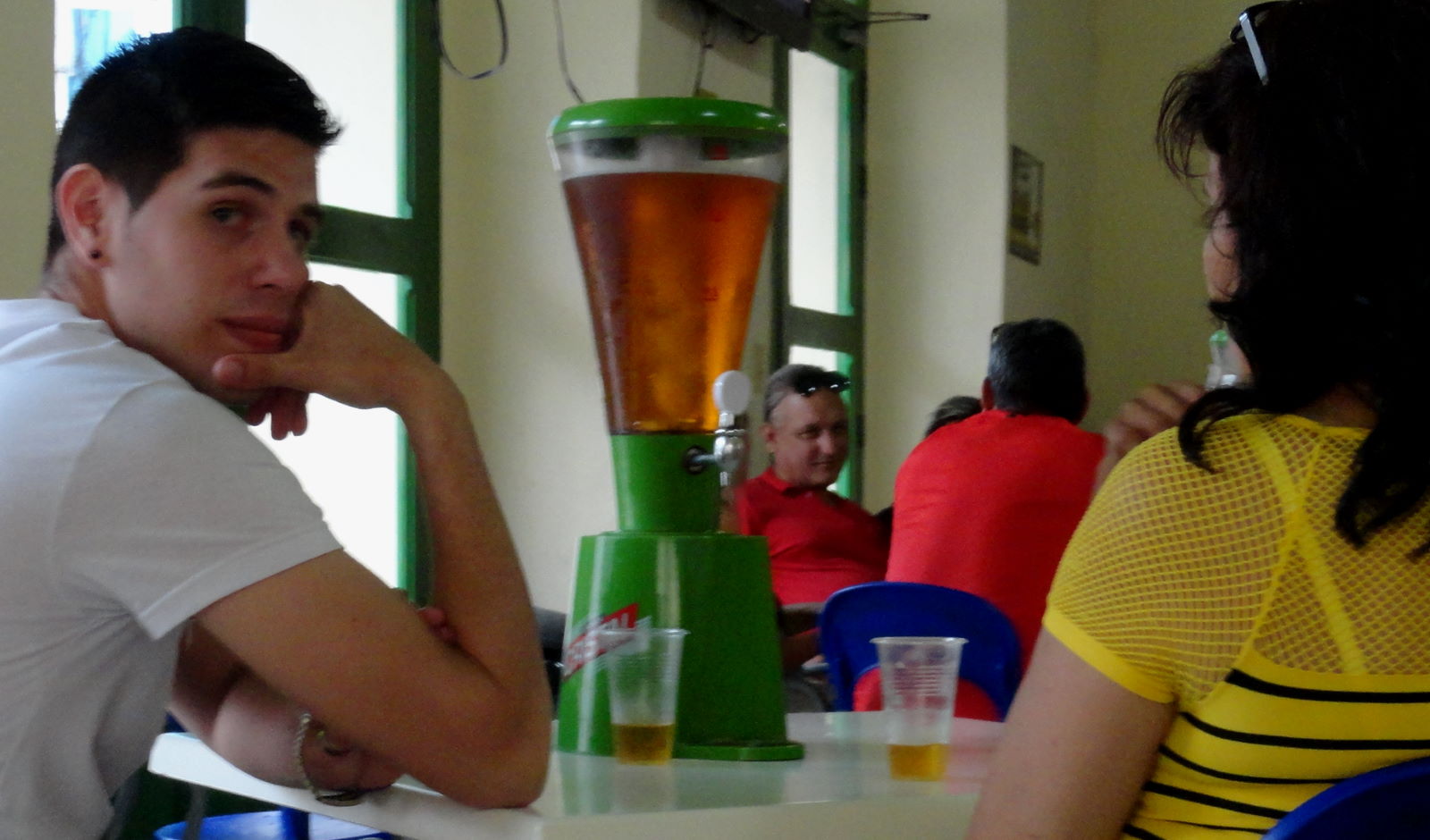 Hmm. Maybe, though not much else reminded me of Ilkley or Bridlington. I happily nosed round the cobbled back streets, local-watching, and had a beer in a little bar. The at-table beer-tower (pic) is a Latin American thing, although I thought it might be a bit ambitious for me to have one to myself.

Back in the centre I found the Casa de Trova music club, and while waiting for the performers to arrive, I thought I ought to try a Cuban cigar. The bartender happily organised a salesman friend to flog me a luxury one: I comically bargained him down from $5 to $3, still a ludicrously high tourist-price, especially as, er, I don’t even smoke.

It was smooth, rich and aromatic. It made my head spin like the washing machine that came with my house in York, in other words not at all, as it was broken. I coughed and spluttered and decided that, like Concorde, this had been an experiment well worth making, albeit mightily expensive, and best left to history.

(The remaining two-thirds came back home with me in its tin fuselage and ended up in the worm bin. I’m sure I could hear them coughing.) 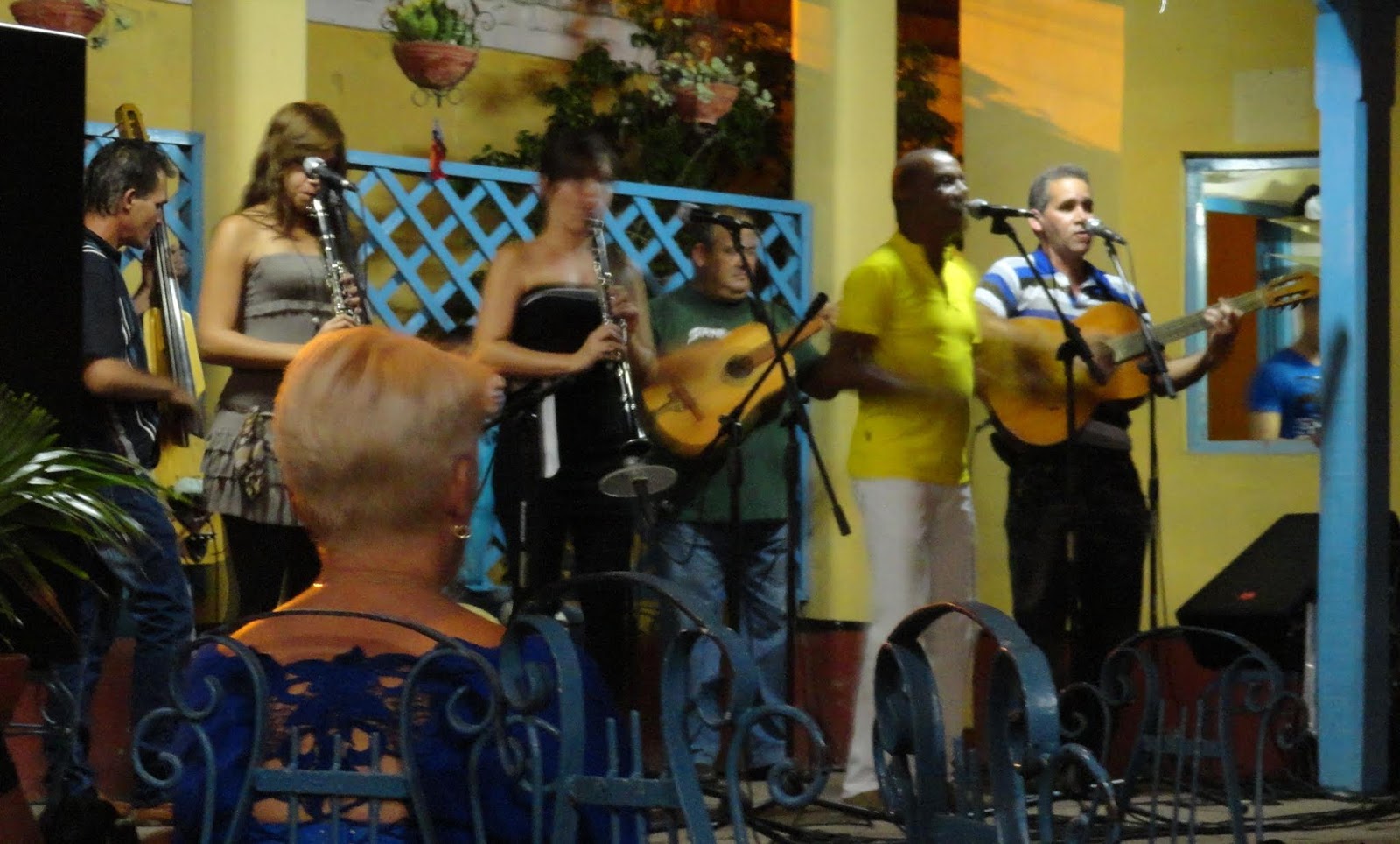 Ah, but the music! When it started around ten, it was excellent. First up were my favourite of the two bands, a septet (pic): two guitars, two clarinets, two percussion and bass, all of them singing, all very good musicians, perky Cuban son.

The warm fuzzy courtyard gradually filled up with locals that wouldn’t have looked out of place in any well-to-do Latin American town venue. The second band, a guitar’n’vocal three-piece, did popular songs that were more popular with the audience than me.

So around half eleven I ambled home, via a final snack and beer, having totally forgotten the day’s earlier challenges of… hang on, what were they? Something about a laptop? Visa hassles? Don’t know don’t care. ¡Estoy en Cuba!