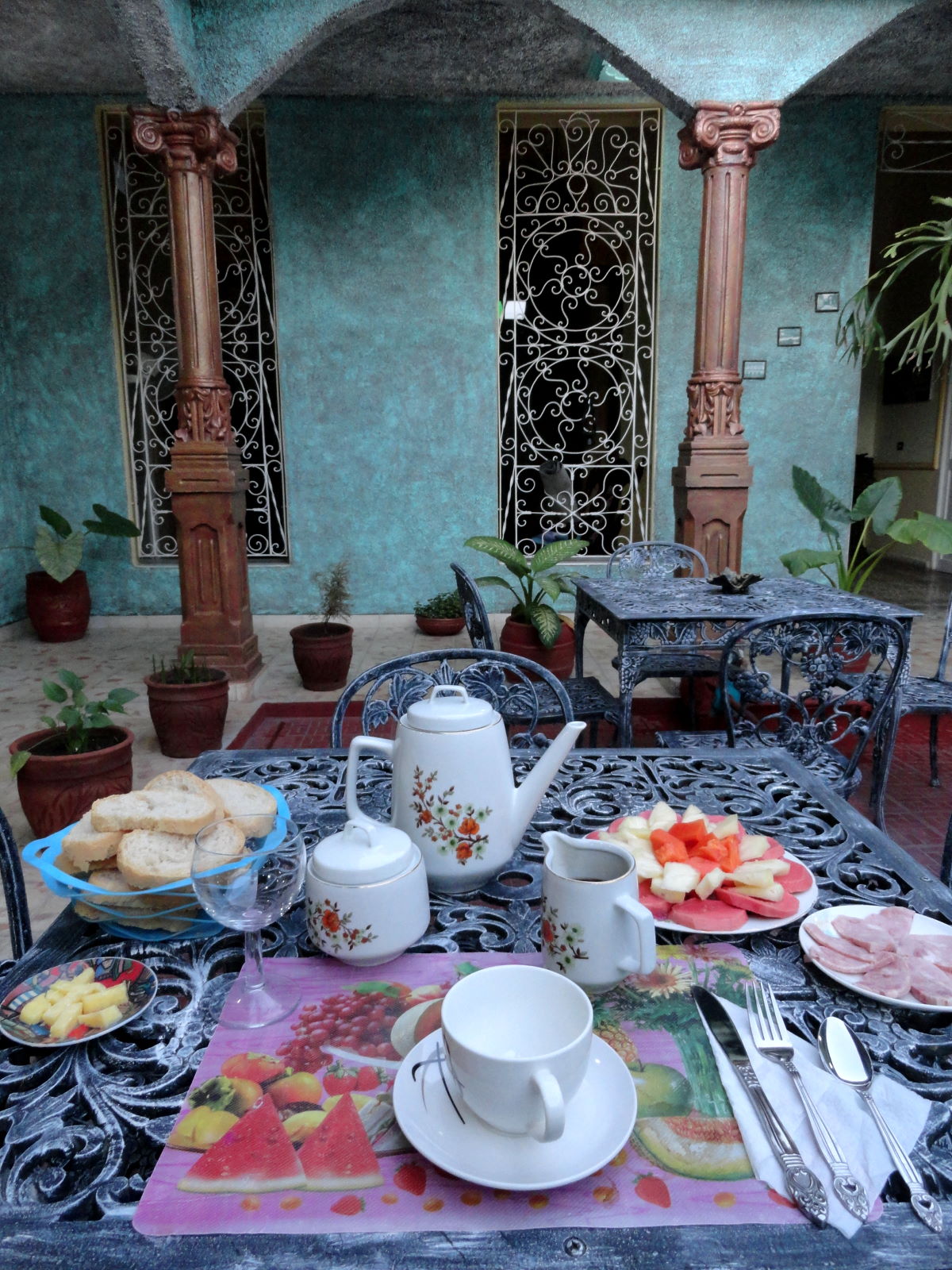 I had the casa’s grand courtyard all to myself for my splendid breakfast (pic).

With Vitamin C requirements for the coming week satisfied, I set off through the waking dawn streets, across that Yorkshire Bridge, to join the main road to Trinidad. 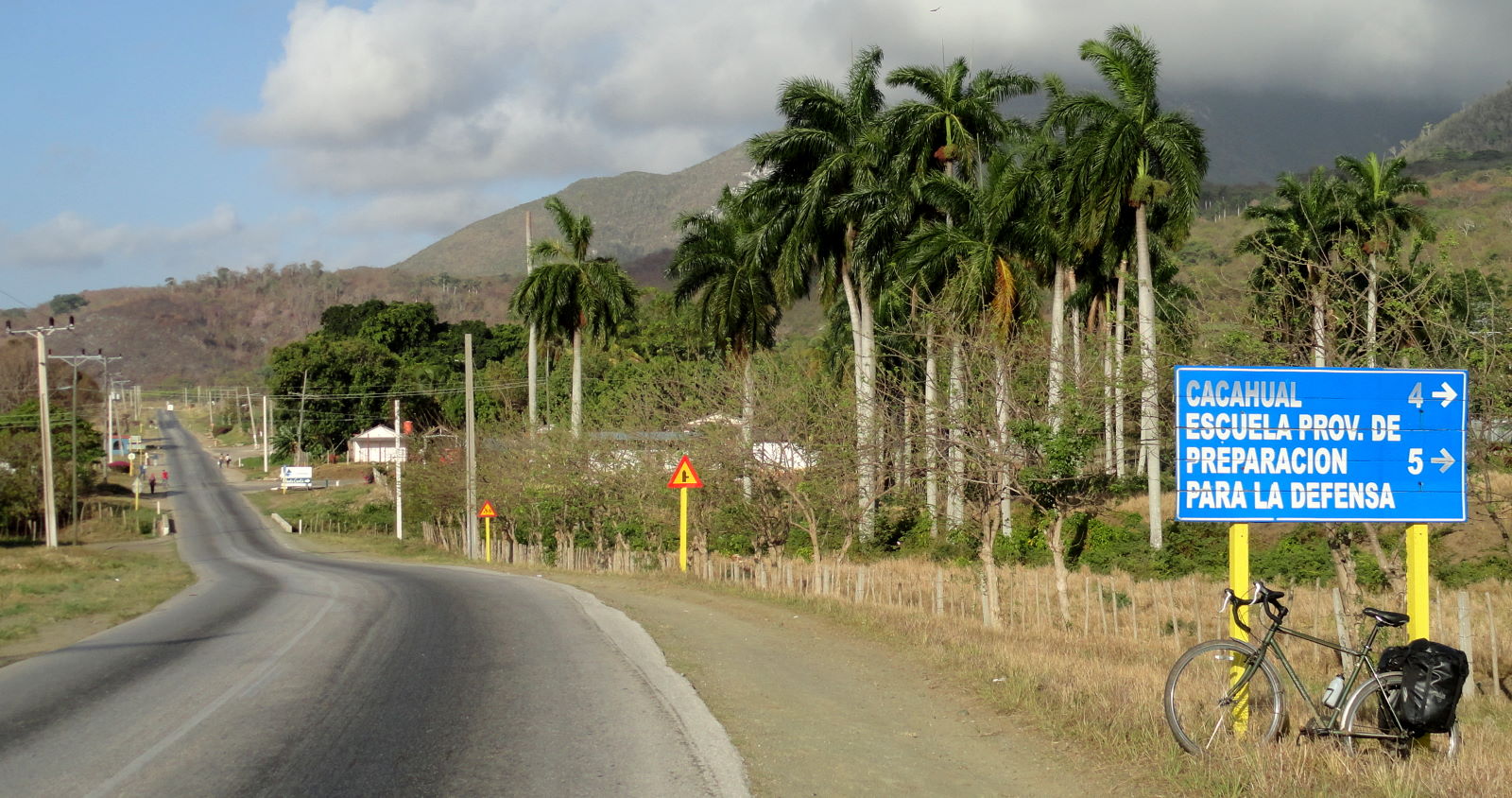 It was lovely cycling (pic). After the previous few days of rather perfunctory flat distance-making, I got some scenery at last, fulfilling the promise of the green-line road on the map. Hills, mountain backdrops, lush greenery. Easy climbs and delightful freewheels with good visibility, straight roads and little traffic. Pleasant little villages with refreshment kiosks, such as the lively little Saturday morning place of Banao.

There was even a tourist photostop: Torre de Iznaga (pic), the former watchtower of an old sugar plantation owner. Now, it’s easy to get the impression that the slave trade was some vast, evil empire used by the white European establishment to exploit and oppress black Africans. Well, that’s because it was. But today Iznaga Tower is a tourist tick-box, and I intended to tick it.

I climbed to the top with the coach parties to enjoy the view (pic). After nearly two weeks of being the only non-Cuban in the room or the street, I was suddenly the darkest-skinned person photobombing their selfies, thanks to twelve days’ accumulated suntan. 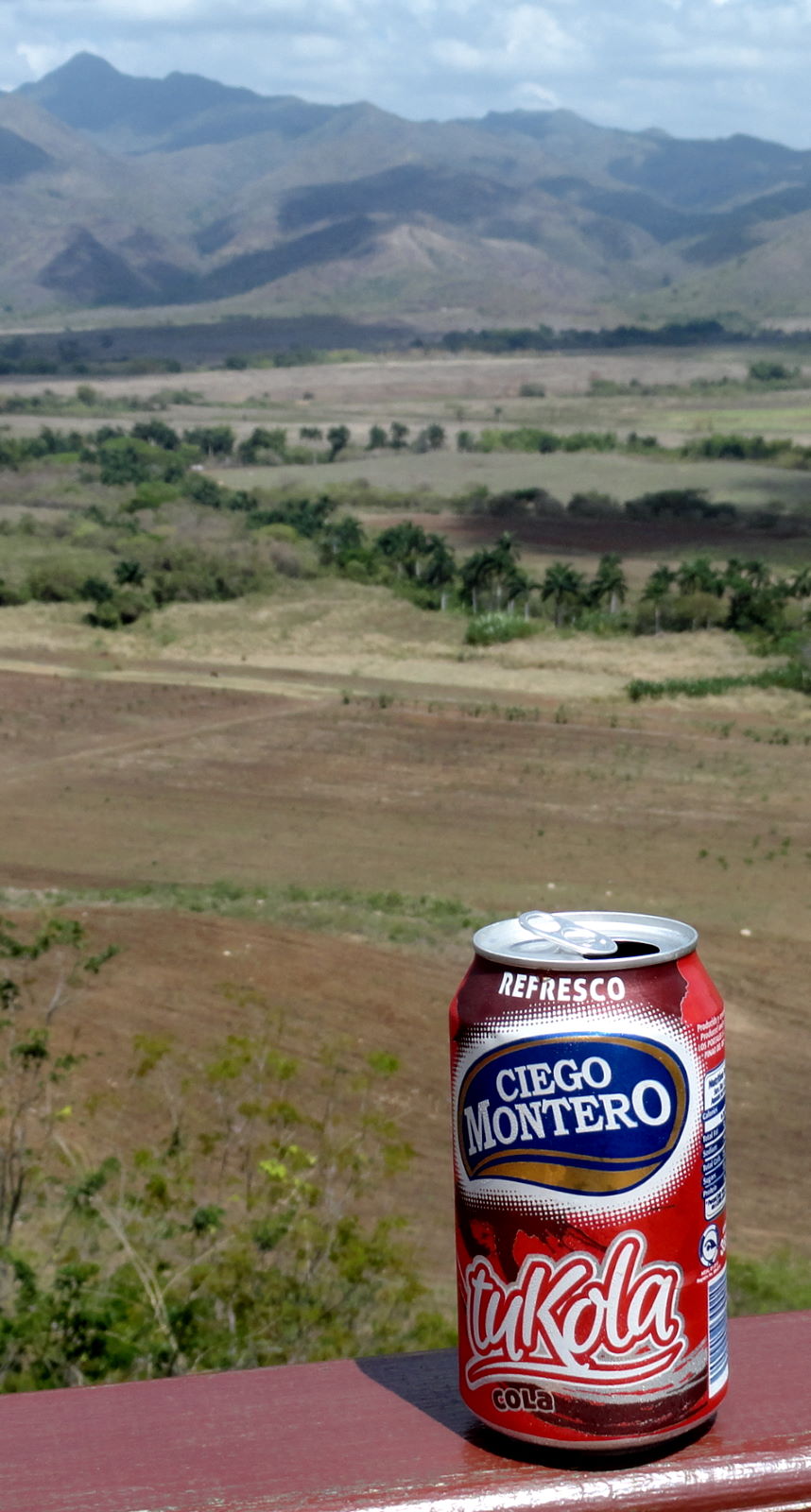 Just outside the approach to Trinidad was a pricey mirador bar. I admired the view here too, but we were now within tourist radius of Havana, with prices to match: $1.50 for a coke (pic).

But I was thirsty. I swallowed my pride. And the coke.

I was in Trinidad just after midday, but my first hour and a half there was a hot, bothersome challenge. Time to extend my tourist visa was running out, and I slogged between tourist agencies and information booths to see how it could be done.

I hadn’t bargained for the cobbled streets, which meant lots of bumpy pushing of a laden bike in blazing heat. 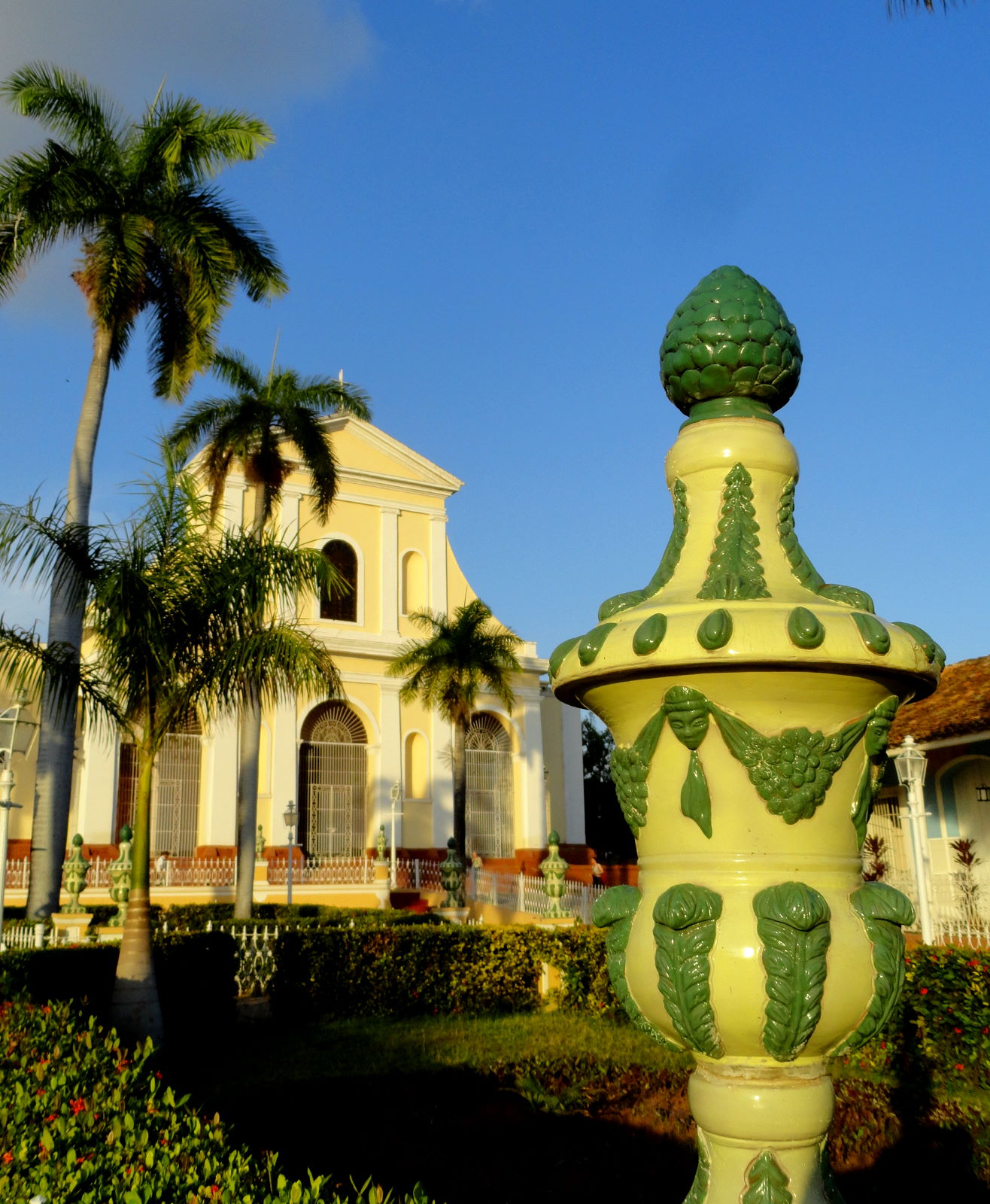 I found that I’d have to stay till Monday morning, when the visa office would reopen.

I would be marooned in a tourist honeypot famous for its colourfully restored colonial buildings (pic) and guest-friendly music, restaurants and bars.

OK. Sometimes you have to take the rough the smooth, as anyone who’s done a Sustrans route can tell you. 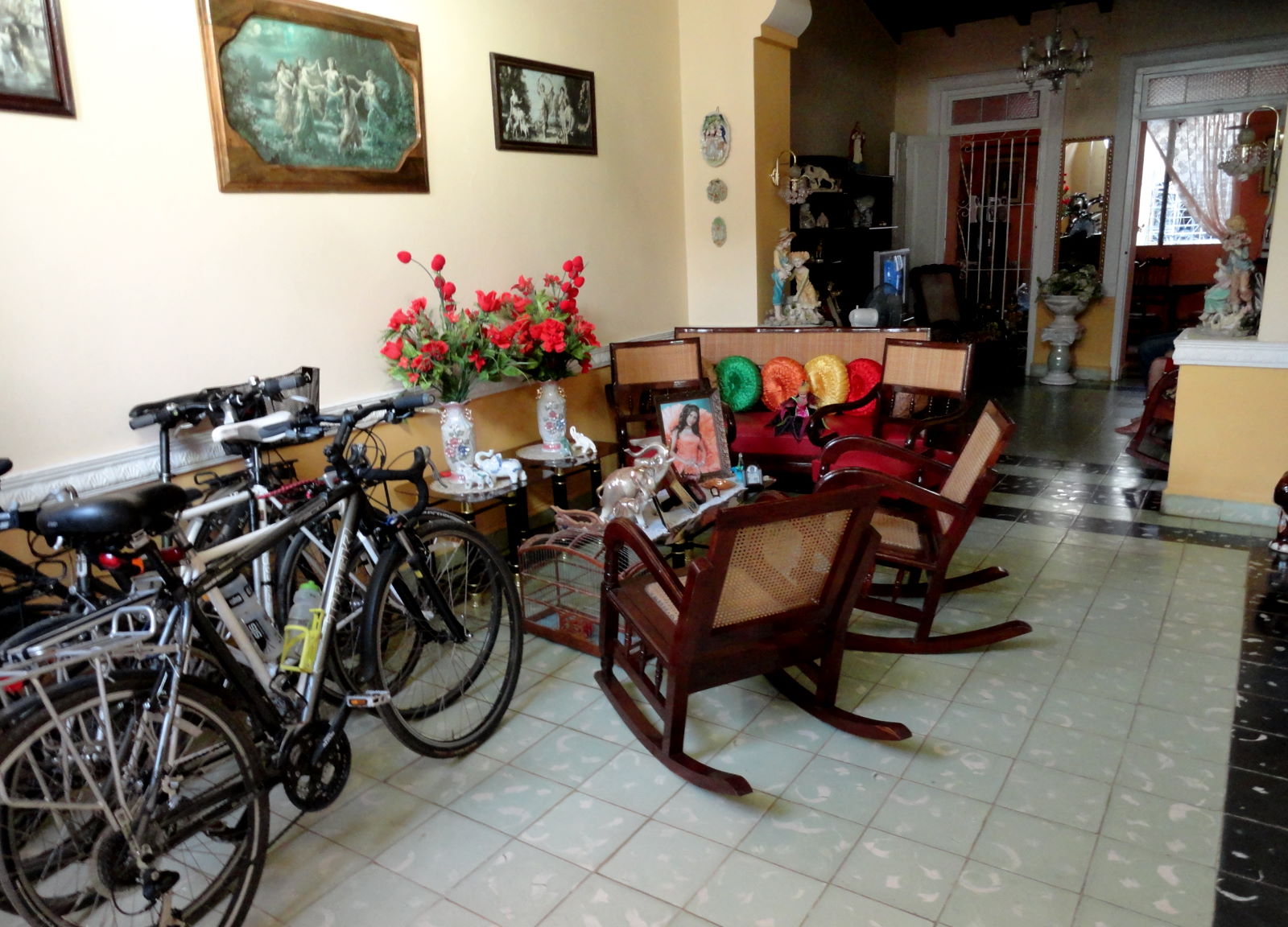 So I checked into a casa (pic) recommended by Janet, my hostess back in Ciego de Ávila, for two nights. I had the customary large double room with ancient furnishings and private bathroom. I hung out my laundry on the terrace and admired the rooftop view of the historic town centre.

The Plaza Mayor was deserted in the mid-afternoon heat (pic): ah, no bars here. I found little in the art gallery to detain me, either. I was the only customer in a restaurant on the virtually silent main drag, and tret myself to a $9 lobster dinner, the best so far.

I put my nose into the Iberosol hotel, but it was full of middle-class middle-aged middling-looking European couples.

Not the experience I was after. If I want to see a middle-class middle-aged middling-looking European I can look in a mirror. I was happy to find a more chaotic, more vibrant, edgier local bar in a side-street, with young and old Cubans getting on famously. I had a couple of pre-siesta beers there instead. 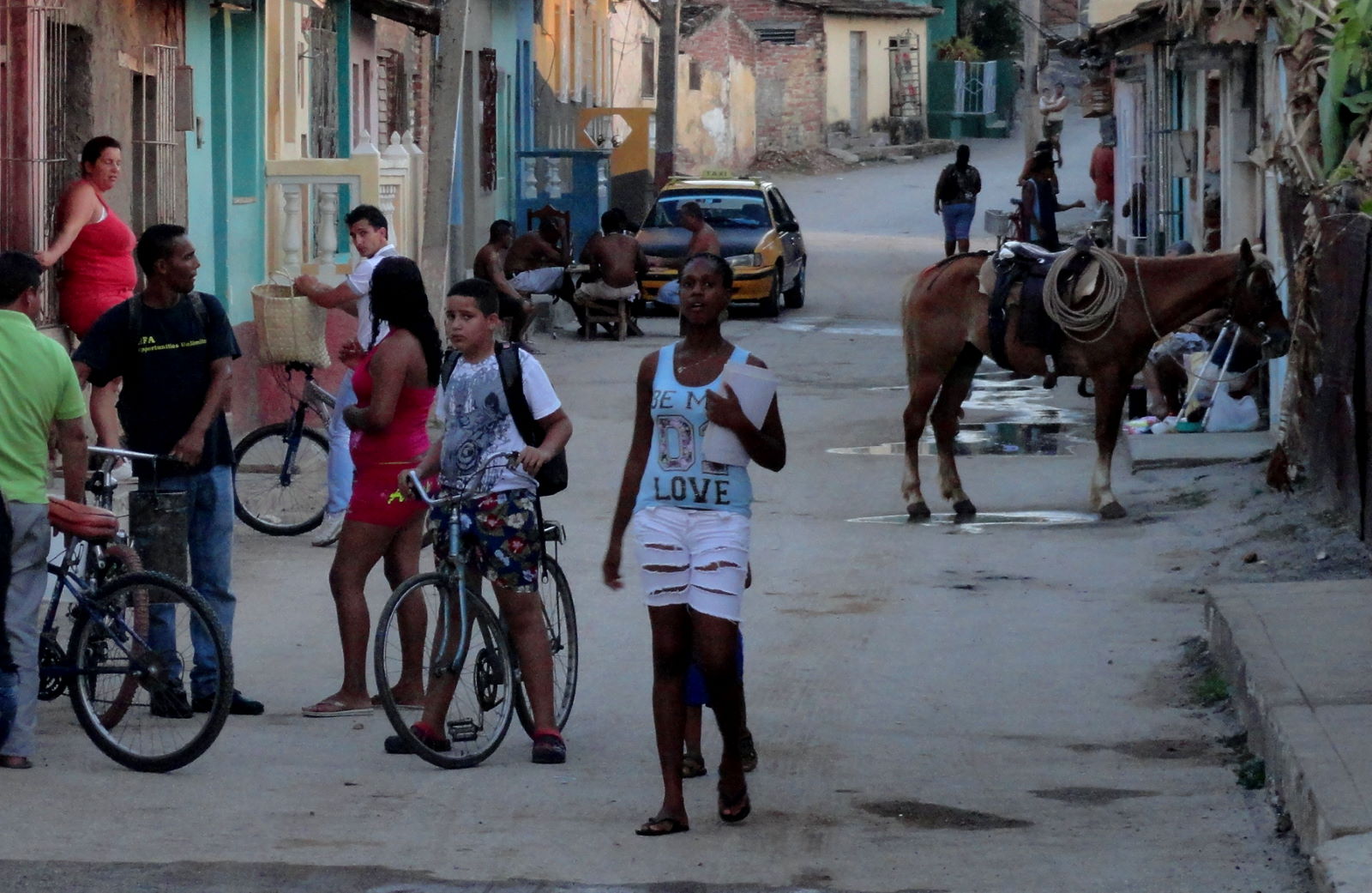 In the evening I did the guidebook’s recommended photo-walk. I got some nice snaps, but I was happiest just wandering through the back streets, watching life (pic). It was a couple of hundred yards away from the tourist ground zero, but light years different. Everybody was out sat on doorsteps, mending cars or bikes or horses, playing baseball or football, chatting, strolling.

Doors were open and their modest houses were entirely on view, the family sitting round the dinner table, kids doing homework, old telly showing the Isla de la Juventud—Ciego d’Avila game. ‘Poor but happy’: yes, the tourist’s trope, the dinner-party cliche of the teleported western visitor… but that’s how it seemed. It was all feelgood stuff. 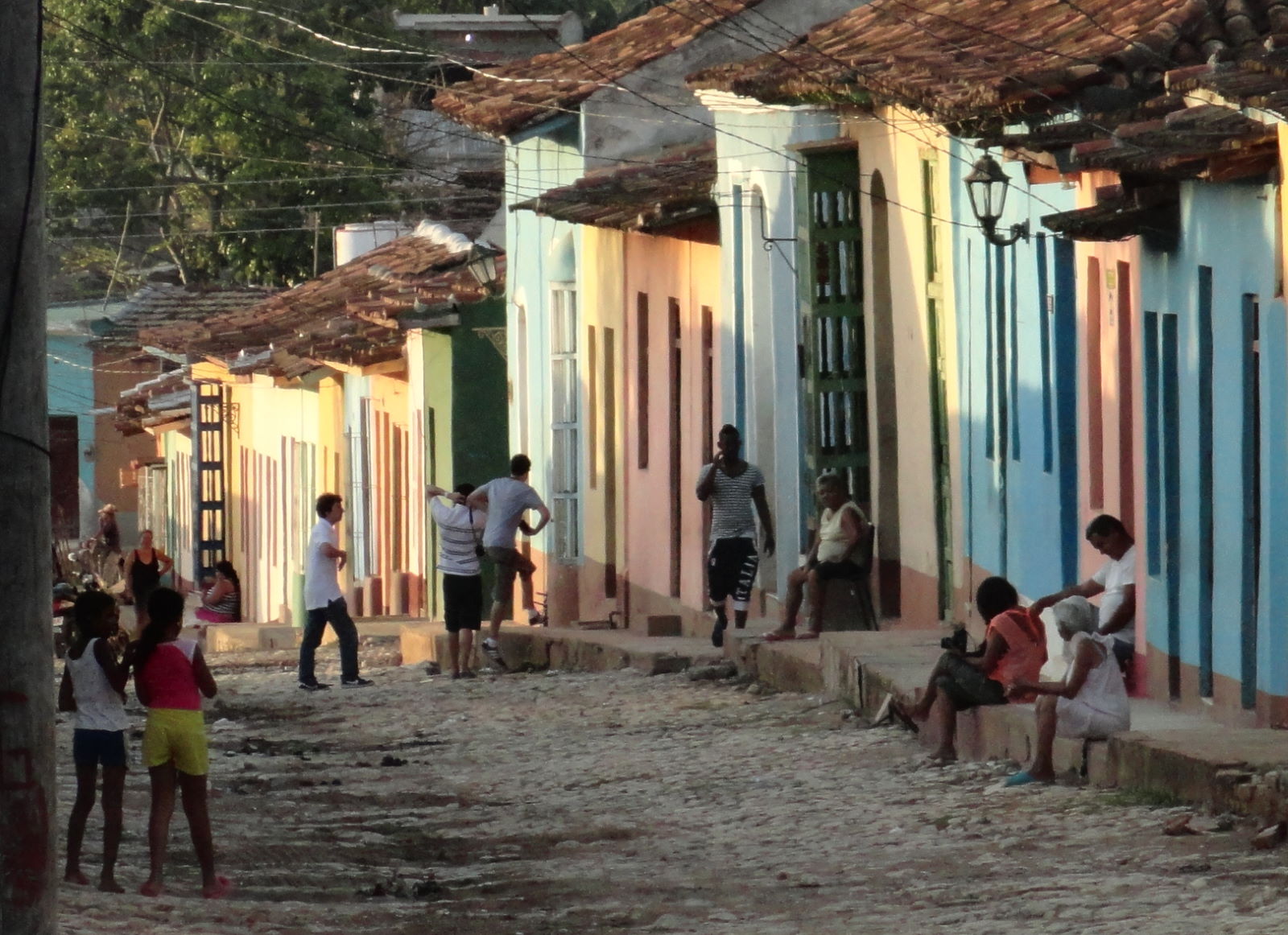 I got lost (pic), but was given friendly directions, unprompted, from one guy. Not a hustler, not looking for a kickback, no them-and-us, just helping. We joked about the baseball game.

Back at the casa I chatted over dinner and a beer to some amusing thirtysomething English bike tourists. We swopped notes about cycling, drank, laughed. I realised how much I’d missed English culture, English banter, English humour. 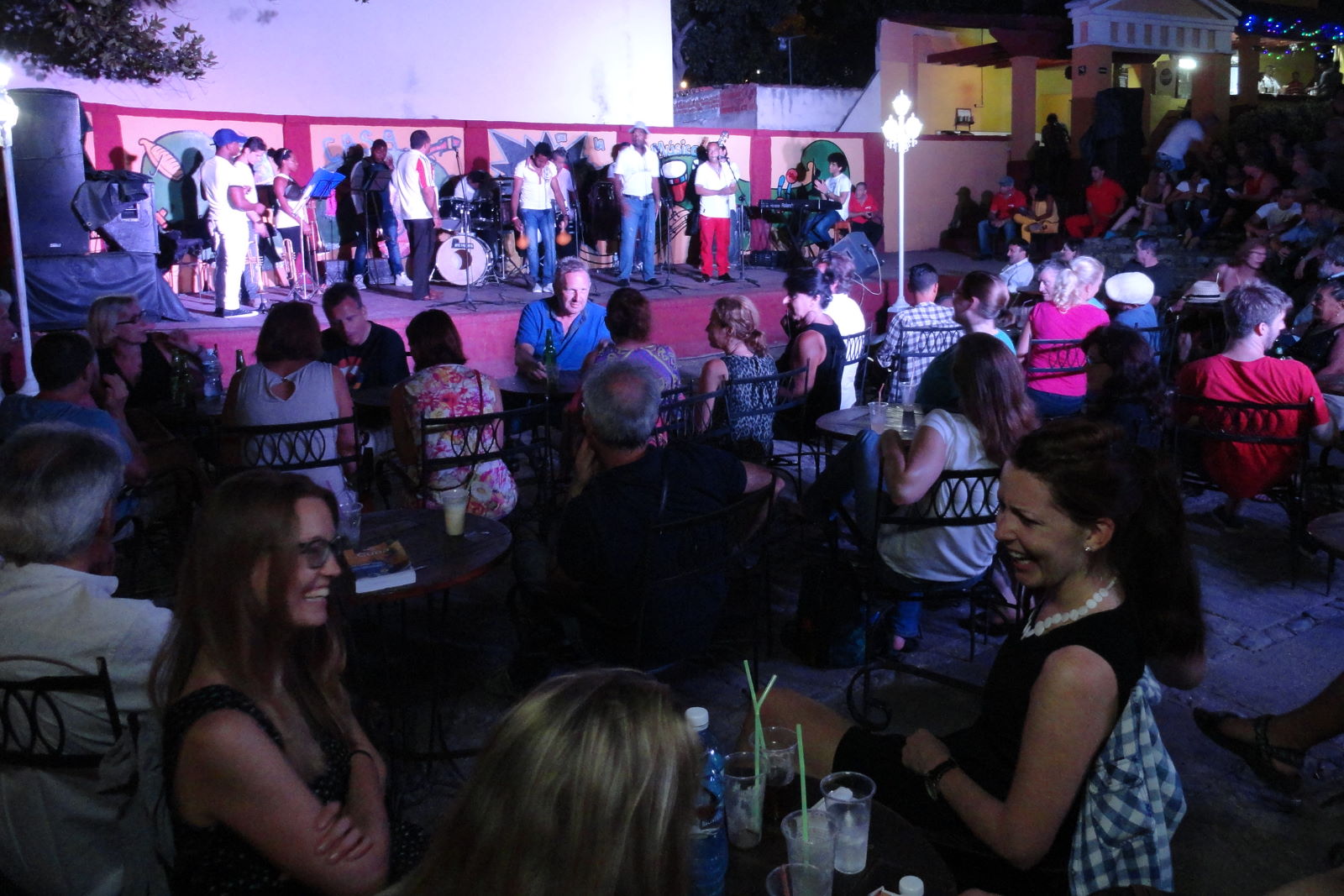 Finally, about half nine, I got out to the Plaza de la Musica to see the outdoor salsa band (pic), and watched the slinky locals and less slinky tourists doing their dance moves. It was packed, every pavement restaurant table taken, every step sat on.

A lovely atmosphere; a signature experience of Trinidad; I’m glad I came to see it. But, well, a bit contrived, a bit touristy. Already my pedalling feet were itching. I’ll be happy to move on come Monday morning.