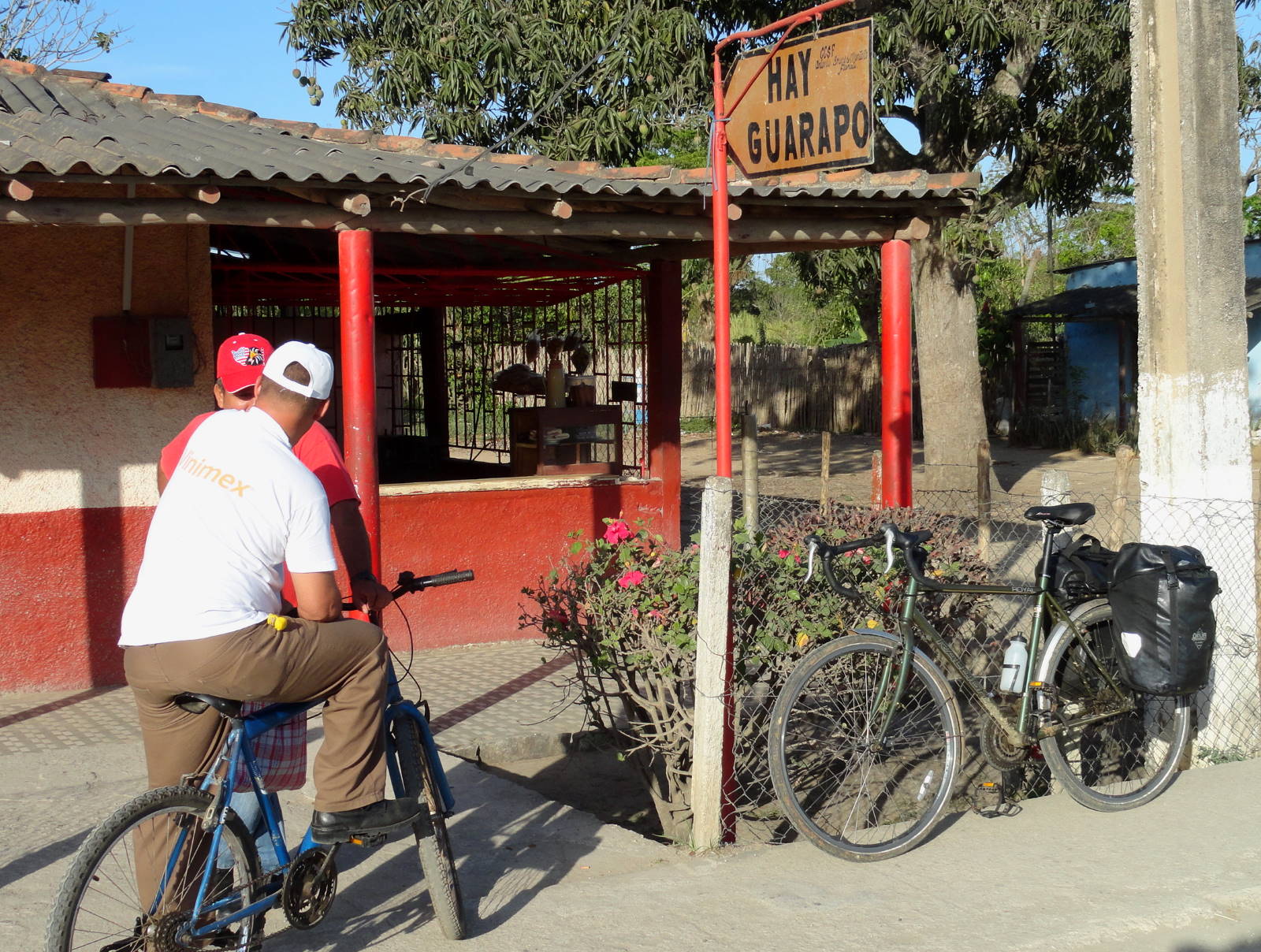 Another long but lovely sunny day of mile-eating on the Carretera Central, and fruit-juice-drinking at kiosks en route (pic) to ensure my five a day. Their menus now include guarapo (sugar cane) and pineapple juice, and it doesn’t come out of bottles.

The guarapo is not lumbered with many food miles. Food feet, more like. Life in Cuba can be attractively simple, the whole production process visible there in front of you: you ride past fields full of the stuff growing, see guys hacking it with machetes, dodge lorries carting it to the next town. 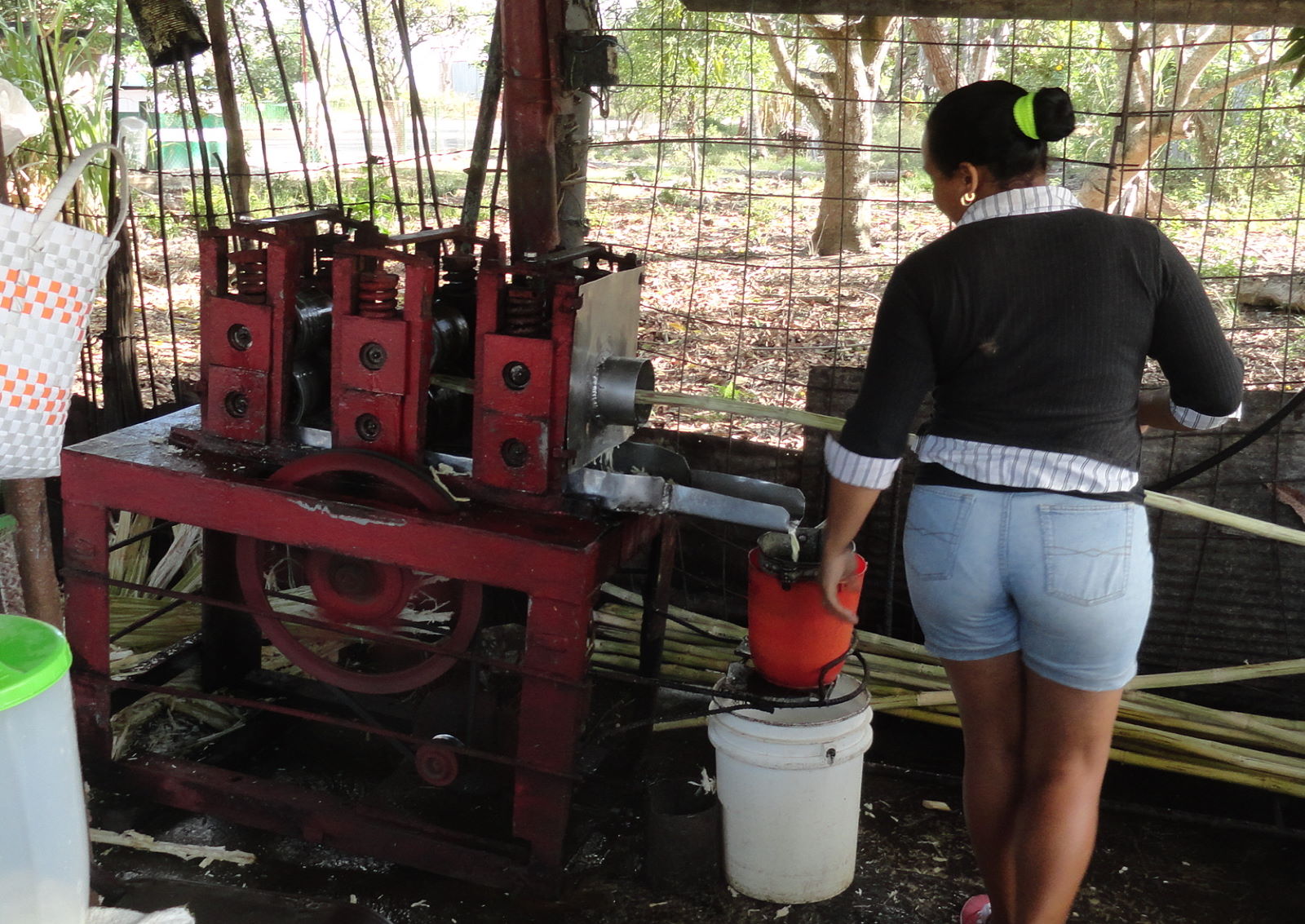 Some of the canes don’t even make it onto a truck: they’re piled up outside kiosks and fed into a pulper with dramatically exposed cogs, like some Victorian milling machine perilously maintained by scurrying children (pic). The fresh, sweet, delicious guarapo trickles directly into your cup ready for swigging. No preservatives, no pasteurisation (and in all my time in Cuba I had no tummy problems, either).

The tarmac was mostly empty, straight, flat – and bumpy (pic). I had a cheap pasta lunch and a few fruit cordials in a rough little village where the men were sparring clumsily with each other. Evidently there was little else to do round here.

Perhaps just as well they didn’t have machetes, as the blokes working in the sugar cane fields did. In some parts of the world I might fear for my safety, being surrounded by knife-toting gangs: they must know that as a western cycle tourist I’ve probably got cash on me equivalent to their life savings. But this is Cuba. I was sure the only way those blades would be used in anger would be against anyone who tried to steal my bike. 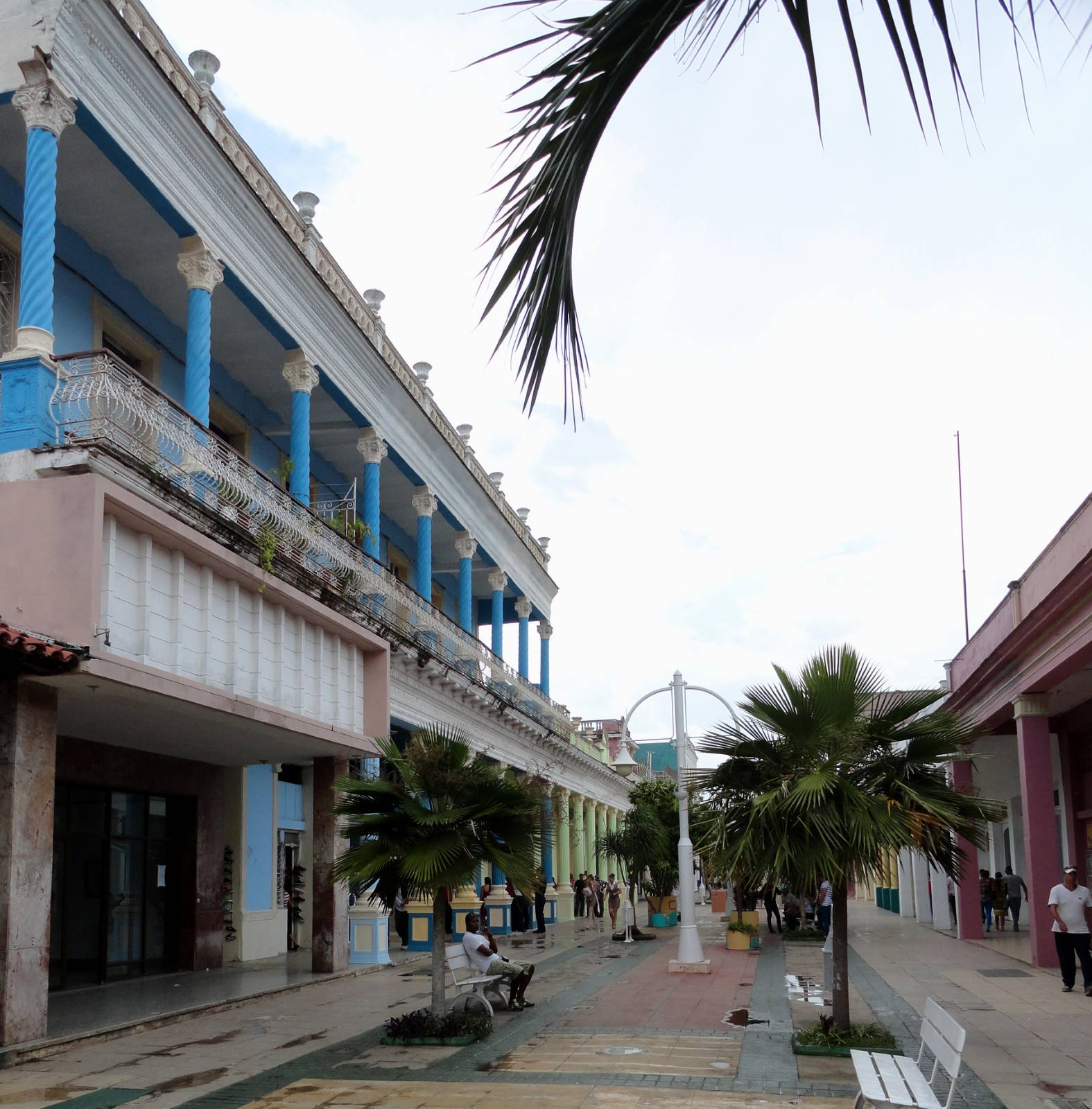 I got into Ciego de Ávila about half one (pic).

As often happens on this trip, my intended casa was full, but they put me frictionlessly in contact with another, right in the centre of town near the main square of Martí.

A pleasantly chatty woman showed me in and my bike was stowed in the central courtyard, so the knife-toting vigilantes could relax. 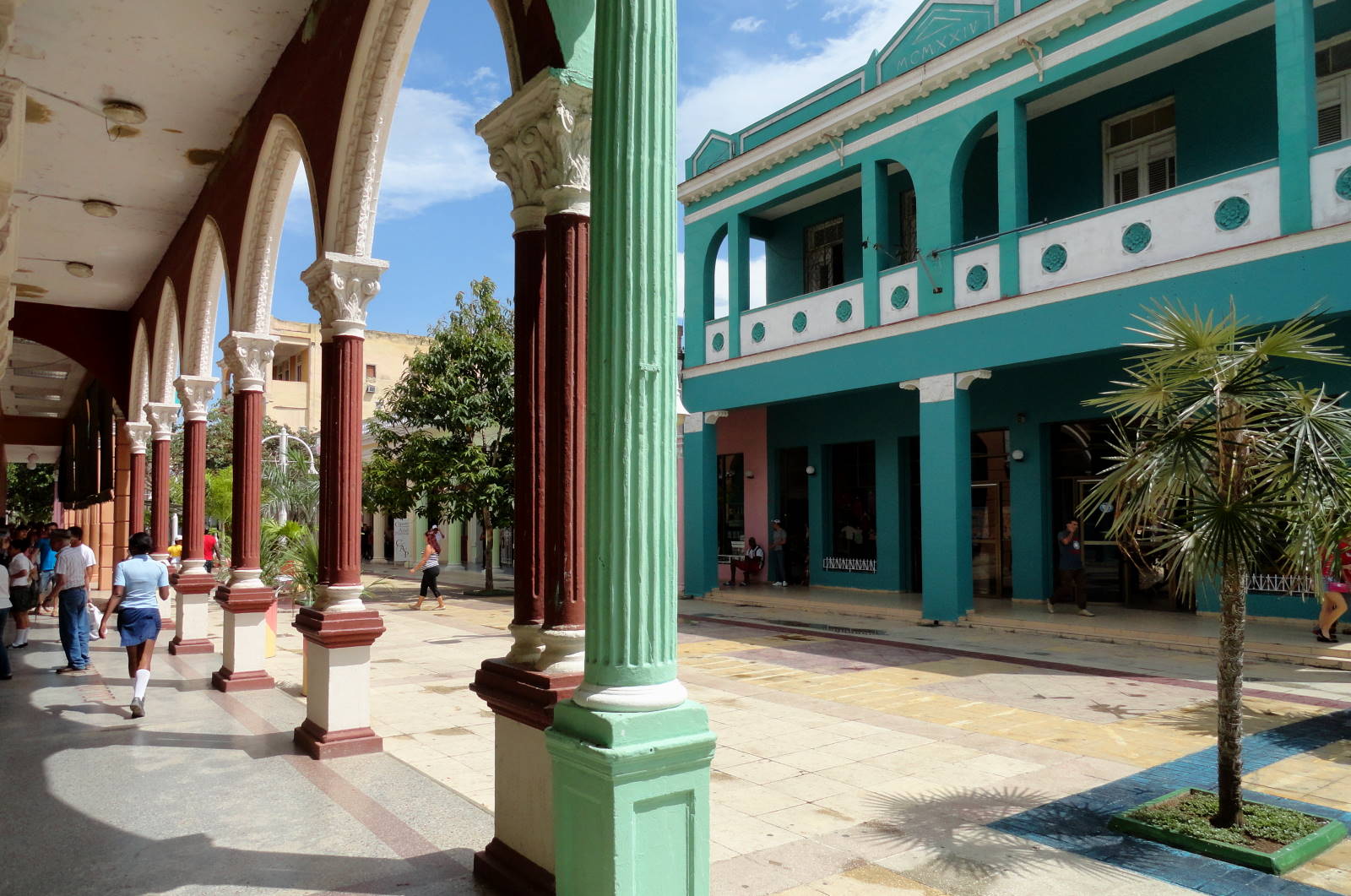 I liked Ciego. It was bright, lively, compact and discoverable, with lots of colonnades (pic) and a freshly painted, colourful pedestrian street, Independencia. 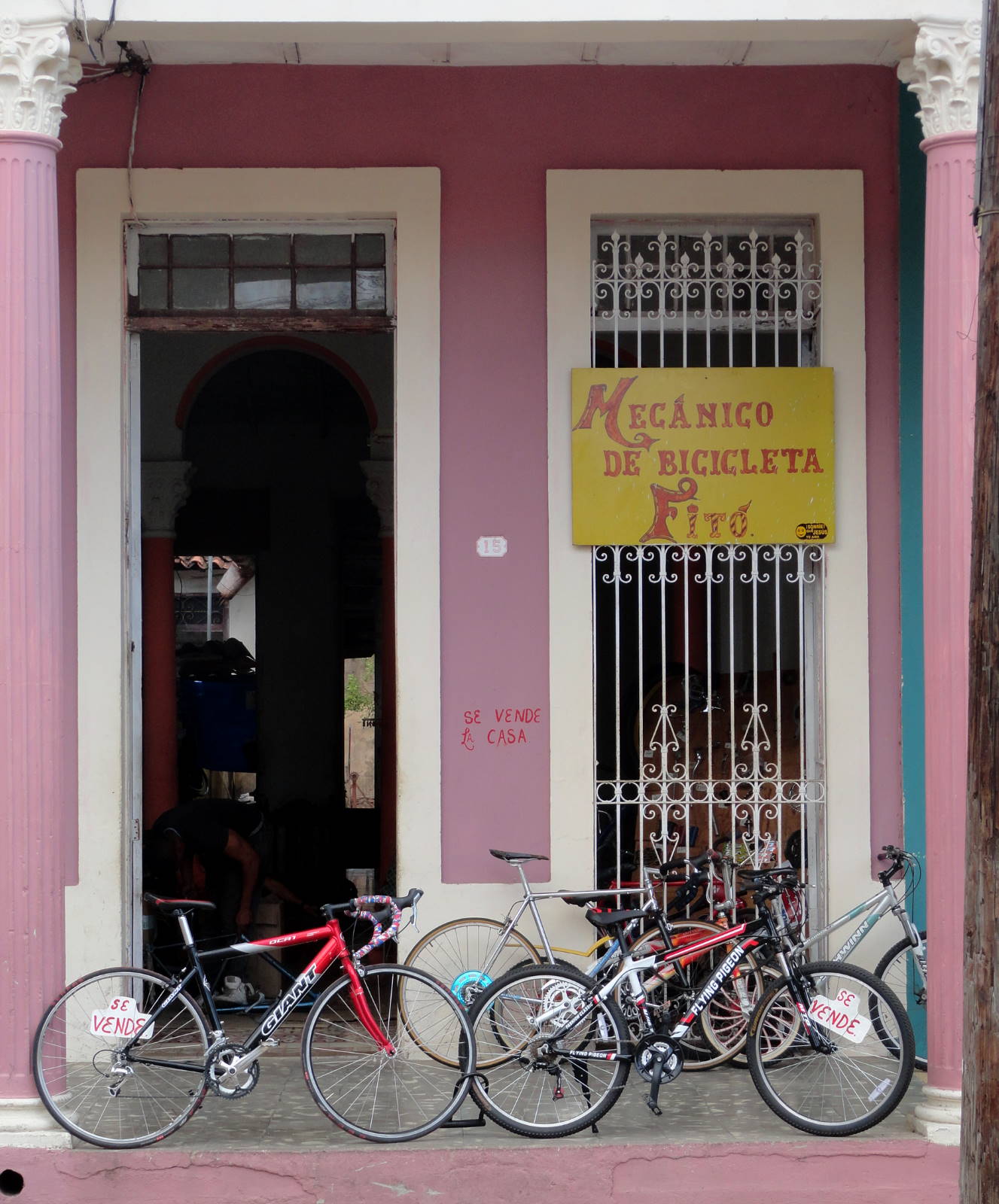 There was a bike shop (pic), naturally.

It was nice to know that, should any disaster befall the bike, a replacement spare part could be ordered, and I’d then have the excuse to spend a week waiting for it to be shipped from Taiwan.

Or, if the worst came to the worst, a mechanic would weld me one up on the spot and charge me 50p.

Sadly there was no music at the Casa la Trova, but I stopped to admire another Cuban cultural strength: the chess club (pic). It was enjoyable to watch but not much good for my Spanish, as nobody uttered a word in the twenty minutes I was there. Which, for many players, is presumably the point. 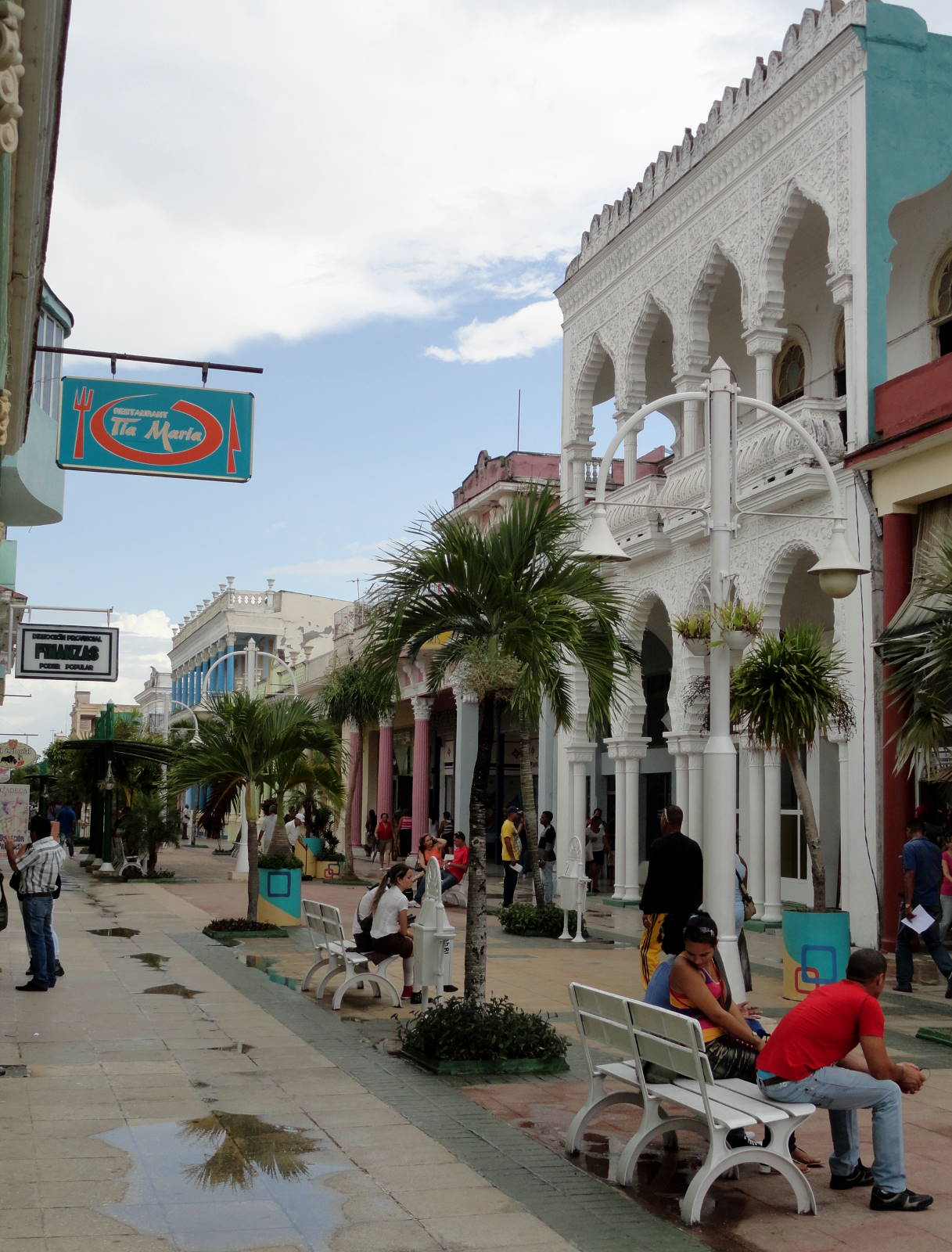 Rather better for language practice was my couple of beers and burger at El Rápido, which was doing good business.

There were evidently plenty of Ciegans happy to pay top whack (ie $1.50) for a dinner out in this relatively well-to-do town (pic).

My discovery of the week, guarapo aside, is the ice-cream ‘chain’ Coppelia. This one was buzzing (pic): it took half an hour to get served. Granted, Cuban service is rarely rápido, but this was down to the long queue rather than contempt for customers. Soviet-era Russia has influenced Cuba in some ways, but not all.

I ordered the house special, the Three Graces. My shop Spanish clearly isn’t quite as good as I thought: I ended up with three of them, making nine portions altogether. And instead of an affordable 5p it was a shocking 16p.

I scoffed the lot of course. I’d done over seventy miles, after all.