Today was the most enjoyable day so far in terms of pure cycling: a straight, flat, delightful wind-assisted slide through agricultural landscapes.

Casa breakfasts can be substantial. My two fried eggs, ham, cheese, rolls, pot of fresh mango, oversweet fruit juice and coffee – all included for my $20 – appeared by magic as usual. But, as usual, it must have taken hours of organising, unseen by me, with the hosts up early and queueing to buy the ingredients.

I spent most of today riding the Carretera Central, the main highway across the island. This section had a fair bit of traffic for Cuba, mainly lorries and buses. Occasionally I sidestepped off to the side gravel to let a pulse of vehicles past, but much of the day it was pretty quiet considering this is Cuba’s equivalent of the M1.

Here’s the back view of a horse and cart (pic). I don’t know what they look like from the front. I don’t go fast enough to overtake them.

Roadside stalls were few. I only went past two, snagging a fruit juice here and a cold milk there. 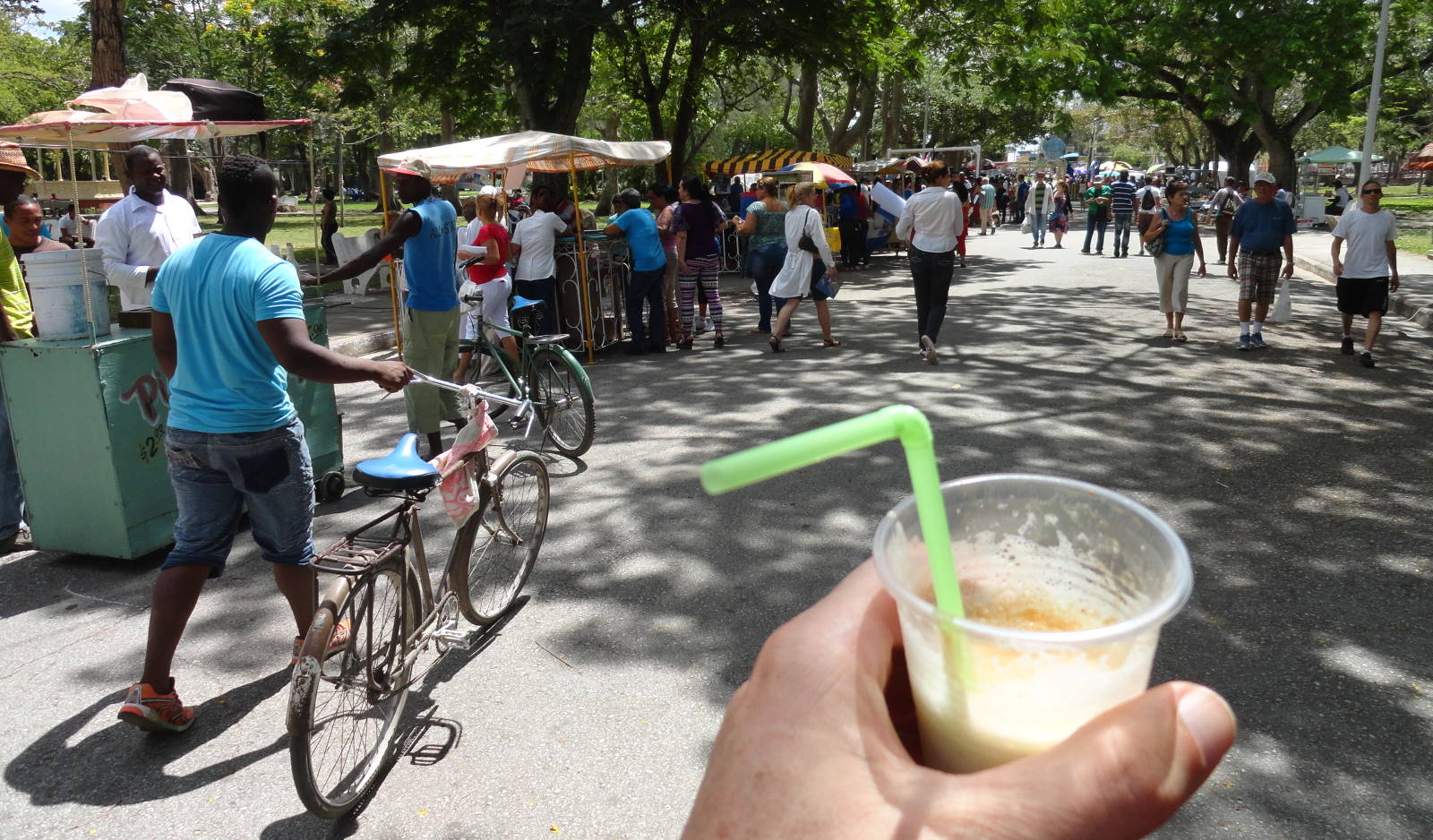 As usual I rode dawn-to-noon to avoid the afternoon heat, and arrived at Camagüey ready for lunch. At the Campesino, where a small but lively fair was taking place, I had a five-peso pina colada (pic) instead. I chatted to a couple of happy-looking families mildly curious about my laden bike. Sometimes Cuba just seems the nicest place in the world. 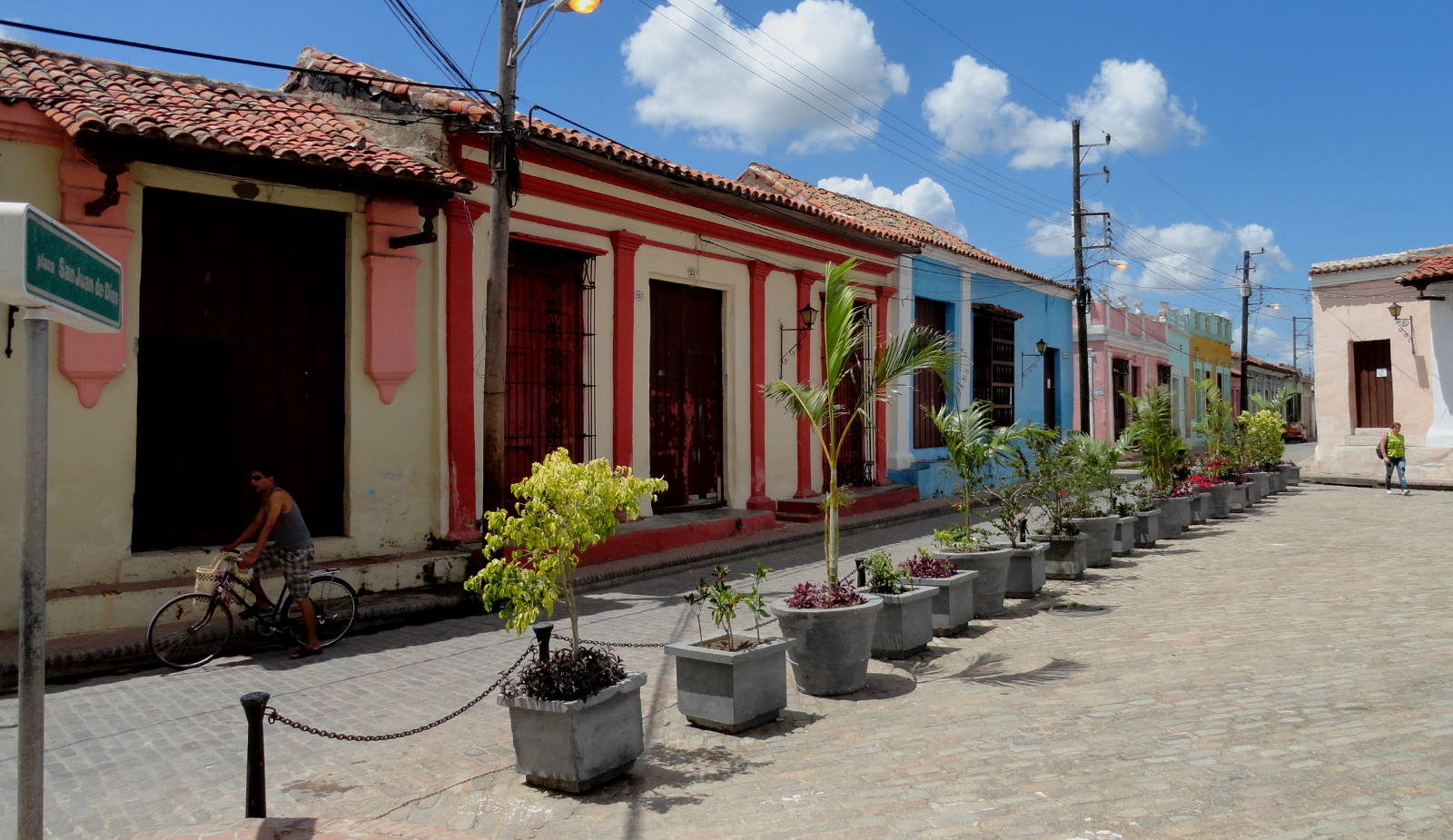 The Plaza San Juan de Dios is the sightseeing focus of the town, though it wasn’t quite as overwhelming as my guidebook suggested (pic). What it definitely lacked was anything to eat or drink, two items very much on my stomach’s mind.

My intended casa was full, but they recommended me to another, right in the centre, right above an Italian restaurant. Result… except it had no food. 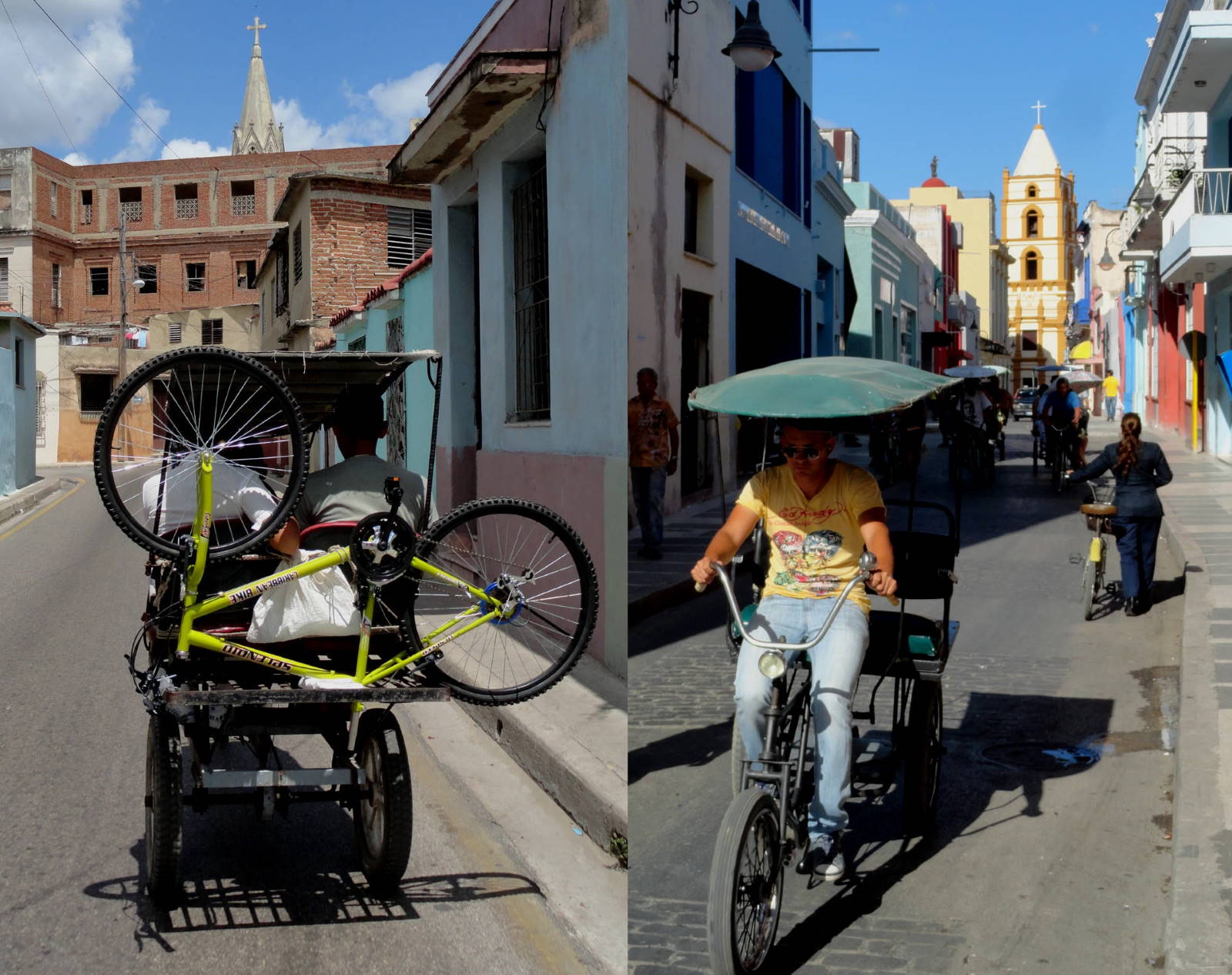 I checked in and walked around the centre to find something to eat. There were plenty of bike-taxi options (pic)… 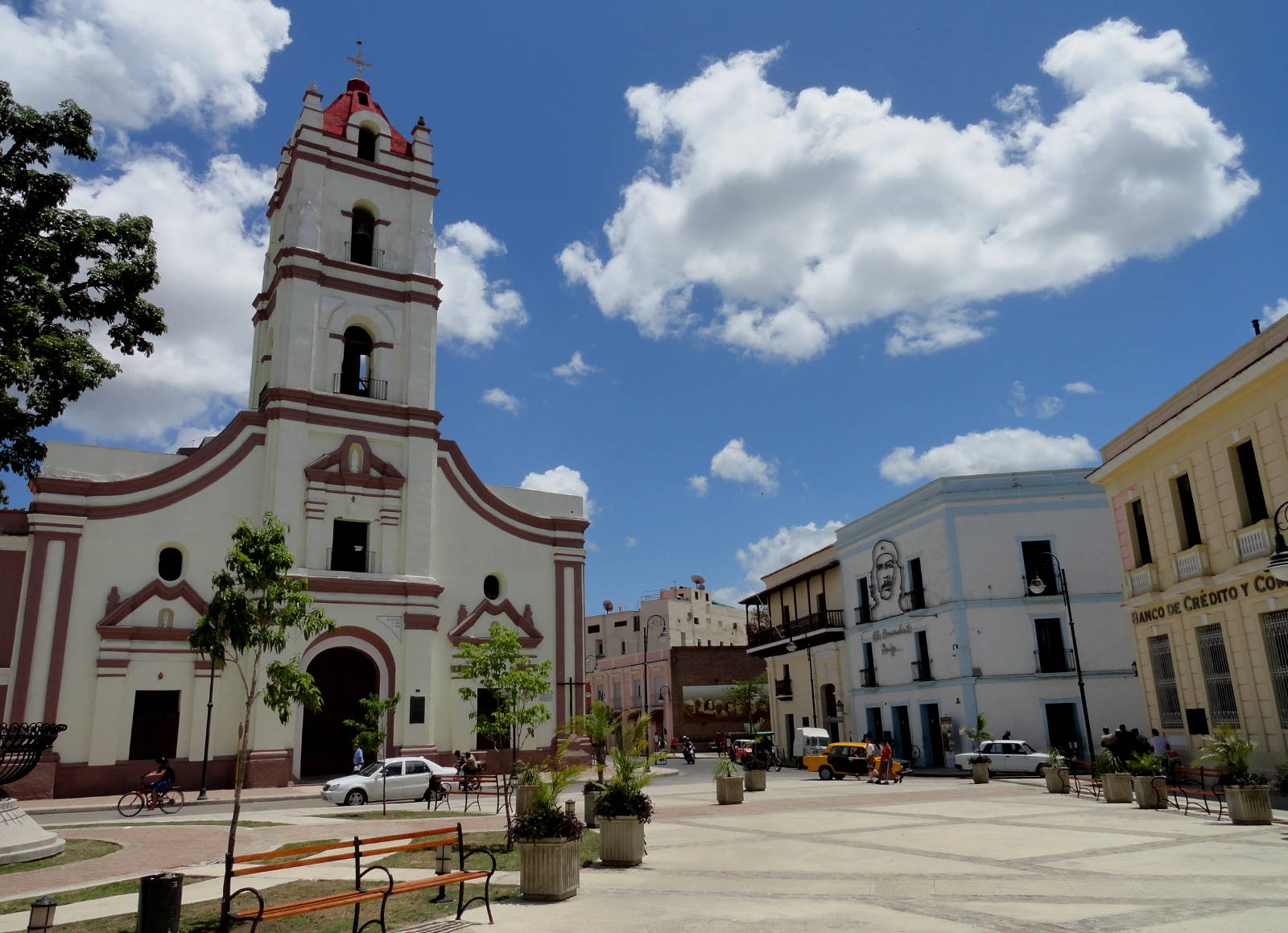 …and the pedestrian streets were the customary patchwork of colonial buildings, some beautifully restored (pic)… 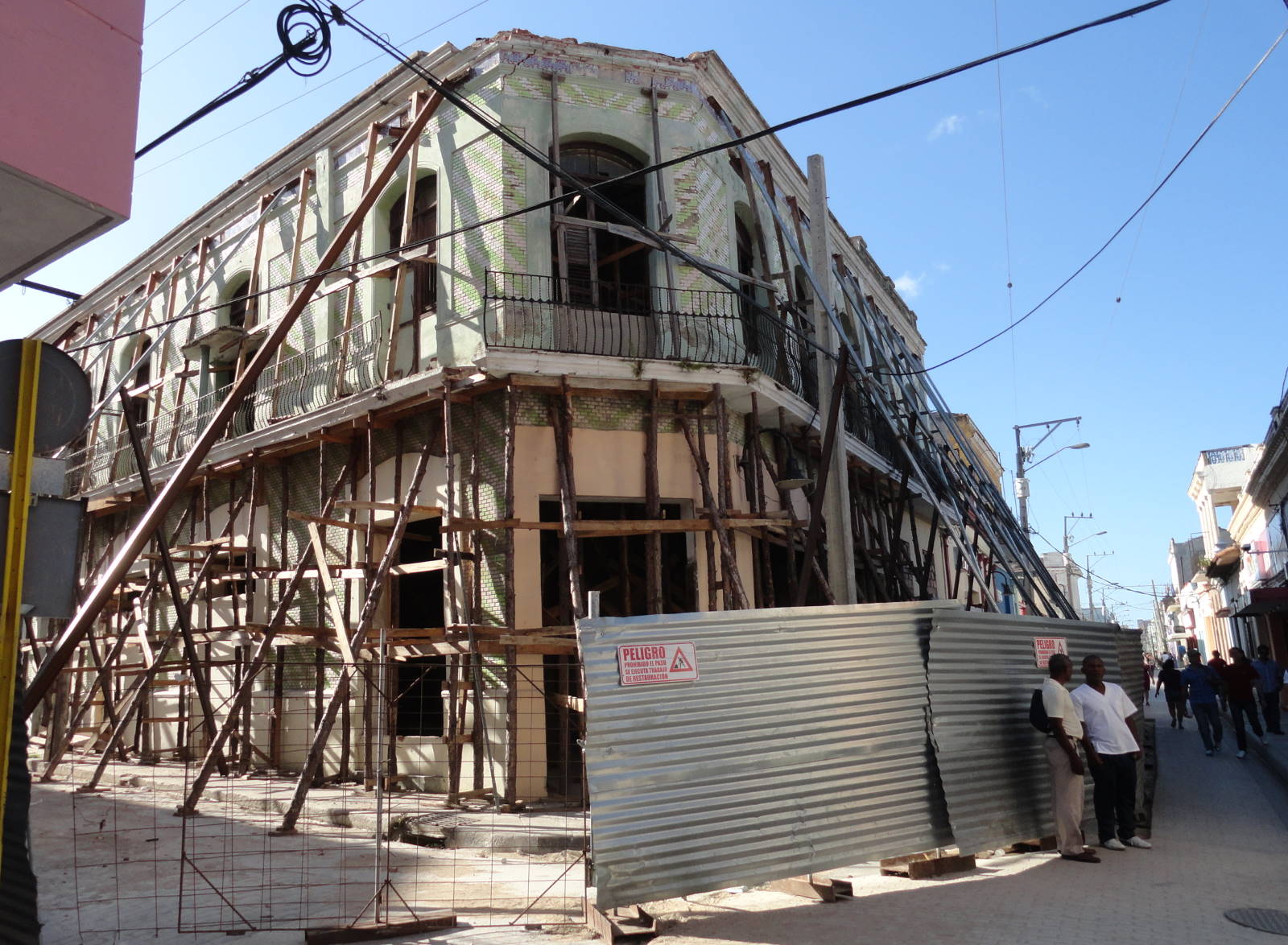 The great thing about cycle touring is how it takes you back to basics. All you really need for a happy existence is food, drink, shelter, plenty of charging points for your laptop and phone, and internet access. So despite being hungry and thirsty, I was delighted to find the first wifi of the trip in an air-conditioned hotel. 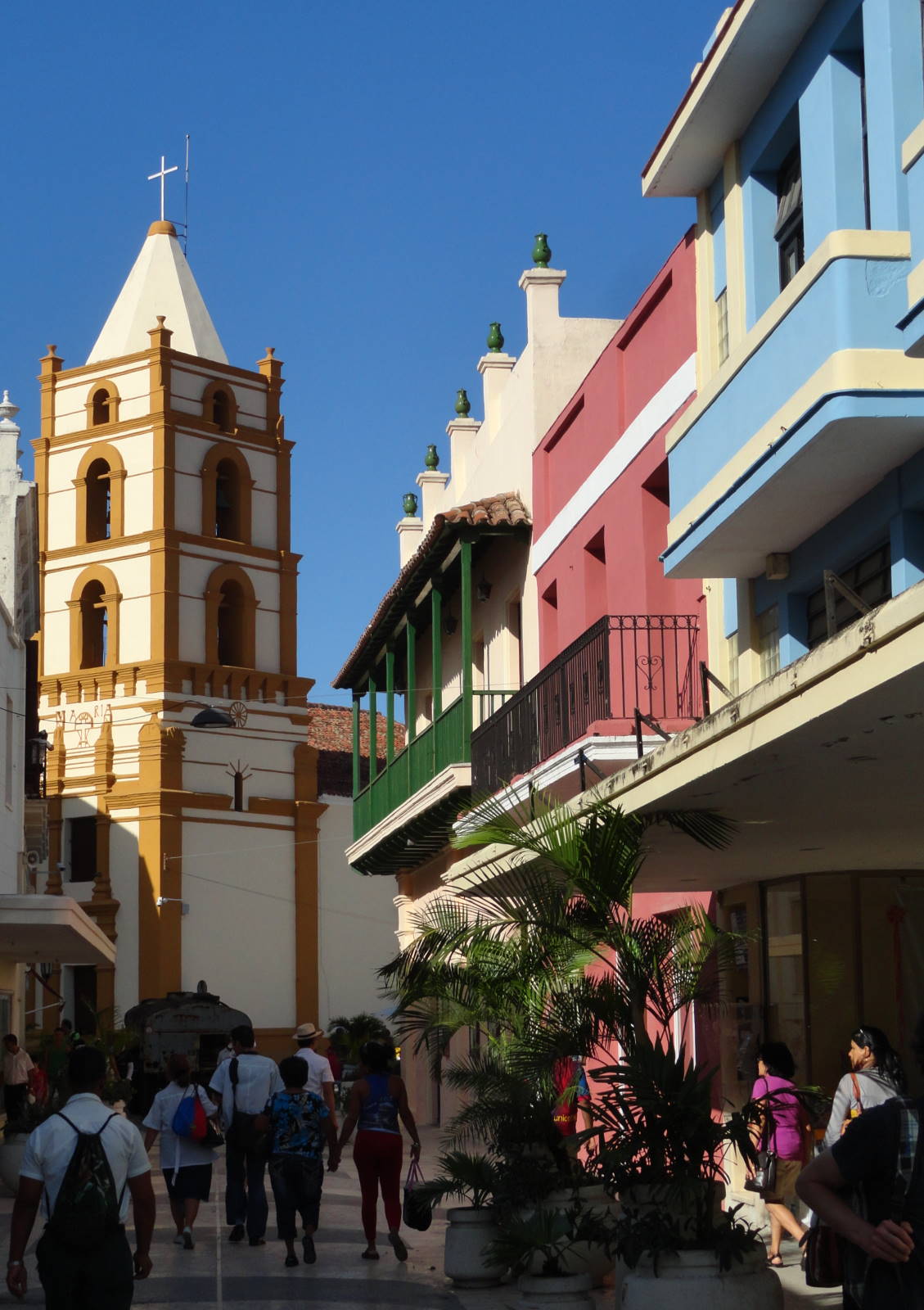 I caught up with emails and social media and justified a few beers on the basis that they came with free nuts, the only available edible item I had seen so far today. Good job my breakfast had been so big.

Now reconnected with the outside world, I looked in vain round town (pic) for peso places to eat – many restaurants were plain out of food, others clearly didn’t want customers. I eventually had a ball of fried chicken from a place up the top of a shopping centre. And a beer, to wash the taste away. Those nuts remained the only edible item I had so far seen today.

But things improved, with an ice-cream (three scoops in a bowl for 3.60 pesos!) at Coppelia (pic), popular with families. A pedestrian street took me to a football bar showing Real Madrid live, more evidence that baseball is being supplanted by the global footy behemoth.

I had a final beer or three at a stylish bar full of graffitied walls on the corner of the central square, Agramonte, the evening being marred slightly when another gold-digger hit on me. Still, chance to practise my polite Spanish. And when she still wouldn’t go away, my impolite Spanish.