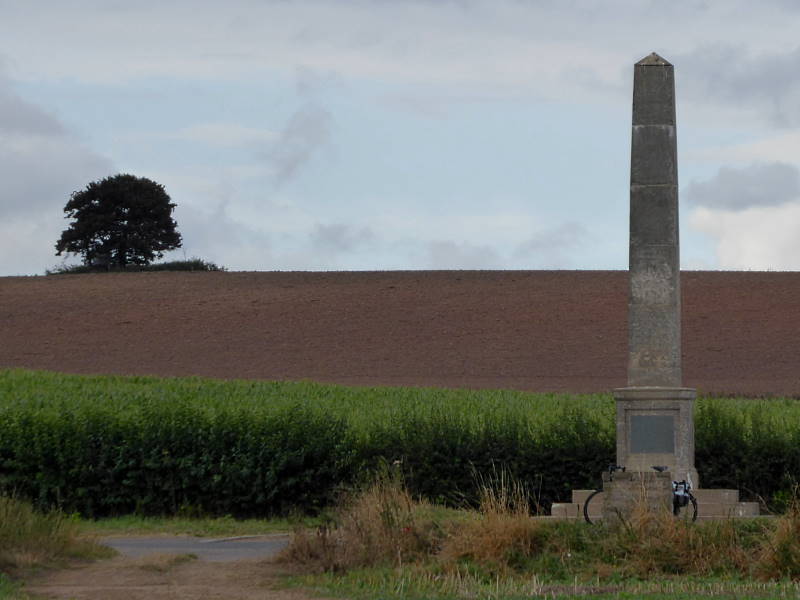 Three of Britain’s most decisive and pivotal battles were each fought a short bike ride from York, which probably explains it. I’ve previously ridden to Stamford Bridge, where in 1066 England beat the Norwegians before losing to the French at Hastings three weeks later. And I’ve been to Towton, a turning point in the Wars of the Roses in 1461, England’s bloodiest battle that resulted in 28,000 deaths.

So this morning I completed the set with the 15-mile round trip to Marston Moor, where on the conveniently rhyming 2 Jul 1644, Cromwell’s army defeated the Royalists in the English Civil War’s game-changing moment.

The route there takes you on a recently installed cycle path through Harewood Whin, an old landfill site. You go past a clay pigeon shooting range and through the village of Rufforth, where there’s a pleasant cafe-shop. You hardly have time to take the registration numbers of cars close-passing you, impatient despite it being 8am on a Bank Holiday Monday, before you roll into Long Marston.

The battle site is between here and Tockwith. The two sides faced up to each other across the road, which ran between the two villages then as now, Royalists (boo) to the north, Parliamentarians (hooray) to the south. There’s not all that much to see, but an obelisk marks the area of hostilities with a helpful information board. I was most interested to ride up a sandy farm track towards Cromwell’s Clump, on the ridge where Ollie’s army gathered to launch their assault on the Royalist scum.

The Parliamentarian advantage is clear from the ridge, and you can imagine Cromwell there over to the left, skilfully outmanoeuvring the Royalists, like a Puritan Messi in a tin hat. And I was also pleased to learn that you can see the Kilburn White Horse in the distance, on the hazy ridge of the North York Moors.

When I was a teenager I thought the Battle of Marston Moor, July 2nd 1644 was just a track from an ELO album. But standing on the ridge gave me a much better connection with the Civil War than any number of history lessons at school.

It all passed me by then, and I wasn’t interested, nor do I care much for it now. Though many of my friends loved it, and even devoted three years of their time at university to it.

ELO, I mean, not history. History is interesting. But only if I can cycle it.